Building, operating and maintaining a large model railroad necessarily has been an exercise in priorities.  With all of the labor supplied by just myself, I have constantly had to work on whatever I deemed highest priority at any given time.  With initial construction and operation, that list was obvious to me.  As the railroad matured, I shifted from track, wiring and initial equipage to other improvement tasks such as building and installing the three steel viaducts on the mountain climb.  That precipitated a major base terrain construction, as the viaducts (trestles) needed to be set into something.  That then led to the tunnels.  The base terrain was completed in January 2020, whereupon I turned to “industrial terrain”—structures in the Eugene and Springfield scenes.  Now that I have fulfilled my presentation obligation for the NMRA-PNR convention featuring those industries, I am turning to other deferred tasks.

In my past modeling, I always tried to properly weight rolling stock and apply at least a base of weathering to the finish before I placed it into service.  I did not have the time or energy for that with this layout as I first rushed to complete the mainline for the NMRA National Convention in Portland in 2015.  As described above, completing the trackwork and then operating the railroad were my prime concerns for a while, followed by the major scenery effort that set the scene. Taking a deep breath after the push to complete structures in Eugene and Springfield, I felt it was time at last to get back to the rolling stock.

As I have observed my railroad operating and as I handled cars during re-staging operations, I noted several cars seemed to be light weight.  This is an affliction of the current era of ready to roll freight cars.  In the past, with freight car kits, I added weight as a routine element of construction.  My preferred weight follows the NMRA recommended practice of one ounce plus a half ounce per inch of model length.  The typical fifty-foot car of my current 1984 model era should weigh about 4.5 ounces.  When I weighed a stock RTR car, I found it was a half-ounce under this weight.  That is not necessarily bad.  It is within a tolerance band for weight, but my observations of train behavior during operating sessions suggested to me a bit more weight might help. 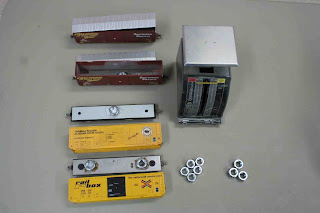 Adding weight to boxcars.  One or two steel nuts of about ½-inch size provides the desired additional weight.  These are installed into the cars with adhesive caulk.

One of the biggest challenges to my weighting program has been opening the cars enough to add the weight.  As seen in the photo, many “modern” cars have separate roofs.  This aids painting during manufacture.  Fortunately, most of these roofs have been removable, although it has taken careful work.  As seen with the top boxcar in the weighting photo above, some of the roofs were tightly glued in place or at least an end remained tightly fixed.  As seen in the photo, I was able to pry up enough roof to insert the steel nuts used for weight for most of these.  Other cars have a removable floor—just like the “Blue Box” kits of yore.  Most of these yielded to careful prying.

I still have several cars that refuse to yield an opening.  I will watch these in operation over time.  If problems develop or are observed, those cars may simply have to be retired.  A particular problem for which I have no solution yet is the fleet of 4650 cu ft covered hoppers I operate.  It appears I may be able to flow some sort of weight in through the access hole in the ends, but the car body will not open up without destroying the model.  These cars compound the problem by being even lighter than the boxcars (3.5 oz).  I have seen operational issues with some of them.  I will report later if I do find a weighting solution.

Another task I undertook with this fleet of freight car upgrades was to apply a weathering base.  After masking the wheels, I applied flat finish and then spray painted a light coat of “grunge.”  I may come back later to add further weathering, likely with pastels. 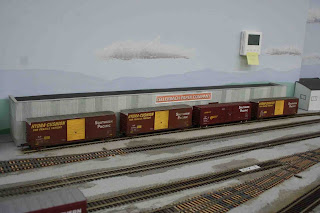 Enhanced boxcars at the Zellerbach Paper warehouse in my Eugene depot area.  The three yellow door cars got additional weight and a light coat of weathering “grunge” paint.

The weighting and weathering program likely will continue on a sporadic basis as time and motivation strike.  This first pass addressed thirty cars including several that I sought out.  Exactrail Southern Rwy. Pullman-Standard waffle side boxcars were very memorable for being involved in derailments at switches and being light weight.  They simply were memorable.  At least they proved easy to add weight to (roofs come off easily).  InterMountain covered hoppers are a different matter as noted above.  The freight car fleet upgrades will continue.

Posted by EspeeCascades at 3:34 PM No comments:

The National Model Railroad Association (NMRA) Pacific Northwest Region (PNR) held its annual convention in Eugene this May.  Originally scheduled for May 2020, as with so much of life, the convention was cancelled and ultimately rescheduled for 2022 as one of the first full in-person events as we came out of societal lockdown.

One of my regular crewmembers was the clinic chairman for this convention.  He long ago signed me up for a clinic presenting my modeling of the Eugene and Springfield area which would provide some local flavor to the regional convention.  Much of my layout construction (the track rework at “North” Eugene) and structure building over the past couple of years directly supported this clinic.  Preparing for such a clinic presentation provided the extra motivation I needed to tackle a number of projects in this area.

This blog has been full of descriptions of my model and layout efforts in my Eugene and Springfield scenes over the past couple of years.  The clinic presented in 2022 told a far more complete story through a number of case studies than would have been possible with the original 2020 schedule.

My clinic began with a brief photo survey of my entire railroad to place my Eugene and Springfield into context.  I then presented several structure examples in Eugene, beginning with the depot (blog posted in 2013: https://espeecascades.blogspot.com/2013/12/a-depot-for-eugene.html).  A couple of industries in the greater area of the depot were featured:

I then moved on to three more recent addition in the North Eugene industry area:”

I then turned to Springfield, again beginning with the depot.  I pushed hard to meet both an end-of-month blog posting deadline (self-imposed) as well as the need for the completed depot as presentation feature.  I used multiple pictures with the depot prominently showing to tell my tale of Springfield modeling.  https://espeecascades.blogspot.com/2022/04/springfield-depot.html  Industry highlights included:

Once again, the focus was on research resources used and construction techniques employed.

The convention was lightly attended—a disappointment for organizers and even attendees.  Still, good clinics were presented as noted in Tony Thompson’s blog a few days ago:  https://modelingthesp.blogspot.com/2022/05/another-nmra-regional-convention.html.  As with Tony, I greatly appreciated C.J. Riley’s talk on modeling realism.  I also caught one of Tony’s two clinics and piece of the other.  Jim Moomaw, one of my crewmembers and a fellow SP modeler, presented pictures and descriptions of the equipage of Dispatcher Offices over the past century.  In spite of the low attendance, I still made contact with and had great hallway and lobby discussions with several good model railroader friends, including one down from Vancouver, BC. 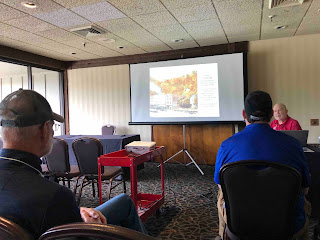 C.J. Riley presented many examples of items that contribute to model railroad realism—and some that distinctly distract.  Much of this came from C.J’s recent book for Kalmbach.

It was super to return to in-person conventions.  Much more goes on at a convention than the formal program of clinic presentations, model contest, or layout displays.  The people connection is vital.  As a presenter and as an audience member, I found presentations livelier and more informative when presented in-person.  The interaction between presenter and audience is vital and is not easily replicated in an on-line environment, as we have seen over the past two years.  I will be glad to see fellow hobbyists at my next convention!

Posted by EspeeCascades at 2:29 PM No comments: