With track laid, wired and controlled, the next task in this area between the Eugene depot and the Arrival-Departure Yard was to begin populating the new industry spurs with industry structures.  First up was the nominally easiest structure—Eugene Freeze.  I chose to bash a pair of Walthers Cornerstone kits for their “R.J. Frost Ice and Storage” (933-3020).  I try to avoid using the very recognizable Walthers kits without modification.  In this case, all I did was extend the length of the building, leaving it very recognizable yet.  Still, I like the looks of this structure.  It fits most areas of the country, a common problem I otherwise have on the West Coast. 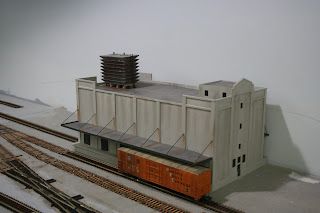 The straight-forward modification for this kit structure extends it by doubling the middle pair of panels.  This was accomplished by making cuts on either side of the joining pillar.  Note to self—double-check which side of the pillar to make those cuts!  Dimensional control for the joints was achieved by measuring between the holes for the awning supports. 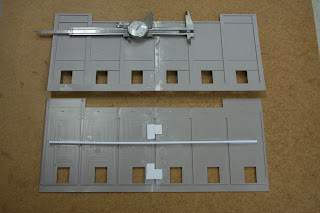 Building wall splices.  The caliper was set to the distance between holes for the awning supports in the middle of the pillars.

Once the long walls were joined, the rest of the construction proceeded per the kit instructions.  I needed to remember to prepare enough parts like the loading doors for the extended structure.  I also spliced parts for other parts affected by the longer side walls such as the roof, loading docks, and awnings.  The site for this structure on my railroad is not as deep as required for the full Walthers kit as designed with full awnings on both sides.  I chose to scratch build a narrower awning for the back side.  I may yet need to trim this awning and the rear loading dock. 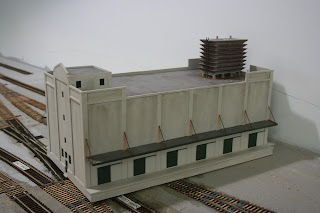 Structure finishing used various paint “rattle cans.”  The Rustoleum “Chalked” line is particularly useful as are various primers as they dry to a nice flat finish.  I followed up with AIM weathering powders.  Final assembly proved a challenge of maneuvering the structure and holding it as glue set.  A lot of the final assembly was done with canopy glue.  I remain undecided on the structure sign, so that will come later. 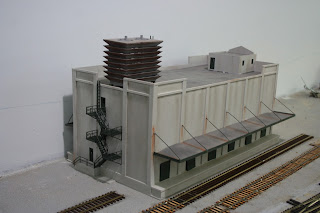 The first of the industries for the six new spurs has been placed and is ready for business!