FLESHING OUT THE EUGENE LOOP TRACKS

I have expanded the Eugene Arrival/Departure Yard to twelve tracks per my design.  These are reverse loop tracks.  I have been slowly expanding this last key part of the railroad with first a single loop track for the “Golden Spike,” then expanding to six and then seven tracks for full mainline operations.  All twelve tracks are becoming important, though, as I start forcing the issue to have all trains depart from the “Arrival/Departure” Yard, as designed. 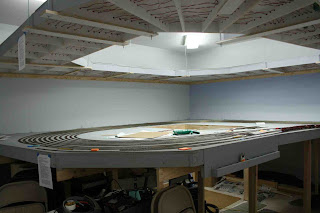 The inner loop track (Track 12) has a gap in its middle right now.  I must complete building a turnout and install it for access off this track into the diesel fuel and sand facility.  That facility will be along the “right side” of the loop.  Laying the switches and tracks for that facility is the immediate next project.  With switch machines installed and track and machines wired, this will finally move the arrival and departure operations down into this area. 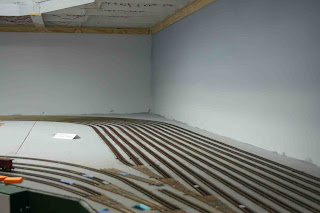 “Right” side of the Eugene Arrival/Departure Yard.  The diesel fuel and sand facility will go in the open space to the left of the twelve loop tracks.
Posted by EspeeCascades at 11:33 AM 1 comment:

Coming back after a “vacation” from the model railroad following the NMRA National Convention in August, I held the fifth operating session using the full mainline November 7.  We had a full crew of twenty on hand.  Based on the convention operations session (ops session 4), I concluded the layout could absorb up to twenty operators.  From my initial call list, I received several additional requests for invites.  Figuring I could use up to twenty folk, I agreed and made those invitation additions.  This railroad has become living proof of the statement: “Build it and they will come.”  I had no idea it would happen so quickly!

The wonderful operations organizing assistance provided by former SP Dispatcher Rick K. made it possible to keep everyone fairly busy.  In addition to crew training—Dispatchers—Rick added a Crew Caller position.  I have envisioned this role belonging to my “Santa Clara Tower” operator position, but it helped to have an additional person performing this role.  We used two-man train crews—a conductor and an engineer.  Two-man crews helps with the communications load and provides for two pair of eyes watching the ends of the train.  I had always figured two-man crews would be good with the local switch jobs, but we have seen it is useful with the road crews, as well. 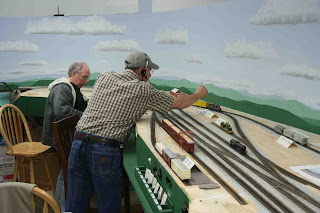 With the Crew Caller position created, we could manage crews off of several “Boards.”  The first was the regular road crew board for the road freight trains.  A second board was set up for Amtrak and the helpers.  Both of these jobs were declared to be single man crew jobs.  An “Extra” Board had crews that could be called when the regular road crews were fully engaged or if the helper and Amtrak Board needed augmentation.  Additional jobs on the railroad included the Eugene Yard crew: Yardmaster, west and east switchers and the Santa Clara Tower Operator.  Finally, we had a Dispatcher (plus a trainee or observer), the Crew Caller, and finally, the “Superintendant”—me!  Especially true of large model railroads, but also very true of most any model railroad in its infancy and development, the layout owner ends up taking care of all sorts of tasks (trouble-shooting) and providing overall direction or explanations.

The railroad was quite busy throughout the session.  A few crews got stuck in sidings for a while, but that is real railroading.  One helper engineer noted he made six trips up and down the mountain! 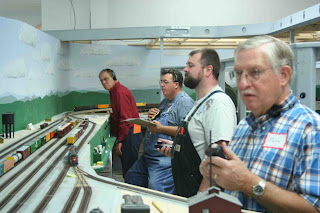 A meet at Oakridge.  Jim M. looks at Oakridge as his RR-East train descends into town behind him.  Greg. P. has a RR-West train in the yard (yard track four) waiting for the RR-East train to clear so he can pull out into the Salmon Creek block and have his helper entrained.  Helper Engineer Jordan D. is pulling his helper power set out of the Oakridge engine facility.  John B.  is the engineer for the Oakridge Turn, still working in the yard with cars on yard tracks one and three. 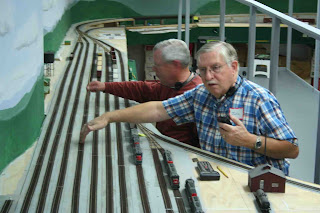 An earlier view at Oakridge with the Oakridge Turn crew of Mike B. and John B. strategizing on how best to get their work done. 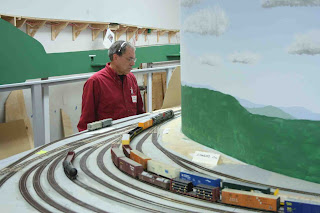 Jim M. looks on as his train rolls through the RR-East end of Oakridge. 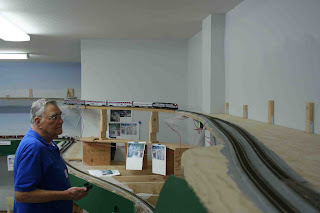 Meanwhile, up on the Hill. Dave C. guides Amtrak Number 14 down grade toward Cruzatte. 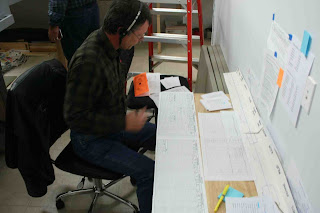 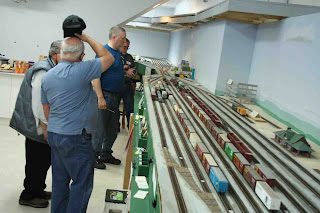 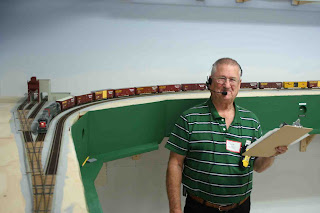 Former Conductor Dick K. reprises that role on my railroad as his train drifts down through McCredie Springs. 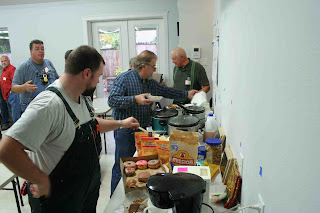 The important mid-session break for “beans”—literally, as we usually serve chili. 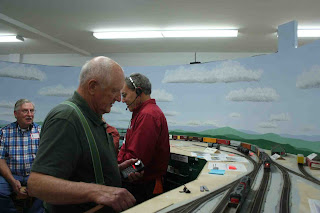 Engineer Gene N. guides his RR-West train into RR-East Springfield as his conductor, Jim M. confers with the crew of the Oakridge Turn.  The Oakridge Turn is on the Springfield siding and awaits the passage of the westbound train.

By late afternoon, we had a happy but tired crew.  Though there are potential schedule issues during the holiday period, the crew strongly desires continued operations.  It brings me great joy to have a large group of folk arrive to help bring my vision into reality, especially for the “raw” state of the railroad.  I have mostly built it and they are coming!

Posted by EspeeCascades at 8:36 PM No comments:

A significant construction milestone has just been achieved.  My trusty compound miter saw, which also serves as a chop saw, has been removed from the layout space!  Layout construction has progressed to the stage where I no longer need or want the saw nearby in the basement.  Remaining saw cuts (and I am sure there will be many) can be handled easily up in my garage shop.   In the meantime, I very much desire to remove a major source of sawdust in the layout space.  Layout constructors among my readers will well understand this is a significant moment along the path to a “complete” model railroad.

I have my first full operating session with my local crew since the NMRA National Convention scheduled this coming weekend.  I need the space formerly occupied by the saw as crew space.  We are well into Fall in Western Oregon, so we will not be using the outside patio as crew space as we did during the summer.  Further, the long-planned-for kitchenette is moving along toward use.  All of the base cabinets have been assembled and placed.  They now await the countertop (ordered) and sink installation. 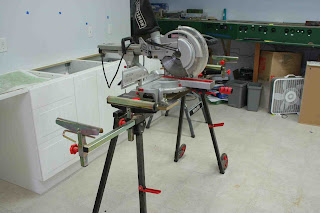 Compound miter saw in its habitual location for the past three years. 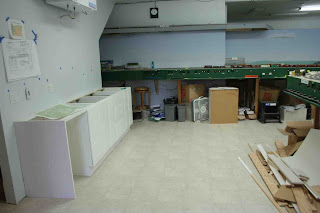 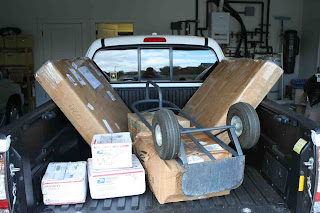 Layout Design SIG materials packed for shipping for next year’s  NMRA National Convention.  Other than the convention, these have occupied key space in my garage for the past year-plus.  Another milestone!  This needed to be shipped to make way for the saw.
Posted by EspeeCascades at 3:51 PM No comments: