THE EDGE OF THE WORLD

Continuing tasks deferred during the final push leading up to the NMRA National Convention, I finally completed installing fascia around the entire layout.  This was a cosmetic task that I would have liked to complete prior to the convention.  Alas, higher priority tasks claimed what time and energy I had this past summer.

Four major areas remained without fascia:  the area around Westfir, the Salt Creek trestle area opposite Westfir, the “Pryor” area between Salmon Creek (outside Oakridge) and McCredie Springs and a final surprise—the Willamette River bridge scene between Eugene and Springfield.  That last one was surprising because the basic scene has been featured in a number of photos of the layout.  I just had not completed fascia across the gap underneath the river surface.

The Westfir fascia needed to be a little deeper than my standard fascia for flat areas of the layout.  I introduced a small rise and descent in this area for the mainline so the Westfir spurs would descend sharply from the mainline.  As simple a requirement as that slightly deeper fascia was all it took to delay that project.  In addition, I needed to work around roadbed support while installing the switch controls for Westfir.  All of that has been accomplished now. 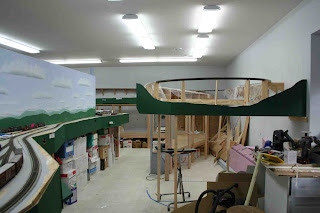 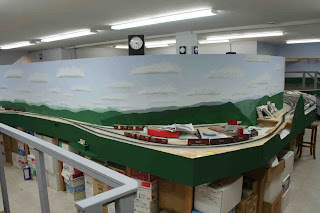 Westfir fascia.  An oversize fascia hump has been installed for the ridge and tunnel that will separate Westfir and Oakridge, as seen on the right.

The fascia coming into McCredie Springs needed to be solid and curved.  I used ¼ inch thick hardboard for this area rather than my usual 1/8 inch hardboard.  This required good bracing and mounting points on the benchwork.  Further, I secured this panel with flat-head screws.  The mainline will go through Tunnel 21 as it enters McCredie Springs.  Right now, the fascia appears a bit truncated on top.  I am prepared to splice additional material on top of this when I do the actual scenery work.  This fascia region extends all the way back to Oakridge and includes the Salmon Creek area and the front of the Pope and Talbot lumber mill. 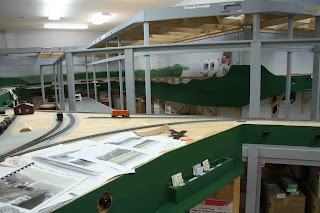 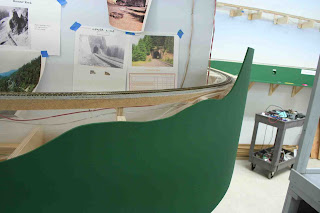 Curved fascia panel for Tunnel 21 leading into McCredie Springs.  Prototype photos are taped to the wall. 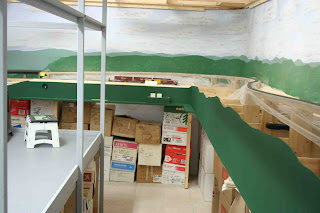 The Pope and Talbot fascia is lined with a shelf. 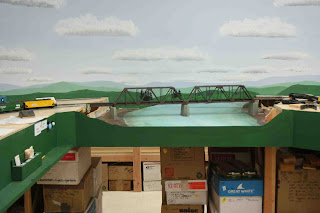 In a final non-related note, ordinarily I would be reporting on the just-concluded Annual Convention of the Southern Pacific Historical and Technical Society, held in Sacramento, October 7-10.  This was a grand affair including a special event Thursday evening at the California State Railroad Museum, celebrating 150 years of the Southern Pacific.  We had the run of the museum, which was much appreciated, as I finally got up into the cab of the last cab-forward, SP 4294.  That is one of many focal points of the museum.  Good presentations were heard during the day on Thursday and Friday.  Friday evening and Saturday afternoon featured several fine layouts on tour.   Unfortunately, my camera took this event to corrupt the image data as I near filling the memory card.  Should I succeed in recovering those files, I will post more about this event later.

Meanwhile, I have returned to my layout with renewed energy after recovering from this summer’s NMRA convention focus.
Posted by EspeeCascades at 7:43 PM 2 comments:

Every once in a while, a project that seems to be simple turns out to be anything but.  Such was the case for my long-delayed hook up of the Cascade Summit wye.  In concept, this should have been no different than the installation of components for the Oakridge wye—a task accomplished a couple of years ago.  Instead, the new installation at Cascade Summit lead to a couple of weeks of frustration as I tried to understand why the same auto reverser used for Oakridge would not function at Cascade Summit.


In both locations, I use an OnGuard Auto Reverser.  The auto reverser is connected just to the tail track, the wye switch, and a few inches of wye leg tracks.  The Oakridge installation has been working flawlessly for a couple of years.  Why would the new installation at Cascade Summit not work?

I did continuity checks, voltage checks, using an RRampmeter (DCC voltage and ammeter) and tried bringing the power for the wye tail section from the nearby wye base and leg circuit rather than a separate pair of leads from the station panel terminal block.  I even tried reversing the power leads to the auto reverser.  All that did was change the leg of the wye that would work.  A board swap, prompted by the DCC Specialties folk just had the Oakridge installation still working and the Cascade summit installation not working.

I did note a slightly different form factor (board width) and a couple of other detail differences between my older PSX circuit breaker boards and the much newer ones installed for Cascade Summit.  I also noted a change in the instruction package for the PSX between my earlier breakers and the new ones.  Something had changed.  Finally, a desperate e-mail to DCC Specialties, sent over the weekend, netted instructions on setting the PSX trip time.  Kudos to them for a Sunday response!!!!

After considering my options, I elected not to change the PSX circuit breaker trip time.  I will reserve that for the future, should I encounter further problems.  Instead, I swapped the old PSX boards at Springfield (my original installation) for the boards at Cascade Summit and McCredie Springs.  The combination of the old PSX boards works with the OnGuard Auto Reverser.  I now have that set up at both Oakridge and Cascade Summit.  It works!!!

The pictures below will show ways to identify the various circuit boards on my layout. 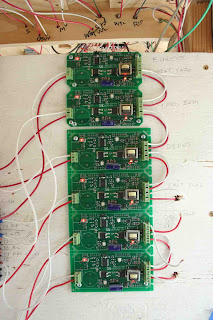 PSX circuit breakers for Eugene and Oakridge.  Two new breakers are at the top of the stack.  The other four are older, purchased in 2012. 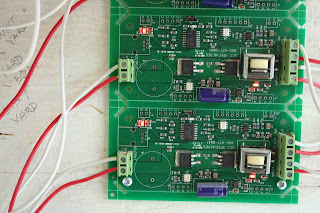 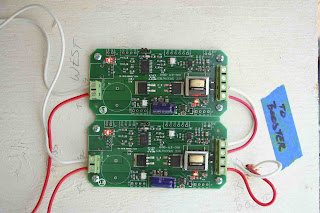 New PSX circuit breakers now installed at Springfield.  Note the “ET” brand in a circle silk-screened in the lower left corner of these two boards as they are mounted.  The mounting is inverted, so the “ET-in a circle” mark would normally be in the upper right corner.  These were the boards that caused me problems with my OnGuard Auto Reverser. 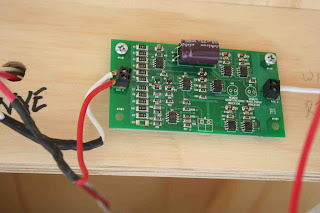 OnGuard Auto Reverser installed for the Oakridge wye.  Ooops.  It looks like I pulled out the red wire leading to the wye tail track on the right! 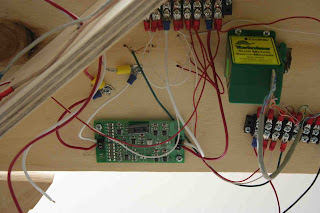 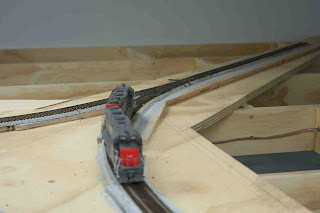 Test power on the RR-East leg of the Cascade Summit wye. 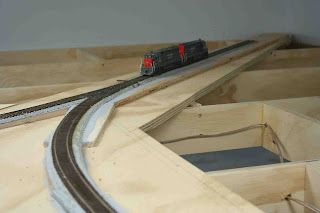 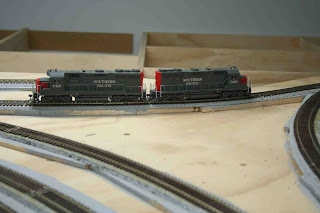 Test locos have come out of the wye and are on the RR-West leg of the wye.  Very sharp eyes will find the lead axle of the rear truck of the rear loco, SP 7428, is over one of the rail gaps for the wye.  Note that the headlights are on, so the auto reverser has done its work.

This was a long tale about what should have been a simple installation.  In fact, it took me more than two weeks with daily trouble shooting efforts to finally resolve the issue.  “There be dragons” out there!

Posted by EspeeCascades at 8:20 PM No comments: