With the central core of the railroad being used for test operations, the time has come to begin the next major construction phase.  Though conventional thought might begin expanding from the existing layout, I am turning to the upper level: Cascade Summit and Crescent Lake.  These stations will benefit from construction now while I still have full access to the floor below.  This is particularly true of Crescent Lake which will be suspended from the ceiling.

I began the upper level construction phase at Cascade Summit as it has relatively more conventional benchwork.  I’ve described and diagramed how Cascade Summit hangs out over the top of the layout below.  Now I can show pictures of this construction.  The overhang, a form of “mushroom” layout design, resolves the space needed for the summit wye.  It also separates operators on the two levels. 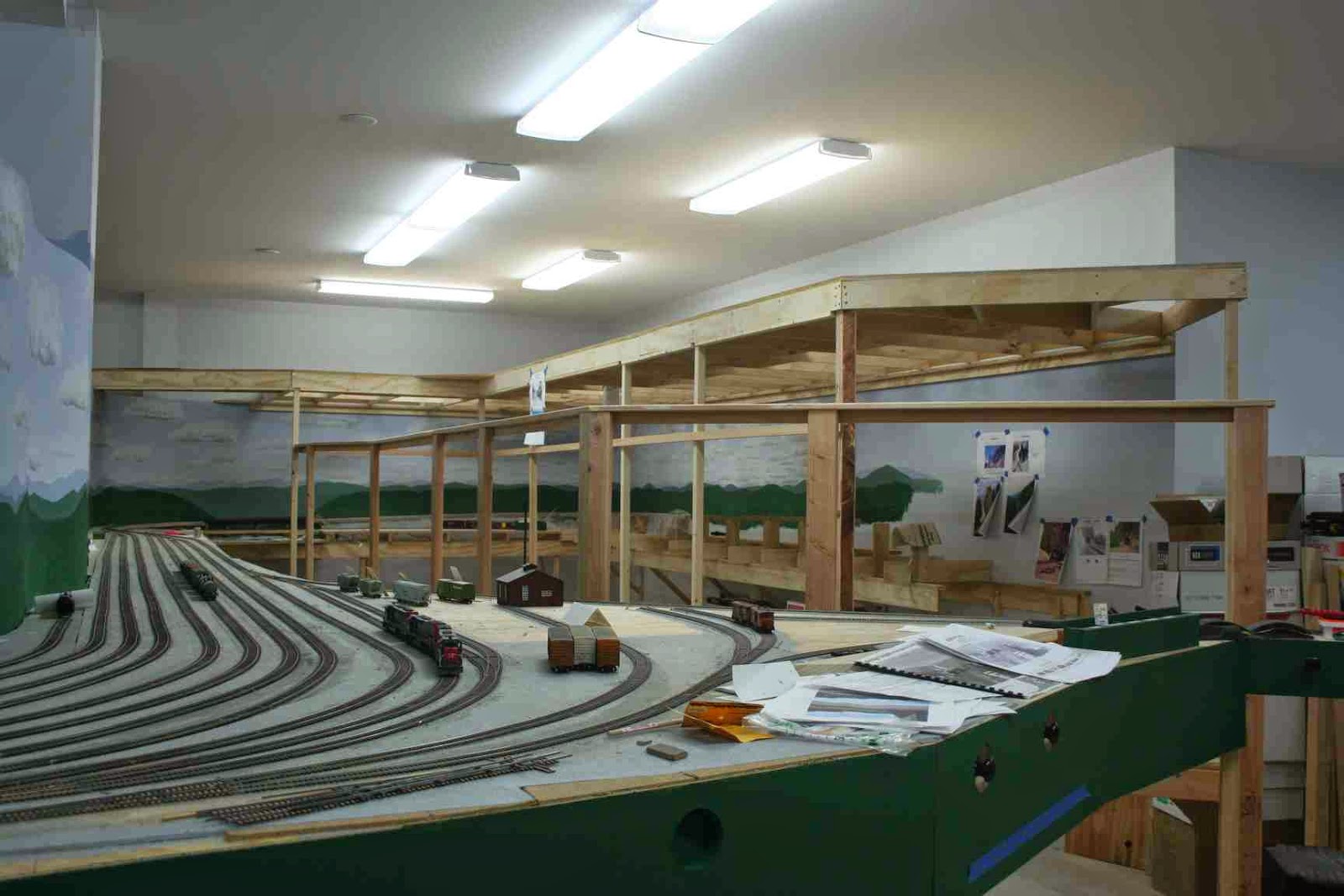 Cascade Summit benchwork high on the wall.  Platform railing is in the mid-distance.

A 30-inch-high operator platform was built for the Cascade Summit operators.  This channels operators on the main floor level into a path directly following the track at the base level and initial mountain climb.  The three feet wide platform provides ample space for operators at Cascade Summit.  The platform to subroadbed height is 60-inches.  This height maintains a platform to ceiling height of seven feet—a design goal for those of us taller folk.  Stools will be provided for operators and a platform lip will prevent those stools from sliding off the platform. 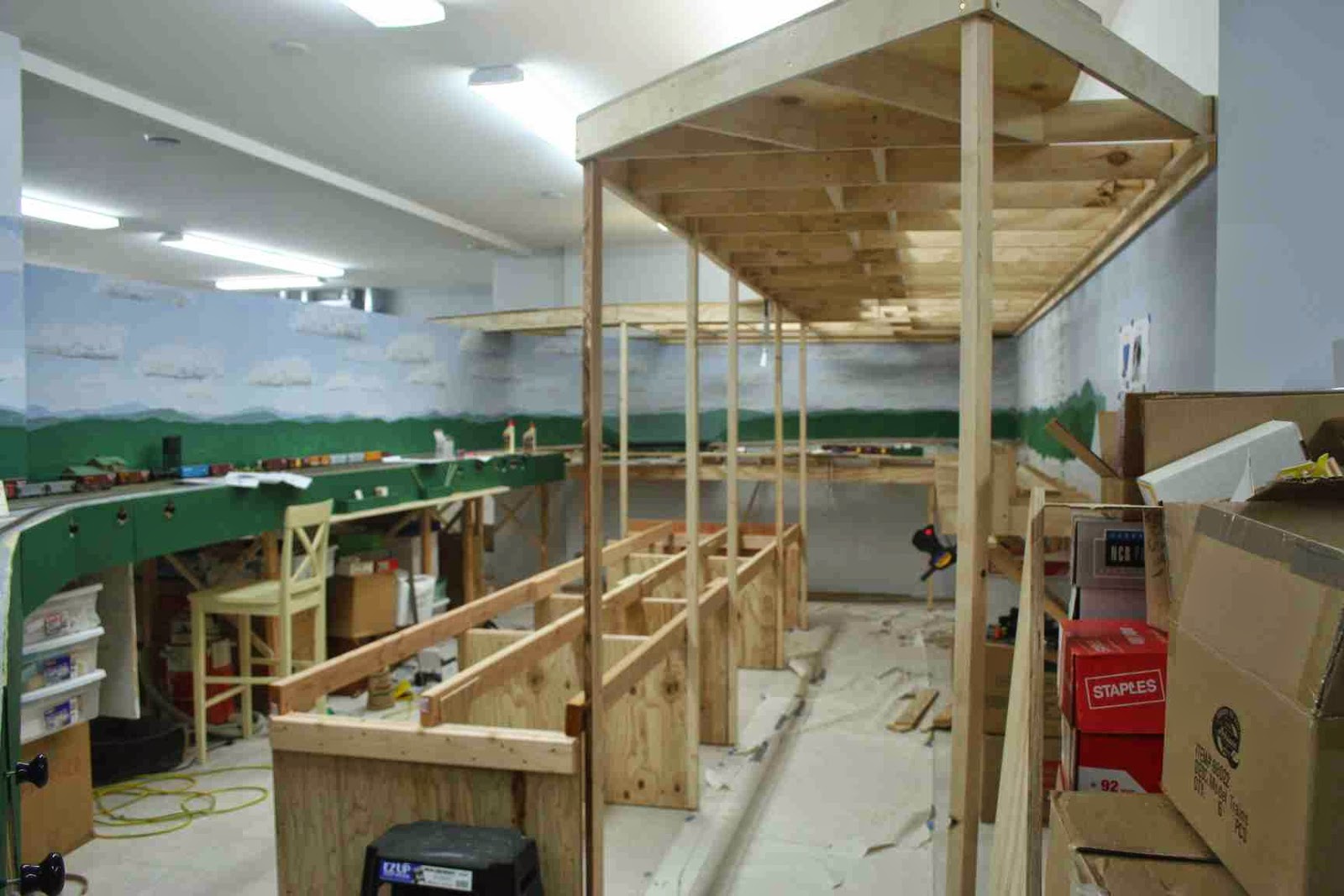 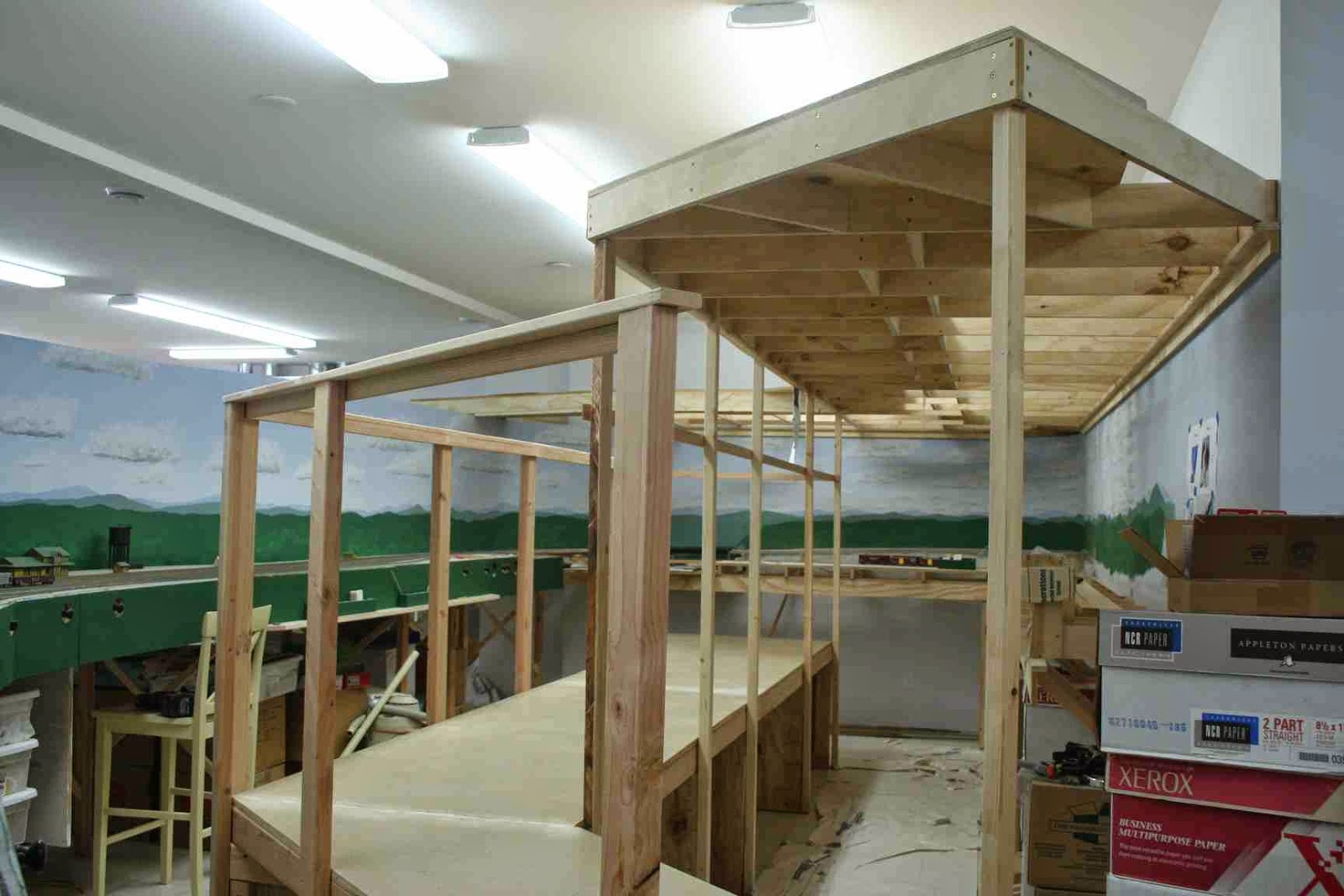 A modest but stout handrail surrounds the operator platform. 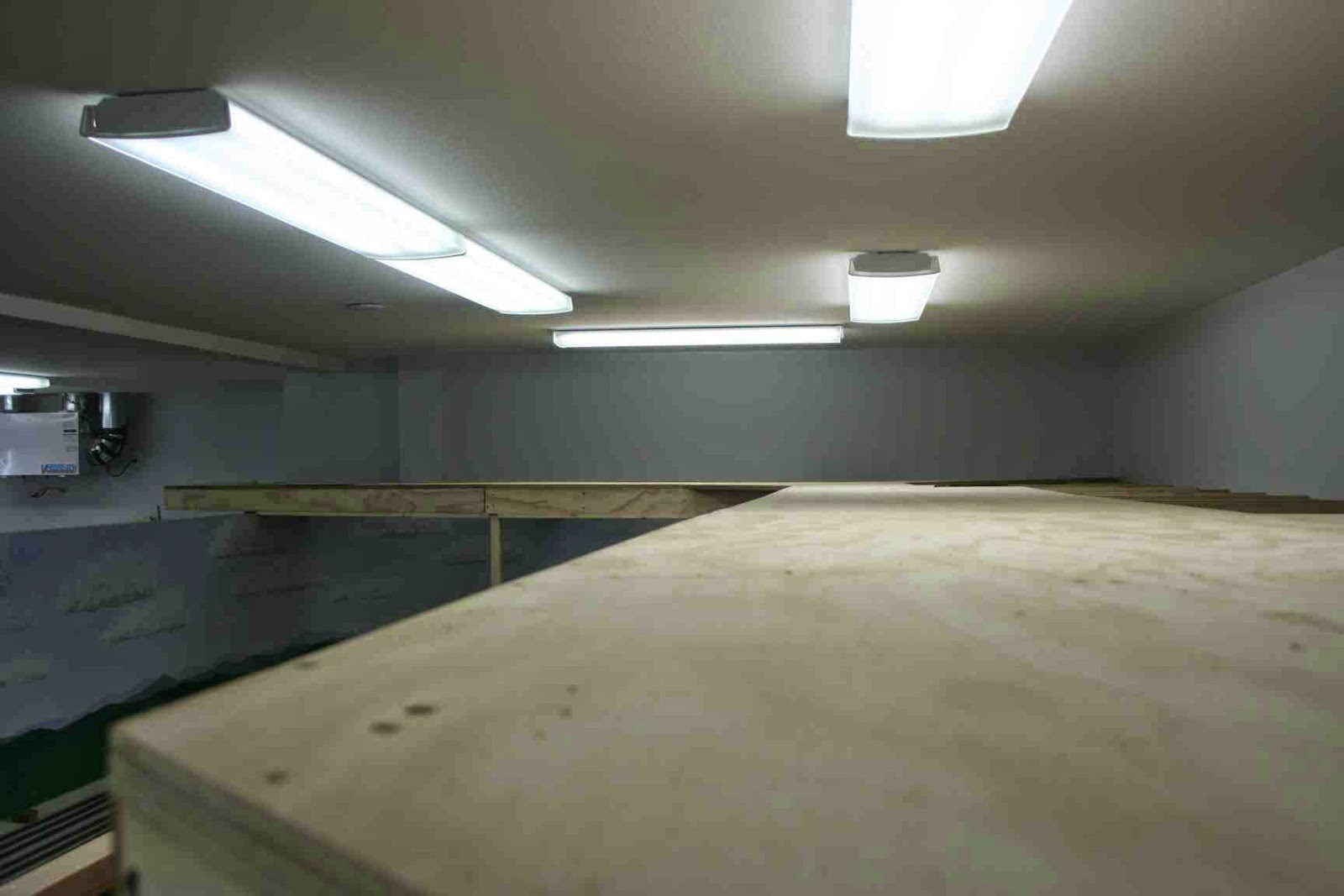 Cascade Summit subroadbed.  Roadbed for the summit wye extends into the corner.

As illustrated in the track plan and Cascade Summit track schematic, my Cascade Summit will go through a couple of ninety-degree bends.  One of those track bends will form the base leg of the wye.  The Cascade Summit wye was used for turning steam locomotive helpers and snow removal equipment.  It was unique as the tail of the wye was in a single-ended tunnel.  The tunnel portal was just beyond the wye switch.

RR-West of Cascade Summit, my mainline will sweep through another ninety-degree bend to swoop out over the RR-East end of Eugene, hug the wall through the pass-through under the house stairs, and head into Crescent Lake which will be my upper level staging.  You can see the roadbed hanging out over the backdrop on the left side of the photo above. 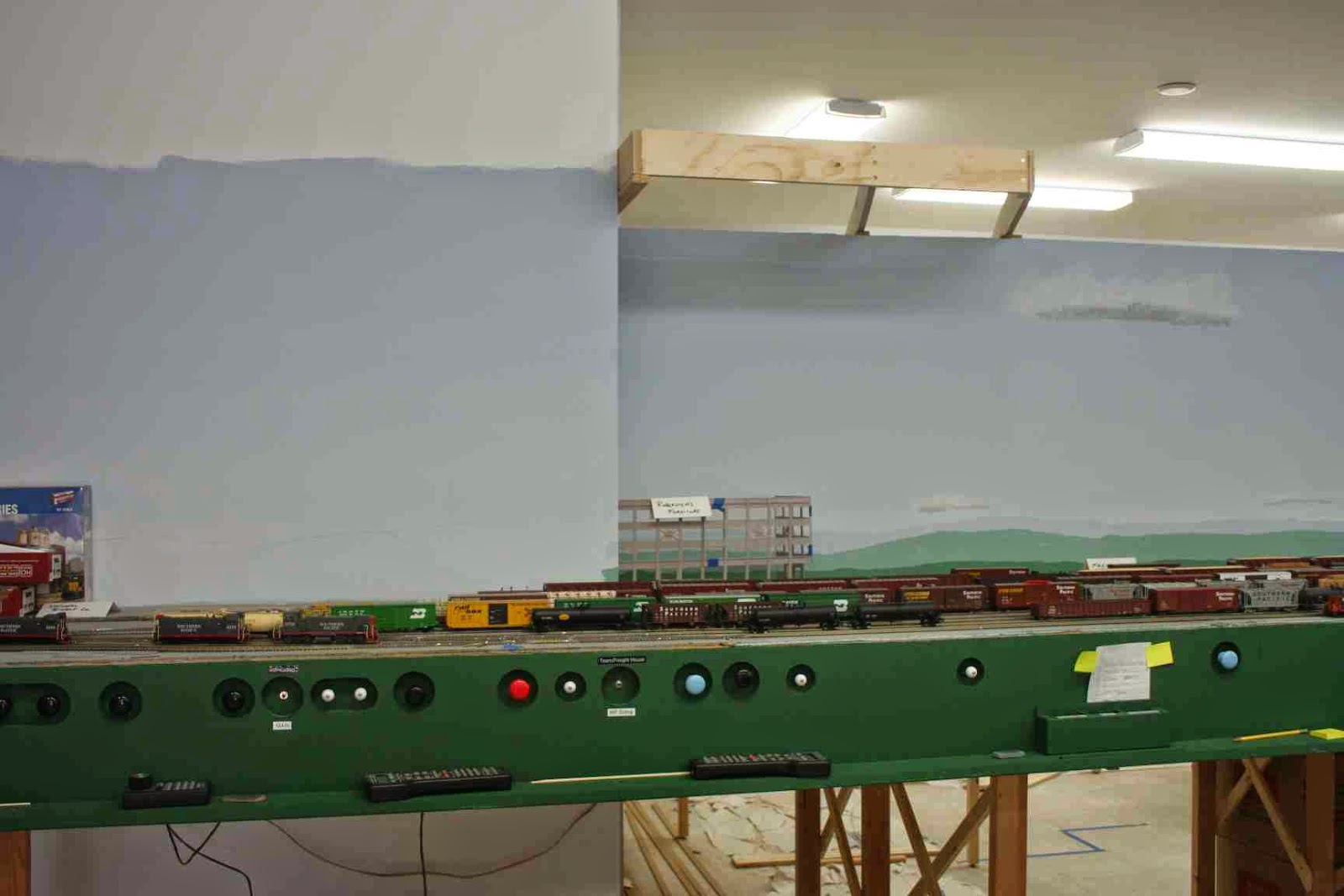 Benchwork for RR-West Cascade Summit extends out over the top of the RR-East end of the Eugene Depot area below.

Benchwork construction is an exciting time, as the physical plant for the railroad begins taking shape.  The upper level construction on my layout is even more exciting as it includes features that resolved important design issues of access without direct operator conflict for two levels of layout.  Onward and upward!
Posted by EspeeCascades at 7:13 PM 1 comment:

SPURRED ON BY OPERATIONS

We just conducted the second test operating sessions on my SP Cascade Line.  I brought back my original crew of four testers to both confirm (and deny) that fixes from the first session were completed and to move on toward a more complete operational concept.  http://espeecascades.blogspot.com/2014/03/first-flight-ops.html
I’ve been working to get the gauge set correctly at the points on my FastTracks switches.  My construction technique has been a bit faulty there, so I’ve had to work on broadening the gauge a bit.

The major emphasis for the second operating session was the introduction of car cards and waybills to guide car movements.  The car card boxes were heavily used as the classification yard broke and created trains according to the waybills.  Three local freights pulled cars from industry spots in their zones and spotted new cars. 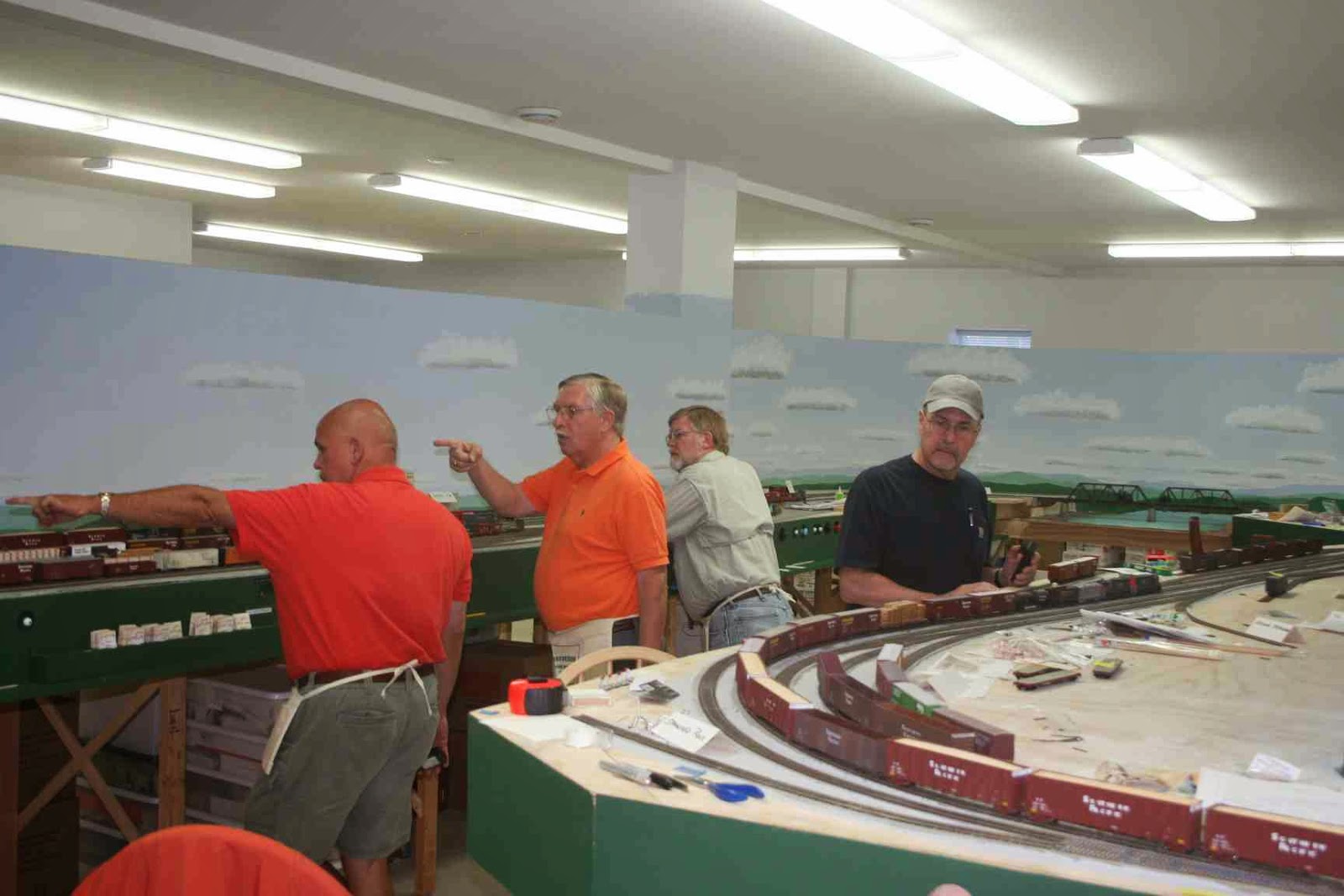 Second Test Operations Session.  Rick A. and John B. are discussing a switch move at Eugene, while Eugene West Switcher Joe B. awaits a decision.  Meanwhile, Dave H. brings the Oakridge Turn back through Springfield.

Four new spurs were added, with at least one at each of the three stations currently on my SP Cascade Line.  All were important to the developing operating plan and were used by those three local freight crews. 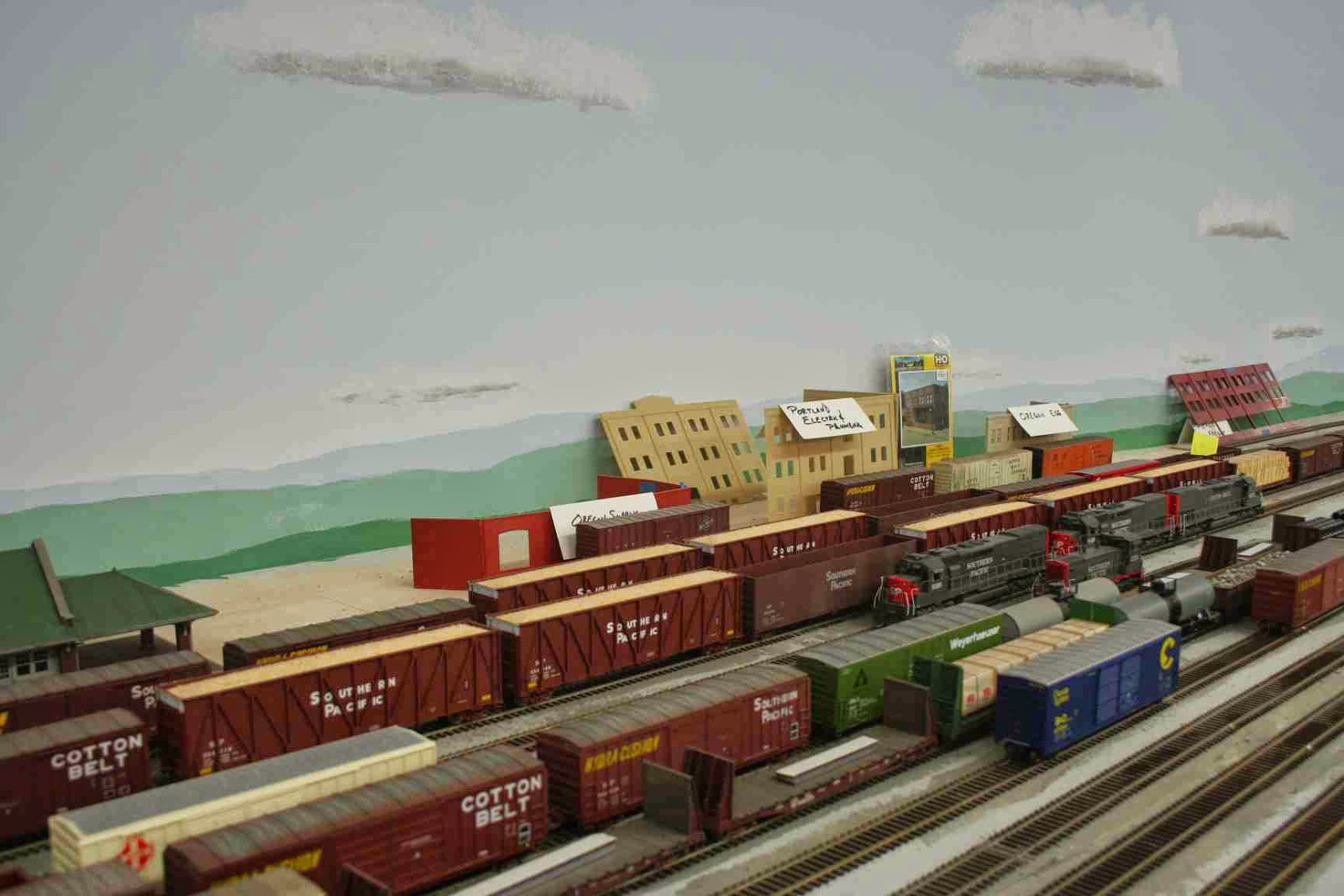 Industry spur closest to the Eugene depot installed  (closest to the backdrop).  A CNW box, Cotton Belt box and two mechanical refrigerators (SPFE and UPFE) are spotted at the three industries on this spur.

The Eugene City Switcher pulled cars from the many industries located near the backdrop on my layout, near the Eugene depot.  There was plenty of work for this job, even before another four industries get added at the RR-East end of the depot trackage.

In Springfield, I extended the Tilbury Cement spur to the rear space for Clear Fir, as it appeared in the 1960’s.  This created more track space for cement hoppers and provided a couple of spots for in-bound materials to Clear Fir. 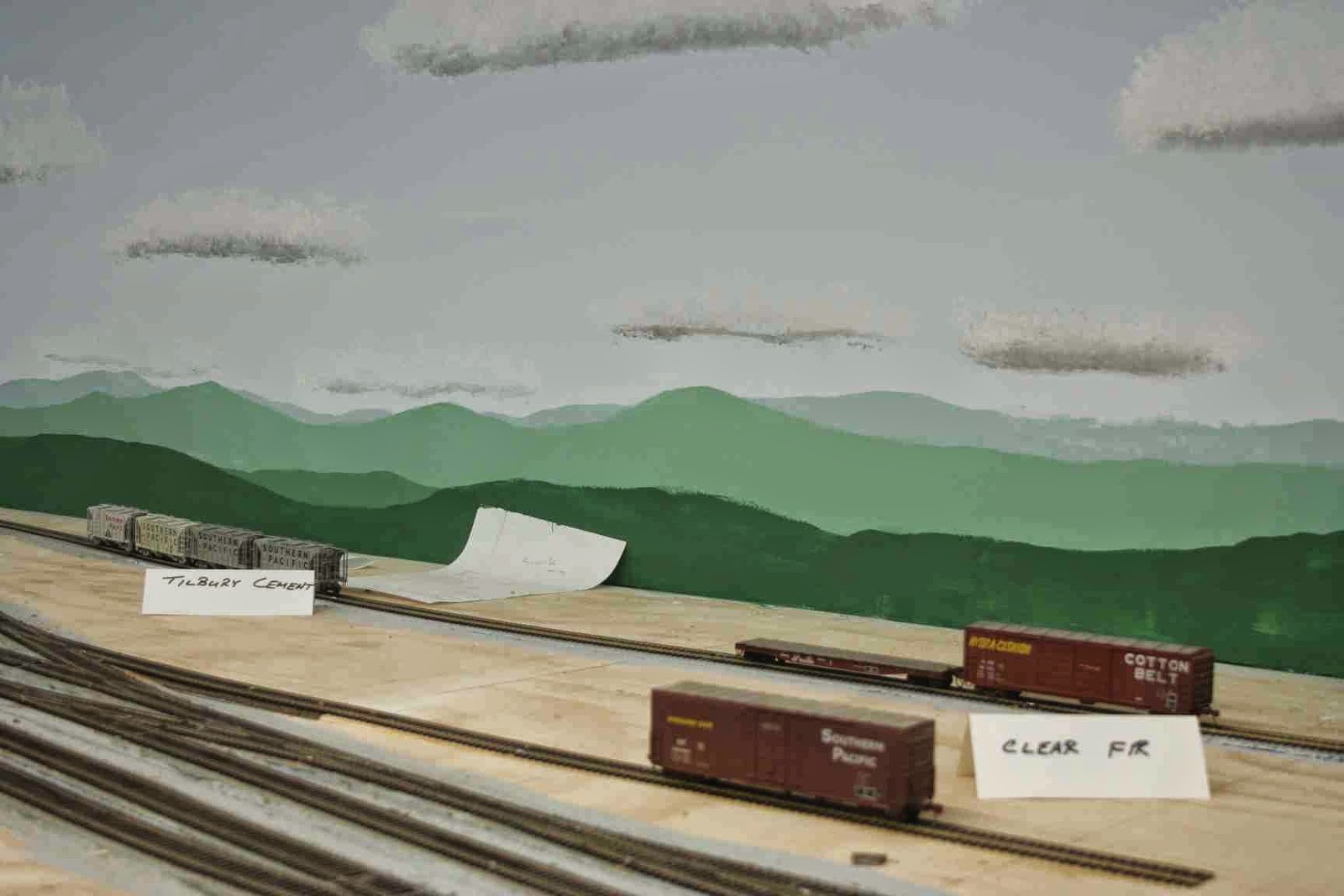 The Springfield Switcher had more than enough work to do, eventually pulling 28 cars back to Eugene.  Several spurs still had not been serviced.  It looks like I will need two Springfield jobs in addition to the Marcola Turn to handle all the traffic here.  This is very good news to an individual car movement-focused guy like me.  Adding another local switch crew without adding more switches is great news!

The completion of the mainline bridge over Salmon Creek, just RR-West of Oakridge, paved the way for the temporary bridge over Salmon Creek in front of it to serve the Pope & Talbot mill.  http://espeecascades.blogspot.com/2014/04/salmon-creek-mainline-bridge-1.html   http://espeecascades.blogspot.com/2014/06/salmon-creek-mainline-bridge-2.html
This past week I added a switch and a pair of tracks on the plywood base for this area to begin Pope & Talbot service. 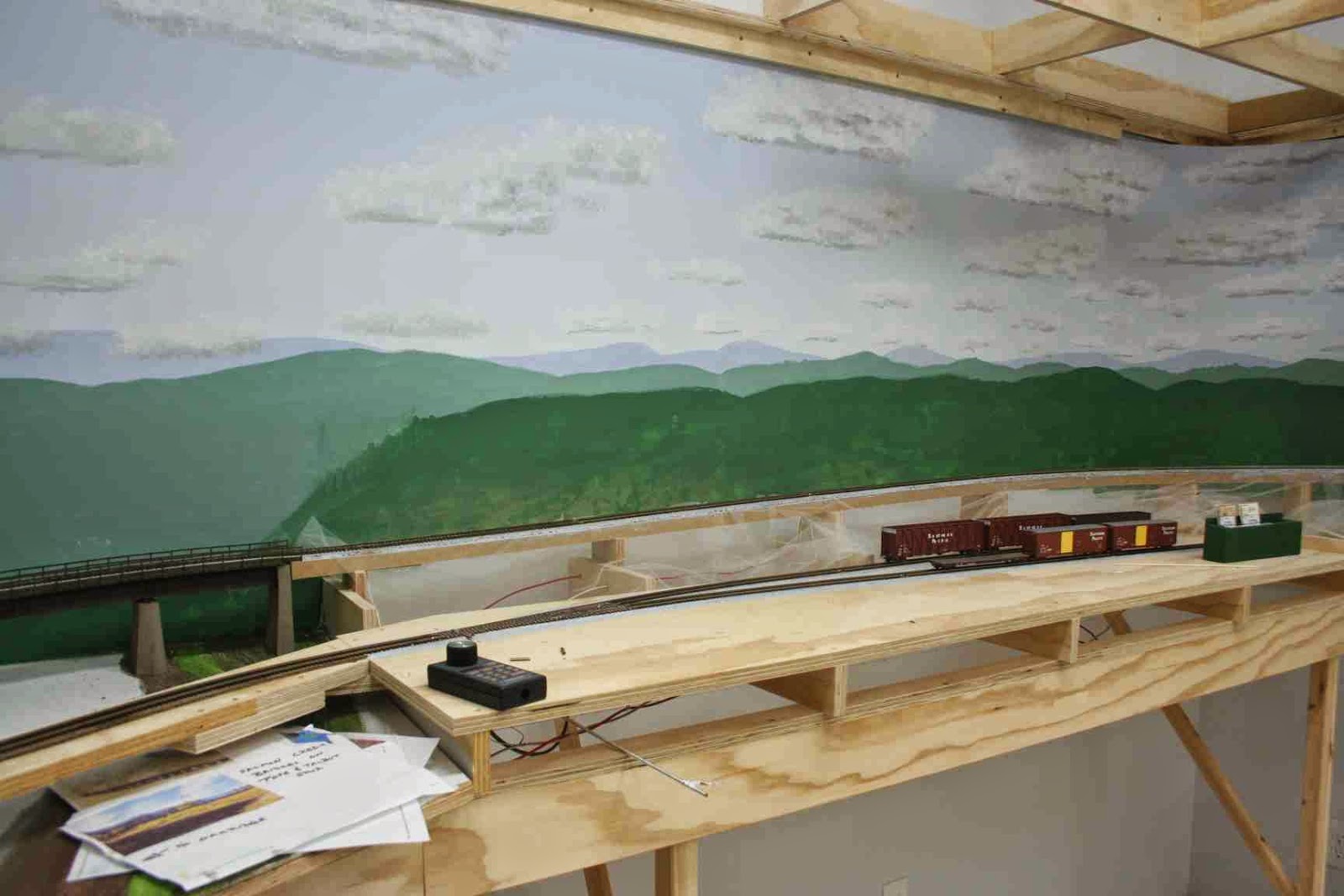 The Oakridge Turn was called to duty at Oakridge, beginning with a train staged as if it had just come into town from Eugene.  Empty cars were blocked into the train by car type, plus a few loads for Oakridge delivery at the end of the train.  Roughly half of the empties went to each of the two big mills that straddle Oakridge: Pope & Talbot to the RR-West, and Western Lumber at Westfir to the RR-East.  This job kept Dave H. busy for a couple of hours.

Historically, the Oakridge Turn originated at Eugene one day, trekked up to Oakridge, and switched Pope and Talbot on that first day.  They then went off-duty at Oakridge and came back eight hours later to finish the job.  Finishing involved returning RR-East (toward Eugene) via Westfir to switch Western Lumber, using the now trailing-point switches.

The initial model operation (just done) suggests I will modify this procedure to bring my model crew on-duty at Oakridge with a previously-staged train in the yard.  They will switch both mills and any other Oakridge work, completing their work by taking their train to Eugene.  Late in an operating session, a new Oakridge Turn will depart Eugene and terminate at Oakridge, setting up a repeat of the cycle.  On a model railroad, this has the advantage of starting a local switch crew early in an operating session, without need to interface with the main classification yard early in the session.  Meanwhile, a new Oakridge Turn can be built in the classification yard, working throughout most of an operating session.

I am well pleased with the results of the second test operating session.  Of course I have a number of “fix-it” tasks, but I can see those coming down in number (progress).  I am thrilled to be moving into developing the operating concept for my railroad, even with only a portion of it built.
Posted by EspeeCascades at 2:59 PM 2 comments:

I built the piers and abutments out of styrene, mostly using 0.060 inch styrene sheet.  The piers for the deck girder bridge were narrower than the piers I built for the main Willamette River crossing between Eugene and Springfield. http://espeecascades.blogspot.com/2013/11/bridging-gap-willamette-river-bridges-1.html
http://espeecascades.blogspot.com/2013/11/bridging-gap-2.html
Those piers were wide to account for the through truss spans.  The deck girder footprint is much narrower, making these piers too narrow to clamp for work in my cross-compound miter saw.  That led me to styrene construction for the current effort. 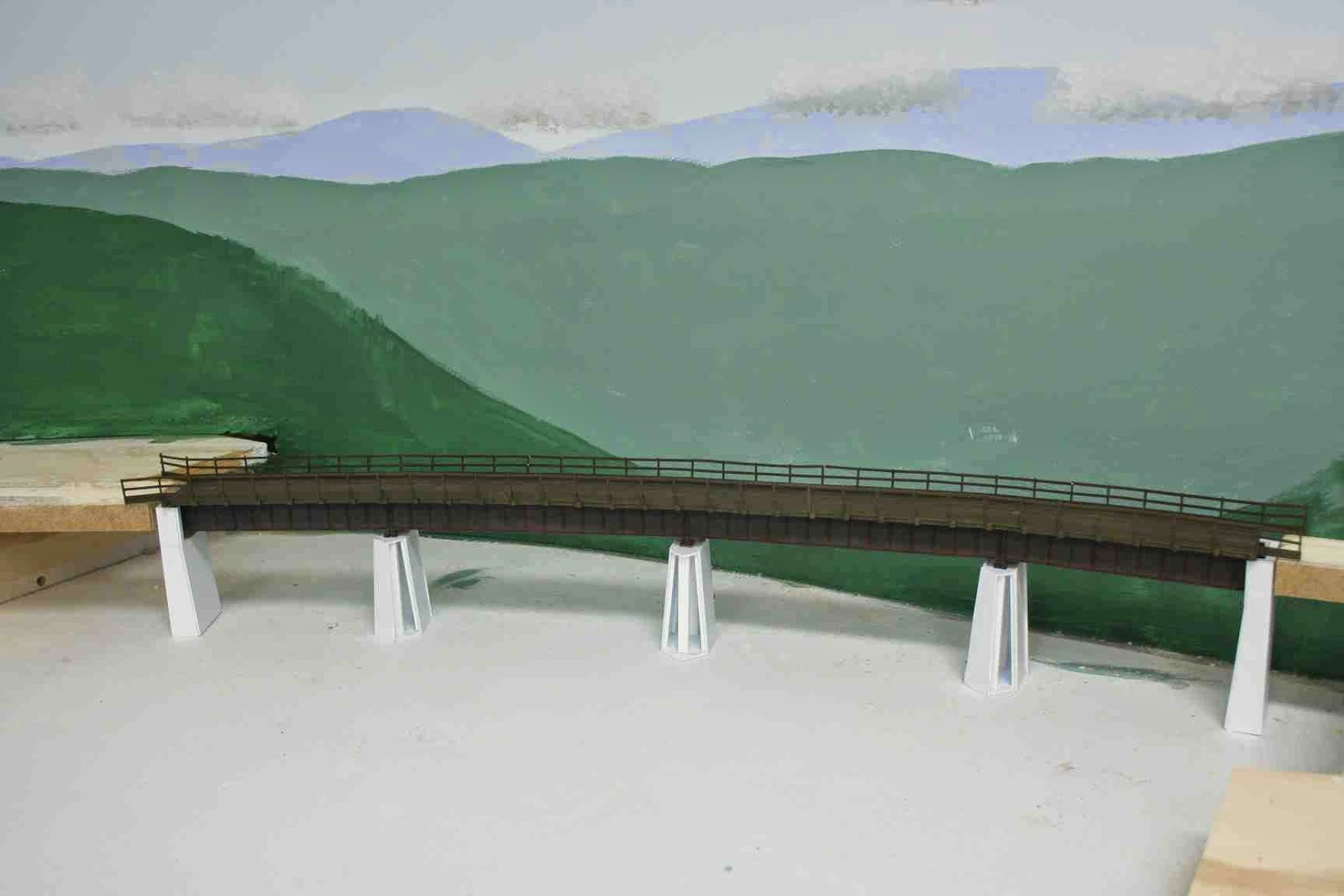 The first picture shows the piers under construction.  Styrene square tube was used to separate the top and bottom plates at the correct height.  The sides and ends were then sheathed using the aforementioned 0.060-inch styrene sheet, overlapping at the joints.  The overlaps were sanded smooth with the joining surface, providing a solid appearance.  A similar technique was used for the abutments at the bridge ends.  Both piers and abutments have a 12:1 batter (slope) per Southern Pacific Common Standard drawings for such concrete work.

The piers and abutments were finished with paint and weathering powders.  Several weathering passes were made with both paint washes and Bragdon powders.  I may apply yet another coat of a concrete-gray powder, as the rust effects are bit heavy yet.

With the piers and abutments ready, I installed them and the bridge, affixing all with Dap 230 adhesive caulk.  This adhesive will allow me to remove these pieces later, albeit with some effort.  I then installed cork roadbed (the beginning of the ballast) on the deck and continued on up the spline subroadbed grade.  After sanding the cork, I applied gray paint, mostly as a color primer for the eventual ballast installation.  Finally, I formed flex track and installed it, completing the job with electrical feeders. 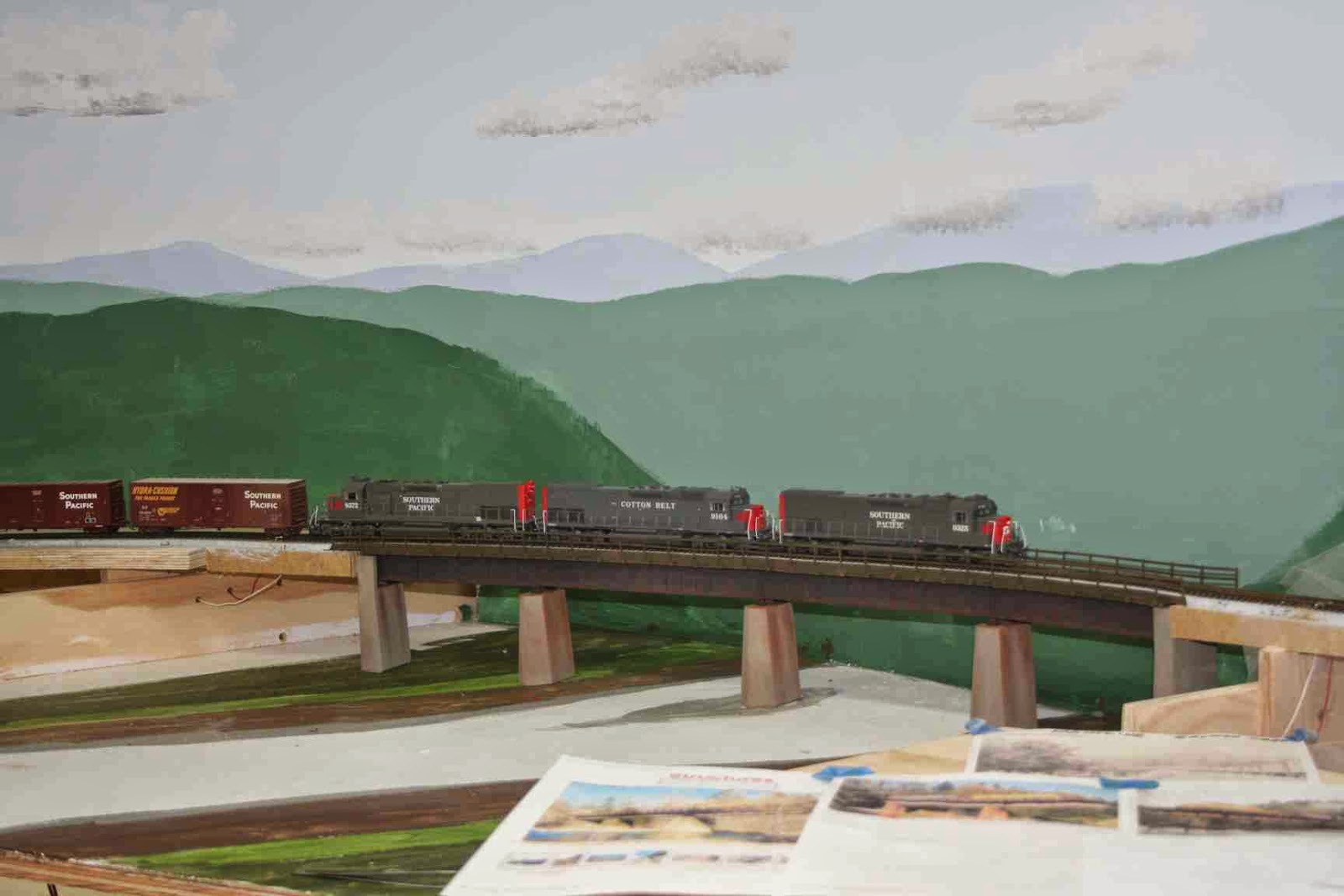 I continued the track laying up the grade.  I sandwiched tulle between the spline subroadbed and the cork.  Tulle is better known for its use in wedding veils.  It is fairly inexpensive.  My wife used it as part of a craft project for house decoration, knowing it would get recycled by me into the railroad.  The tulle provides an equipment catcher for now.  Eventually, it will help form the terrain, providing a foundation for a proper railroad grade, including drainage ditches. 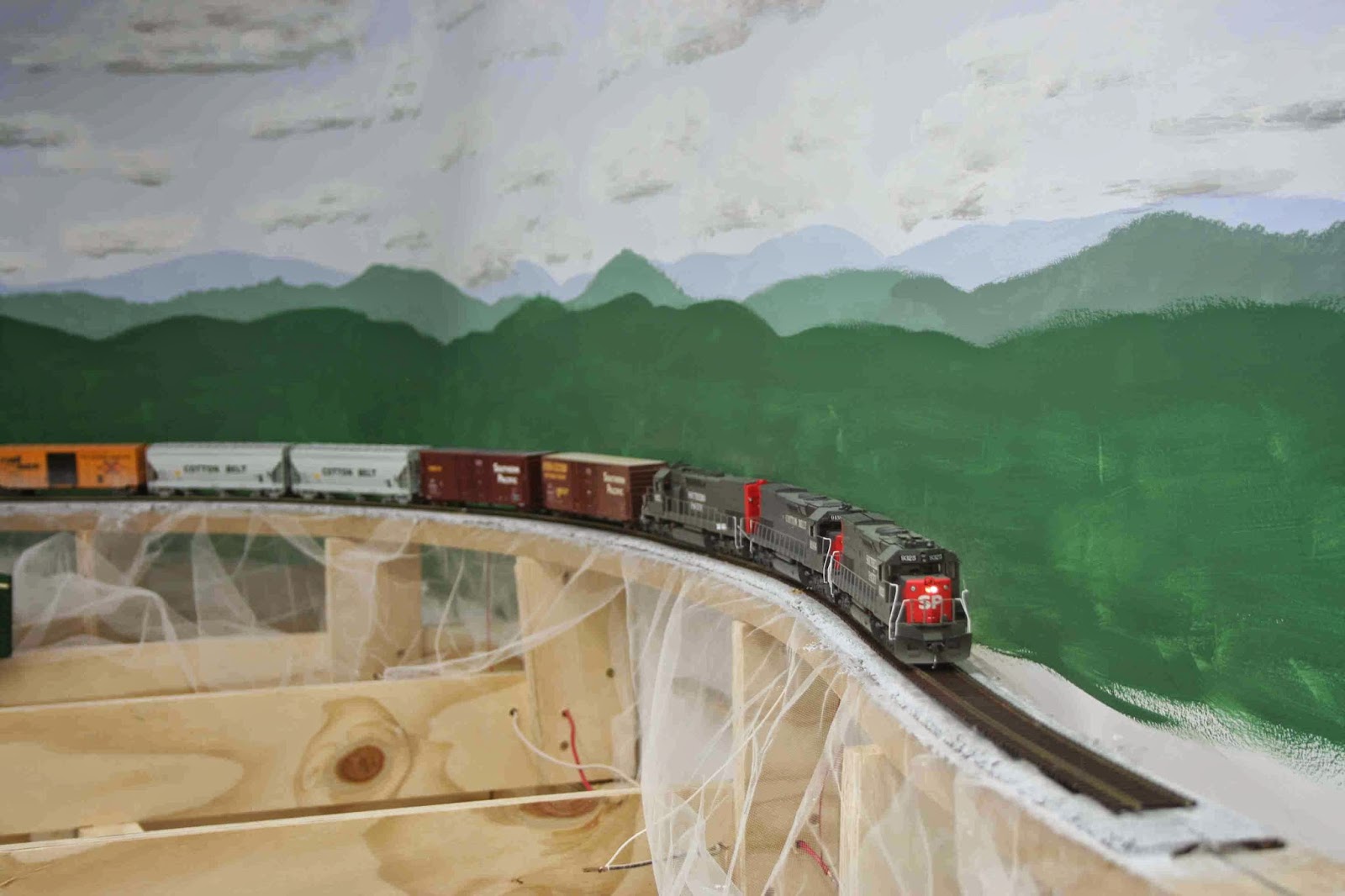 SP X-9325-W arrives at End of Track on the climb up out of Oakridge.  Note the tulle (bridal veil material) sandwiched between the spline subroadbed and the cork roadbed.

My railroad has begun the climb out of Oakridge.  I’ve also begun benchwork for the upper level: Cascade Summit and Crescent Lake.  I plan to build from both ends, eventually meeting mid-grade.
Posted by EspeeCascades at 6:42 PM No comments: