Basic wiring for Crescent Lake is now complete.  All thirty electrical blocks have been wired with feeders attached to bus wires and the bus wires brought back to the station electrical panel.  Each of the twelve staging tracks in Crescent Lake have been split into two blocks.  This reduces the overall bus wire run and provides for future control developments wherein tracks will be energized only when the switches are aligned.  For now, all blocks are tied together and are “live.”  Six additional blocks cover the switch ladders (two on each side of the reverse loop), a long lead to one pair of ladder tracks, and a utility spur track.  The lead and ladder tracks have been wired to provide for detection should I choose to do so. 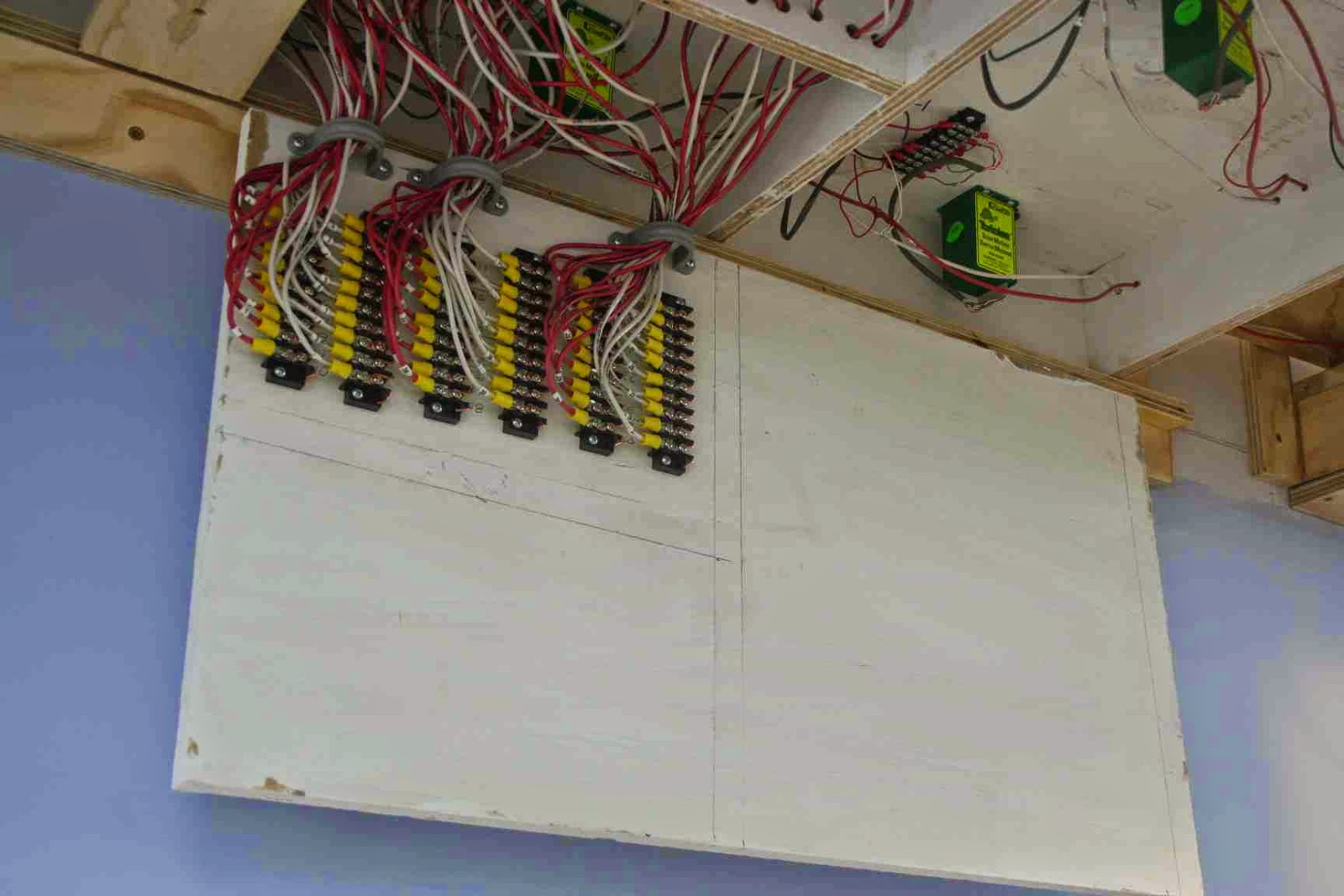 Crescent Lake Station Electrical Panel.  Bus wires for both rails of the thirty blocks are connected to the terminal strips.

The other bit of cable running and wiring involved routing cables from the directional power connections of the Tortoise switch machines back to a future control panel location.  Two dozen switch machines are now wired this way. 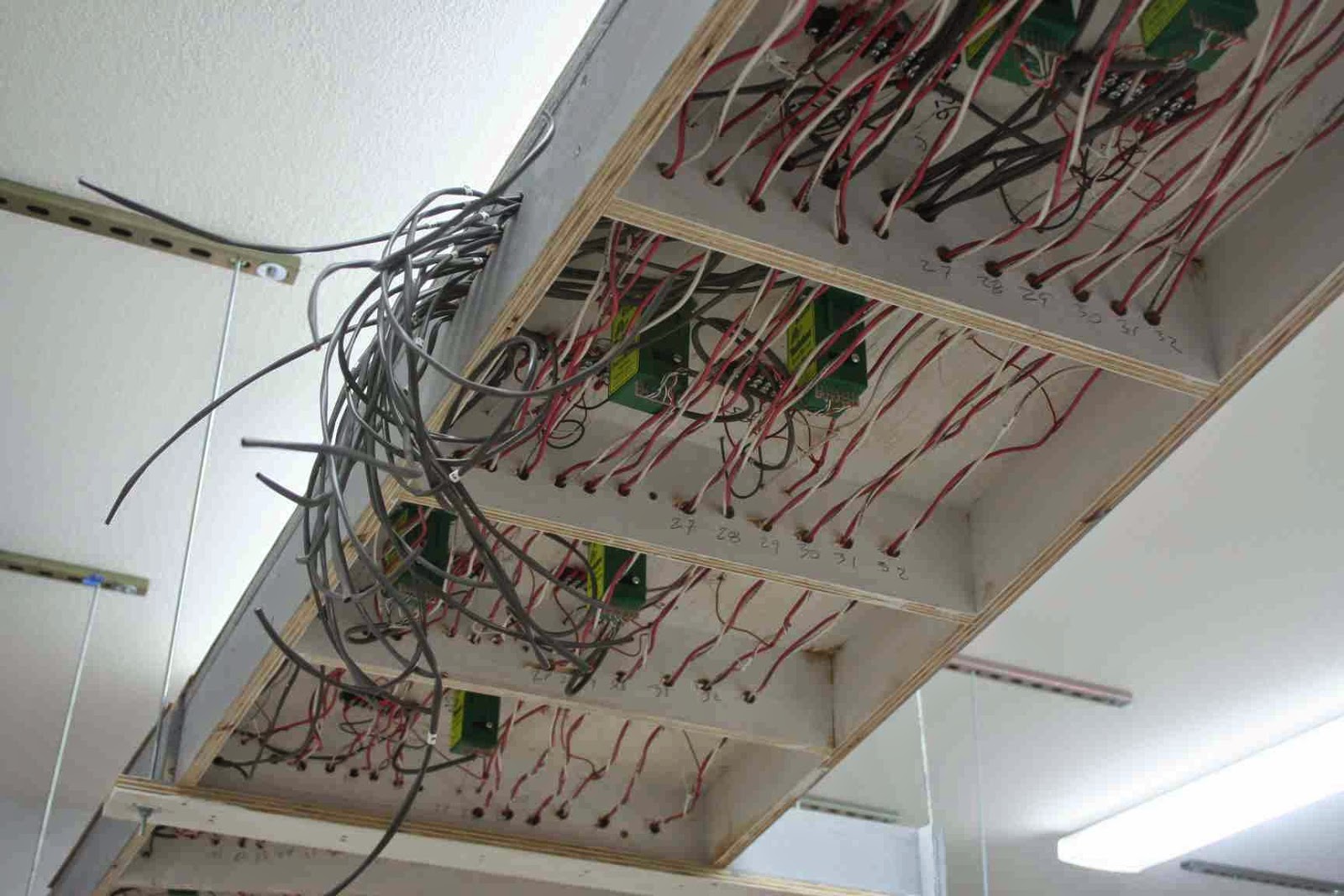 Although the switch controls need to be created yet and the track power needs to be connected to the terminal strips, all of the wiring is in place now that needs to be done before further construction below.

The next construction tasks involve the benchwork, roadbed and track for the last two major sections of the railroad—the Eugene Arrival/Departure Yard (lower staging) to be built below Crescent Lake and the completion of the mountain grade.  I needed to move many moving and storage boxes from the two wall sections that the mountain grade will be built along.  I am now planning the benchwork and track plan for that climb.  Stay tuned! 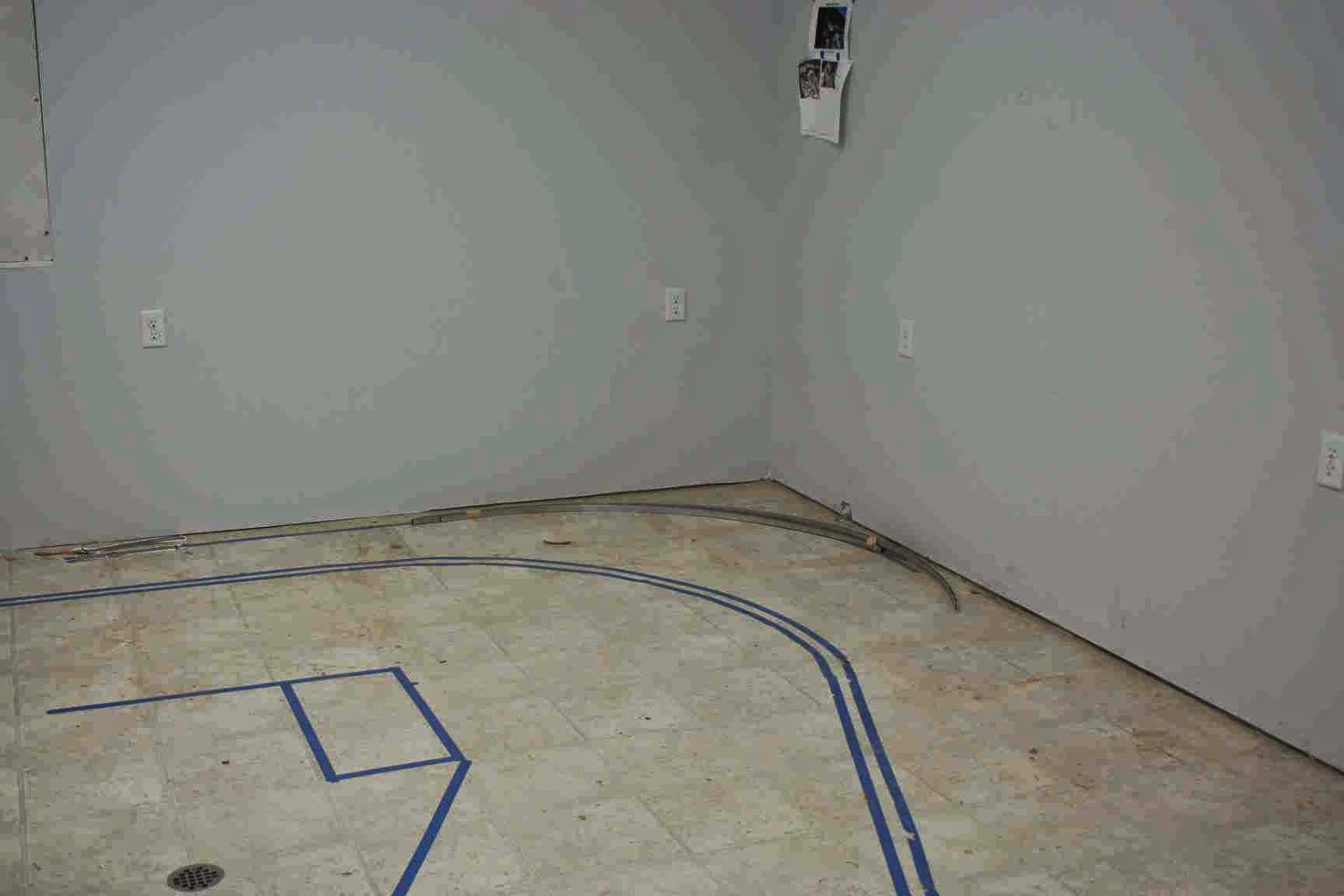 Planning for the mountain grade.  Noisy Creek trestle will be in the back corner.  The curved aluminum straps in the location of the trestle will be used as the spine for the trestle.  Wicopee siding is in the foreground.  Cruzatte siding begins back against the wall at the left side of this picture.  The turn-back loop at Salt Creek trestle is behind the camera.

Posted by EspeeCascades at 7:36 PM No comments:

Wiring for my upper level staging at Crescent Lake continues.  Half of the staging tracks have been wired and connected at the station panel.  Feeders have been dropped for the other half of the staging tracks.  While I still had room to get at the underside (before covering everything with the web of staging track bus wires), I realized I needed to get the directional power feeds run to the switch machines.  This required a new reel of 16 ga. wire, a bunch of holes drilled, cable pulling, and spade lug installations.  This has been accomplished for the two dozen switch machines at Crescent Lake. 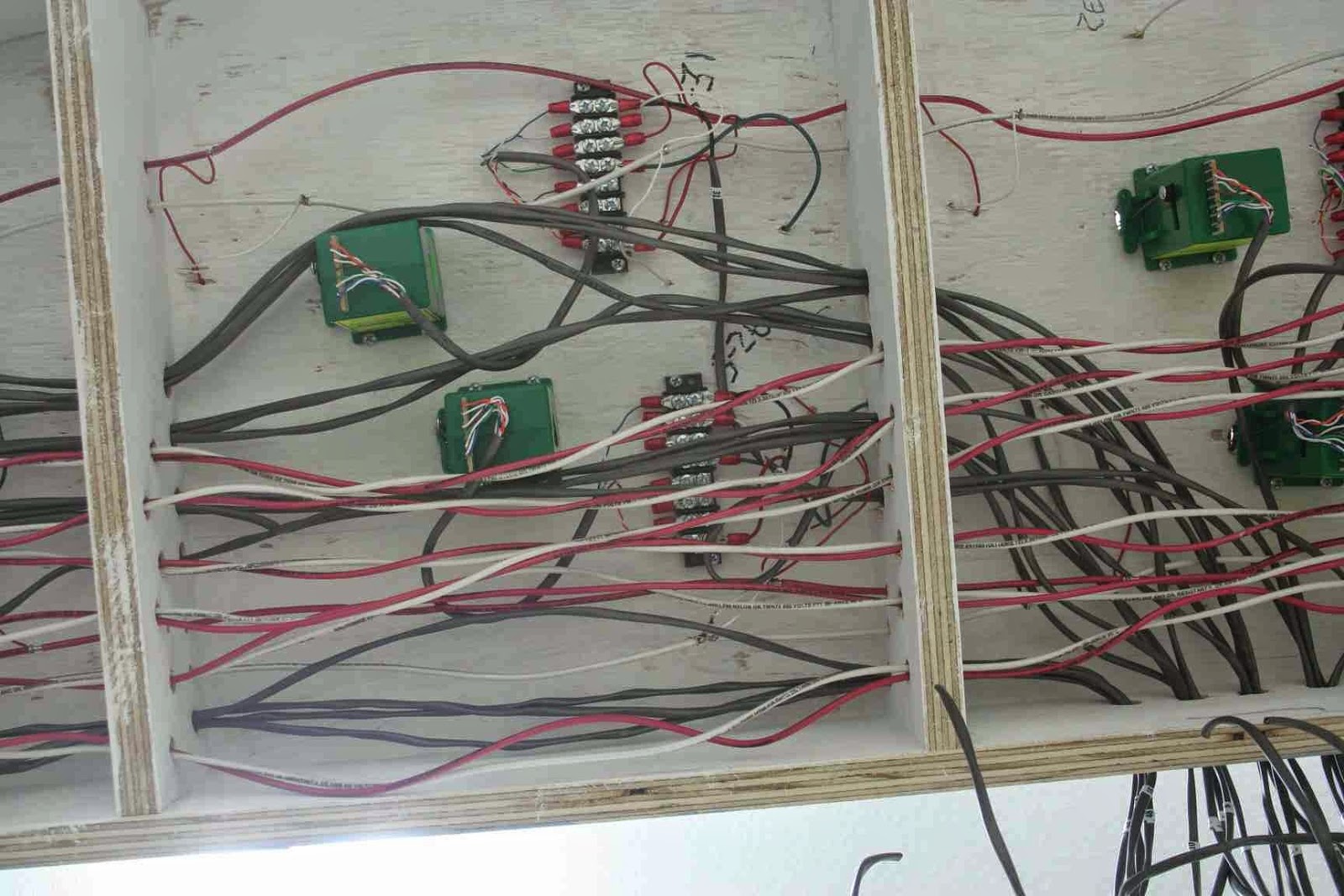 Underside of one of the switch ladders at Crescent Lake.  The heavy red and white wires are bus wires.  Six pair in the lower half feed staging tracks.  A separated pair toward the top of the picture feed the switch ladder.  The bus wires are separated to provide for detection.  The dark gray wires are 16-gauge pair used to feed directional power to individual switch machines.  The clump of these wires penetrating the edge of the benchwork at the lower right will feed into the switching system for controlling the turnouts.

I had worn down the graphite tip for my resistance soldering probe while soldering feeder wires to bus wires for the first half of the staging tracks.  I needed a new probe element.  In addition, I sought advice from the manufacturer about a separate issue anyway, so the call was placed.

I use a Hotip resistance soldering unit marketed by PBL: http://www.p-b-l.com/  PBL advertises that one can talk to a real person when one calls.  That certainly was my experience!  Mrs. Peters answered the phone and took my order, but I had a technical question, so she immediately got Bill Peters on the phone.  Bill is an expert at soldering and most other means of metal construction used in the hobby.  His video on soldering, sold with the Hotip system, is a “must see” for most hobbyists as they begin using the system or even as review before doing any other soldering. 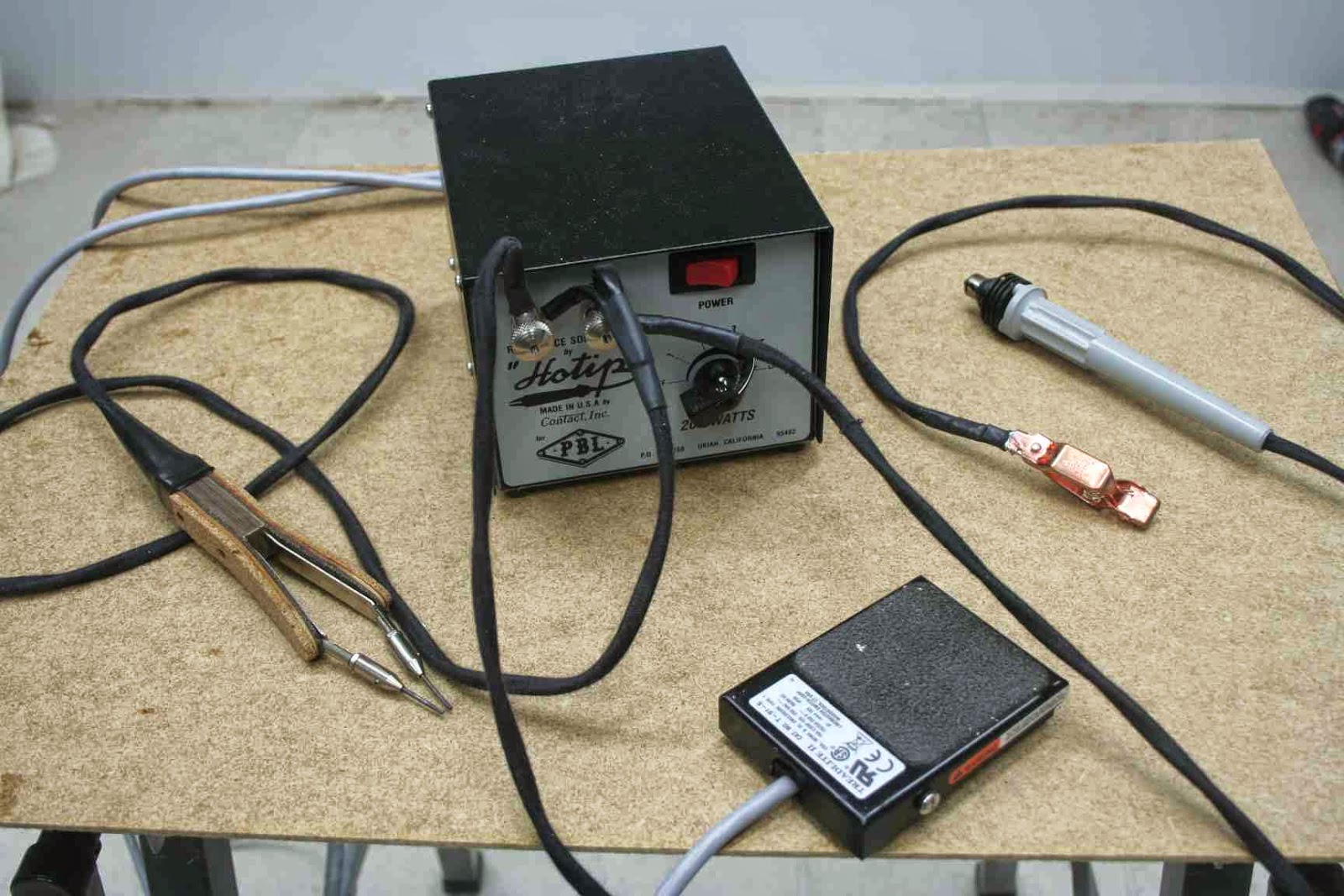 Hotip resistance soldering system by PBL.  Tweezers are on the left; power footswitch is in the center; and probe and clip are on the right.

Most resistance soldering units sold to the hobby provide a choice of a clip and probe or insulated tweezers for applying the electric current which produces the heat for soldering.  Over time, my tweezers had become unusable.  They would not pass much current, which meant they failed to create the heat necessary for solder to flow.

I described this situation to Bill Peters.  He immediately recognized the problem and suggested the solution.  The tweezers tips are titanium rods inserted in holders on the tweezers.  Mine had developed an oxide layer or scale.  The fix was very simple: pull the tips out of their holders, clean the bases, re-insert (twisting to remove any oxide in the holder) and re-tighten.  I took me as long to describe this as to do it.

Forty-five minutes later, I had two-dozen crimped-on spade lugs soldered to their wires.  That was at least an order of magnitude faster than trying to heat up the lug and wire with an electronics soldering iron!  The right tool for the job was those soldering tweezers!  This was the missing tool in my arsenal.  The probe and clamp are essential for the feeder to bus wire connection.  The tweezers are ideal for soldering spade lugs to their wires. 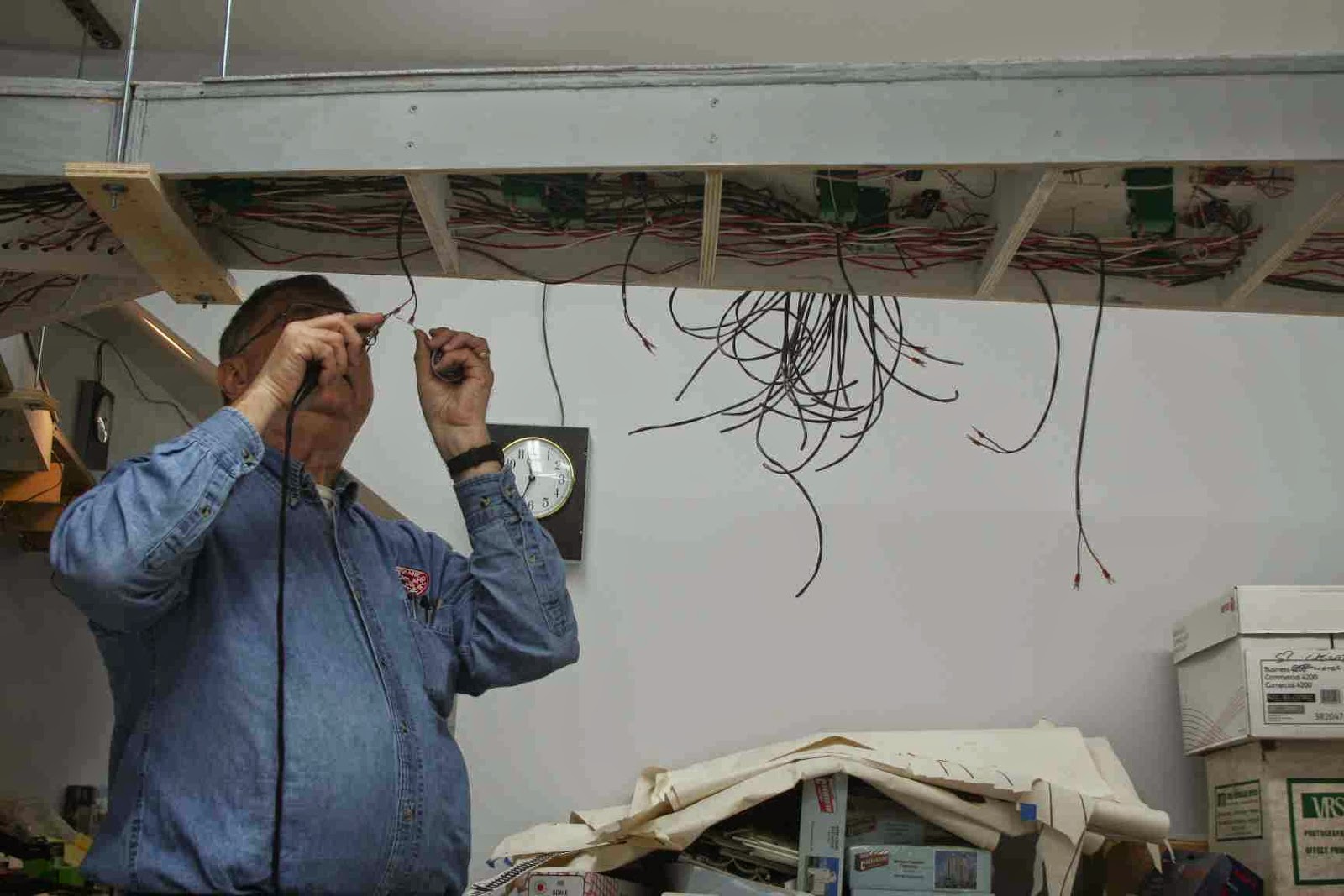 When I bought my resistance soldering unit, I considered the Hotip system from PBL and a competitor.  I elected to go with PBL because they had a good reputation locally and I knew I had a better chance of getting advice when I needed it.  I just needed advice and I am VERY happy to report I got just what I needed.  I recommend PBL and their Hotip system!
Posted by EspeeCascades at 7:57 PM No comments:

My upper level staging at Crescent Lake features a twelve-track reverse loop yard.  Twelve tracks represents far more trains than I currently expect to operate on a regular basis, but I learned long ago that more staging is always good.  Further, once built, I am very unlikely to ever go back to add still more staging, especially with the Eugene staging (Arrival/Departure yard) immediately below.

I am splitting each staging track into two electrical blocks to facilitate future control developments for that staging.  Each staging track is 36 to 40 feet long, so they almost can hold two trains each.  Eventually, I want to be able to energize only the track that has been selected by the switch routing, keeping all others off.  This is one way to deal with the cacophony coming from many parked locomotives with sound.  In addition to the two blocks per track, I have split the switch ladders into two major  blocks at each end.  One more logical electrical block is used for the long lead-in to one set of switch ladders.  Finally, I have a six feet long stub track to park miscellaneous equipment (snow gear or a switcher set for restaging).  That makes thirty electrical blocks.

I began by completing the track wiring to the switch machines and connecting the reverse loop throat trackage (the switch ladders).  The photo shows me installing a spade lug for one of the throat track blocks.  I use spade lugs crimped onto wire ends backed up by soldering.  The spade lugs are then inserted into barrier terminal strips.  This may be “overkill,” but experience has shown this is a pathway to reliable wiring with a well-defined troubleshooting spot—the station electrical panel. 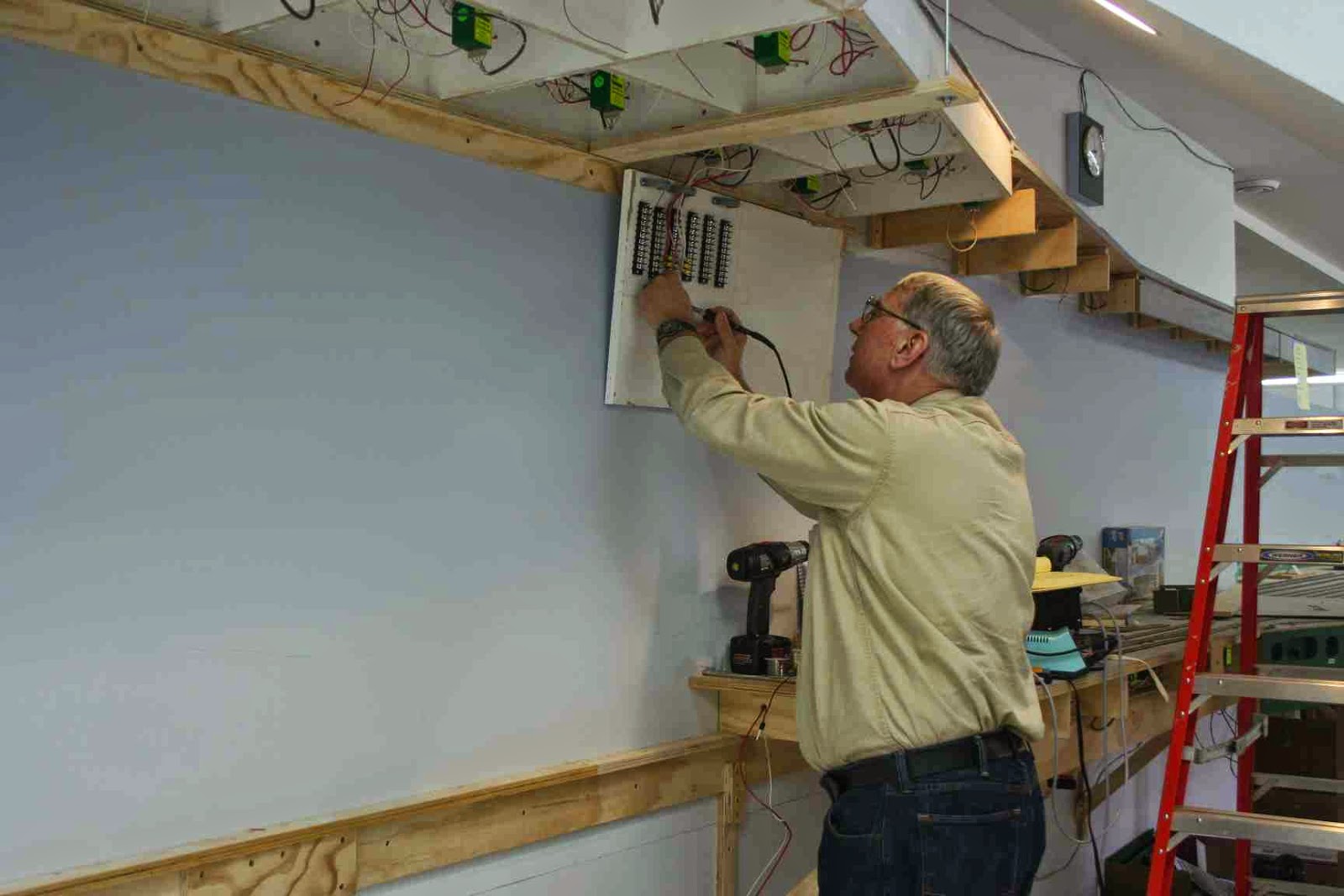 Installing a spade lug for the electrical connection of one of the Crescent Lake staging track electrical blocks.

The station electrical panel for Crescent Lake is mounted on a hinged panel.  After the wiring is completed, the panel will be rotated up into position and held on the underside of the overhead benchwork.  That benchwork constrains where the barrier strips and other electrical gear can be mounted.  More details will be shown in a subsequent post.
Posted by EspeeCascades at 6:21 PM 1 comment: