Over the course of time and frequent operating sessions, one finds certain spots on a railroad that need extra attention. While I strove to build and lay track with care, I still have spots that confound my attempts to make them operate reliably well.  Such has been the case with my track at RR-East Springfield.  The switches installed there were among my very first that I built using Fast Tracks tooling and the first track I laid permanently.  Therein lies the likely source of my problems.  This spot has drawn repeated “fix-it” notes and several serious attempts to correct the perennial derailment issues.  I documented one of those previous efforts with: 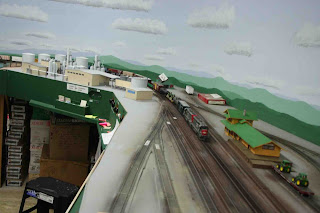 RR-East Springfield.  Track issues keep showing up in the two switches that are part of the mainline through this area.

In spite of my previous efforts, I continued to have problems in this area.  Taking another close look aided by a different selection of reader glasses, I spotted a funky almost-kink at the insulated track joint just beyond the points of the RR-East-most switch.  I attacked that problem by soaking the adhesive caulk holding the track with alcohol (50/50 rubbing alcohol is sufficient) and then lifting and resetting that track to eliminate the track joint issue.  The alcohol softens the caulk, but when allowed to evaporate, the caulk usually reforms to provide at least some bonding.  I added spikes on both sides of the insulated joint and made sure the joint was filled with styrene and filed the rail and joint smooth.

I then cross checked the switch geometry with a NMRA gauge.  While everything appeared in gauge, I took the opportunity to adjust the points a little.  Fast Tracks normally recommends a minimum clearance gap between the open point and the stock rail.  I have found my equipment (dominated by six-axle road locomotive) benefits from having a bit wider gap.  I recently found the awkward switch location up at Crescent Lake had too much distance between the frog and the frog guard rail.  I double-checked that, but this pair of #8 switches appeared to be fine.  Still, it was worth checking. 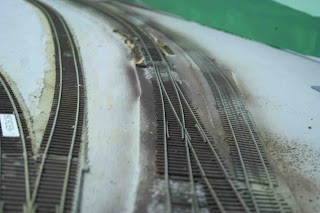 Reworked track at RR-East Springfield.  Note the short section of straight track just beyond the points.  This is some of the original track.  Just beyond that is the unpainted replacement track forming the curve.

While I was working in this area, I decided to try to reform the cork roadbed for the ballast slope.  That had been upset when I re-laid the curve leading into the switches back in 2019.  I tried using my finish router with a 45-degree bit.  While this helped form the ballast slope, it was hard to control.  I added a temporary edge guide—a piece of styrene taped to the base plate of the router.  The combination of that plus a very awkward work location led to me damaging some of the track.  That lead to pulling up most of the track curve and replacing it with a new section of flex track.  At this point the project was getting deeper and deeper into difficulty—far more than I expected with a “simple” track fix. 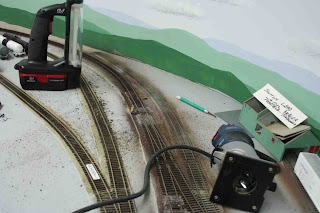 Cutting the ballast slope into the cork roadbed at RR-East Springfield. 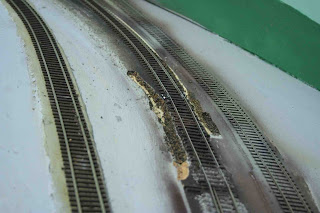 I finally chose to leave the ballast slope cut for another day.  I critically needed to get the track back in service for another operating session in early November.  That session will show me whether I have finally cured this headache.

Posted by EspeeCascades at 7:28 PM No comments:

As we reemerge from our cocoons of the past couple of years, regular model railroad events are throttling back up.  OlyOps returned in mid-October.  This was a single-day local-regional operating event, drawing on “Boomer” operators within roughly 200 miles of Olympia, Washington.  Organizer Greg Wright has a well-polished routine for this event starting with a good selection of operating model railroads around Olympia, combined with a guest list built up over the years that invites operators from around the Pacific Northwest.

The 2022 OlyOps featured eight local layouts (the typical number of layouts used).  Thirty-eight guest operators participated.  The event was arranged such that each Boomer (guest operator) operated on one layout in the morning and one layout in the afternoon.  Layout assignments were made by the Registrar with no preferences considered.  Layout assignments were picked up either Friday evening or early Saturday morning.

The registration “fee” for the event was either canned food donation for the Thurston County Food Bank or a cash donation to same.  This year’s event raised $650 and eight very large bags of canned goods—a super response!

Three of us carpooled up to Olympia from Oregon—regular operators on my railroad as well as me on theirs.  We were assigned as a carpool, so we worked on the same pair of railroads.

Our morning assignment was on Scott Buckley’s Tehama Valley Railroad (TVR).  I previously operated there during a SoundRails event and was delighted to have a return visit.  Scott’s TVR represents a shortline in the California Sacramento Valley that runs east from connections with the outside railroad world at Hamilton City to locations east of Chico.   Separate interchanges with the Southern Pacific and the Northern California Traction Company (Joint ATSF and WP short line) are worked by TVR road crews.   TVR traffic includes produce and lumber shipped out via the Hamilton City interchanges. 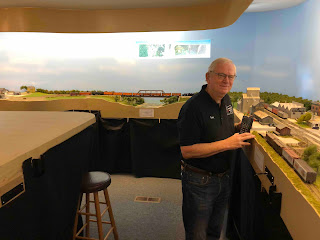 Craig L. works our train across the valley to pick up loaded produce and deliver fresh refrigerator cars at Walnut Grove on the right.  In the background is the bridge across the Sacramento River and on the left is the town of Colusa Junction..

The TVR is still under construction, but the basic operating pattern is well-established and supported by trackwork.  The layout is about half “scenicked.”  Structures include both kits and a number of scratch-built industries, notably the produce packers and other agricultural businesses.  I look forward to return visits. 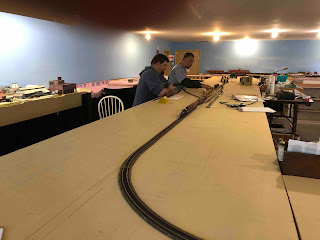 Another crew works a less developed area representing Butte City in the middle of the layout space.  The Hamilton City interchanges are seen in the back-right of this view.  The railroad terminates at its east end at a turnback loop (unseen on the right) after passing through the lumber town of Oakville.

Our afternoon session was with Chuck Ricketts on his Baja Siena Railway.  This was a fanciful On30 layout set on an island off the northern Mexico coast.  Our operating session was scheduled to be the last formal session on the railroad in its current location.  Chuck sold the layout to Paul and Nancy O. who were on hand to assist and serve as one of the operating crews.  They will partially dismantle the layout and move it to their home in Seattle. 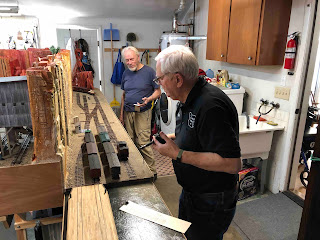 Craig L. and Jim E. work the base yard and car float.  The mine tipple with live loads (steel ball bearings) where I worked is barely visible on the left. 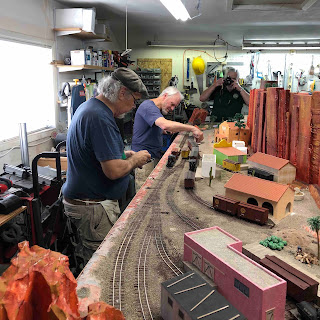 Vic N. and Jim E. work the major town and industry area on the other side of the layout.

Chuck Ricketts began construction of the railroad until slowed by a major health event, whereupon Jim E. took over to complete track laying, wiring and generally assisting to bring the railroad up to its current state.

Though fanciful, the railroad proved a lot of fun to operate.  Four crews were kept active through the afternoon. 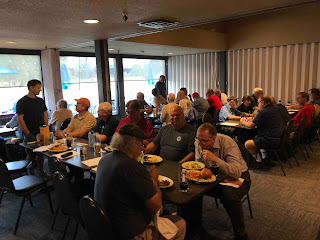 OlyOps concluded with a dinner at the community golf course, attended by both the local crew and visiting operators.  We all had a great time and look forward to next year’s edition!

Posted by EspeeCascades at 3:46 PM No comments:

With a heavy heart, I report the passing of another of my great railroader friends, Rick Kang.  Rick served as a Dispatcher for the Southern Pacific at Eugene from the 1970s until that office was closed and consolidated to Roseville in 1989.  Throughout that time and later, he was a tremendous resource on railroad operations for the model railroad and railfan communities.

From my time in the San Francisco Bay Area, I knew of Rick’s involvement with Jim Providenza’s Santa Cruz Northern model railroad in the North Bay area.  Being based in the South Bay, I never had the privilege of operating with Rick at that time.  Instead, when I retired and moved back to Oregon, I met Rick through operations at Tom Dill’s SP Siskiyou Line layout.

Rick was immediately interested in my efforts to model the SP Cascade Line.  Rick was generous with information, time and effort to help bring my dream into reality.  He dispatched my first operating sessions and taught that art to my core group of laymen model railroaders.  Although I was experienced in the art of model railroad operations, Rick helped raise my and my crew’s knowledge and practice on my railroad.  Often times, Rick would arrive for an operating session with an envelope of new paperwork and instructions covering yet another facet of rail operations. 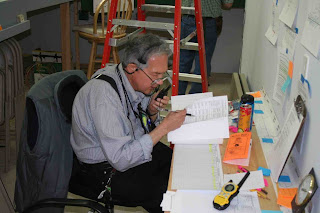 Rick Kang dispatching my SP Cascade Line in June 2016.  The railroad was in raw shape with the Dispatcher situated in an area eventually covered by the crew platform for Crescent Lake.  The step ladder was used to access the Crescent Lake control panel. 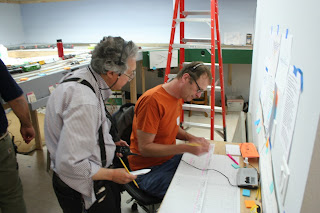 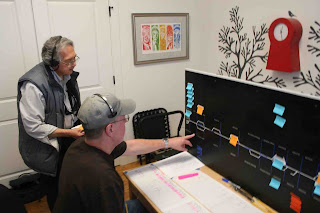 Rick Kang interacting with Dispatcher Dave H.  The Dispatcher’s desk moved into our exercise room and gained a steel panel with track schematic.  By this point, Rick had trained several Dispatchers for my SP Cascade Line and had transitioned to a new role as Assistant Chief Dispatcher.  I didn’t know I needed one until Rick showed us the value added.  The ACD interacted with both Dispatcher and train crews, keeping the railroad moving while the layout owner chased gremlins. 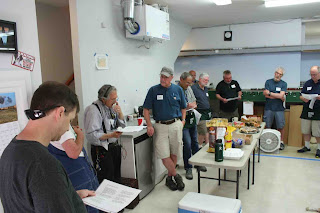 Rick Kang added to the crew briefing, training all of us into better procedures.  Here he is reviewing proper radio procedure. 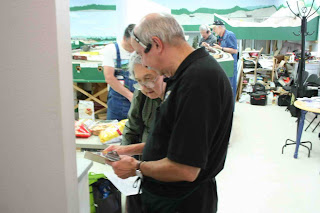 Rick was bright, focused, and always thinking about how to make model railroad operations more interesting and realistic.  For me, he was a mentor and friend.

Posted by EspeeCascades at 5:57 PM No comments: