As I worked on a nearby track project at the RR-East end of Eugene, I kept bumping over a loose track intended for the scale house at Eugene.  It was past time to deal with this simple project!

Railroads charge for most freight on a weight basis.  They negotiate various methods of computing or providing the shipment weight with many customers, but some loads simply need to be weighed.  Most railroad yards of any significance have a scale track.  The scale can be used to determine the empty weight of cars just shopped and to weigh loaded cars as needed.  Fairbanks Morse was a major scale manufacturer and their scales often used standardized plans for the scale house.

A few years ago, Walthers produced a kit for a pair of track scales, 933-3199.  This kit provides a pair of scale houses and representations of two types of track scales and coverings.  The scale house is a simple assembly job.  I spent more time painting than assembly.  I chose the older style scale covering which was used with a dedicated scale track.  The other base features track stand-offs on a "concrete" base intended for closely parallel tracks (about a foot between centerlines) for the scale track and its by-pass.  Similarly, the scale houses include one with a peaked roof which I used and one with a flatter roof. 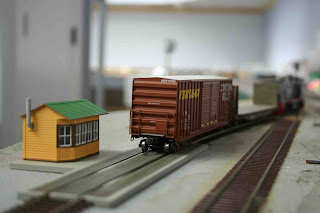 Scale house installed at the RR-East end of my Eugene classification yard.

My scale installation at the RR-East end of my Eugene classification yard includes a straight run-around track and a separate scale track.  That latter track was left loose for the past five years as I needed to decide which scale base to use.  After years of thinking I would use the concrete base with stand-offs, I finally realized I already made that choice when I laid out the separate scale track.  With that settled, it was easy to proceed--at last! 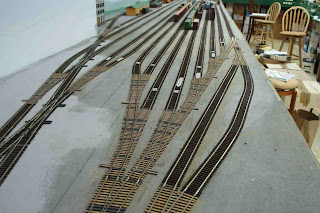 The scale track is the curved track on the far right in this view of the RR-East end of my Eugene Classification Yard.

I quickly assembled the scale house with a peaked roof and then set about painting it into standard Southern Pacific company structure colors.  As with my recent effort with the Eugene freight house, I used TruColor paint.  I first used white paint for the window mullions.  The windows were masked and I applied Tamiya fine surface primer.  Next came TruColor TCP-153 SP Colonial Yellow paint.  The roof was painted my variation of Moss Green, wherein I lighten the TruColor TCP-154  with white paint at about a 4:1 ratio.  Finally, I masked and painted the window and door trim.  I used TruColor TCP-163 for the light brown trim.  Although I used a fresh bottle and was able to spray the brown trim this time, touch up (almost always needed for trim!) proved difficult as some of the trim brown paint flaked off of the yellow paint underneath.  After two serious tries with the TruColor SP Depot Trim Brown, I am about ready to give up any further attempts with this paint for the trim. 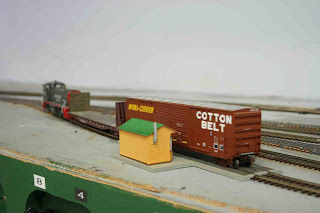 A Cotton Belt lumber boxcar= is getting weighed at the new scale house installation.

The track scales feature "wood" planks surrounded by concrete curbing.  I began with a couple of spray paint overcoats I use for wood loading docks.  I then used multiple washes with thinned acrylic paint in tan, gray, "railroad tie brown," and black.  As usual with this sort of wood planking effect, multiple washes are needed to achieve the desired finish.  I will now add some car card tags to designate cars to be weighed as they pass through the Eugene Yard. 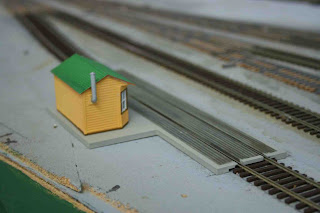 The scale house is finally done.  The track has been installed permanently--no more loose track getting caught by sleeves or simply knocked out of place.  The scale house clearly indicates the function of the track immediately in front of it, so I should no longer find the yard crew parking the RR-East switcher on the scale track!  As I noted, this was a simple project that waited all too long for completion.

Posted by EspeeCascades at 4:10 PM 4 comments:

As we enter the seventh month dealing with the worldwide Pandemic (and longer since it first entered humans), we gradually are learning how to conduct limited activities while maintaining health safety.  A casualty of the initial wave of societal shut-down was the portion of the model railroad hobby devoted to routine operations.  That activity necessarily involves several people in close proximity--conditions ripe for virus spread.  Still, we are social animals so a way needed to be found to interact in a safe fashion.

Model railroad technical activities moved to computer on-line meetings.  Some of these have been quite well organized and conducted, others demonstrated a need to learn and improve.  For the operating part of the hobby, though, we needed to find a different solution.  Some have found ways to engage on-line, using internet connections.  I chose not go that route, staying with my conventional radio throttles.

What developed in my area over the summer has been a series of outdoor gatherings for "Show and Tell."  My version of this spent an hour or two on my back patio showing off the fruits of model work done during the shut-down and general discussion--all done with distance protocols observed augmented by face-masks.  We then entered my basement layout space (well ventilated) for limited operations.  My first couple of such sessions had very small groups of four or five of us.  My latest session had a larger group of eight.

As with my initial small group sessions, we began on the back patio for "Show and Tell" and general discussion.  This is an important part of the social side of the hobby.  Other than eating or drinking, all remained masked, with distance always maintained.  We then entered the basement to operate the railroad.  Masks were required at all times when indoors and distance maintained as much as possible. 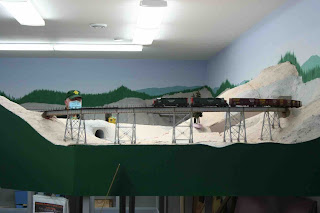 Operations return to my railroad as we continue to deal with community health guidelines.  It was great to see traffic rolling over Salt Creek Trestle again!

I designed my railroad with ample people space.  In particular, the main operating aisle between Eugene and Springfield is six to eight feet wide.  Other aisles are three feet wide or broader, with careful thought about the people flow.  Indeed, the aisle between the Oakridge-Westfir area and the main mountain sidings is six feet wide, but separated into two three feet wide aisles, with one of those on a platform.  This helps my operating crew maintain distance as they go about working their trains.

Another aspect of my layout design was that I planned for "satisfying" operations by a crew of only six. My normal full crew is 16-20, but a small crew of six can perform samples of all operating functions.  I never imagined that a health scare would force me to test that design aspect, but here it is.

My first two limited operating sessions sampled some of the operating roles, with yard operations, local freight operations and some mainline running conducted.  Those sessions worked the initial trains of a "standard" lineup similar to former full sessions.  The latest session worked much more of that line-up.  We worked about half of the trains on the line-up over a two-hour period.

My limited sessions all use single-man crews, in contrast to my normal use of two-man crews on all of the locals and some of the through freights. Road crewmen used two throttles when they inserted the mid-train helpers to climb to Cascade Summit.  Most helper locomotive sets were returned to Oakridge on the point of the next RR-East train.  The yard crew was thinned out to just a Eugene Yardmaster and a Santa Clara Tower operator.  Both of these functions usually use additional crew members in more congested operations.  None of my sessions have used a Dispatcher--so far--but that will change as I gain experience with planning for limited operations and recruit ten-man crews.  Current Oregon State health guidelines cap indoor "social" activities at ten, so I will plan operations around that crew size. 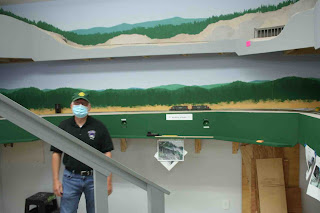 Craig P. has tucked a light helper set into the house track at McCredie Springs as a following RR-East trains is about to meet a RR-West working uphill.

So far, my yard crews have kept up with classification requirements and other switching work on the railroad.  The reduced number of road crews helps relieve pressure on the yard activity.  The yard crews have been able to support the local freights with one or two originating in each of the small group sessions. 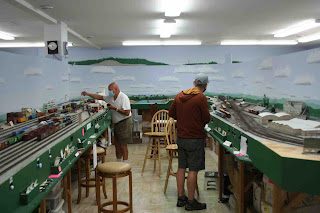 Rick A. works the Eugene classification yard (left) while Dave H. works the Springfield-B local on the other side of this major operating aisle. 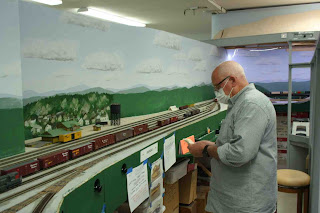 Mark K. organizes his train and the work for the Oakridge Turn. The Oakridge Turn has had at least some work done in each of the three small group sessions held so far.

While the classification yard and locals did their work, trains ran over the full mainline.  With three crewmen available in the most recent session, quite a bit of traffic was moved.  The crews used "smoke signals" to coordinate their moves, planning their meets by quick conversation.  A key aspect of this was that all crewmembers are experienced with my railroad and knew where possible meet locations were, how long it usually took to move between sidings, and the normal use of those sidings. 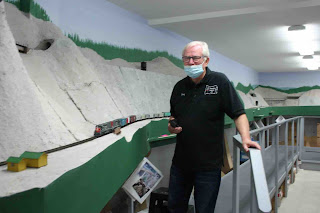 Craig L. brings his RR-East train downhill past Eagle Creek and toward a meet at McCredie Springs. 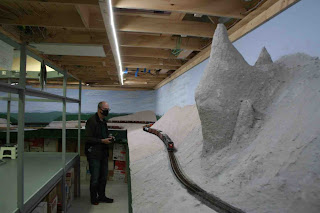 Rodger C. added a mid-train helper at Oakridge and is now working his train uphill in the "Pryor" area and past Montieth (Rooster) Rock.  He will meet the RR-eastbound light helpers and the RR-East road freight at McCredie Springs, just around the corner. 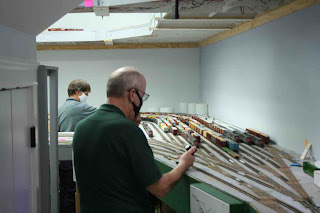 Rodger C. is picking up another through train from the Eugene Arrival/Departure Yard.  In the background, Santa Clara Tower Operator Scott B. is working with locomotives in the engine facility.

It was great to see my railroad return to some semblance of operations.  While I did the primary re-staging for the first session in early August, the most recent session required a very thorough scrub of the rails to clean them.  Disuse and possible film haze left on the rails from recent forest fire smoke left the railroad in poor electrical contact condition. The larger crew of the most recent session points to a way to exercise the railroad while maintaining health safety protocols.  This may well be the way we enjoy this aspect of the model railroad hobby for some time.  The sparkling eyes behind masked faces (couldn't see the smiles) clearly indicates this crew is ready for more!

Posted by EspeeCascades at 12:51 PM No comments: