Track is the fundamental infrastructure for a railroad.  Model railroaders have long observed that effort spent to ensure track is laid to precise standards pays off throughout the life of the layout.  A layout the size of my SP Cascade Line depends on high track-laying standards to keep annoying derailments and other issues at bay, thereby keeping the maintenance required at an acceptable level.  Selection of track-laying techniques was an important early decision during the design process.

Surveying the state-of-the-art of model railroading over the past decade-plus led to an easy decision to use Micro Engineering (ME) flex track.  ME track is well-detailed—better than I could do hand-laying (individual ties, rails and spikes).  Further, I need to lay a lot of track.  Flex track represents an important time and labor saver.  Little did I realize at the time (more than a decade ago), my choice to use ME track would also plant me firmly into using a US-made product while other suppliers have gone off-shore.  Current supply issues for other track brands have not impeded my track-laying.

One issue with Micro Engineering track is establishing curves.  Though ME track flexes, it does so “reluctantly.”  A positive result of this is that it holds a curve once established.  The challenge of forming curves was neatly solved for me by my local hobby shop owner as he handed me a plastic block with grooves molded into it, made by MLR Mfg. Co. (Walthers 479-5001).  The flex track rails fit into the grooves, so the block can be used to form a curve.  I use my hardboard curve templates--laid out and cut out to help with full-size track planning--to help guide my forming of a curve.  Once I am close, I follow up with a Ribbonrail curve gauge (170-xx, where “xx” is the curve radius in inches).  The Ribbonrail curve gauges have been around the hobby for ages.  They have remained available because they are so good at curving track to a consistent radius. 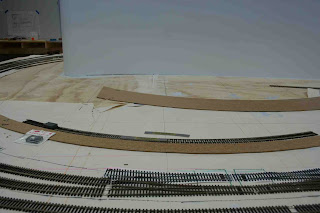 The other critical track component is a turnout or switch.  The NMRA test of ready-made turnouts on the market, published a couple of years ago, was very revealing.  Most manufacturers failed on multiple dimensions in a turnout.  Micro Engineering came close, with only a relatively minor flaw.  Upon inspecting a couple of samples, I decided to use ME turnouts where they fit into my track plan.  Fortunately, about 2/3 of the turnouts for the SP Cascade Line will be #6, fitting perfectly with the ME products available.

Unfortunately, ME makes only #6 turnouts.  I needed longer turnouts for my mainline.  I looked closely at other manufacturer’s products, but was disappointed by both the NMRA test results and my direct inspection of their construction methods.  The solution is to make my #8 turnouts using Fast Tracks jigs.  Fast Tracks is one of two turnout jig makers to receive NMRA standards conformance warrants—very high praise!  My investment in several jigs and tools will easily be amortized over the other 1/3 of the turnouts required for the SP Cascade Line.  The issue here is not so much cost as it is that the track (turnouts) conform to NMRA standards.  Further, as I am personally verifying now, the speed of construction to those high standards is important as well. 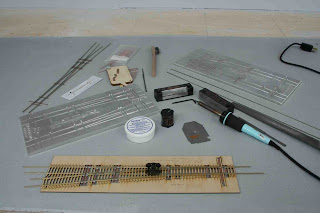 The Fast Tracks system consists of jigs for forming the frog, points and stock rail notch, printed-circuit board ties, and a precision-machined aluminum plate jig for turnout assembly.  The large plate jig has precise rail guides milled into it for the specific rail used, hence a jig for code 83 and another jig for code 70 turnouts in the photo.  Inserting the ties into the jig plate, followed by the rail and then soldering the rail to the ties results in very precise turnout geometry.

My original plan was to use Central Valley switch tie kits for the turnouts to be located in very visible areas such as my current work at Eugene Depot, Springfield and Oakridge.  I have been so impressed by the ease and precision of the Fast Tracks system that I have discarded that idea.  Instead, I will use Fast Tracks “Quick Sticks” ™ switch tie plates for all Fast Tracks turnouts.  As seen in the photo, the Quick Sticks ties have cutouts for the pc board ties, so the jig-built turnout just drops into place.

One addition I made to the Fast Tracks system was to create a modest styrene jig (holding device) for filing the insulating notches in the pc board ties.  I simply glued a strip of .040x.060 inch strip to a base plate on either side of a tie.  This holds the tie while filing the notches in the conducting face foil of the pc board.

I am very impressed by the Fast Tracks system.  Count me as a satisfied customer.  Fast Tracks can be found at: http://www.handlaidtrack.com/  I’ll place this upl on my links page, as well.
Posted by EspeeCascades at 11:56 AM No comments: