My efforts to populate the Eugene and Springfield area with structures have turned to the Springfield Depot—at last!  Springfield had an SP Common Standard Type 18 depot plan.  This Queen Anne style depot was the second most common depot plan on the SP, superseded only by its replacement, the Type 22.  Both are combination passenger and freight depots with agent’s quarters on a second floor over the passenger section and agent and train order operator’s office.  The Queen Anne style features lots of gingerbread trim.  It is a lovely depot.

Springfield’s depot has been repurposed and moved a few blocks once the railroad’s business no longer required a depot.  Springfield’s Chamber of Commerce now uses the depot.  The depot has been restored to its original plan, including roof peak trim.  In the same vein, it now sports the original extensive trim paint which causes the gingerbread to really pop. 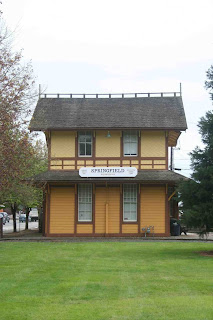 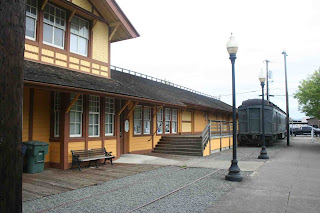 View of the former track side of the restored Springfield depot.

The Southern Pacific Historical and Technical Society (SPH&TS) commissioned an HO-scale kit for the Type 18 depot.  I eagerly ordered one when announced and was one of the early recipients of the kit.  The kit was manufactured by Bill Banta of Banta Model Works.  It features extensive laser-cut parts.  In contrast to other laser-cut kits for SP structures, the Banta kit uses an inner structure core cut from medium density fiberboard (MDF) to which several layers of siding and trim are applied.  Kit instructions include fourteen pages of text and photos describing assembly and another sixteen pages of parts and assembly drawings.  Wow! 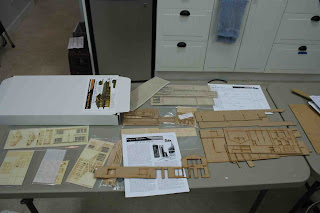 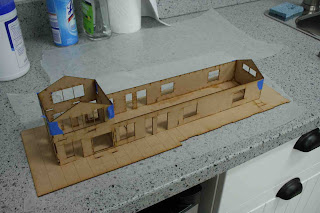 Bill Banta recommends using several adhesives, including a spray contact adhesive.  As I built the kit, I found myself gravitating more and more toward use of wood glue, spread with a toothpick rather than the spray adhesive.  In retrospect, I think I should have done this throughout, as the contact cement was very unforgiving for parts positioning.  On the other hand, I probably should have considered using the spray adhesive for the intricate gingerbread trim which is done in two layers.  I augmented the primary adhesives with gap-filling CA.  There were several instances of applied siding debonding at a corner or edge.  The CA allowed me to get the lifted part reattached.  I also found the CA useful to create a tack bond for positioning while the wood glue set.

The windows and doors for the depot follow SP standards for the era of construction, roughly 1887-1893.  No commercial styrene castings suffice, so Bill Banta designed laser-cut parts including framing and trim, upper and lower sashes, and glazing for the two sashes.  The doors are similar, as all but the freight dock doors have transom windows overhead and also have trim paneling.  Once I got into the flow of assembling and installing the windows and doors, it went pretty smoothly.  My Northwest Shortlines (NWSL) True Sander came in handy to square up the multi-layer windows and doors. 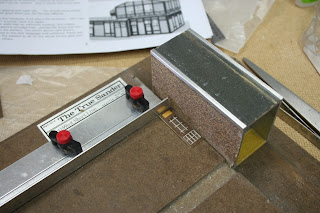 Squaring up a multi-layer door using my NWSL True Sander.

The roofs are covered in shingles—lots and lots of shingles.  The kit supplies laser-cut paper shingles which come out as strips.  Guide lines are etched/burnt into the roof panels to help align the shingles.  I have used similar shingles on a number of SP structure models, but the ones in this Banta kit are by far the best for the strip shingle technique.  I found mine tended to self-straighten as I applied them.

I chose a “simplified” trim scheme for my depot, typical of 1950s and later depot paint.  This actually made my job more difficult.  As designed, it is relatively easy to do the original maximum trim paint.  As noted above, the trim is applied in two layers.  Almost all of that would be brown in the original scheme.  I had to sort through the parts to determine just how much of the trim needed to be painted brown.  I chose to brush paint the trim as I worked on each section.  Fortunately, I have a small stash of appropriate PolyScale paint—my old standard before it was discontinued.  I sprayed TruColor SP Colonial Yellow for the base color and then brushed my precious PolyScale over that as needed.  The PolyScale paint has a flat finish.  The TruColor paint has a gloss finish and must receive a flat overcoat before proceeding.  I had to plan carefully for that flat overspray to ensure it was done before I started installing window glazing.  Planning for paint was one of my bigger challenges for building my depot.  I ended up doing several masking and spray painting jobs as construction progressed.

I began assembly of the depot shortly after it arrived in September-October 2020.  I had to suspend depot construction as I also was involved in the high profile track project at RR-East Eugene.  I found I needed to concentrate on only one high profile job at a time.  I resumed depot construction this month—April 2022 and have now nearly completed the depot.  There are LOTS of parts to this depot kit!  Placing the now nearly-complete depot in its position at Springfield on my railroad fulfills a vision I have had since I started this layout. 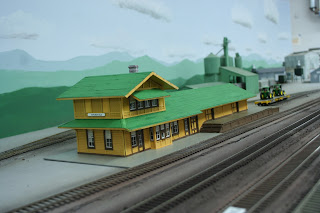 The Springfield depot in position on my railroad.  Note the louver window replacements for the upstairs end windows, as seen in photos from the 1950s and later.  Microscale decal set 87-1401 provided lettering for the station sign boards.

Posted by EspeeCascades at 9:14 PM