Now that the mainline is open for business, I need something to carry that business in!  I have been adding significantly to my boxcar fleet since the operating session earlier in the month.  http://espeecascades.blogspot.com/2015/07/second-mainline-operating-session.html  Three dozen SP and SSW lumber and insulated boxcars were pulled out of their packaging.  Most needed their trucks painted.  Some needed underbodies painted.  Many needed Kadee couplers installed.  I finally got all of them reassembled and car cards prepared.  Weathering is needed, but that will have to wait until after the upcoming NMRA National Convention—less than a month away!

The large fleet of new “standard” boxcars presented a wonderful opportunity to measure the sidings in car lengths.  All of these cars are nominal fifty feet long.  In fact, they are much longer, as all have Hydra-Cushion ™ underframes, an SP standard for the 1980s.  I set up a test train with thirty cars, a caboose and three tunnel motors for power.  The tunnel motors (SD45T-2 or SD40T-2) are the longest frame diesel locomotives I will use routinely. It was really fun seeing this train snake through all the curves I built into this railroad.  It brought back fond memories of chasing the real thing in the 1970s and ‘80s. 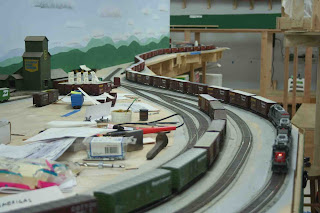 Test train rolling past the “Marcola Branch” with the rear still in Westfir.  This train was so long I could not maintain focus with the camera!

As to siding measurements, I found most were locos+28 cars+caboose, though Cruzatte was a bit tight, more like “27.5” cars.  I probably will aim for 25 car trains, as that is a convenient, arbitrary number that fits in all sidings.  That also leaves some room for helper locomotives.

On the motive power front, I found the three big units were just able to pull all thirty cars and caboose of the test train.  I stopped the train at each siding to record the length measurement.  A couple of times on the mountain grade, one of the locomotives would spin wheels until the others joined in.  This completely answered a question I have had about this railroad concerning number of powered locomotives to assign.  It looks like I need to use only two powered locomotives in each loco set, whether lead power or helper.  Anything more will overpower the train.  Best practice for mid- or rear-train helpers I have seen has been to make sure that neither the lead nor the helper locomotives are able to move the full train.  I will “dummy” locomotives to add a third unit to engine consists for visual effect.  That is in the future.  For now, it will be two unit loco sets. 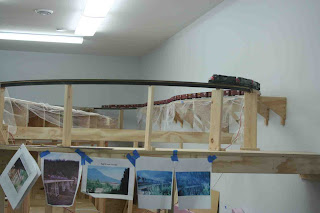 This test train operation was the first time I have run a complete train end to end on my railroad.  Some of my operating crewmembers preceded me in that.  I had run at least test locos over new sections of track being placed in service, but that had been a piecemeal operation.

I find myself shifting gears rapidly right now.  I am shifting away from intense construction to applying my efforts to operating enhancements and fine-tuning (long overdue!).  In support of the shifting work focus, I now NEED to run my own railroad!
Posted by EspeeCascades at 4:56 PM No comments:

I held the second operating session over the full mainline on Saturday, July 11, 2015.  This time I had a crew of sixteen operators plus myself and “Mr. Murphy.”  Sixteen operators are about what I estimate a “full” operating crew to be on the layout, certainly once CTC signaling and switch control are installed and a full slate of trains is on the rails.

As to “Mr. Murphy,” inevitably with so large a project, various troubles show up when subjected to stress by more than the builder (me).  Fortunately, my operating crew had a high proportion of experienced and skilled model railroaders.  Many have “been there, done that,” and knew what to do to help me out of the hole I was digging.  One took on getting new loco decoders talking to the command station.  Others helped get the intended train consists together.  The real life Amtrak engineer got my Amtrak #14 positioned at the Crescent Lake upper staging, another couple of crewmembers took on the task of fine-tuning some of my track-work.  I am grateful to all.  I did have to chase down electrical/mechanical gremlins in a few key spots and have more trouble-shooting to do.  Still, a pair of hours’ effort by the invited gang really whipped the railroad into a state that after a lunch break we could conduct formal operations as intended. 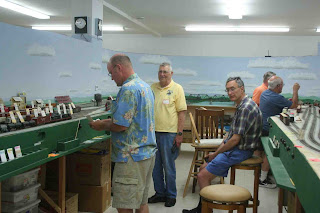 Operations at Eugene.  Yardmaster Brian P. organizes the work, while switch crews Dave. C. and Bob Y. await their orders.  In the background David B. and John B. work the First Springfield Turn.

An important activity took place while madness reigned around them.  Ex-SP Dispatcher Rick K. instructed Dave H. and Mike Y. on dispatching using Direct Traffic Control (DTC).  While many prototype railroads and model railroads use Track Warrant Control as a radio-age replacement for Timetable and Train Order (TT&TO) operations, SP used DTC.  Under DTC, the Dispatcher issues operating instructions based on track blocks.  These are operational stretches of track, not the electrical blocks we dealt with in the days of analog-DC model railroad control.

Rick K. advised me to use the system SP used in the 1980s for traffic control not covered by Centralized Traffic Control (CTC).  I readily accepted that advice.  Who am I to question such an expert?  I am blessed to have such advice and help.  Until I can install and get working the rest of the elements of my planned CTC system, we will need to use a radio traffic control system.  Going with DTC maintains the image that this model railroad is a piece of the Southern Pacific. 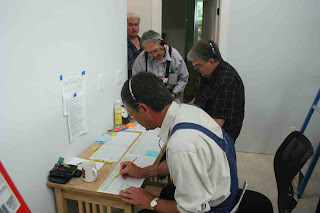 Dispatcher trainee Mike Y. issues track authority to a train while Rick K. interacts with Charlie C. with paperwork for his next train and Bob S. looks on. 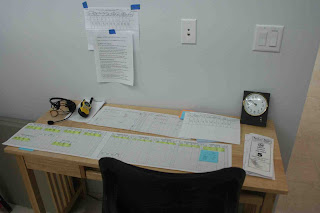 The tools of the Dispatcher using DTC: radio, train sheet, timetable, clock, and a DTC block form (mainline track schematic with block names and sidings) posted on the wall.

In the crush of effort to build my railroad, I could spend little precious time developing the operating system.  I am blessed with the resource of a real SP Dispatcher to guide me.  Indeed, Rick has done much, much more than guide me and has brought order to my insanity.   Traffic control on my HO scale SP Cascade Line maintains a Southern Pacific format and feels right.

This operating session witnessed the first real helper operation.  We had a long train at Oakridge that could serve as a test.  Chuck C. and Tom, D.  put the train together, got Dispatcher authority, and moved it up the hill.  Tom reported a few layout or equipment issues to me, but he and Chuck successfully got the train to Cascade Summit without dumping it onto the floor.  Tom then drifted back downhill with the light helpers and went “dead on the law” (hours of service) at Cruzatte.  This railroad is starting to live up to its potential! 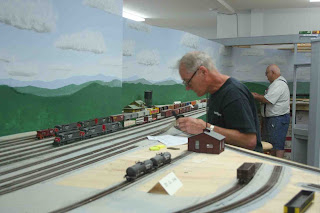 I‘ve reported some of the work on the railroad since the previous operating session a month ago—switch controls for the mountain sidings (http://espeecascades.blogspot.com/2015/06/switch-controls-for-mountain-grade_9.html) and construction of the operator’s platform for the mid part of the grade (http://espeecascades.blogspot.com/2015/06/operator-elevation-for-mountain-grade.html).

In the final push toward yesterday’s operating session, I added decoders to 22 locomotives and completed wiring switch control panels for the upper (Crescent Lake) and lower (Eugene Arrival/Departure) staging yards.  Indeed, I was making final connections the night before the operating session.  Such a push allows another opportunity for “Murphy’s Law” to reassert itself and that was the case.  The locomotive effort left me with a flock of diesel models sitting at Eugene that still had not been DCC-consisted together, but now could not even be addressed.  Part of that early session effort had David B. taking each loco back to the programming track, affirming he had control and then setting up sets of locos on the layout and consisting them.  There still are a number of gremlins lurking, but quite a few of those locos made it into service for the afternoon session. 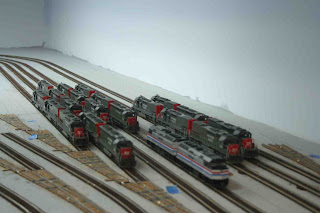 For the switch control panels, I have gone “old school” with basic toggle switch control for now.  The application is one where a diode switch control matrix or the computer software equivalent is appropriate.  Both staging loops have twelve tracks.  Right now, I simply needed to get something in place.  The simplest for me was to wire up toggle switch controls and let operators visually set up their routes.  This effort, like many on this railroad took longer than I estimated, but the job got done just in time. 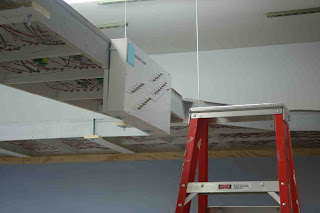 Crescent Lake switch control panel.  Sharp-eyed viewers will note what I did NOT catch in my layout and proofreading of the panel artwork.  I numbered both sets of switch ladders top to bottom 1 through 12.  Because the lower set connects to the upper set around a reverse loop, the lower set should be numbered bottom to top (reverse) with 1 to 12.  Sigh. 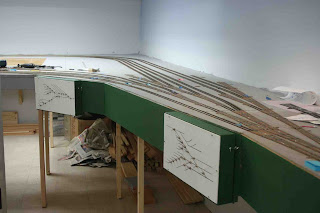 Eugene Arrival/Departure Yard panels.  Not all lines have track yet.  Labels are needed!

Objectively, I must rate the operating session a “success.”  It accomplished what I needed to see in action—operations on the full mainline conducted by an operating crew composed of much more than myself.  The stress I felt before and during the session was self-induced.  The crew rose to my challenge magnificently.  One key additional observation emerged—the aisle design is at least adequate.  There were reports of only a couple occasions of “tight clearance” between crewmembers.  In general, the aisle design affirmed my design effort.
Posted by EspeeCascades at 7:31 PM 1 comment: