Supporting documents for this operations control method are presented below.
1. Timetable (an extract of a few pages from a period SP employee timetable (ETT) plus special instructions.
2. DTC Authority Sheet (lists the individuals control blocks for the mainline with blanks for authority time).
3. A Guide to Operations with DTC.
a. Executive Summary posted July 2015
b. Extended Tutorial posted May 2017
4. Instructions for filling out a “Soup Ticket” that represents communication between a newly assigned train crew and the Dispatcher.
5. Instructions for local freight crews. 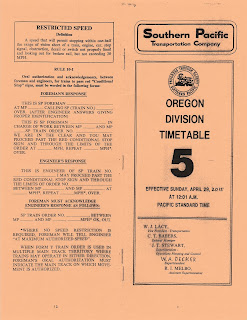 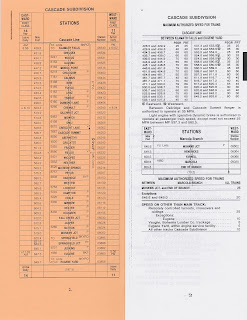 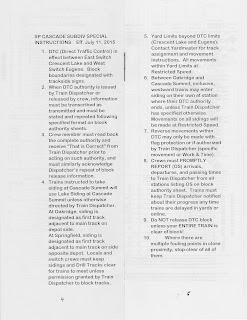 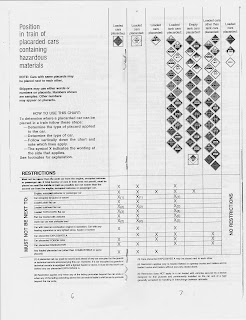 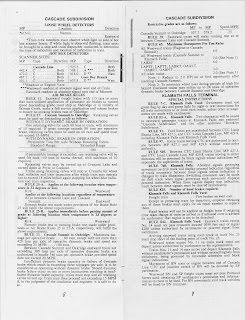 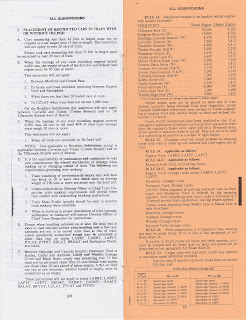 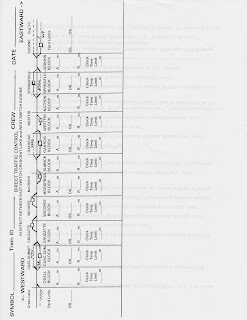 DTC is a train dispatching system where the railroad is divided into physical blocks (sections) of track and trains are authorized by the Train Dispatcher to occupy and move within these specific blocks, which may include sidings.
Trains must not occupy DTC trackage without formal authority from the Train Dispatcher and must promptly release blocks that are vacated.
Movement/occupancy authority may be Uni-Directional, or Bi- Directional and may also contain the following endorsements:
1. Via Main Track and/or via/take Siding (if controlled siding within that block).
2. Sole or Joint Authority within that block (Joint will include information about who you’re sharing that block with, and requires you to operate at Restricted Speed within that block).
3. “Behind” a movement that is past you and that’s leaving the block in opposite direction to your travel.
To request block authority, Train or Engine Crew must contact Dispatcher, identifying their Train by engine number and stating their direction of travel (or requesting Clock Time for bi- directional authority in that block).
Dispatcher will issue authority, Crew must repeat back the specifics and cannot act on the Authority until Dispatcher states “That is Correct”.


Crew will promptly release Block Authority when their train is completely clear of block trackage (not just the head end), and
must acknowledge correct repeat by Train Dispatcher of block release name and time released.


Reverse movements within a DTC block (by rear of train) are not permitted without specific authority from Train Dispatcher unless train already has
Clock Time bi-directional authority.

CONCEPTS:
DTC is a system that provides Dispatcher control of a railroad
by verbally authorizing trains to occupy specific blocks (segments) of main track.

DTC BLOCKS are pre-established (as opposed to TWC or TTTO operation where the Dispatcher specifies authority limits when the authority is issued).
A basic premise of DTC operation in non-signaled territory is
ONE TRAIN PER BLOCK (there is an exception that we’ll get to later*).   A block may be authorized for a train ONLY if NO OTHER movement  has been authorized in that block.

BLOCK BOUNDARIES are indicated by trackside SIGNS which may be at fouling points but not every fouling point is a boundary, and boundaries may also exist elsewhere like between stations.

SIDINGS are NOT controlled (trains must move at RESTRICTED SPEED (prepared to stop short of obstructions…) on sidings).

REVERSE MOVEMENTS are NOT PERMITTED without permission from Train Dispatcher (unless train has Work & Time in block).
Normal authorization specifies DIRECTION of movement permitted, Work & Time provides Bi-Directional Authority.   *JOINT Work & Time requires ALL movements in limits to be at RESTRICTED SPEED.

A train may be authorized to occupy a DTC Block BEHIND another train (after a meet) when train met has not yet RELEASED block but has passed location where first train will enter main track.

Communication to/from Train Dispatcher is via radio.  Crews must be alert for calls from the Train Dispatcher (know your engine number!) so that you can REPLY PROMPTLY if radio is clear of other traffic.

Like TTTO and TWC, instructions must be written down, read back, and “that is correct” received before instructions are acted upon, this also applies to block releases repeated back by the Dispatcher.
Crews need to specify time of block releases, not rely on Dispatcher to read clock.  Dispatcher and Crews will state Crewmember’s title and name who copy and release authority (“Engineer Clune”).

PLEASE RELEASE BLOCKS PROMPTLY to allow other trains to proceed (but be certain that your train is completely clear of block).

Speaking of terminals, please see no failure to OS (report) your departure time from originating terminal and arrival time at terminating point to the Dispatcher to record on Trainsheet.  This includes helpers returning lite and locals.
The Dispatcher may ask you for times at other stations.

RAILROAD WEST is TOWARD SAN FRANCISCO, UPHILL.
(Running Eugene Yard up the hill to Crescent Lake is westward.)
The Train Dispatcher’s call is “SP HILL DISPATCHER EUGENE”.
If your identifying locomotive is an SSW unit, it is still identified as “SP”.  If you have a “foreign” unit, then add those reporting marks.

IMPORTANT:  Only THREE STATIONS on the layout have a SEPARATE BLOCK for main track between siding switches: Springfield, Oakridge, and Cascade Summit.  All other DTC BLOCKS include MAIN TRACK AT NAMED STATION  (see Bill’s diagram!).
Those DTC BLOCKS extend WESTWARD from their stations.

Terminals:
EUGENE terminal is under direction of a YARDMASTER and a SANTA CLARA TOWER OPERATOR.  Eastward trains should check with YARDMASTER when entering JUDKINS BLOCK to ascertain route into YARD LIMITS at end of DTC at west switch Eugene.  (Note that EUGENE is “downtown”, the west end of the yard complex, whereas EUGENE YARD is at the east end, the staging area.)

CRESCENT LAKE does NOT have a YARDMASTER, trains should check to see what other movements are going on at Crescent Lake when approaching from ODELL BLOCK, inbound crews need to select suitable arrival track and line their own turnouts.

Don’t call the Train Dispatcher about what to do at Eugene, Eugene Yard, nor Crescent Lake, but please be sure to report your departure and arrival times to the Dispatcher and release your DTC BLOCKS.


CREWS SHOULD PROMPTLY PASS SOUP TICKETS to the TRAIN DISPATCHER so that Dispatcher can log train onto Trainsheet and issue DTC authority.  Authority won’t be issued until ticket is received by Train Dispatcher. (Aux. Sheets explain Train Symbols)


ASAP after train is called,


Please fill out a colored* sticky tab with following FOUR pieces of critical info and deliver ASAP to the Train Dispatcher:

DELIVER THIS TO DS ASAP!  TNX!

Switch Westfir on the way “back” to Eugene.

Switches industry on the DEPOT side of the main in Springfield.

May use Marcola Branch as a switch lead (RR-West).  House track, and Oil Spur should provide for RR-East switch lead.

Switch aisle side of main in Springfield.

Booth-Kelley (Georgia Pacific) has FOUR spurs.  Two of these are chip tracks.

Get Dispatcher mainline authority at RR-West to switch Springfield Rock.  Otherwise, no need for mainline.

Switch industries in Eugene under general supervision of Eugene Yardmaster.

Best to make all of the pulls first.  Start making set-outs when released by the Eugene YM.

Stay clear of the mainline and be prepared to clear up as required for mainline traffic.