In spite of good intentions and even fairly good execution, the design of my railroad inevitably produced a few difficult locations for track maintenance.  My September 2022 operating session emphasized the critical need to attack one of those tight space maintenance tasks.  My Crescent Lake staging yard features twelve tracks within a reverse loop.  The turnout ladder for the “West” end of the yard extends beneath the basement stairwell as the track passes from the main room to the “back” room where both levels of staging reside.  The switch for the number two track had caused trouble in June.  I thought my bit of work on this switch had fixed the problem, but the September session proved otherwise. 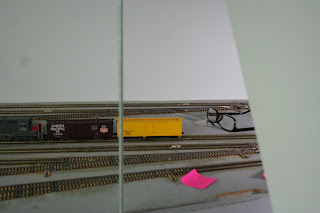 The Switch for Westbound entry to Crescent Lake Track Two is located just above the yellow track cleaner box car and alongside the reading glasses.  Note the stairwell covering descending from the ceiling to the right.

I pulled out my track tools and a step ladder.  I had to closely examine the troublesome switch in a very awkward space, some 7.5 feet above the floor and under the stairwell covering.  Close inspection with added lighting, vision enhancements, and an NMRA gauge quickly showed two problems.  The first was that the points were not throwing all the way over for entry to Track Two.  The second issue was too wide a distance between the guardrail on the stock rail for the frog and the frog itself.  For both problems, I can only note that things change over time, as neither had been an issue until recent operating sessions.

Having identified the problems, the solutions were relatively straight-forward, albeit accomplished in the tight space.   The frog guardrail required a simple application of soldering iron heat and a slight shift of the guardrail. 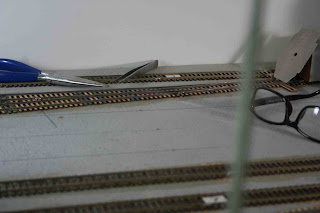 The offending guard rail is pointed to by the needle nose pliers and tweezers.

The switch machine required opening up the main wiring termination panel for Crescent Lake.  I was able to slide the Tortoise by Circuitron™ switch machine fulcrum tab downward on the machine to increase the throw-rod throw.  With increased force on the points I added spikes on the outside of the stock rails at the points to help keep the rails in place. 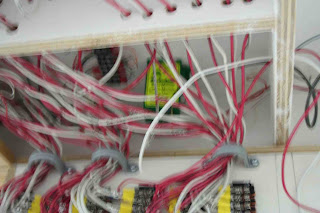 This low-light, jiggled picture illustrates the problem of getting into the switch machine for adjustments.  The switch machine is the green block with a yellow label up under the maze of wire.

My staging and track cleaning efforts through this switch indicate my repairs were successful.  This is all part of what it takes to have an operating model railroad.

Posted by EspeeCascades at 7:56 PM No comments: