An important aspect of modeling an actual location is access to historic and technical research materials.  For an SP-based layout, this begins with the Southern Pacific Historical and Technical Society.  The Society  web address is: http://sphts.org/  This is a great place to begin, as the website has links to many websites.  The Society publishes a number of books, notably the SP Passenger Car series (five volumes) and several other books on SP subjects.

The society has entered into the scale model production business with acquisition of the former Red Caboose dies for the F-70-7 flat car.  Additional die molds have been created, now covering three bulkhead types, including the “definitive” 1962 bulkhead with an 8’-6” height above the flat deck.  A new kit released at the SPH&TS convention in Ventura is for an F-70-10 welded flat car with deck and parts for the early trailer on flat car (TOFC) conversions of the mid-1950’s.  Check the SPHTS website for details.

As has been my custom for a number of years, I attended the SPH&TS Annual Convention.  This year it was held in Ventura, CA, October 10-13.  Convention Co-Chairmen Dave Coscia and Bruce Morden put on a good convention with a focus on the SP Coast Line.  Most conventions try to focus much of their presentations and tours on aspects of the SP in the immediate area of the convention venue.  Highlights this year included tours of facilities and railroad attractions near Ventura, CA.  Thursday featured morning presentations on the citrus industry along the Santa Paula Branch and SP depots of Ventura County.  This was followed in the afternoon by a train ride on the former Santa Paula Branch, now operated by the Fillmore and Western. 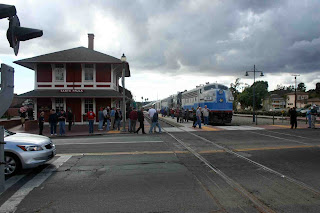 Friday featured a full slate of presentations, most with a focus on the SP Coast Line or operations along it.  Of particular note was PFE modeler Dick Harley’s excellent two-part presentation on PFE’s mechanical refrigerator cars and how to model significant classes from the Red Caboose and Intermountain kits.  Scott Inman presented on detail enhancements to an MTH SP Daylight articulated chair car for a mid-1950’s appearance..

Saturday featured two outstanding slide shows.  John Roskoski’s  “Surf” show, first seen (and repeated since) at Winterail many years ago, reminded us of the SP Coast Line during a glorious period of traffic activity in the 1970’s and 80’s.  This show ranks at the very top of rail slide and music shows.  Should you ever get a chance to see it, drop all else and DO IT!  Saturday afternoon featured Charlie Lang’s “Milepost Memories #3” with pictures he shot around Santa Barbara in the 1970’s-80’s.  This was another good show, further reminding us of the SP that once was.

The SPH&TS Conventions are an excellent source of information and networking.  I find myself now going more for the people connections than the excellent information presented.  Both are important, but rubbing shoulders with fellow SP enthusiasts creates a special charge of personal enthusiasm for getting back to the layout and model construction.

The SPH&TS Convention wrapped up with “going home” layout tours on Sunday.  Four layout locations were on my “bucket list” for this convention.  My regular SP travel companion and I started at Bruce Morden’s “Santa Barbara Subdivision” layout: http://spsbsub.blogspot.com/  Bruce is a long-time friend from SP and Layout Design SIG meets.  I finally got a chance to see his layout in person. 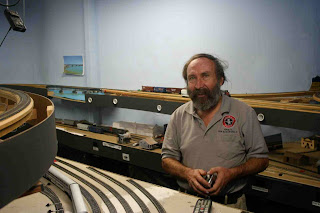 Bruce Morden and his SP Santa Barabara Subdivision layout.  Carpenteria is on lower deck behind Bruce.  Surf is on the upper level.

Next up were the pair of layouts at Gary Siegal’s home.  Inside was his HO-scale L&N Eastern Kentucky Division.  Though not SP, this is an excellent rendition of a time and place with good model railroad operations.  Outside, Gary has created a marvelous G-gauge layout representing a “what if?” the SP had retained and operated the Santa Cruz (former South Pacific Coast) line over the Santa Cruz mountains into the 1970’s.  I’ve known of Gary’s work for a long time via articles and his regular attendance at the Bay Area LDSIG/OpSIG meets.  It was great to finally get a chance to see both layouts in person. 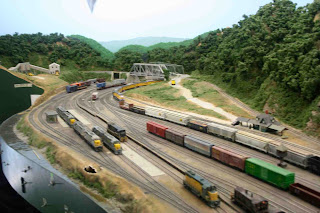 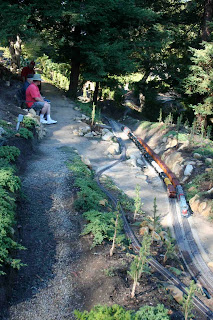 For our next layout, we had to backtrack through Ventura to get to Jon Cure’s HO-scale SP Inyo Subdivision.  Jon has another “what if?” railroad featuring the former narrow gauge line, now standard-gauged in the Owens Valley and over Montgomery Pass.  Jon has a good operating model railroad with lots of industry tied to that area. 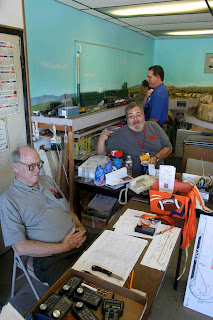 Finally, I separately arranged to visit Jeff Abbott’s N-scale Espee Oregon Division.  I met Jeff through his blog: http://espeeoregondivision.blogspot.com/  Jeff and I share an interest and passion for the SP Cascade Line.  Jeff has done an outstanding job of capturing the look and feel of the climb up over the Cascades.  He even has his signal system up and working! 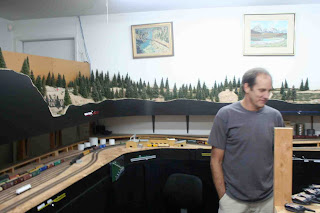 The trip to Ventura and back consumed most of the past two weeks, but it was well worth it for the information gathered, old friendships renewed and new friends made, and layouts toured.  I continue to find such meets and visits recharge my creative batteries, making me eager to get back to my own model work.
Posted by EspeeCascades at 6:40 PM No comments:

My plan for the HO scale SP Cascade Line features a “C”-shaped peninsula that forms the “Valley Core.” (http://www.blogger.com/blogger.g?blogID=1100386727262758268#editor/target=post;postID=8623016313855752576)
The Oakridge and Eugene Depot scenes are separated by a backdrop which continues to wind through the middle of the peninsula as it curves around to Springfield.  This backdrop spine needed to be installed before track laying.  Indeed, I spent a fair bit of time up on the subroadbed “table” installing the back drop frame work, sheathing that frame with hardboard panels, spackling the joints and applying a first coat of paint.  Far better to do all that work now before track gets underfoot.

The backdrop spine was formed from strips of plywood cut to 2 ¼” wide.  Much of the spine is straight, but it does include the broad curve separating the Willamette River crossing from RR-East Oakridge and Westfir.  I also placed an “S”-curve in the section between the Eugene Depot and Oakridge Depot scenes.  Top and bottom pieces for the frame were cut from two slabs of plywood, joined temporarily by screws.  As seen in the photos, the frame is a simple box frame of top and bottom pieces joined by straight vertical pieces.  The backdrop is 3 feet high on top of the 48” benchwork and roadbed base level. 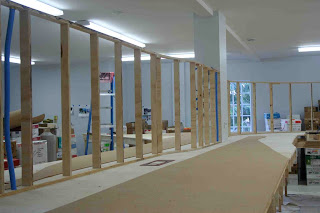 Even at the framing stage, the introduction of the curve sections, including the “S”-curve provided a fairly rigid structure.

Another feature of the backdrop frame is the installation of conduit to provide electrical runs to the top of the backdrop.  These will be used for signal repeaters.  A couple of conduits at the basement’s central post will be used for the NCE throttle radio antenna and for a fast clock to be mounted on the post.  The conduits are made of sections of “smurf” tube (named for the blue color) that I had left over from a cable run installed in the basement ceiling as the house was built.  The conduit width (installation hole is 1 1/8”) set the overall width of the backdrop spine at 2 ¼”, leaving adequate material on either side of the installation holes. 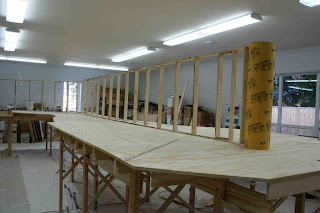 The backdrop spine running down the Springfield peninsula needed to be terminated.  At the suggestion of Seth N., after a visit , I elected to flare out the backdrop to a relatively broad cylinder as a terminator.  I used a concrete pier form, which is 8 inches wide.  One cannot see both sides of the backdrop simultaneously.  Indeed, one cannot look directly down the plane of the backdrop.

The backdrop is sheathed using 1/8” tempered hardboard.  I chose this “old school” technique because I was well familiar with it and willing to do the joint filling work.  The backdrop is quite long, so joints would have been necessary for most any material.  The Springfield peninsula backdrop terminator is sheathed with a scrap of vinyl flooring, using the smooth underside of the flooring on the outside. 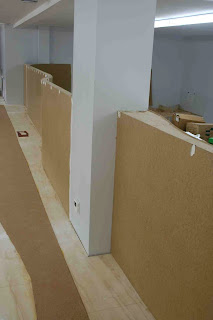 Backdrop spine with hardboard sheathing.  The backdrop “S”-curve between the Eugene Depot and Oakridge scenes is shown.  Also shown is a flare on the Oakridge side that meets the edge of the main house support post.

I started by attaching the hardboard panels to the top of the spine with wood screws.  The bottom and some of the edges were attached using 5/8” brads with a staple-brad gun.  I eventually tired of being super-careful with the screws and attached most panels with the brads.  These mechanical attachments were needed only long enough to allow the construction adhesive applied to the framework to set.  The problem with the screws is that 1/8” hardboard does not leave much margin for the screw countersink while still leaving enough material to hold it all together.

After at least two coats of vinyl spackle and sanding, the backdrop was ready for paint.  I primed the backdrop using the same light blue applied to the basement walls.  The color used is actually about halfway between the sky color well above the horizon and the almost white haze layer seen closer to the horizon.  As such, it is a good primer.  The fade between “upper” sky blue and horizon haze will be a project in the near future. 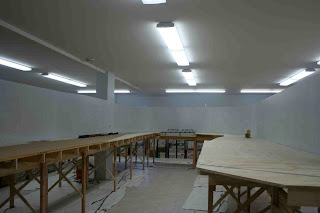 Backdrop with first coat of primer.  A modest-length train has been placed into the Eugene Depot area to help with visual scaling.
Posted by EspeeCascades at 9:22 PM 1 comment: