CLIMBING OUT OF OAKRIDGE

With the central core of the railroad settling into operations, I have begun construction of the rest of the railroad.  I previously posted on Cascade Summit. http://espeecascades.blogspot.com/2014/07/laying-out-cascade-summit.html
http://espeecascades.blogspot.com/2014/07/cascade-summit-track-laid.html
Now, I have begun the mountain climb up out of Oakridge.

Continuing on from my first foray into spline construction (http://espeecascades.blogspot.com/2014/01/expanding-world.html), I built supporting benchwork and laid spline up the wall and around the corner into McCredie Springs.  I use “traditional” spline cut from nominal ¼ inch thick hardboard.  Yes, it is messy with the glue, and it takes a bit of time (each successive spline layer needs to be clamped while the glue sets), but the results are good and utilize materials easily obtained.  The resulting subroadbed has very natural, flowing curves and is quite strong. 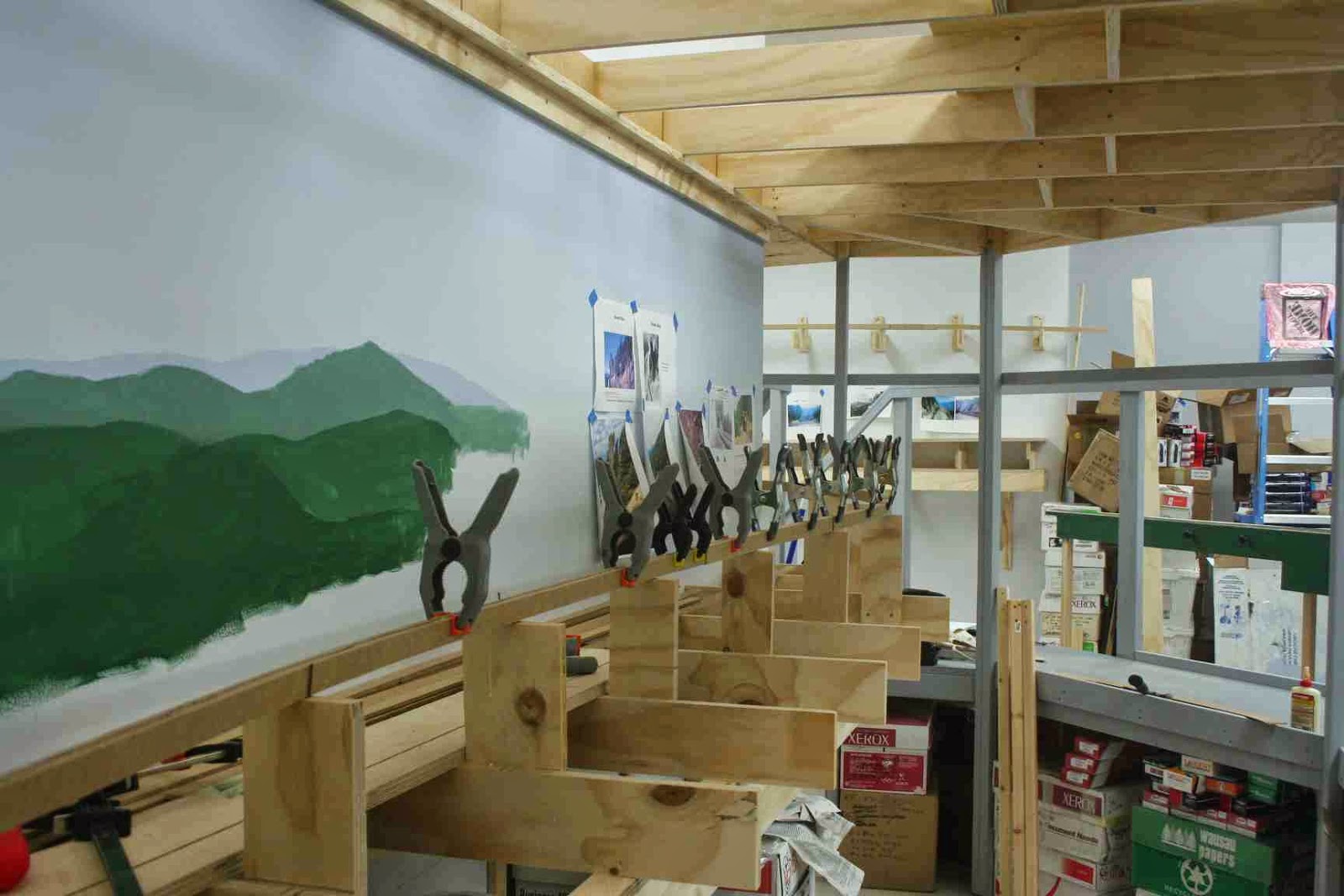 Around the corner and into the nook, I am building McCredie Springs on plywood.  McCredie Springs features a standard SP company “village”--train order station, operator houses, section chief and section crew housing and a signal maintainer’s house.  I will add a rock bunker in a corner of the nook.  Though quarries in the area were not rail served, there were quite a few.  I chose to bend history and add a rail-served quarry with its rock bunker.  With all of these structures and extra tracks, I chose to use plywood for the subroadbed to cover the needed space and provide support.  The center spline of the mainline subroadbed keys into a slot cut into the edge of the plywood. 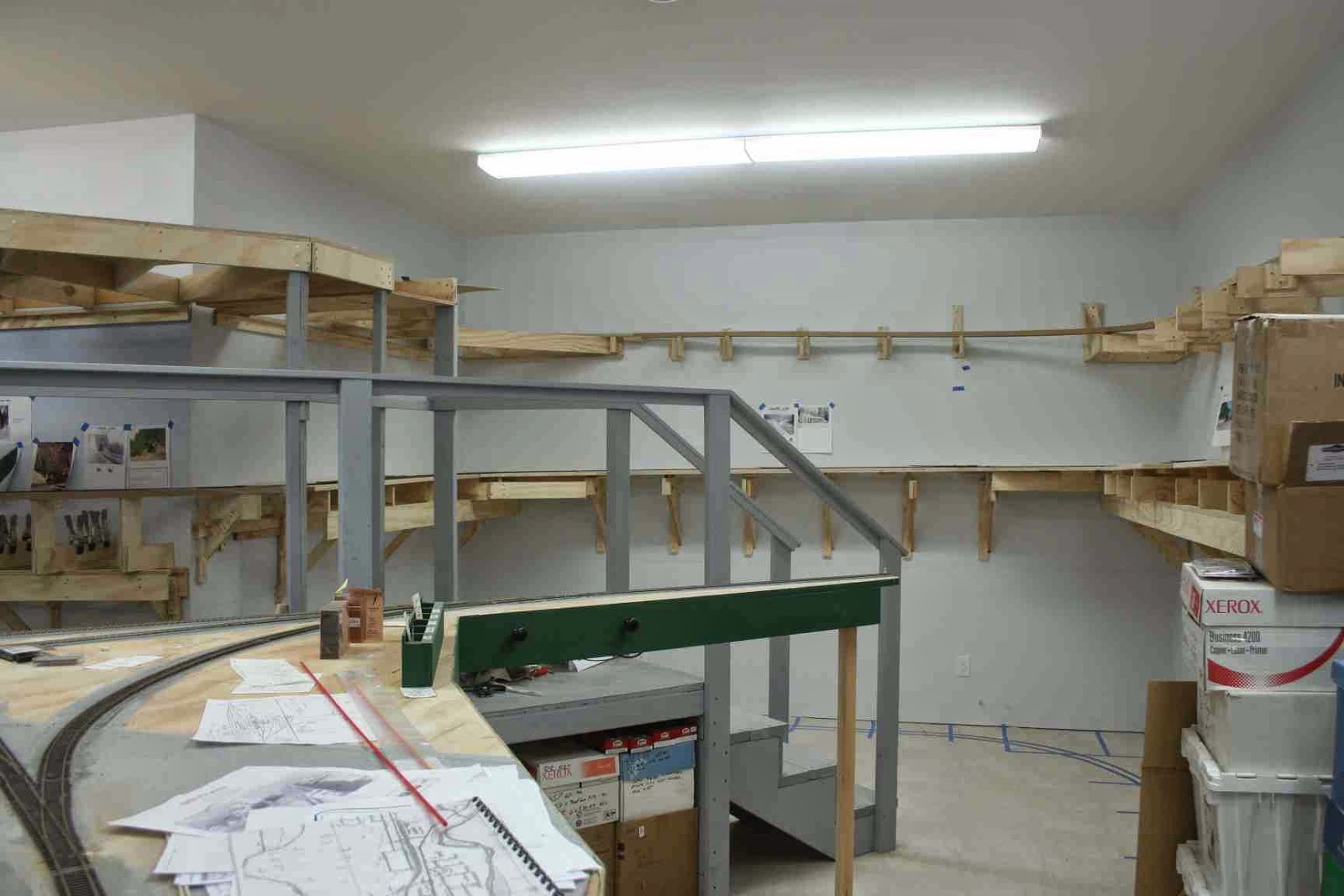 Overview of construction in the Nook.  McCredie Springs is on the lower deck plywood.  Two-plus feet above that is the roadbed for the grade descending from Cascade Summit.

I use Midwest Products cork roadbed.  On the spline subroadbed sections, I sandwich tulle fabric (bridal veil material) between the cork and the subroadbed spline.  This serves as an equipment catcher during construction and testing.  Later, it will serve as part of the scenery.  The cork is glued directly to the plywood where the ply serves as the subroadbed. 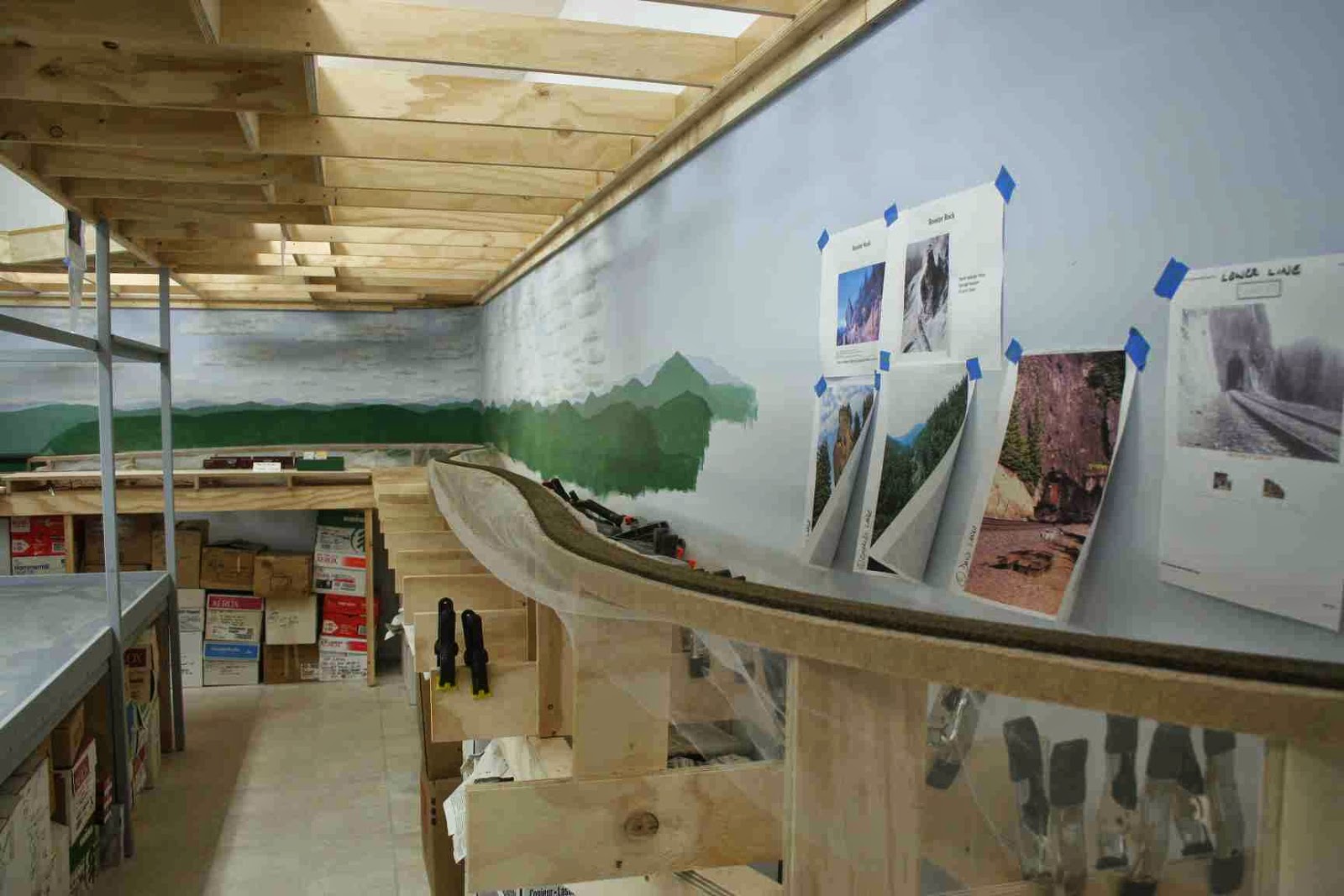 Mountain grade up out of Oakridge (off the left).  Cork roadbed has been glued to the hardboard spline.  Tulle (veil) fabric is sandwiched between the roadbed and subroadbed. 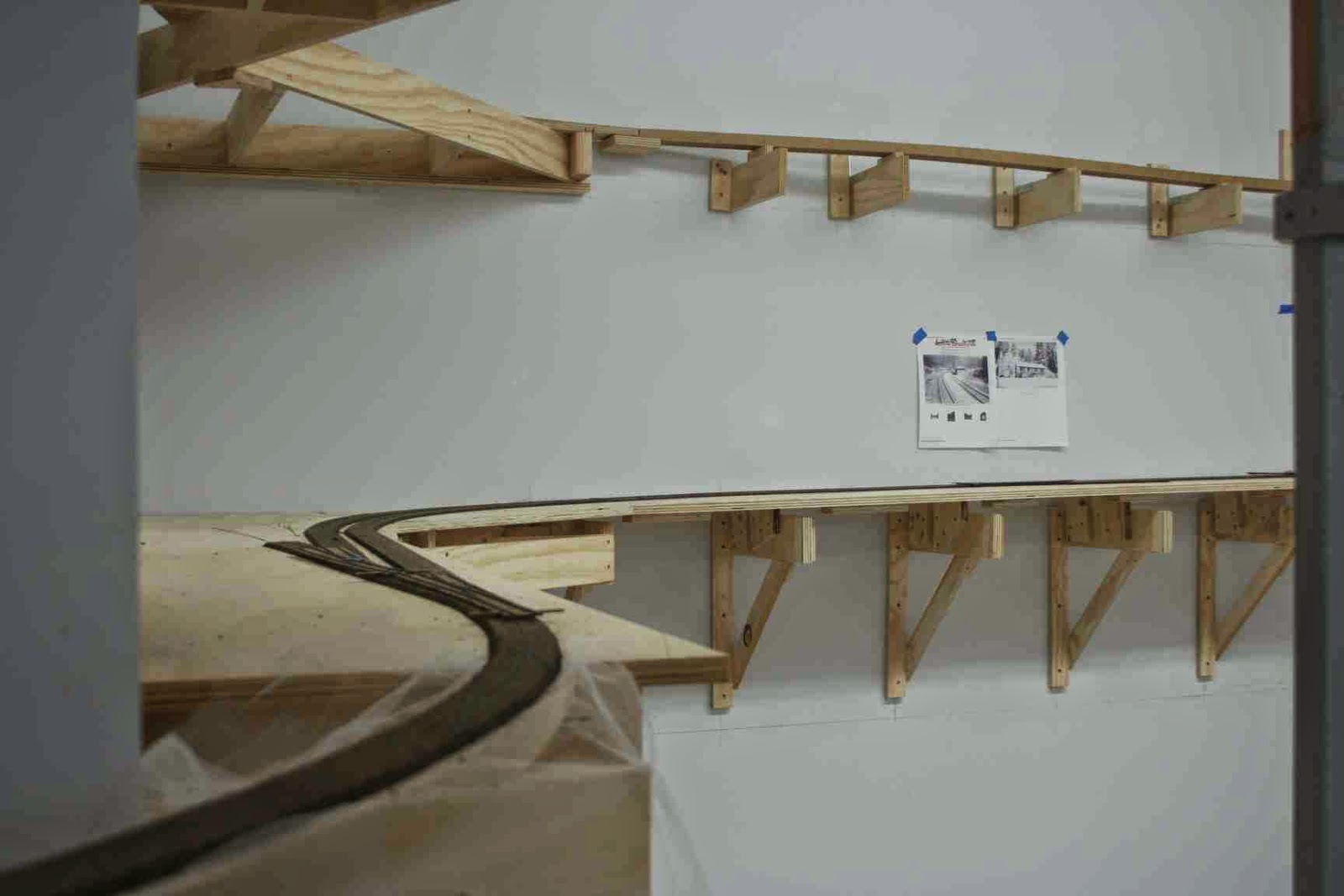 Roadbed entering McCredie Springs, up from Oakridge.  The rock bunker will be located in the corner to the right of the photo.

As I laid out McCredie Springs, I eventually went back to primary research material for the track layout.  This was after I had plowed ahead with what I “thought” the track pattern was.  Inspection of the few historic photos and the SP valuation maps quickly showed I had missed the correct location of the house track and an additional “track number 3” on the outside of the curve.  I ended up adding a bit more plywood to expand the supporting “ground.”  Lots of splice plates and biscuit joints were added! 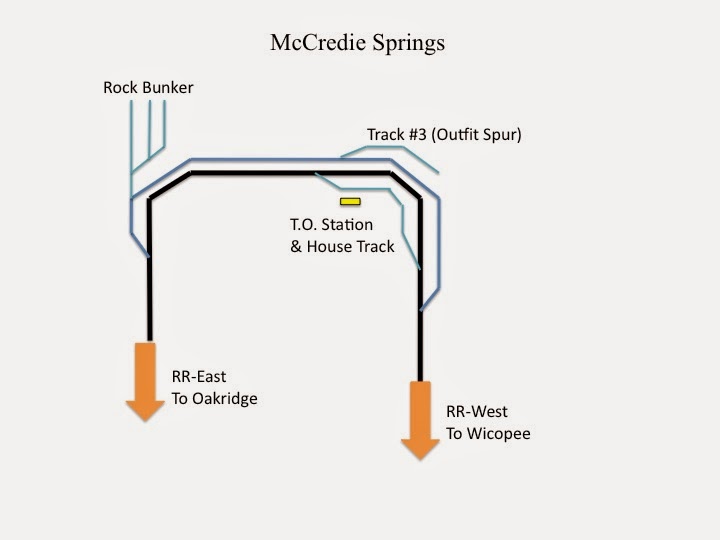 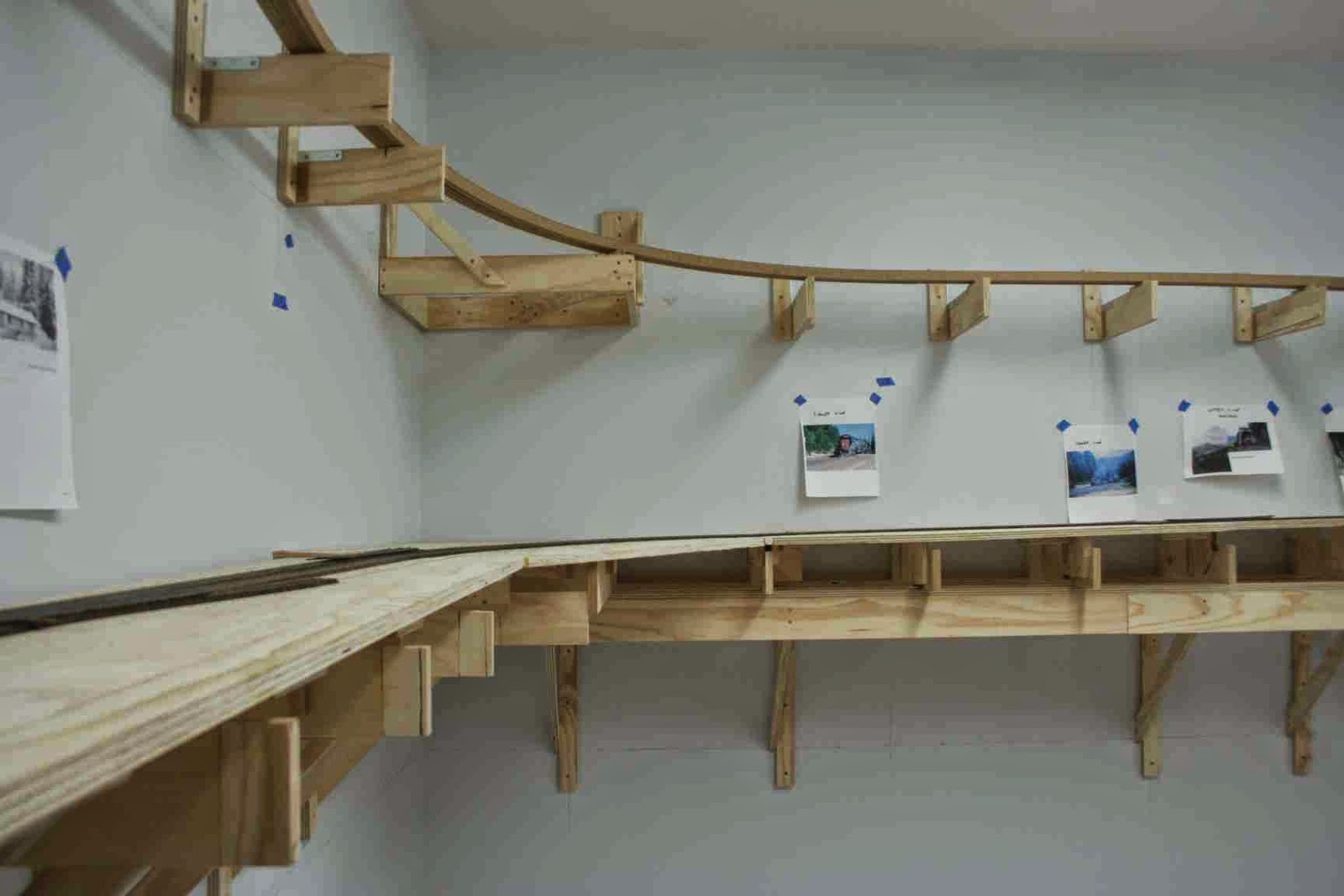 Continuing upgrade (RR-West) through McCredie Springs.  The house track branches off the mainline to the right.  Further back, track number 3 branches off to the left of the siding.

Benchwork construction techniques are illustrated in the photos.  McCredie Springs sits on two pair of L-girders plus additional wall brackets.  The upper level roadbed rests on simple wall brackets, reinforced with steel corner brackets.  The corners use a basic box grid with a diagonal brace—better aligned with the curve being supported.  The mountain grade now features both a descending upper line and a climbing lower line.  The two lines are about 24 inches apart in height at the RR-West end of McCredie Springs.  They will join on the turn-back loop that will be supported by Salt Creek Trestle.  Salt Creek Trestle is a signature scene.  Photos I shot there are what I use for inspiration and as the background for this blog.
Posted by EspeeCascades at 3:56 PM No comments:

THE RAILROAD AT YEAR TWO

Prompted by a recent post on friend Bruce M’s SP Santa Barbara Sub blog (http://spsbsub.blogspot.com/ ), I was struck by how much work has been accomplished on my layout in the past year.  Last year’s review can be seen at: http://espeecascades.blogspot.com/2013/08/the-railroad-at-year-one.html  Herewith a photo tour of my HO scale SP Cascade Line as it stands at the beginning of August after two years of construction. 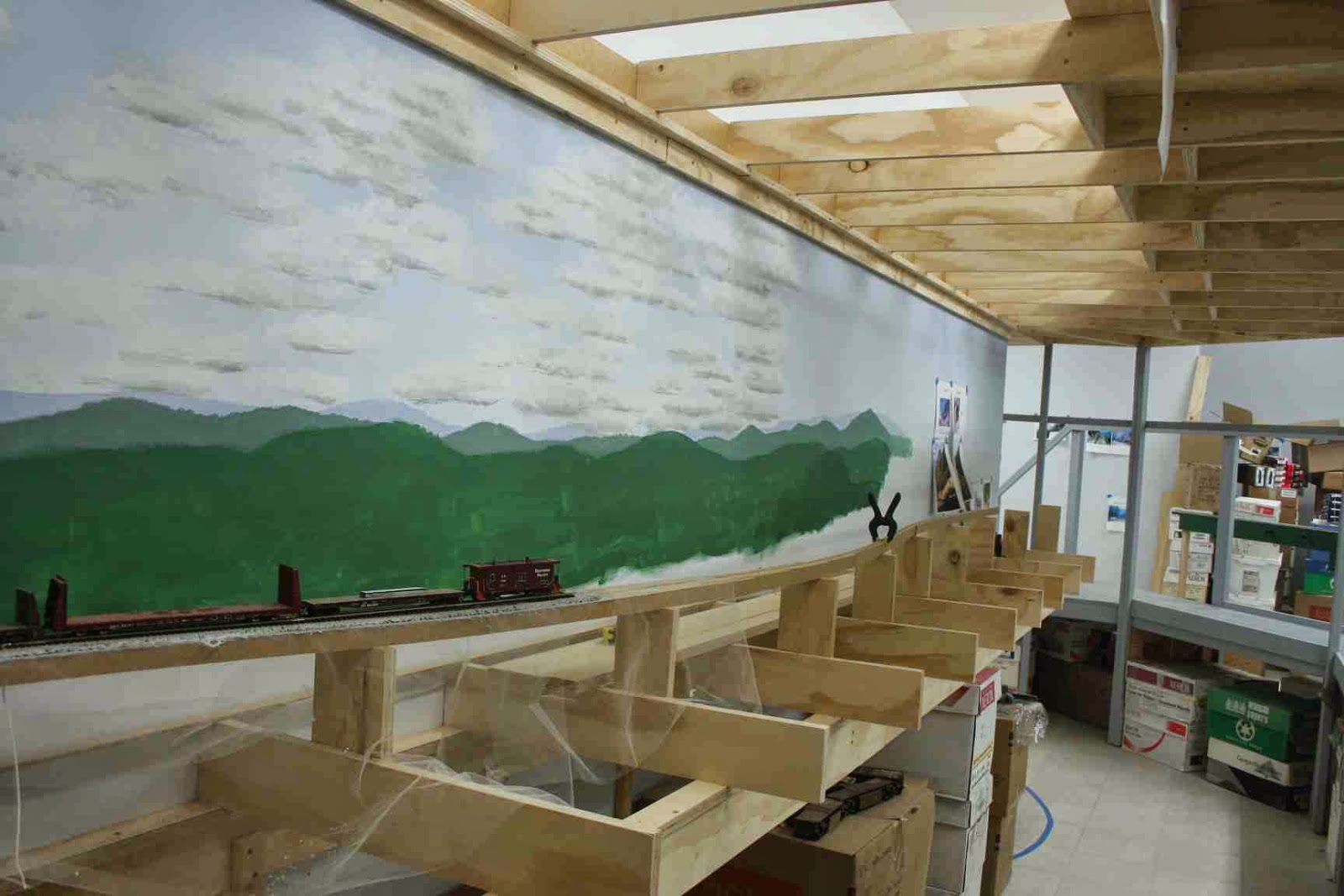 RR-West end of line.  The climb out of Oakridge is a bit more than a train length. 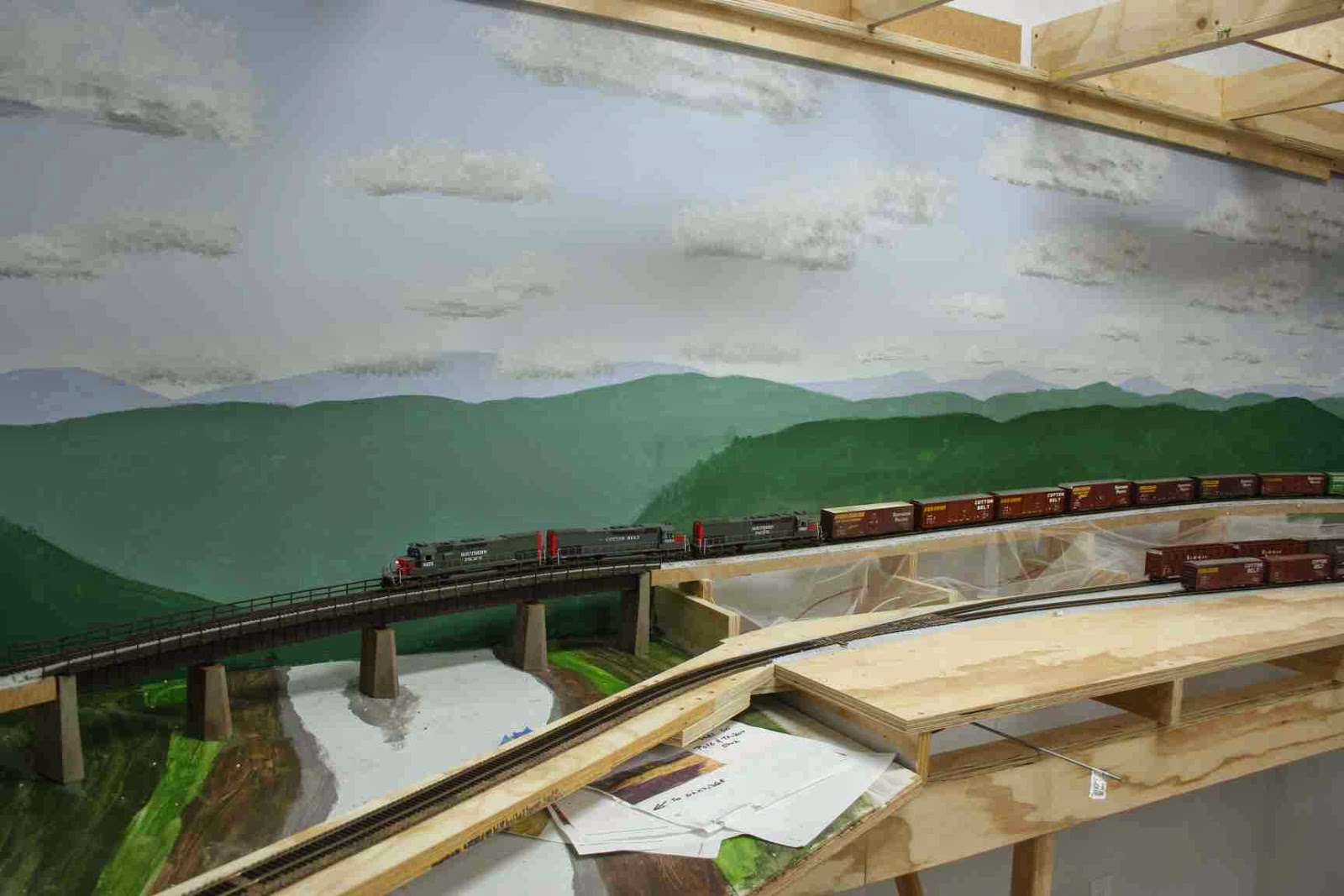 SP X8572 East crosses Salmon Creek on its way downgrade toward Oakridge.  A pair of industry spurs hold cars for the Pope and Talbot lumber mill geographic east of Oakridge. 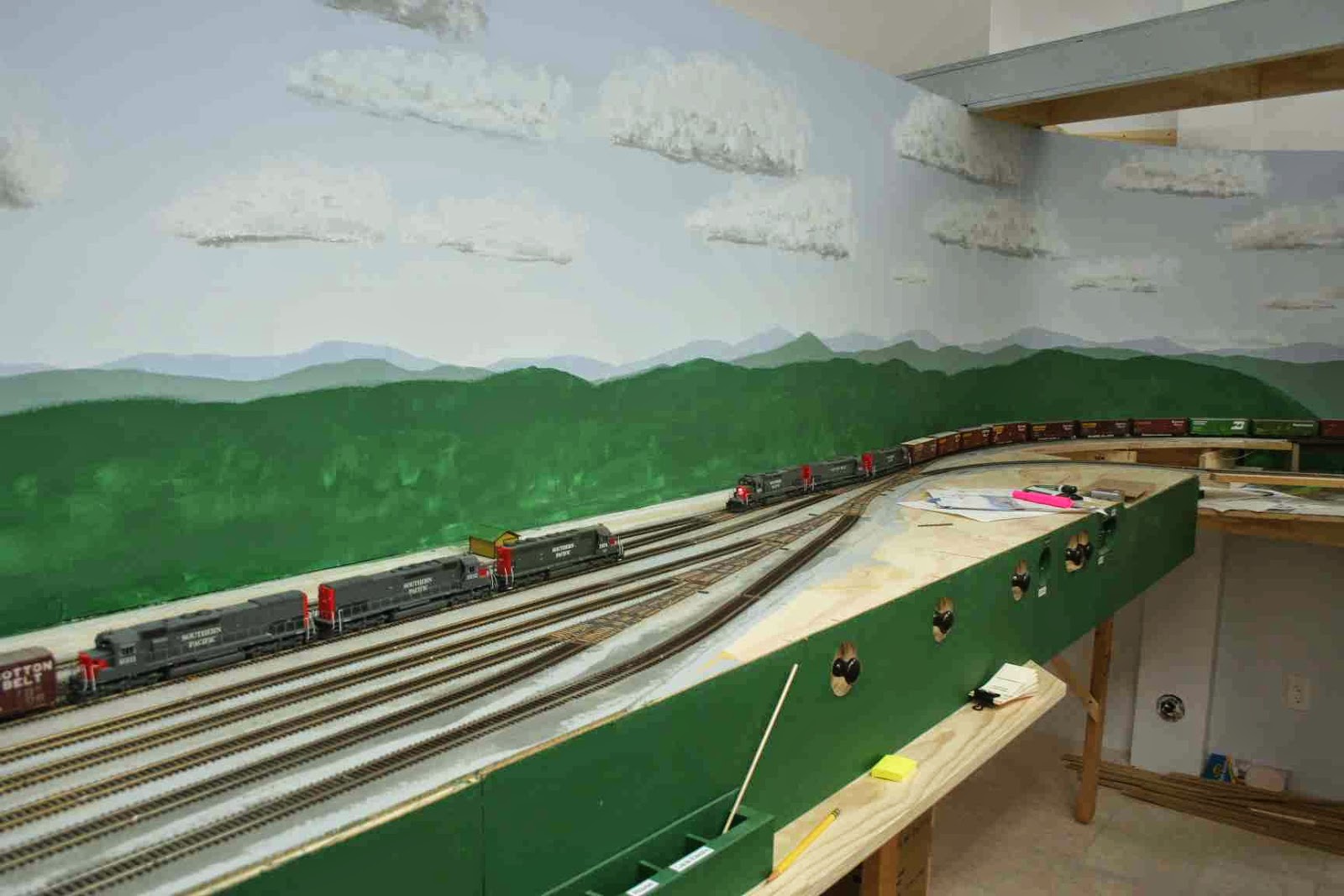 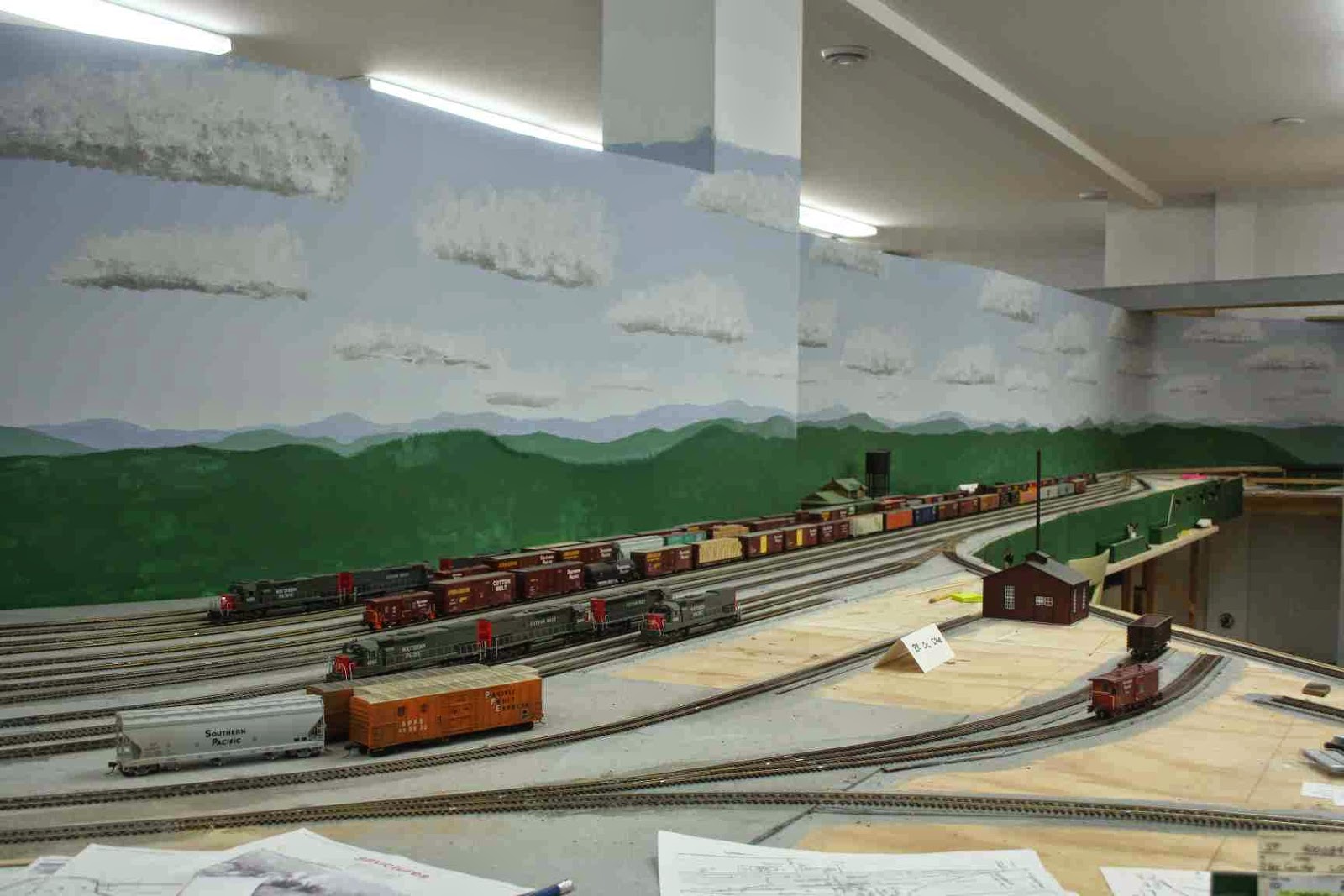 SP X8572 East proceeds on the siding through Oakridge.  A stand-in depot (an American Model Builders SP Type 22) serves Oakridge until a proper hipped-roof version arrives.  Tracks for the steam ear engine facilities and turning wye are in the foreground.  In my world, those facilities will remain to serve diesel helpers.  An ALW Lines boiler house stands at the end of the oil spur. 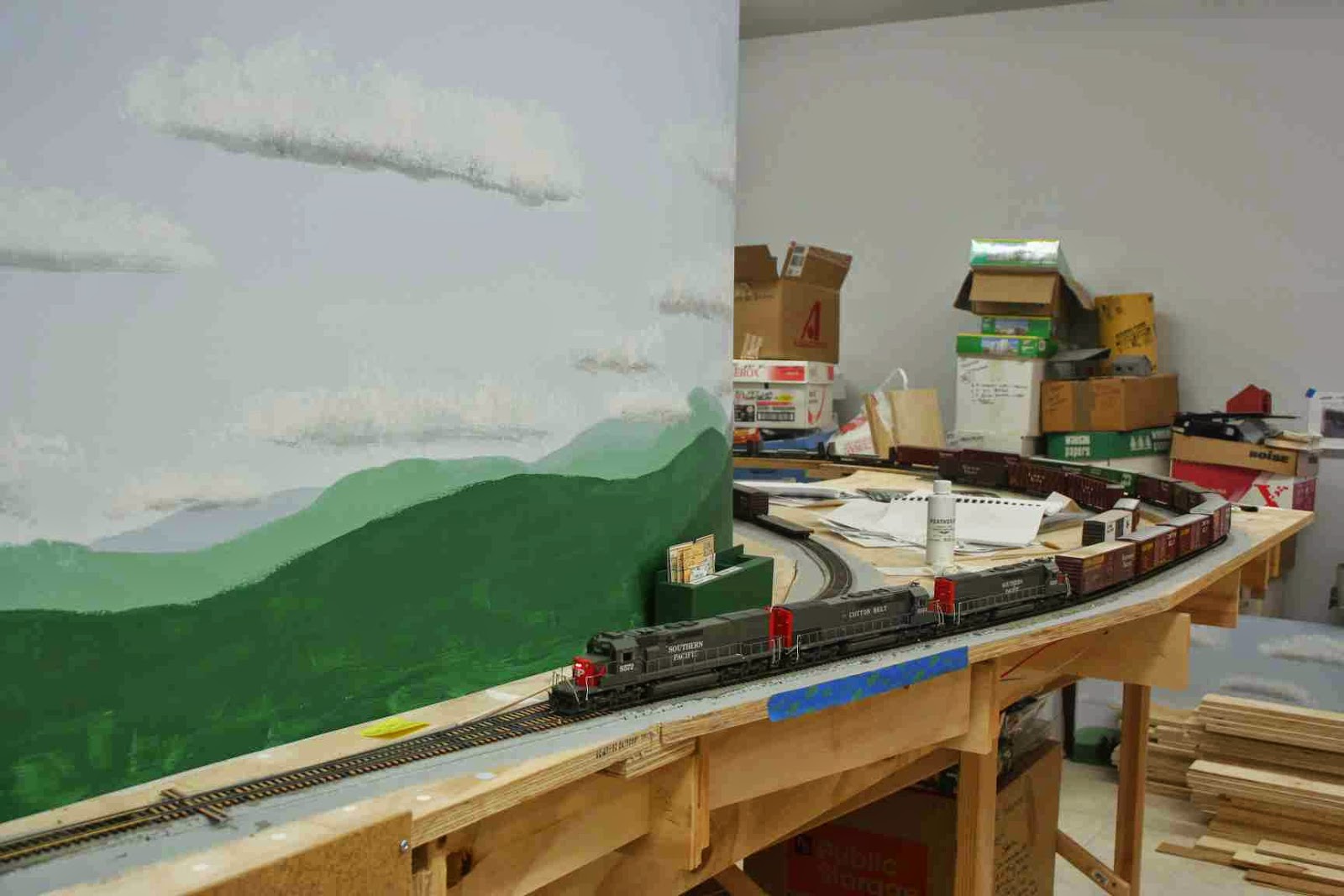 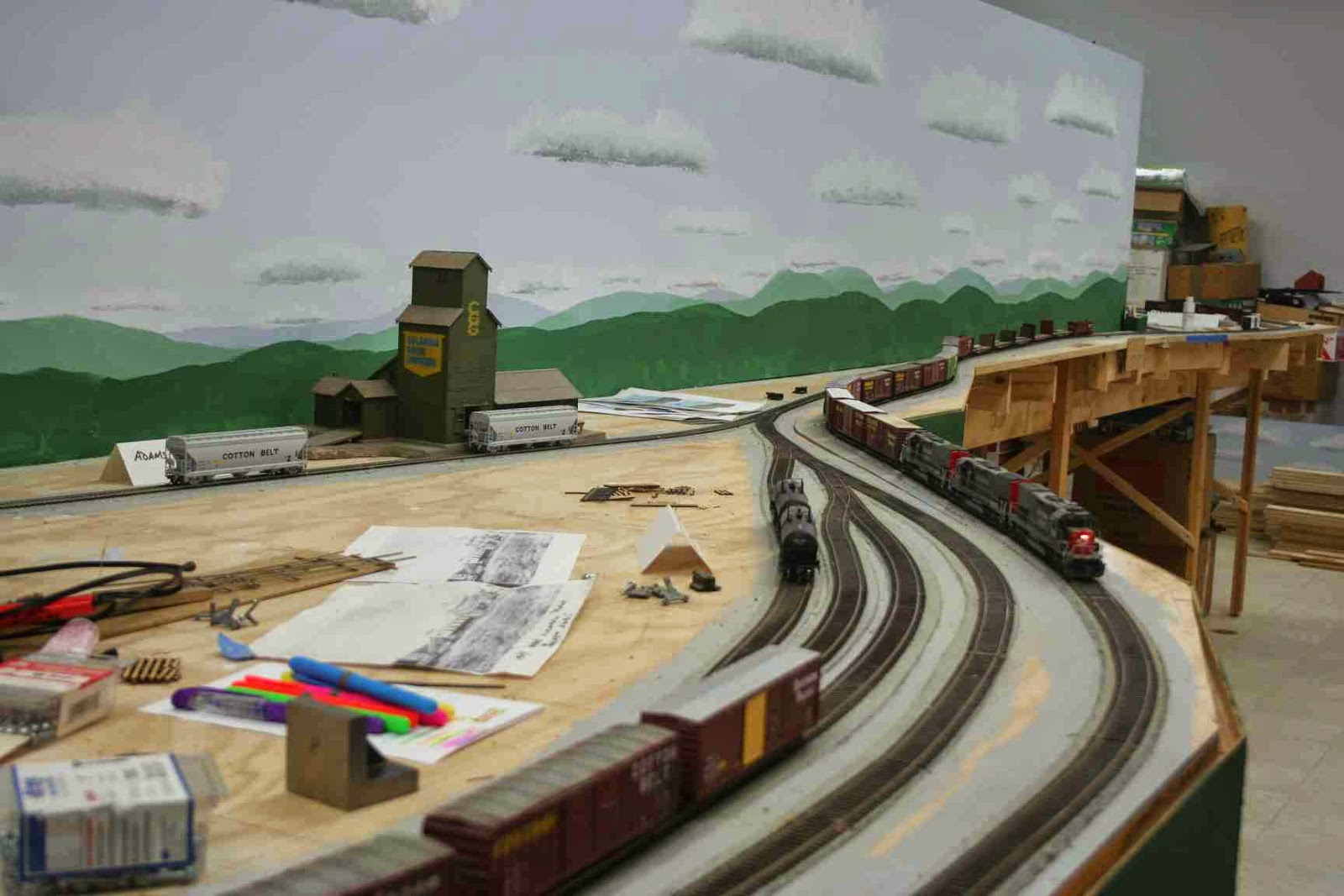 SP X8572 East rolls past the Marcola Branch.  The foreground boxcars are interchange traffic for Weyerhauser.  The tank cars seen end-on are spotted for a wood resins plant.  The background covered hoppers serve agricultural interests of the Mohawk Valley. 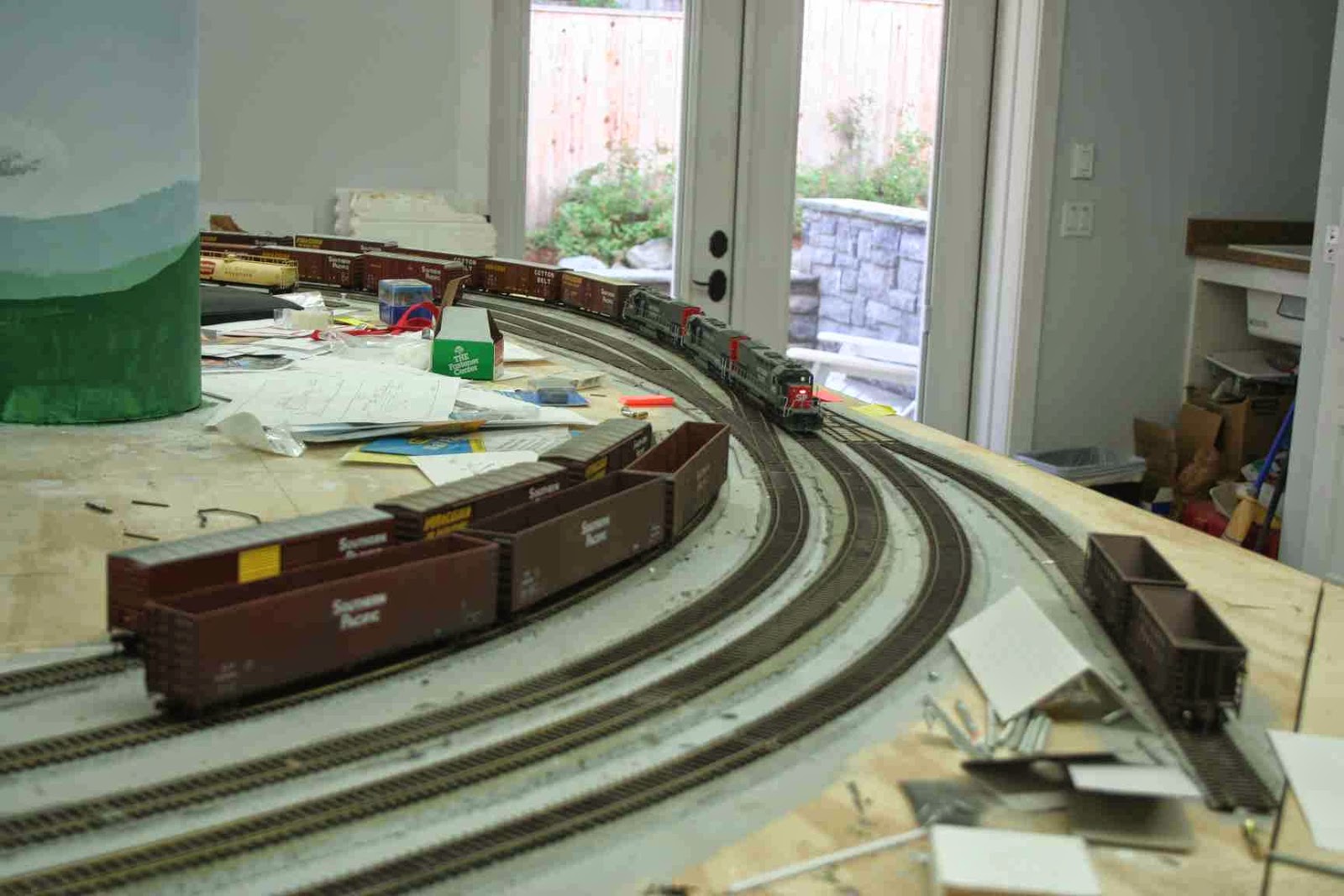 Rolling into RR-West Springfield, SP X8572 East passes a pair of tracks serving Rosboro Lumber on the geographic north of the mainline, while the hopper cars to the left (geo-south) are spotted at Springfield Rock. 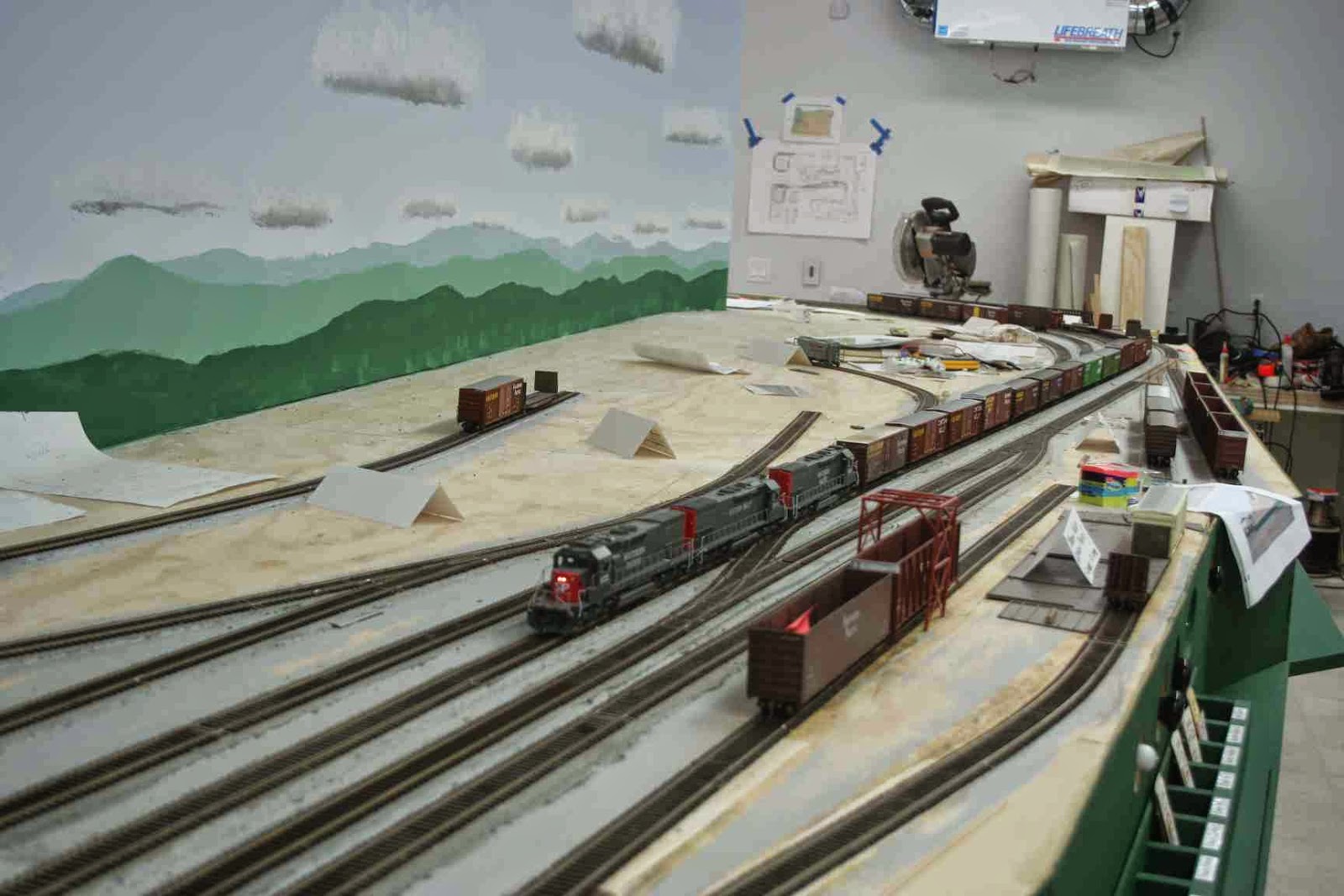 Proceeding down the mainline in Springfield, Clear Fir is on the left and four tracks serving the large Booth Kelly mill (later Georgia Pacific) are on the right. 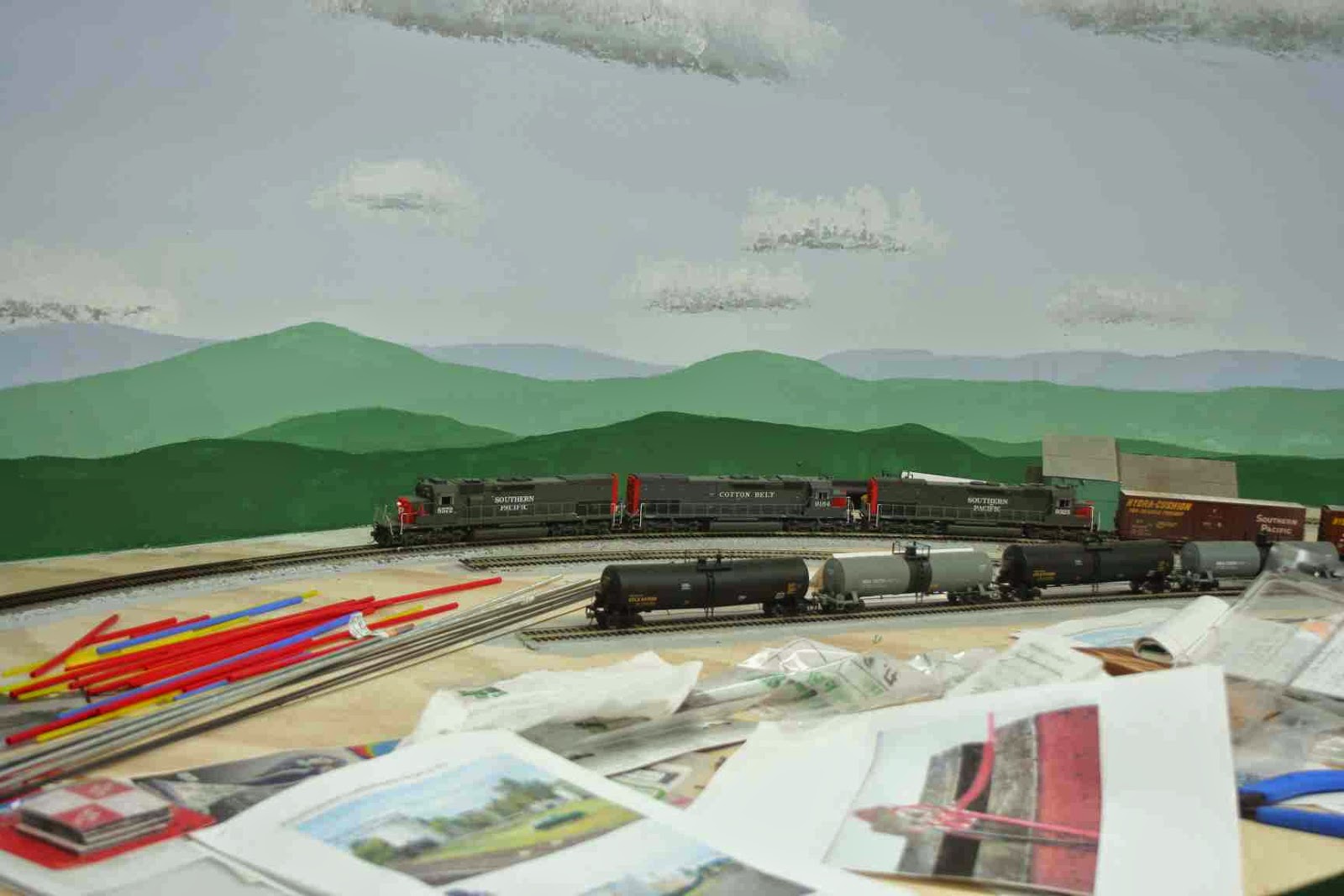 SP X8572 East is at the RR-East end of Springfield.  Borden Chemical is in the foreground.  A fictional oil dealer is in the background. 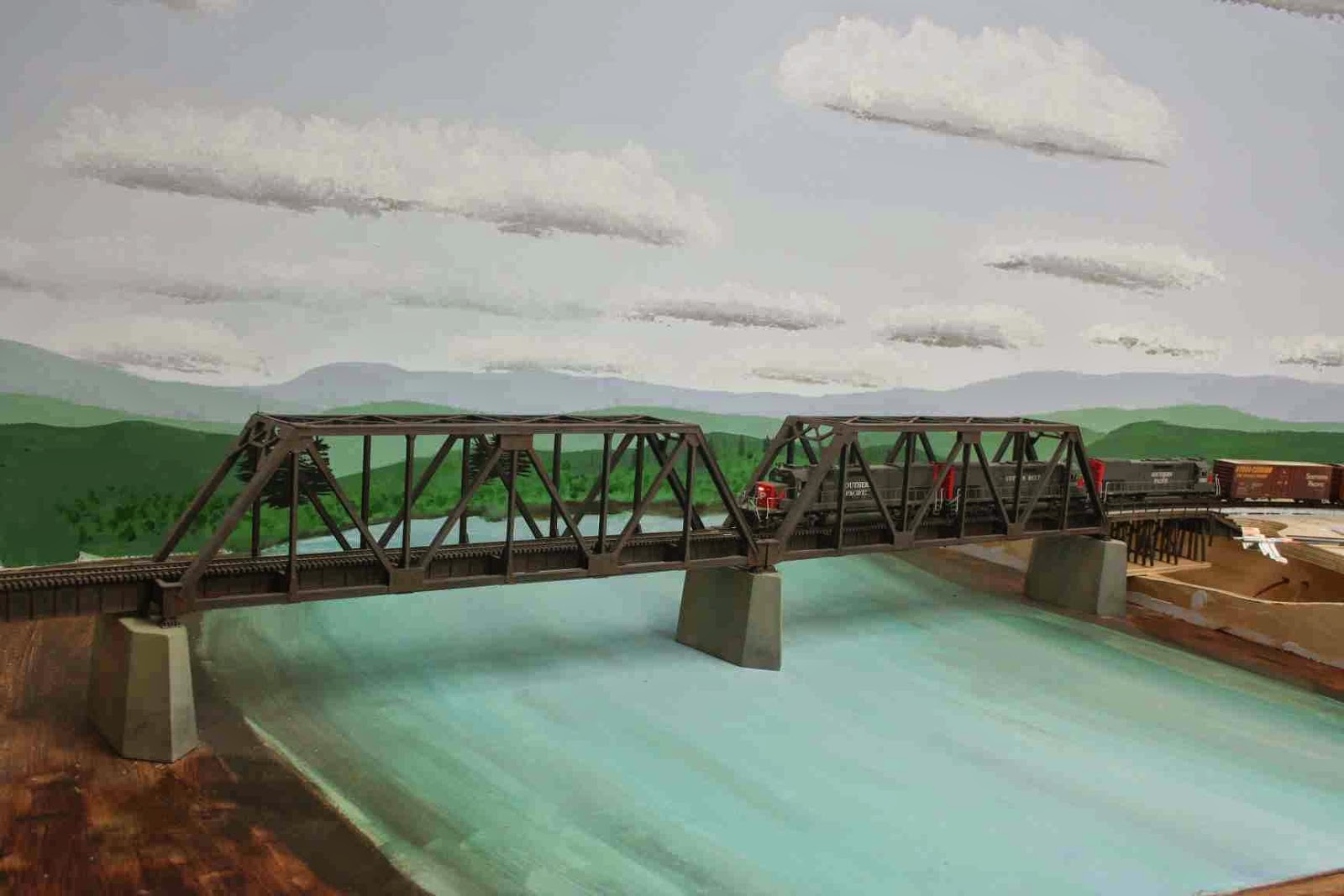 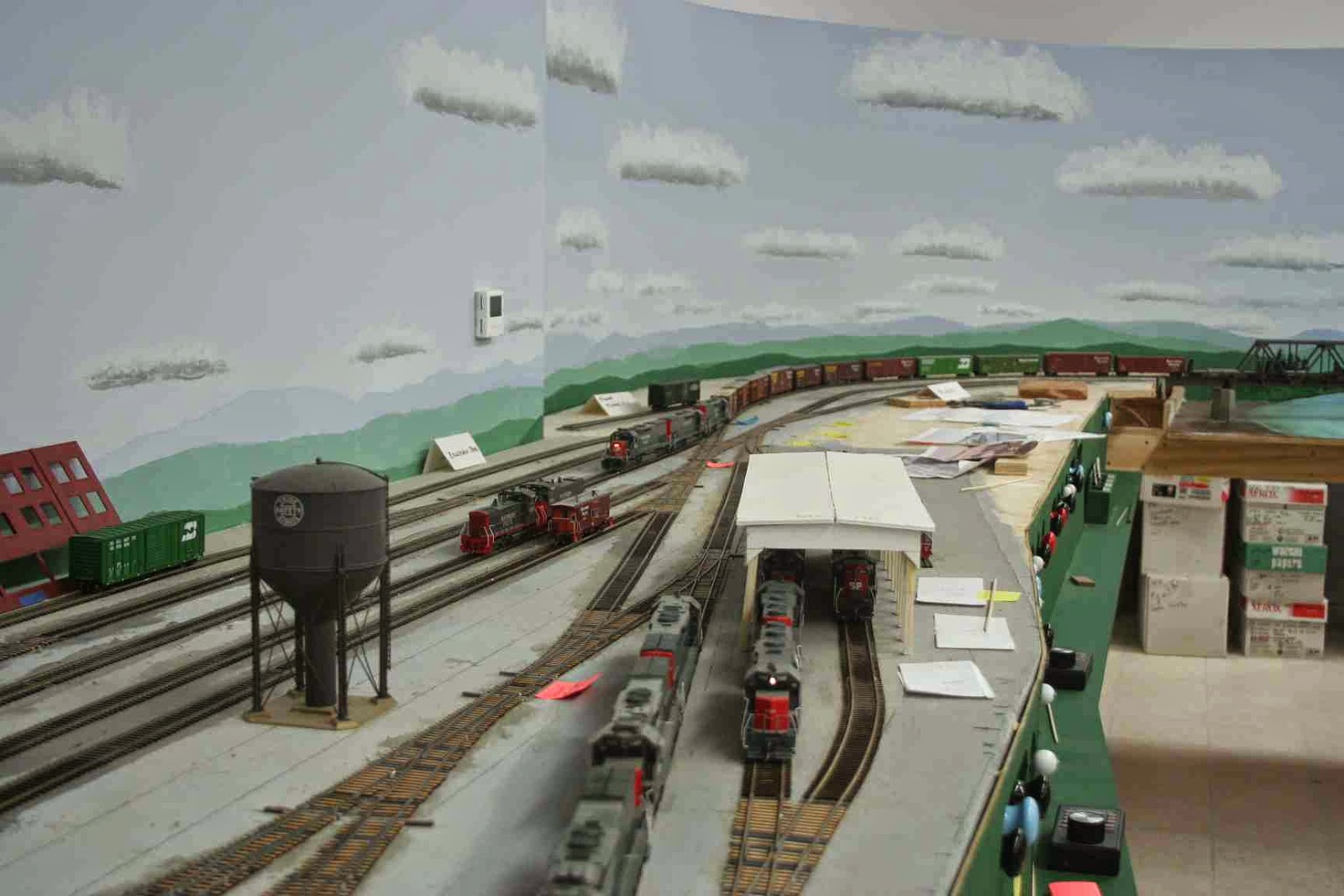 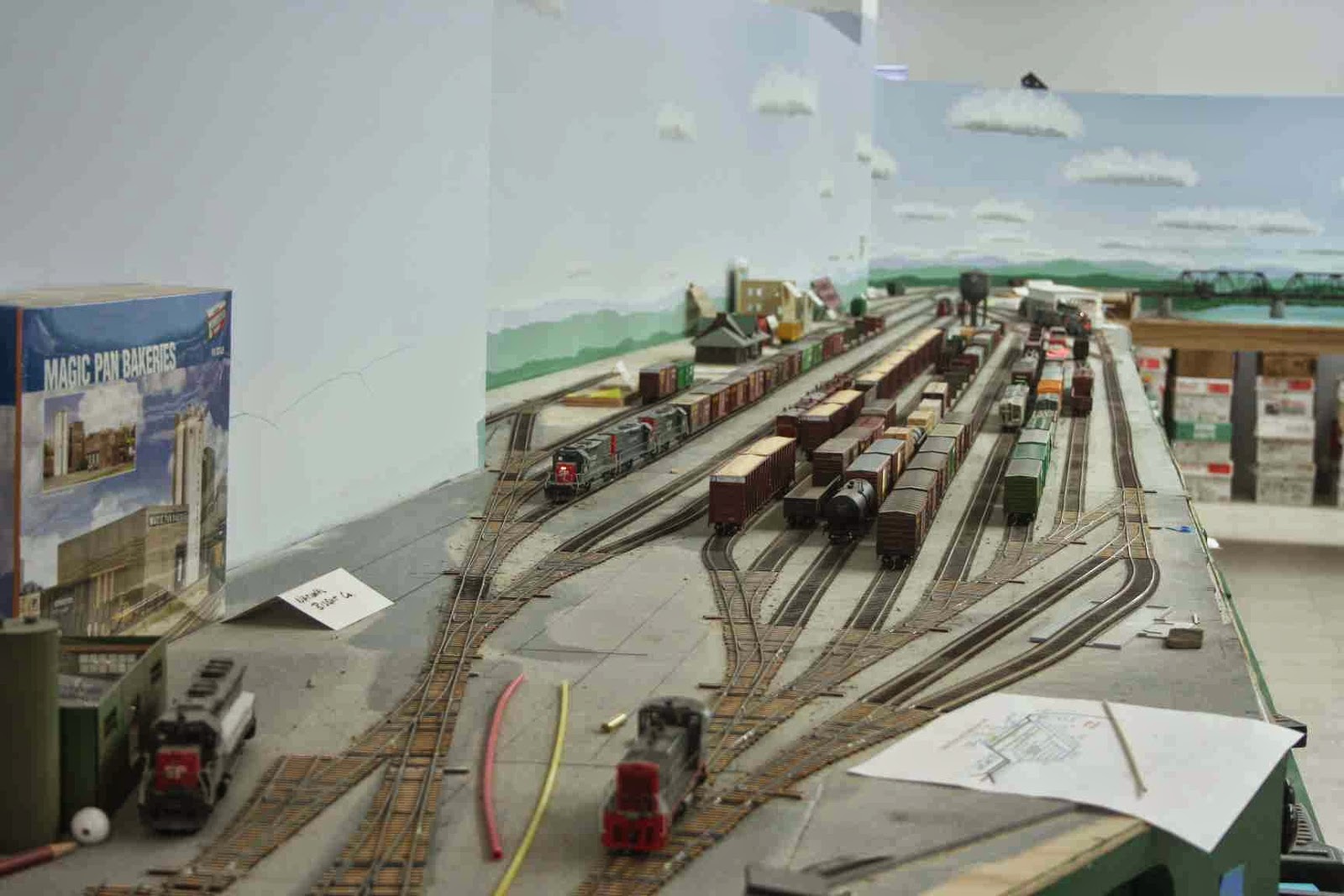 SP X8572 East completes its journey, holding on the main in front of the Eugene depot.  The RR-East end switcher waits in the foreground.

A foretaste of coming attractions is provided by the following views of Cascade Summit: 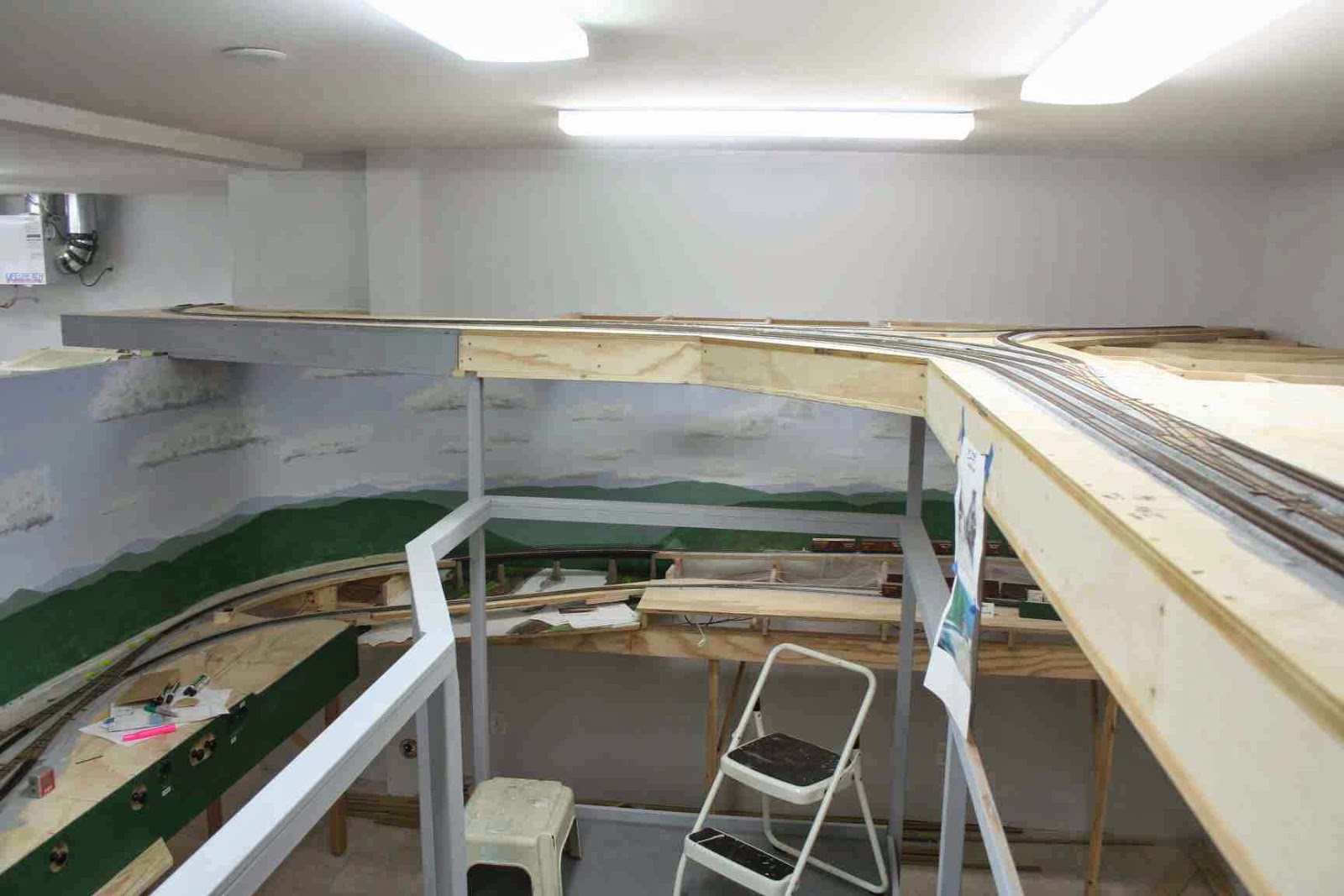 RR-West end of Cascade Summit, including the turning wye. 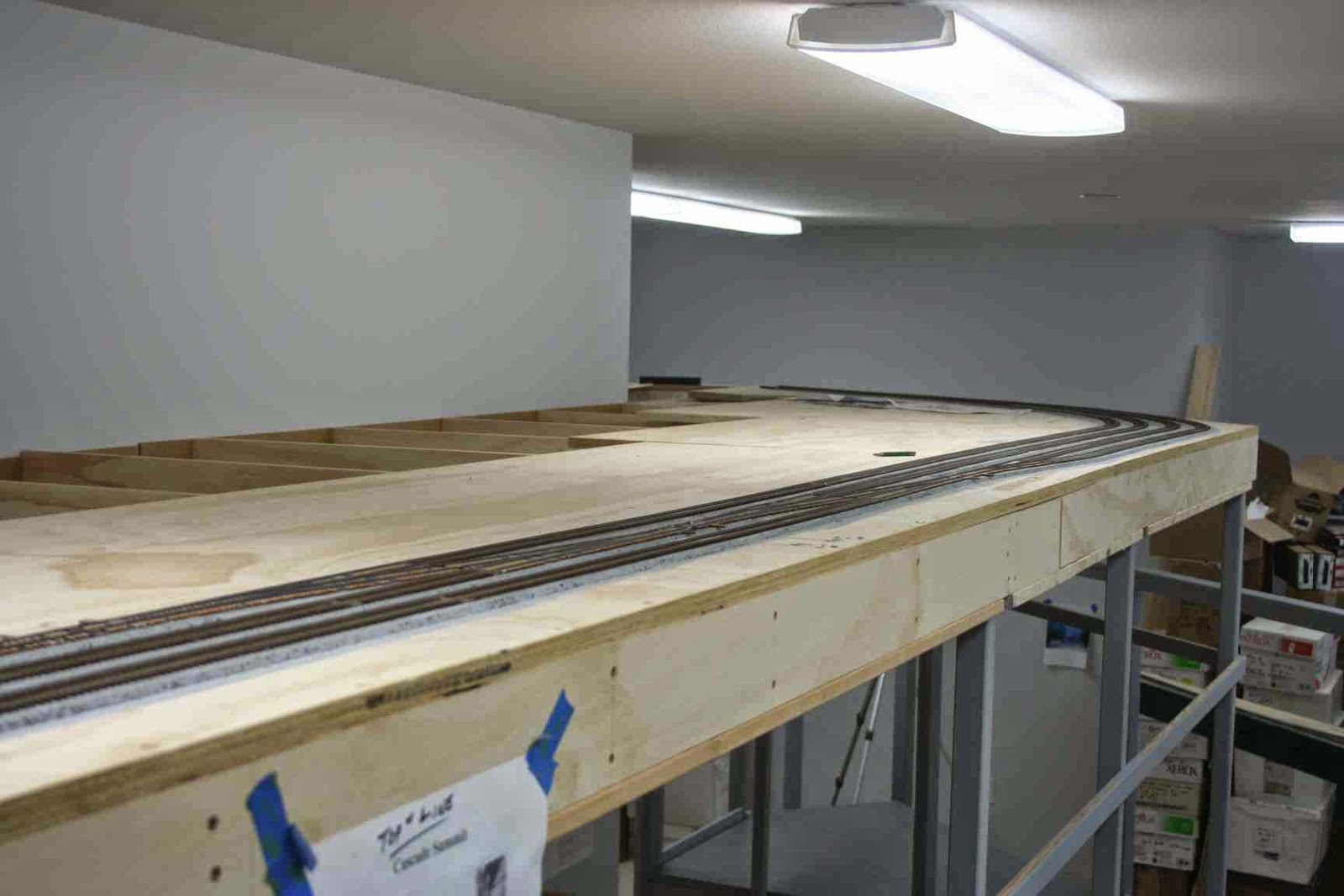 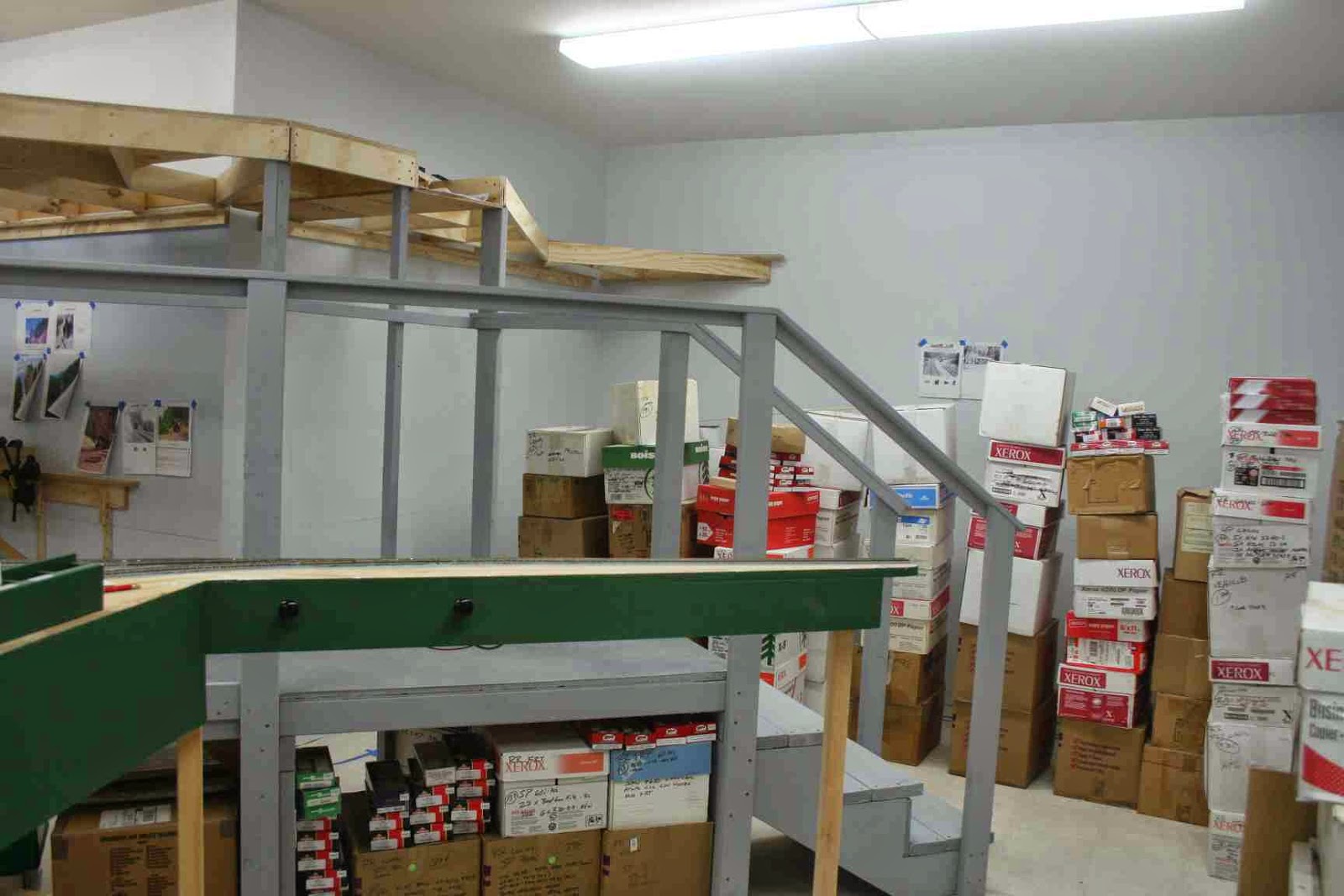 Benchwork is in place for the summit tunnel.  The railroad will start descending from this point down the wall to the right of the picture, loop back on Salt Creek trestle, reemerge on the lower level behind the storage and moving boxes where McCredie Springs will be built, and connect to the line up out of Oakridge just visible at the left of the photo.  The operator platform for Cascade Summit is in place.  The Oakridge wye tail track is on the green-painted section in the foreground.

The railroad clearly is under construction as evidenced by the many tools and bits and pieces scattered around the layout.   Also evident are a number of “fix-it” tags at spots identified during operations.  “Operations” is a key word, as I have now held three test operations sessions on the current railroad.  This helps me find spots needing work.  It also helps me develop the operating plan in advance of completing the railroad.  The vision and dream are becoming reality!
Posted by EspeeCascades at 12:10 PM No comments:

I held my third test operations session on my HO scale SP Cascade Line this weekend.  The operating crew nearly doubled to seven compared to the four used for the prior pair of sessions. http://espeecascades.blogspot.com/2014/03/first-flight-ops.html    http://espeecascades.blogspot.com/2014/06/spurred-on-by-operations.html  The crew expansion was based on experience from the previous session, wherein it became clear that the Eugene classification needed more staff to handle their duties.

The Eugene yard must make and break five local freight trains over the course of the session, plus either add cars or create complete new road freights.  To handle the load, we used two switch crews and a yardmaster.  The RR-West switcher was a “heavy” switcher composed of two switch engines, while the RR-East switcher could make due with a single locomotive.  This reflects the amount of switch lead currently available at each end of the classification yard.  As the railroad expands, the RR-East switch lead will grow in length. 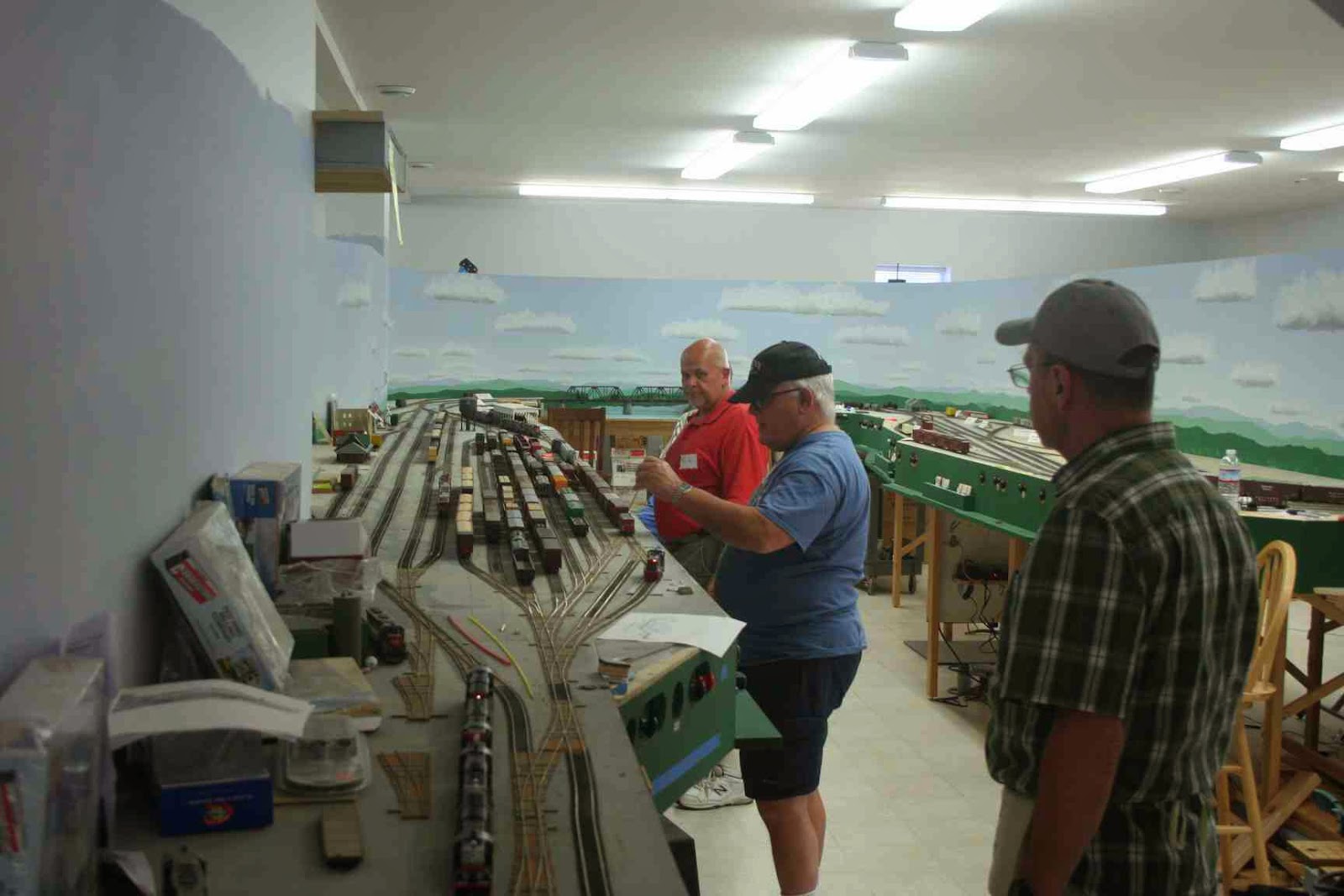 Yardmaster Rick A. and RR-East end switcher Dave H. look on as Dave B. matches car documents to cars in his train prior to departing Eugene.

In addition to having a yardmaster to orchestrate the moves of the two switchers, I provided a couple of organizational aids based on observation and discussion following the previous session.  First, I used several “Highlighter” colors to color code the destinations on the waybills.  This provided a quick visual reference useful while sorting car cards with waybills.  The second innovation was provision of car card slot separators to help organize and designate the car card slots for the yard tracks.  These were 2x5 inch  cards with a destination name and the color code highlight.  These destination aids helped the yardmaster to quickly sort through the car documents for cars on a track to decide how best to have them switched and how to organize the yard for that purpose. 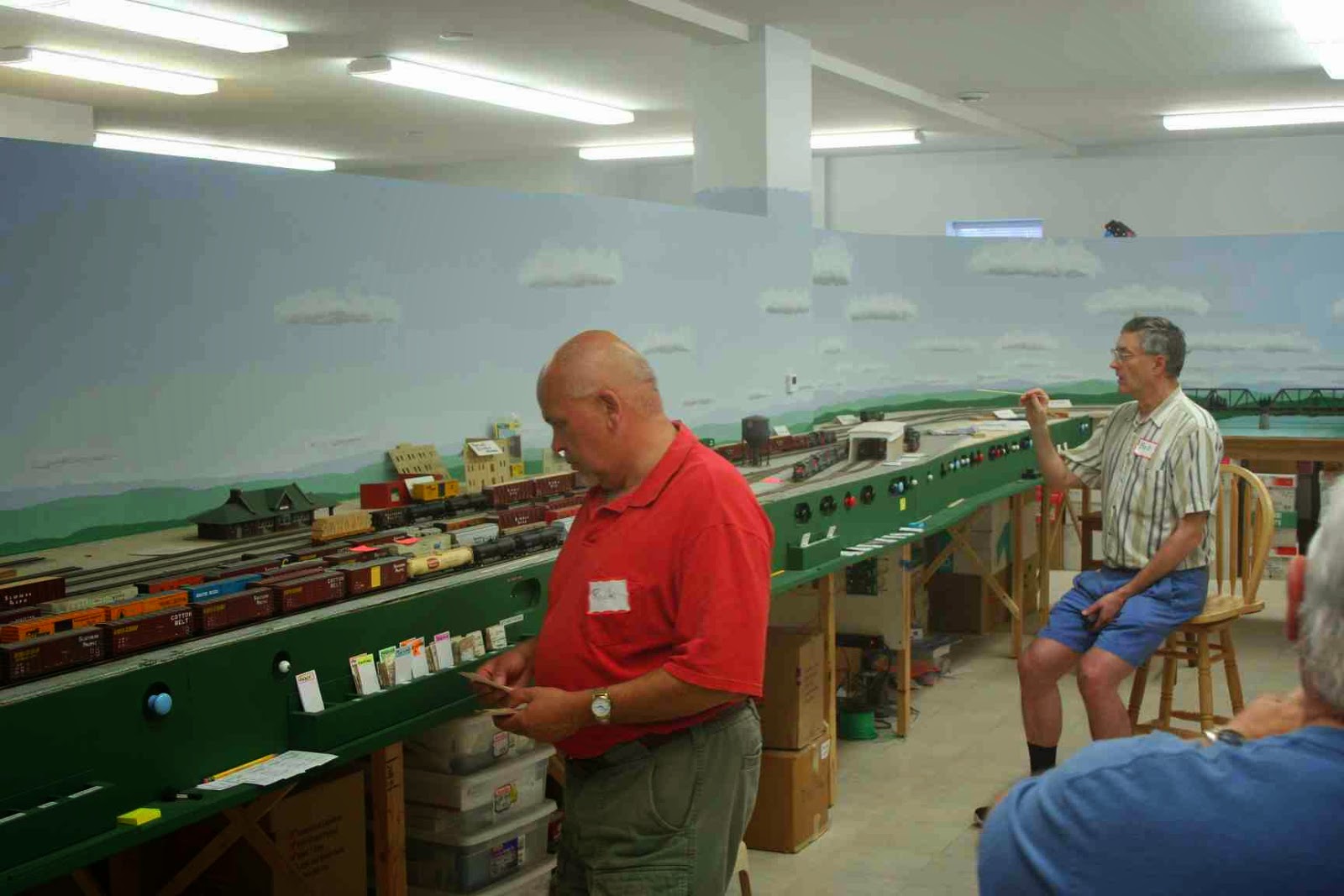 Yardmaster Rick A. organizes work in the Eugene classification yard aided by card slot destination cards and color-coding.  RR-West end switcher engineer Bob Y. takes a break and points out a yard feature to other crewmembers.

With the yard better organized, all five local switching jobs were run.  Two of these jobs began the session staged at their respective station assignments: Oakridge and the first Springfield job.  These trains start the session immediately.  Their next day counterparts are built in the classification yard during the session and depart for their stations at the end of the session.  A consequence of this is that at least two local freights can begin work immediately without awaiting effort in the yard—a common failing of many model railroad operations.  This also captures the idea of railroad work as a continuous process.

In addition to these first two locals, the Eugene “City Switcher” began the session by making “pulls” from the city industries.  Eventually, the City Switcher exchanged the block of cars pulled from the industries for a new block of cars made up by the yard crew that were to be spotted at the city industries.  This work organization permitted three of the five local freight-switching jobs to begin working at the start of the session. 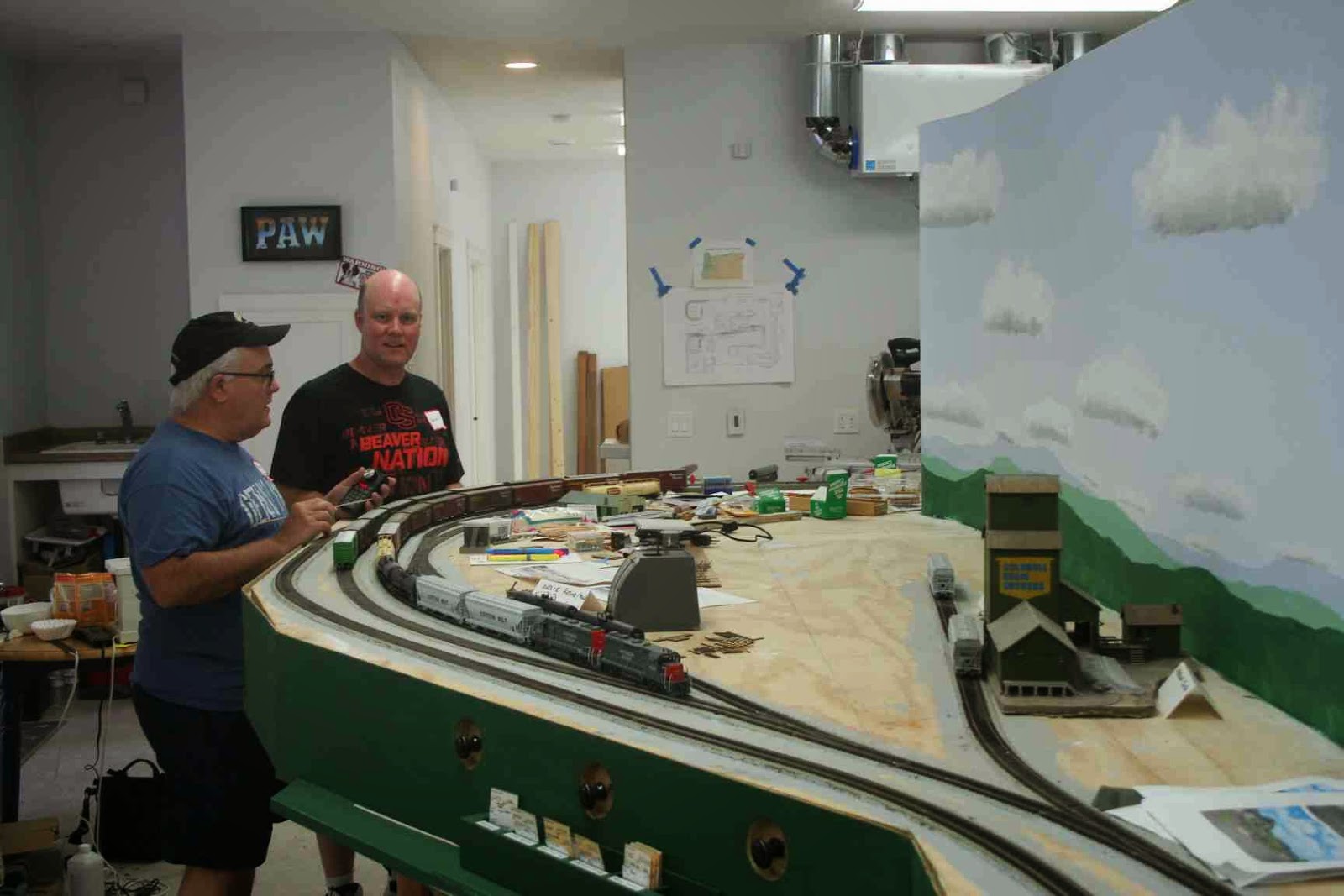 Dave B. and Brian P. work the first Marcola Turn.

In addition to the yard switchers and local freights, several mainline trains were run, though the current layout construction state means they must run between Eugene and Oakridge—not even half their eventual runs on the completed layout.

Two other crewmembers “escaped” to other commitments before I remembered to pull out the camera.  Thanks Tom D. and Ken R!

Important outcomes of the third test operating session are that the Eugene Yard work is getting sorted out as to how to organize and perform it, all local freights were run, and a rough sense of timing for this work is emerging.  Those are important accomplishments, especially so with only three operating sessions performed so far.  We are all looking forward to completion of the railroad to see how the mainline traffic fits in with the local, on-layout, switching.
Posted by EspeeCascades at 12:56 PM No comments: