Building upon the success and experience in laying Oakridge, I tackled the first major piece of the Eugene complex.  I had to add another eight foot panel to the benchwork to accommodate the RR-East ends of the depot tracks and the classification yard.  This area becomes a prime choke point where the depot and class yards close up but then the tracks enter (eventually) the Eugene arrival/departure yard and engine facility.

Benchwork went quickly.  I moved on to laying out the track lines (lots of parallel pencil lines for twelve tracks with various spacings) and then laying out switches to join up all those tracks.  Learning from my experience at Oakridge, I chose to permanently lay the RR-West yard throat and ladders, followed by the mainline through the Eugene depot area, and then the RR-East yard ladders and throat.  Finally, I joined up the rest of the body tracks, fitting and permanently fixing two at a time.  By fixing the switch ladders early in the process, I had hard ends to work against while fitting the body tracks.  This went very smoothly. 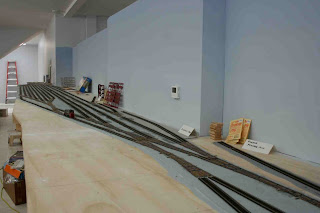 RR-West end of Eugene.  The mainline and “WP” Siding are on the left, followed by a pair of “City Yard” tracks and then the seven plus run-around classification yard tracks on the left.

An immediate challenge was sorting through the industries to be served in the depot area.  I pulled out structure kits purchased long ago for this area.  Several will make it onto the layout, albeit modified for narrow depth, added length or other purposes.  I’ll try to avoid leaving anything totally “stock.”  A Walthers “Front Street Warehouse”  was tried for a spot near the depot, but will not make the cut.  Its size was ok, but the architectural style was too old for Eugene.  My Eugene is largely a fiction (A common belief of OSU Beavers like me!  <Grin>), but I still need to capture the “look and feel” of a major Willamette Valley city.  Most structures need to date from the 20th Century, but that warehouse was distinctly earlier.  A couple of the spurs will be left loose (not permanently applied to the roadbed) until I design and build the structures to be served by those spurs. 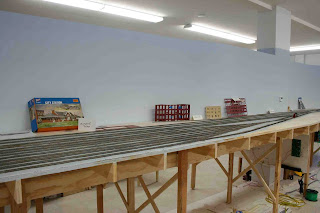 Eugene Depot area and city industry spurs.  The “Front Street Warehouse” in the middle of the photo, to the right of the depot platform, will not be used.  It is too tall and too early an architectural style. 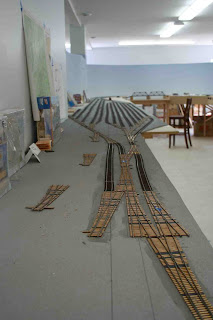 RR-East Eugene depot and classification yard.  The throat area in the immediate foreground is atop the new benchwork panel.  Loose switches on the left will be served by an industry siding. 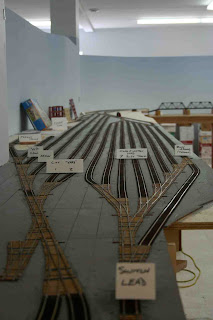 The photo above shows labels for the tracks in the Eugene Depot and Classification Yard.  Left to right, are the spurs for the SP freight house, the “WP” siding (closest to the depot), the mainline, and a pair of tracks for the Eugene “City” yard.  This latter pair has a crossover midway to help the “City Switcher” do its work.  These tracks may also serve as freight sidings awaiting entry into the Arrival/Departure Yard.  The switch lead serves seven body tracks in the classification yard and an eighth  track on the right serves as a run-around (run-through) for access to the RR-West end.

Twelve tracks deep in the depot area make for a very long reach for uncoupling operations.  Fortunately, most of that action needs to be done by the “City Switcher” (one crew job) with a slight additional bit of work for the Klamath mail train in eras when it ran.  I suspect I’ll need a dedicated footstool for the City Switcher.  Meanwhile, I installed hatches for a dozen uncoupling magnets, most of which are located under the deeper tracks.

I installed 44 switches in this part of the Eugene complex.  That puts me past the halfway point on total switch installations for the complete layout.  The next several weeks will involve installing switch machines and wiring all of this.  I also need to complete the bridges over the Willamette River to connect to Springfield.  With that, the “Valley Core” of the railroad will be complete and I can start operations testing.

The end of July marks one year of construction.  I am happy to report I met my predicted project timeline—about a year to reach this stage.  This bodes well for a complete railroad ready for the NMRA National Convention in Portland in 2015.  This blog achieved another milestone this past week with the 10,000th page view.  Wow!

Posted by EspeeCascades at 9:05 PM No comments:

As track laying forges ahead (currently in Eugene), I still have tasks remaining with earlier work.  I recently completed installing the manual switch linkages for Springfield—28 switches.  I use Blue Point ™ switch machines to throw the switches and provide sets of contacts for frog polarity and an auxiliary set.  The auxiliary set will be used with the signal system for a number of these switches.  The Blue Point switch machine essentially is a double pole-double throw switch with mechanical hardware providing for switch throws.

Blue Point sells bulk packs of the switch machine—a boon to a large operation such as mine.  They also sell connection hardware kits that include a mounting bracket, a connecting clevis for the machine and a knob, all intended to be used with a flexible tube system similar to a choke cable.

Instead of the choke cable system, I discovered I could make a more direct linkage.  As illustrated in the photo, my system uses a small screw eye, threaded rod, a brass tube bushing and a standard cabinet knob.  Most cabinet knobs use a #8-32 thread, so that sets the threaded rod size.  The bushing is a piece of ¼” brass tube, which keeps the threaded rod from hanging up on the fascia and backing wood.  The screw eye is the small (1/2”) piece from Ace Hardware.  I found the #8-32 rod threaded into this eye easily, whereas a similar sized screw eye from True Value Hardware was too tight.  If I had an #8-32 tap, I probably could make the True Value part work.  I add a nut on the threaded rod to screw up against the Blue Point throw arm, which provides a bit of compression force relief for the screw eye. 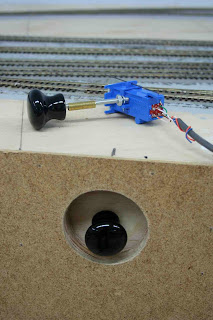 I chose to mount my manual throws such that the knobs have some relief into the fascia.  This resulted in the fascia mounting being about an inch lower than the mounting on the Blue Point machine.  I had to fashion offset height throw mountings for a pair of machines very close to the aisle in Springfield.  I have a similar issue for the wye switch at Oakridge.  For Oakridge, I’ll do without the fascia relief hole and mount the throw rod and knob at the depth below track of the Blue Point throw bar.

I have a “Plan B” for the throw bar mount to replace the screw eye, should I start suffering failures.  My back-up plan involves homemade clevises for the threaded rod to throw bar connection.  Until that time, I am happy with this simple, direct, linkage.
Posted by EspeeCascades at 9:06 PM No comments: