One task on my “active” list for most of the past year was improving the documents used to direct individual car movements on my layout.  I use a “home-brewed” car card and waybill system based on similar documents printed by Old Line Graphics and Micro-Mark.  All of these derive from the fundamental system described in a landmark article in Model Railroader magazine by Doug Smith.

The basic car card and waybill system features a car card with a pocket that travels with each car on the railroad.  A separate “waybill” is inserted into the pocket to direct movement of that car to the next destination.  Long ago, I developed computer-printed masters for both the car card and waybill, very similar to the aforementioned commercial products. Though I have long-since lost the original text file, my printed masters still serve as reproduction masters. 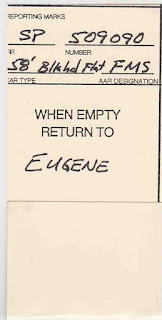 While my car card master continues to serve satisfactorily, even with the hand-written data entries, the same could not be  stated for the waybill.  I was reminded of the inadequacies of my waybill format for hand-written data entry as I pressed it into service for initial operations on my SP Cascade Line.  In the rush to get ready for the NMRA National Convention in August, 2015, I simply could not spend the time needed to develop or acquire a suitable computer substitute.  Note that I use Apple Macintosh computers for which little model railroad software has been developed.

One positive aspect of my forced railroad down-time this winter and spring has been time to deal with this operating document issue.  I located a car card and waybill routine that used Microsoft Excel, a program on my desktop.  The particular program was developed and made available by the NMRA Australasian Region with a link provided by the Operations Special Interest Group.  The programmer(s) who developed the Excel spreadsheets did a great job, including getting the correct format for a two-sided four-cycle waybill.  My railroad operations really need only two of the four cycles resulting in my needing to print only the front side of the waybill.  I added color code bands for the destinations to assist the classification yard in rapidly switching cars. 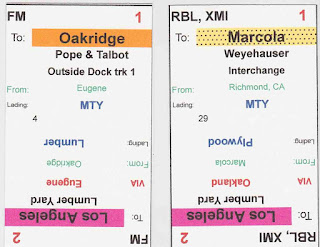 A final car document I am now adding to my operations is a “Spot Card.”  This is a control feature for making up local freights developed by Lee Nicholas of “Utah Colorado and Western” fame and adopted by my friends in the nearby Willamette Model Railroad Club.  The idea is that the originating yard for a local freight has a file of “Spot Cards” for industry spurs served by that local.  The yardmaster (or clerk) marries up the appropriate “Spot Card” with a car card and waybill for a car being placed into the local freight consist.  If a spot card is available, that means there is space at that industry spur for the car.  I adapted the “Spot Card” idea from my WMRRC friends to my own use, adding the same color code used for the destination station. 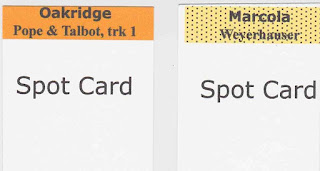 The final document for a car to be spotted at an on-line industry consists of a car card with a waybill and spot card in the pocket. 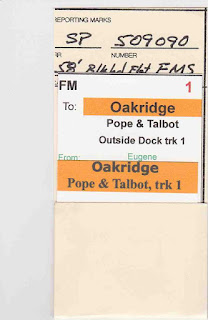 Car card set for an empty bulkhead flat to be spotted for loading at the Pope and Talbot lumber mill at Oakridge. 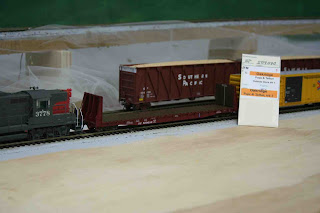 SP bulkhead flat being spotted at Pope and Talbot.

While I was working with Excel and printing operating documents, I used the same color code for file divider strips for use by my Eugene Yardmaster.  The YM uses the dividers to separate blocks of cars in the classification yard. 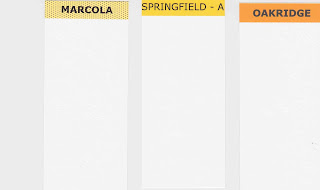 Car card slot dividers.  “Springfield – A” is the first Springfield switch job that switches the backdrop side of the mainline at Springfield.

The big test for all of these documents will occur in another couple of weeks as my railroad returns to scheduled operations.
Posted by EspeeCascades at 11:27 AM No comments:

During the house repairs, I covered the affected areas of the railroad with hardboard to protect the track.  The railroad had to serve as a work platform in three places, each of which had a number of switches installed.  After I painted the repaired ceiling over the railroad, I removed those hardboard covers.  Inspection of the railroad was the next task.

I was pleasantly surprised to find relatively little damage to the railroad.  Only one switch repair could be tied directly to the house repair activity.  The throwbar for the snow plow track off the Oakridge wye was broken.  This was a Micro Engineering turnout.  I have found their throwbars a bit frail and have replaced about a half dozen on the railroad so far.  Although I had to fiddle with the switch machine installation while replacing the throwbar with a pc-board tie, the job was directly accomplished.

One other switch repair was somewhat related to the house work.  The RR-West siding switch at West Springfield (outer edge of the turnback loop) looked like it could use some tweaking.  I got a bit too vigorous with my small file, catching the point, splitting it through the rail web and crumpling the head portion of the point.  The picture below shows my attempt at reforming the point.  I decided it would be better to replace the point rail.  This turned out to be an easy job—much better than trying to make do with the damaged rail. 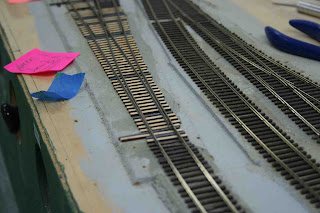 Damaged point rail at RR-West Springfield.  The damaged point is on the right, not quite straight. 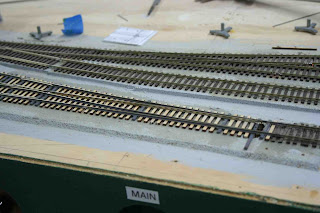 A consequence of all of the drying action in the house was change in the moisture content of the railroad benchwork.  This showed up as warped track—like a sun kink on the full-sized railroads.  I had two of these warped rails or track.  A single rail needed to have a gap cut for expansion and the rail spiked down for about a foot in length in the midst of Oakridge yard.  A second spot, on the mainline out of Springfield, had the track pop up off the adhesive with both rails warped.  This one was a very simple fix of shortening the rails at the nearby rail joint and reattaching the track to the roadbed. 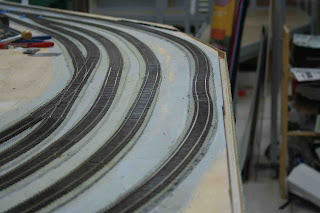 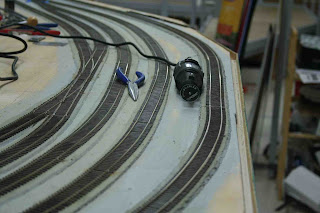 Reattached track after trimming the length of the both rails.

A final track task has been a long-deferred systematic inspection and tweaking of my Fast Tracks switches.  Most of my original construction Fast Tracks switches were built without a notch in the stock rail railhead where the points meet the stock rail.  At least for me, this resulted in tight track gauge at the points and through the first couple of inches of the points.  Although I or one of my trusted helpers have gotten to many of these switches, now was a perfect time to systematically inspect and tune.  All of the rolling stock that has been on the railroad is in the staging loops in the “back” room.  Without equipment in the way, the inspection and tweaking proceeded very efficiently.

It has been a long  down time for my railroad.  I am about to clean the track (another task made easier with no equipment nearby), vacuum the railroad (again) and finally turn the power back on.  That light at the end of the tunnel is growing brighter!
Posted by EspeeCascades at 4:02 PM 3 comments: