I struggled over the past couple of months to add to my model of the Neste Resins (Chembond) wood chemicals plant.  Previous posts are at:

Even my usual discipline, including list making and a semi-regular blog posting schedule could not lift me out of a funk.  I clearly needed a break and likely a change of focus.  More on that at the bottom of this post, but for now I at last can report adding a couple more elements to this facility.

First up was a long warehouse or processing building near the covered loading building.  I selected a Pikestuff Prefab warehouse, 541-0004, for this structure.  With only a few doors and windows required, I made quick work of this building. 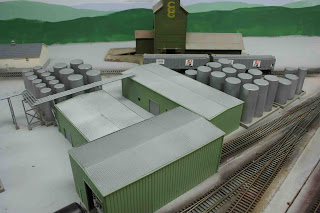 The second addition was loading racks for tanks cars.  I used the same Walthers kit for Borden Chemical at the other end of the Springfield complex.  The Walthers kit is for Four Modern Loading Racks, 933-4037.  A word of caution--this kit contains some small parts that likely will go flying at an inopportune moment, never to be seen again.  Fortunately, I had sprues for a spare rack so I could replace the missing parts. 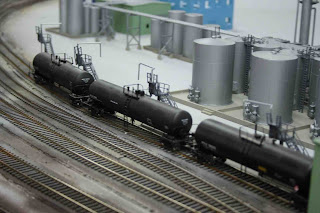 The other structure I wished to add to my Neste Resins facility was one of two office buildings along the public perimeter of the facility.  The desired structure needed to be two stories high and roughly square.  I chose another Pikestuff building, the Modern 2 Story Office Building, 541-5002 for my model.  This retained the "family" appearance of the same steel siding and roofing used throughout the facility.  This structure proved my undoing.

Every once in a while, a project takes a nasty turn and stalls all progress.  Such was the case with this structure.  I hit a proverbial wall--a simulated steel soft plastic wall.  I needed to cut nineteen windows and three doors into the walls.  The soft plastic used by Pikestuff tends to fold back in behind the knife blade when making a cut.  Harder plastic is easier to cut than this material.  Over the past two months I would sit down to cut window openings, making three or four passes each direction in each cut.  After a frustrating and tiring session, I would look at my efforts and not detect any progress.  After a while, I just stopped trying.  Instead of working on another project, I just let it all sit.

I have seen this phenomena off and on in the past.  I know that the cure is some new project to get me excited again.  That solution failed me for the past two months.  Perhaps the intense work on structures over the past six months led to project fatigue.  The lack of direct interaction with model railroad peers and hosting operating sessions certainly contributed.  Whatever, I just kept beating myself up by trying to cut those window openings.

Facing a month with no blog posts, I finally dug in and completed the required cuts and shaping of the window openings early this week.  I quickly moved on to assemble the walls.  Each wall consists of two pieces and those needed to be assembled into the basic box. When I looked at the resulting wall assembly the next morning, I immediately detected a fatal flaw.  The end walls were a different height than the side walls!  With the walls firmly joined, there was no hope for salvaging the project.

The mismatched wall height issue was a new experience for me using Pikestuff materials.  All previous kits joined at the corners well.  A look at the inside walls reveals all wall sections have a score line at the same height above the base--about four scale feet up.  Clearly, these walls are meant to be part of the same system.  The tops do not match.  I laid out all of my window openings from the bottom of the walls, so even if I could have separated the corner joints, I would not have been able to salvage more than half of the walls--take your pick. 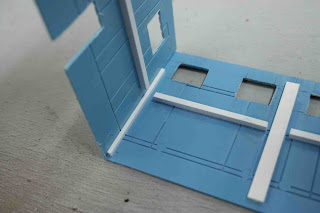 Interior of my Pikestuff 2 Story Office Building.  Note the scribe line about four scale feet up from the bottom on both end and side walls.  Also note the height mismatch at the top of the corner.

I had other issues with my construction, so it is best to walk away from this construction attempt.  I may take a cue from the prototype to totally scratch-build the structure walls and roofs with different siding, roofing and roof pitch.  The other office complex to be built uses similar siding--what appears to be vertical grooved plywood panels.  I will report on what I build at some later date.  For now, I need to let this project go dormant and move on to something that returns excitement to my hobby activity. 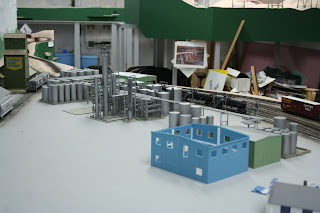