CONTROL FOR THE SWITCHES

The major remaining task required to begin test operations on my SP Cascade Line was providing control to the power switch machines.  Switch machine installation provided a mechanical throw rod and frog wiring.  With this, I could reach under the layout to manually move the Tortoise ™ throw to the desired position.  While this was sufficient for limited testing by me, it would be unacceptable for visiting operators.  Further, installation of the fascia made it much more difficult to reach under the layout.  The fascia was needed for switch linkage support for the manual throw switches, which use Blue Point ™ switch machines.

The eventual plan for the SP Cascade Line provides for Centralized Traffic Control, wherein significant switches are remotely controlled by the Dispatcher.  Though I have been gathering the needed computer interface and control circuit boards for the CTC implementation, I am not quite ready to launch into that major effort.   This still left me with a need to control the power switch machines.

For the interim, I opted to wire the Tortoise ™ machines with conventional toggle switch control via connection to a 12 volt power supply distributed around the layout.  Over two dozen switch machines have been connected using DPDT toggle switches for control.

Of course, there were some challenges along the way.  One major challenge occurred with a machine at the end of the Springfield peninsula.  This spot is more than a little confined and has a concentration of both Tortoise ™ and Blue Point ™ switch machines. 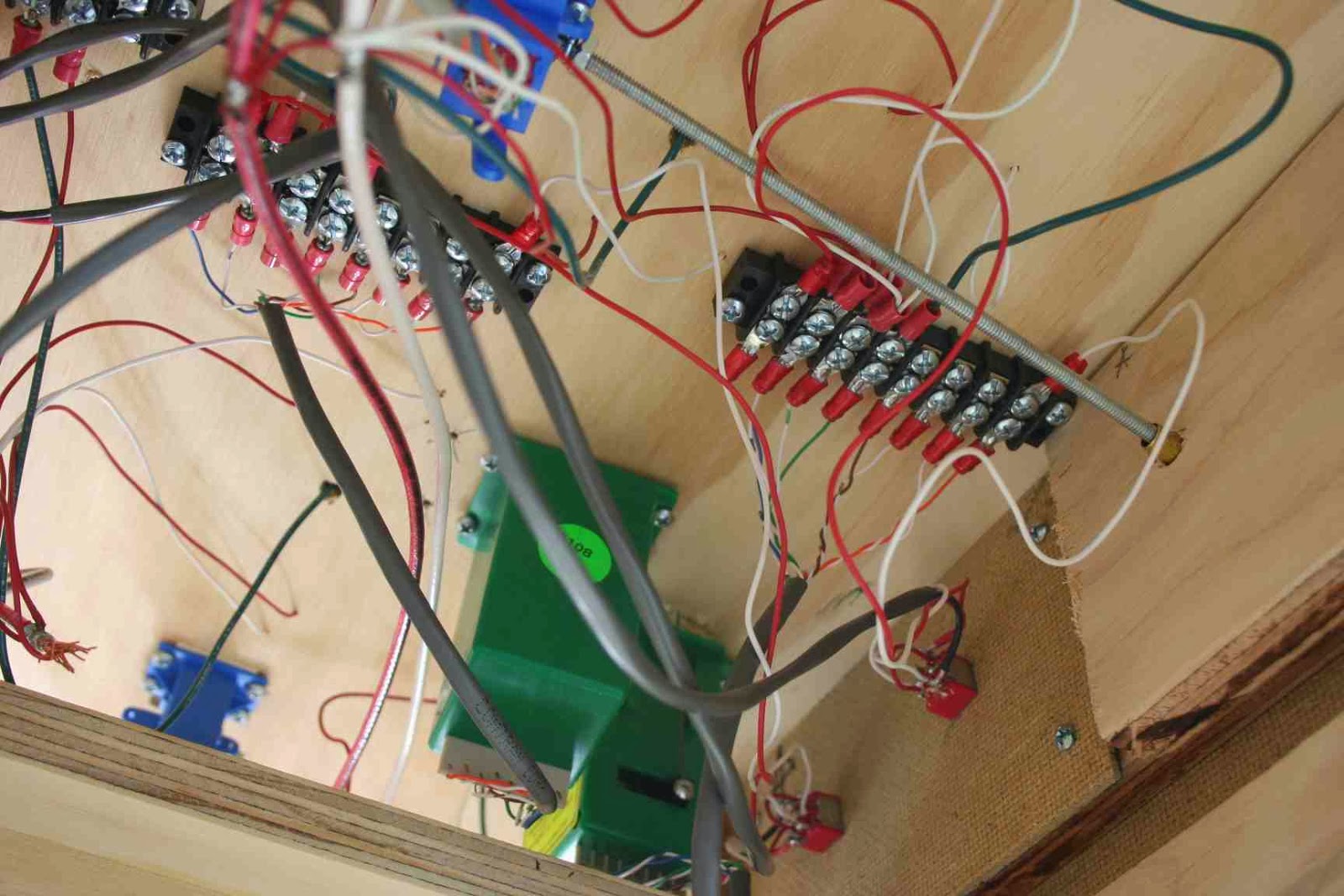 True to “Murphy’s Law,” one of the machines did not work when powered up and needed to be replaced.  This probably was a good failure, because it prompted me to change the switch machine mounting.  I originally used an offset throw, as provided by the Tortoise machine.  This results in a diagonally moving throw rod that also produced up and down movement in the throw bar on the turnout.  I found the rod had popped out of the throw bar as I trouble shot the switch machine.  I replaced the original mounting, which used a hole in the middle of the throw bar, between the rails, with a hole outside the rails.  This allowed the standard center (in the machine fulcrum) throw rod mounting which results in minimal vertical movement.  The close proximity of two Tortoise ™ machines, seen in the photo, is what led to the original mount.  My alternative mounting accounts for both machines, but is mechanically much better.

I took the opportunity to do some fascia painting as I dealt with the toggle switch mounts.  As with the magnet hatch throws reported recently (http://espeecascades.blogspot.com/2014/01/its-magnetic.html), I had clear access to the backing panels before hardware was installed.  This led to a more general fascia painting exercise. 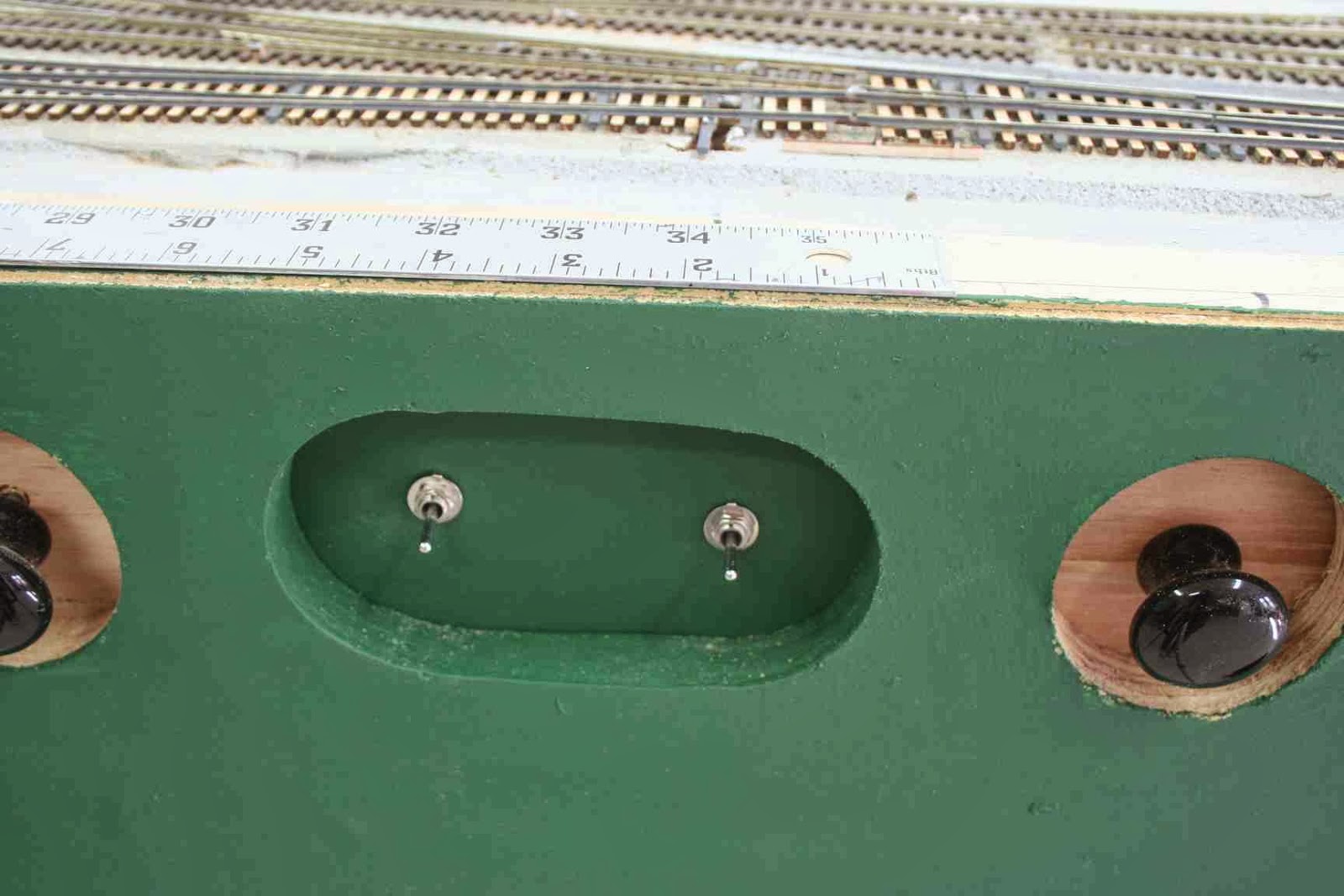 Power switch machine toggle switch controls mounted in fascia inset.  Manual switch linkage knobs on either side have not had their backing plates painted yet.

Painting the fascia had a dramatic effect on the impression of the railroad, neatly framing it between fascia and backdrop.  I recognize the fascia will get messed up as I work on scenery, ballasting the track, and many other tasks, but paint is a relatively cheap way to provide a more finished look—important for visitors. 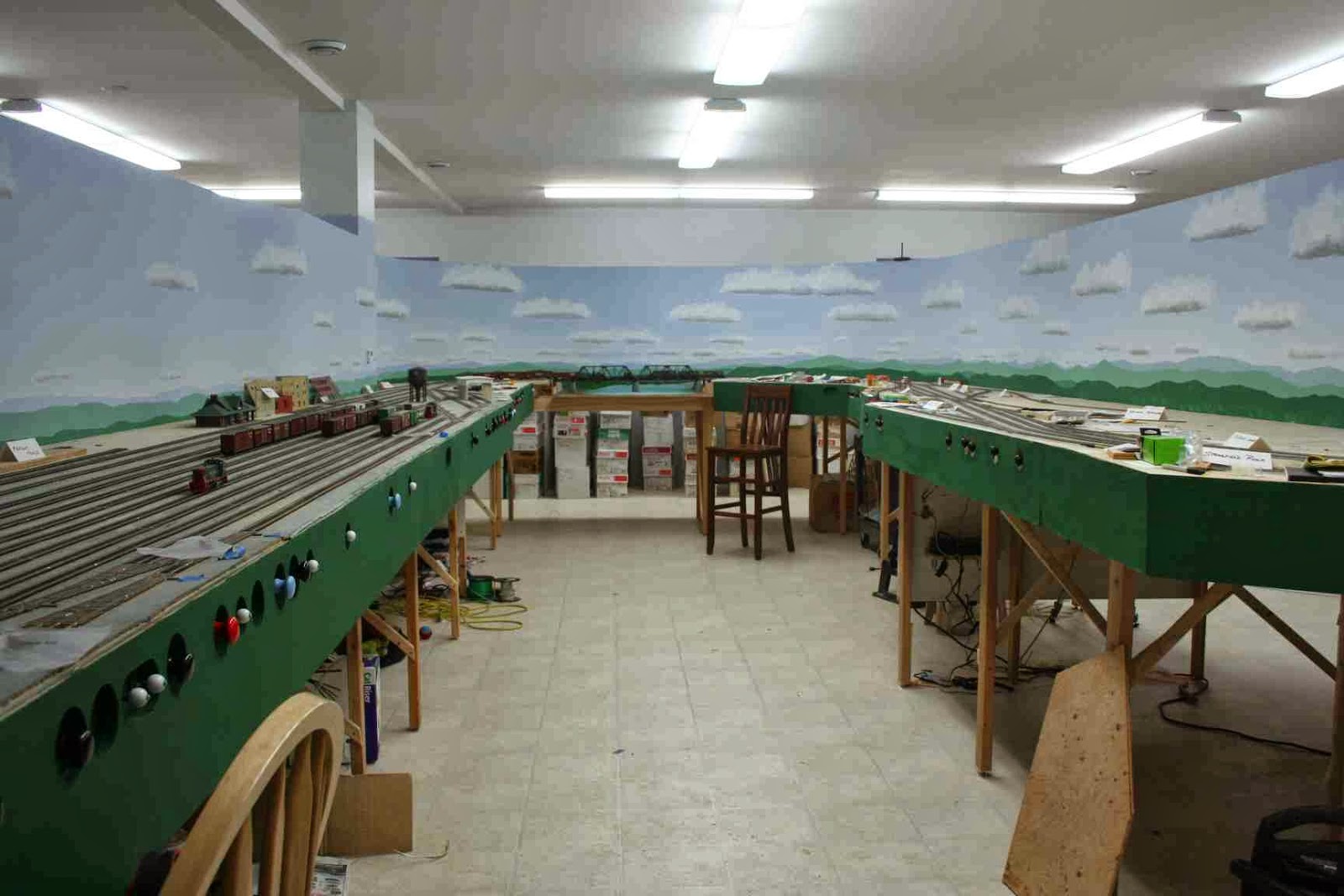 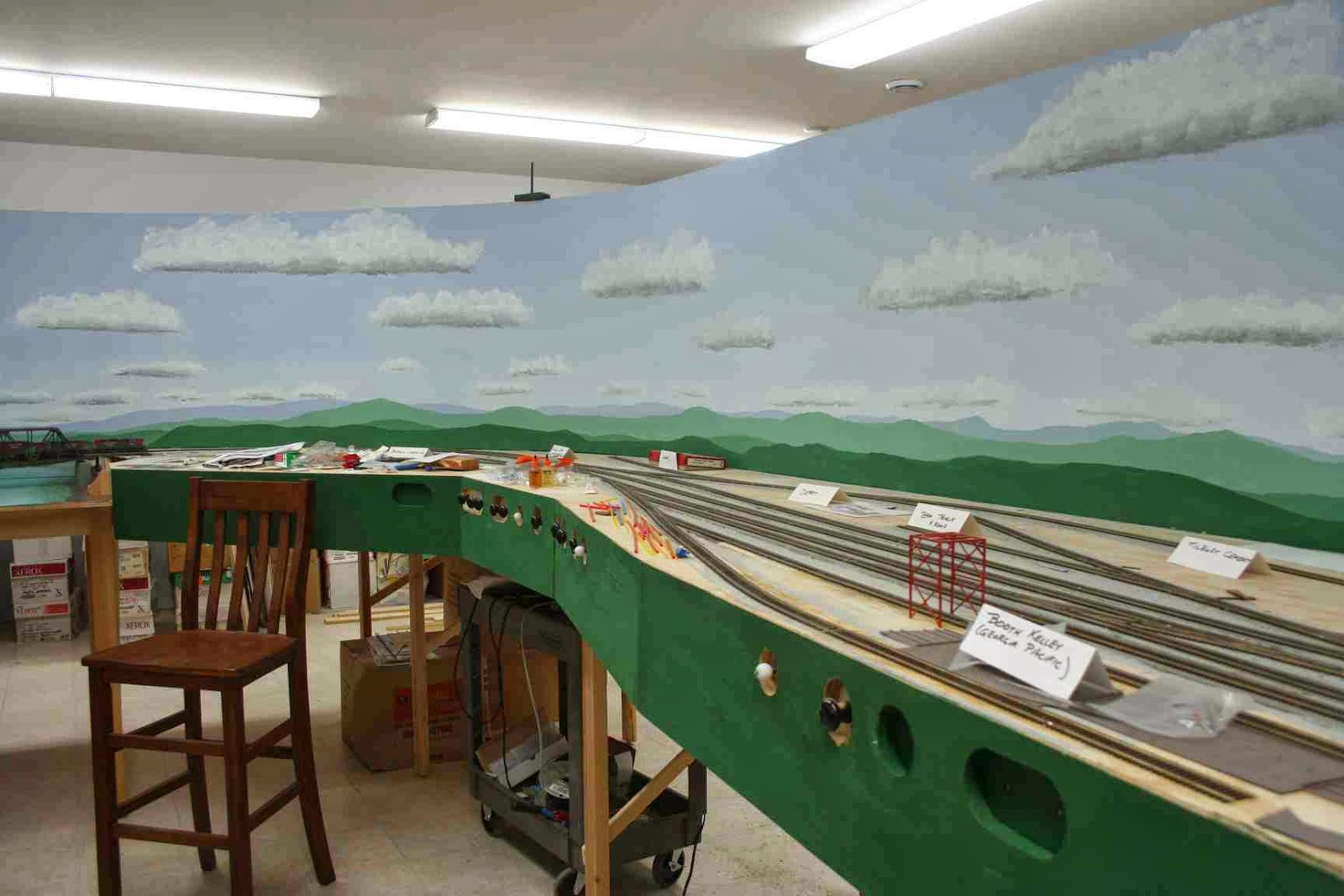 Springfield depot area with fascia and initial backdrop painted.
Posted by EspeeCascades at 3:35 PM No comments:

As I worked with the new roadbed climbing up out of Oakridge, I began to get the urge to better define the sky and horizon.  Caution!  Amateur “artist” at work!

I first needed to prime and then paint the basic sky on the walls and corner coving behind the new roadbed.  I used the same graduated fade from “sky blue” to horizon haze described previously.
http://espeecascades.blogspot.com/2012/11/backdrop-sky.html
Once again, I was struck by how this simple treatment of the backdrop sky seems to expand and define the model railroad world. 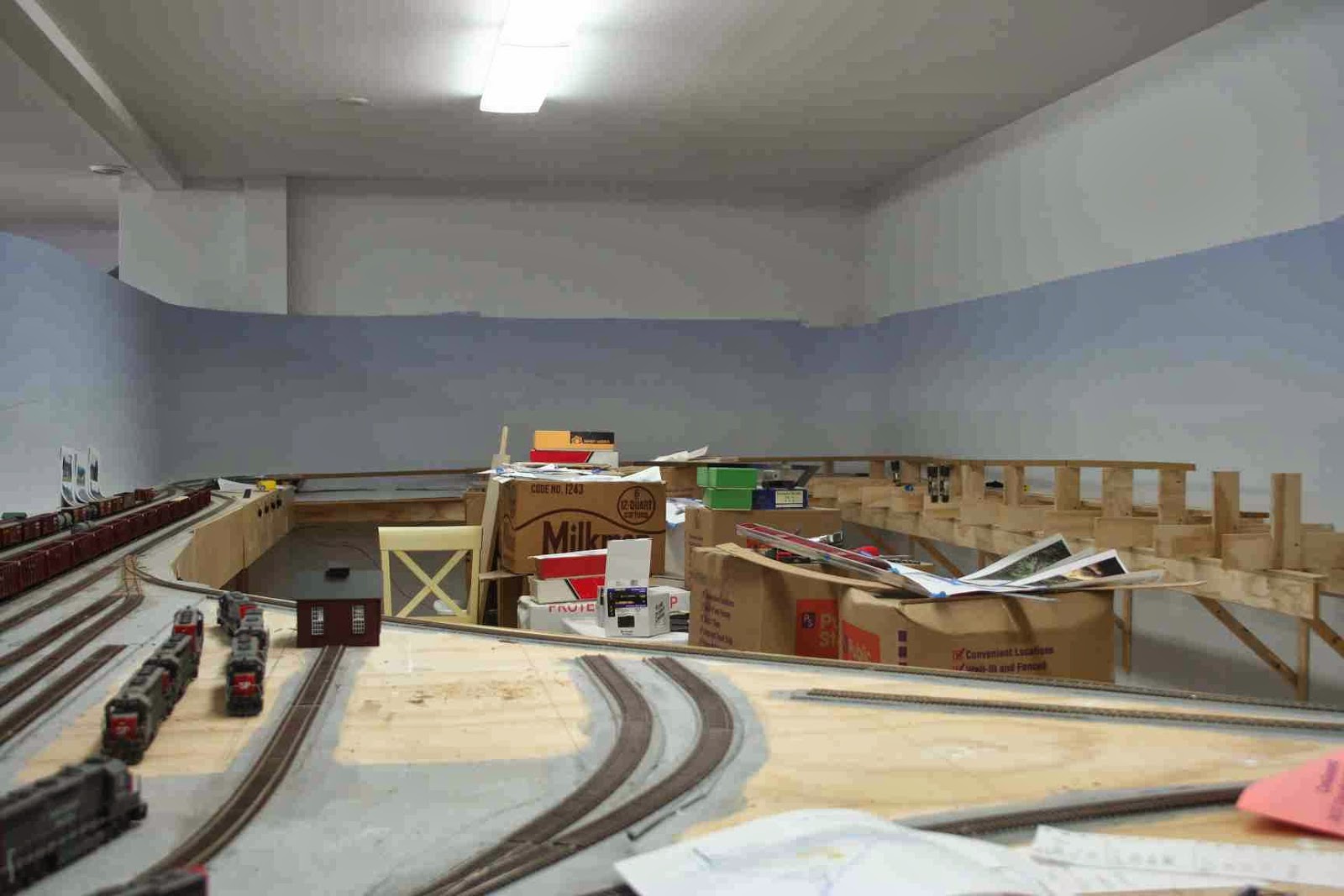 Backdrop sky treatment RR-West out of Oakridge.  Additional lights will be mounted on the ceiling in this “black hole” as well as light fixtures below the planned upper deck.

This time around, I was careful to note where the background mountains will be so the haze layer (mostly white paint) could begin at that height.  Preparing for the initial backdrop terrain definition elsewhere, I had noted my original mistake of not accounting for the band of terrain that defines the “bottom” of the sky.  While the sky paints were out, I went back and redid the backdrop sky behind Springfield and the Marcola to Westfir sections.  The sky haze behind Eugene already was at the right height.

I’ve been asked what color I use for my sky.  I now understand the chuckle this question is greeted by usually, for I now have the same response.  The sky color is very subjective and will shift with time of year and altitude.   I used photos I shot in the springtime (my chosen modeling season) along the Cascade Line to guide my selection.  After looking at many blue paint cards, I finally settled on a blue shade from a card we used for other areas of our house.   This also settled on using Sherwin-Williams paint.  It simply was a matter of convenience.  The base “sky” blue I am using is Sherwin-Williams SW 6527, “Blissful Blue.”  I mix this in various ratios with the white paint base to get the half dozen colors I use for the color banding that leads to the fade to haze.  See the prior post on Backdrop Sky for more detail.

Continuing with the basic paint, I wanted to use house paint to define the basic landforms on the backdrop.  A simple three-color treatment can be remarkably effective in defining the horizon and landforms.  The furthest away mountains are painted using the basic sky color (“Blissful Blue”).  I used green paint for the other two layers, representing closer terrain.  Returning to Sherwin-Williams, I used their color card 66 to get my two greens, plus a third, darker, green for the fascia.  Layer two is mostly made up of SW 6458, “Restful.”  The closest (lowest) layer is SW 6460, “Kale Green.”  The fascia will use the darkest green from this series, SW 6461, “Isle of Pines.”  While painting the terrain, I freely mixed up shades of these colors by combining them on my painting pallet.  Though I have identified the specific paints I am using, I offer them only as a report of what I did.  “Your mileage WILL vary!”

The next step in the backdrop painting was to paint some practice panels.  I cut up a sheet of hardboard into 2x4 feet panels.  These panels received my standard sky treatment (blue fading down to haze at the horizon).  I then tested and practiced each technique I would use before I applied it to the “real” backdrop.  Even with that, I find myself returning to the layout backdrop to modify or refine.  The backdrop painting is an art form.  Though not “high” art, it still requires development of skills usually undeveloped by model railroaders.  That certainly applies to this retired professional engineer! 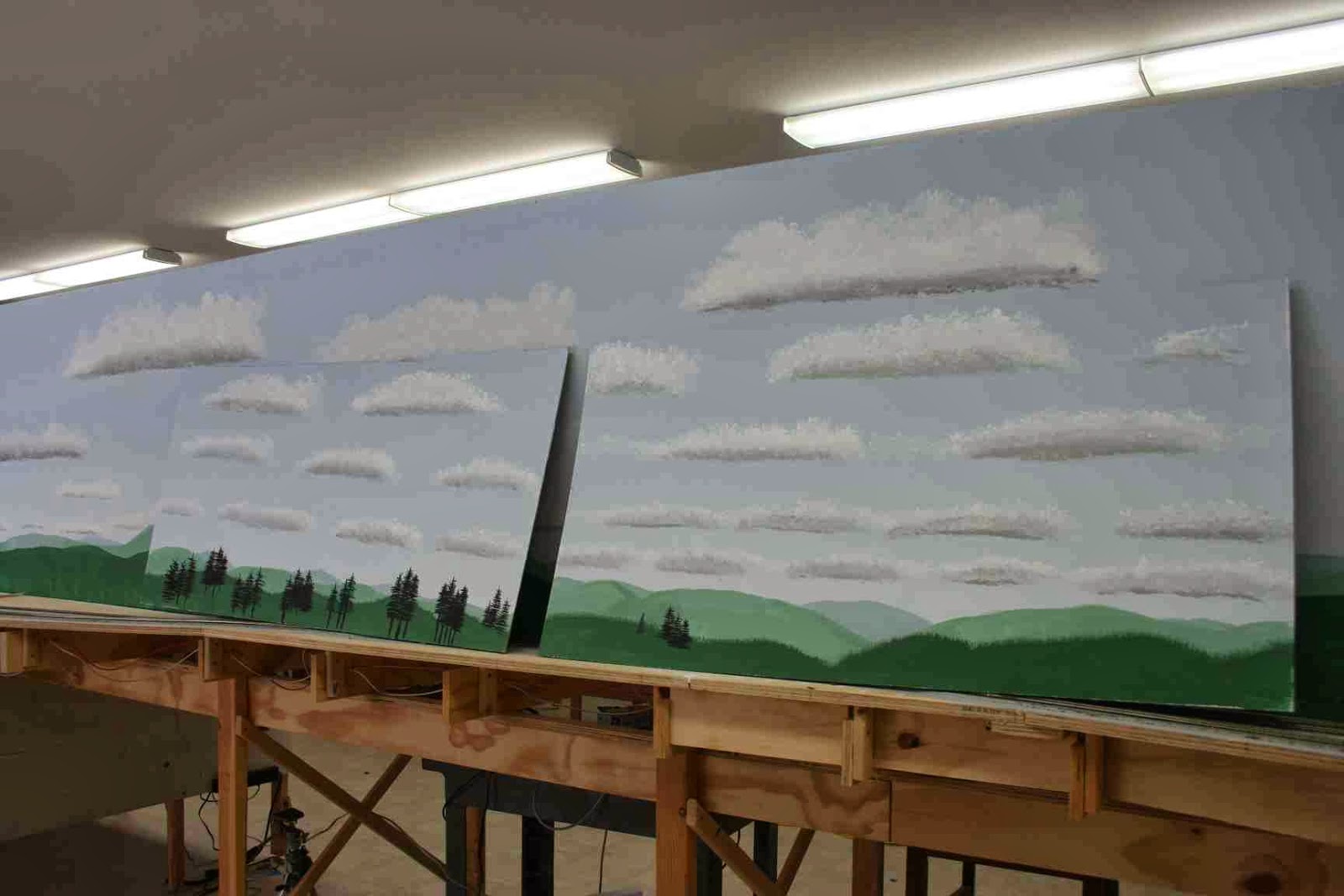 Backdrop practice panels propped up on the layout—my standard “easel.”

After sketching a chalk line for the distant horizon line of mountains on the backdrop, I began with clouds.  Though Chris Lyon makes an excellent point about painting cirrus clouds, I needed to move up to cumulous to represent Western Oregon in the Spring.  Mike Danneman describes a technique with artist brushes.  An alternative is to use natural sea sponges, effectively dry-brushed (tapped) onto the backdrop.  The sea sponge technique was described in a Mainline Modeler article by Carol Somers in March 1986.

I decided to try the sea sponge technique first and quickly found I could get the effects I desired.  I define the bottom edge of the clouds with a mix of white, blue and a bit of artist acrylic neutral gray, mixing “to suit.”  It is important to maintain perspective.  In this case it means small clouds in the distance near the horizon, growing to larger, nearer, clouds as one gets “higher” in the sky.  At this stage of my artist’s development, I still am too regular—the curse of an engineer.  I keep working on the clouds and am moving toward my desired goal.  DO use photos of the sky and clouds to guide your efforts.  You wouldn’t model a boxcar or structure without them, so, also, with the backdrop.
Once I had the clouds in place, I began with the distant mountains.  As noted above, I used the basic sky blue to define the most distant mountains.  At Eugene, I used a faded (with white) version of the blue, as I wanted to convey even more distance.  Next was either the standard light green (“Restful”) or a mix of it with the sky blue.  Finally, I defined the closer mills with the dark green (“Kale Green”).  I reworked the Willamette River bridge scene from my first attempt to “raise” the distant mountains.  I also ended up redoing my first attempts at trees in this scene.  I used a technique with a fan brush and black paint Chris Lyons has described in prior (and hopefully the new) videos. 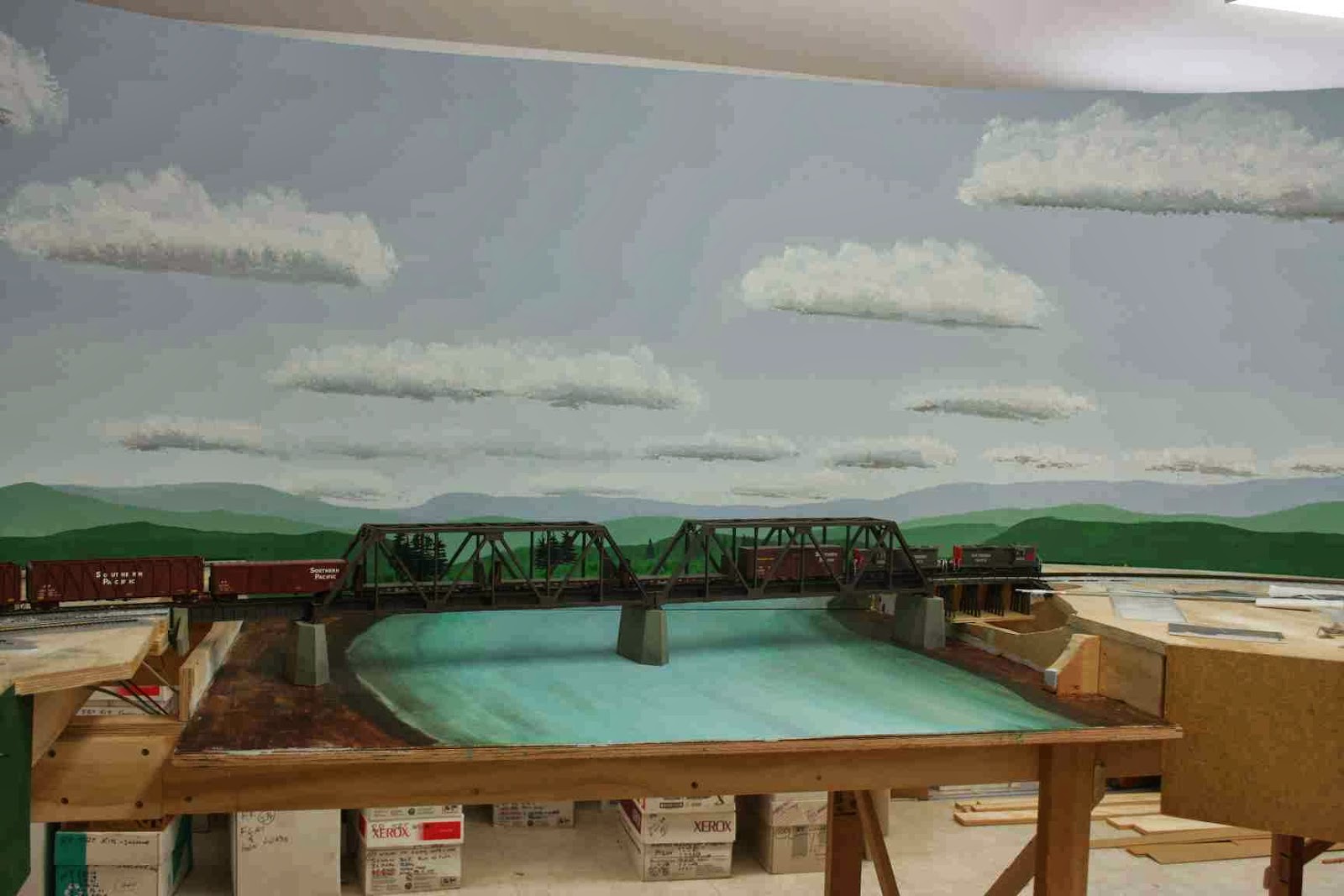 I finished the current effort by defining the basic backdrop terrain behind Eugene, Springfield and the Marcola to Westfir stretch.  That is around 100 feet of backdrop. 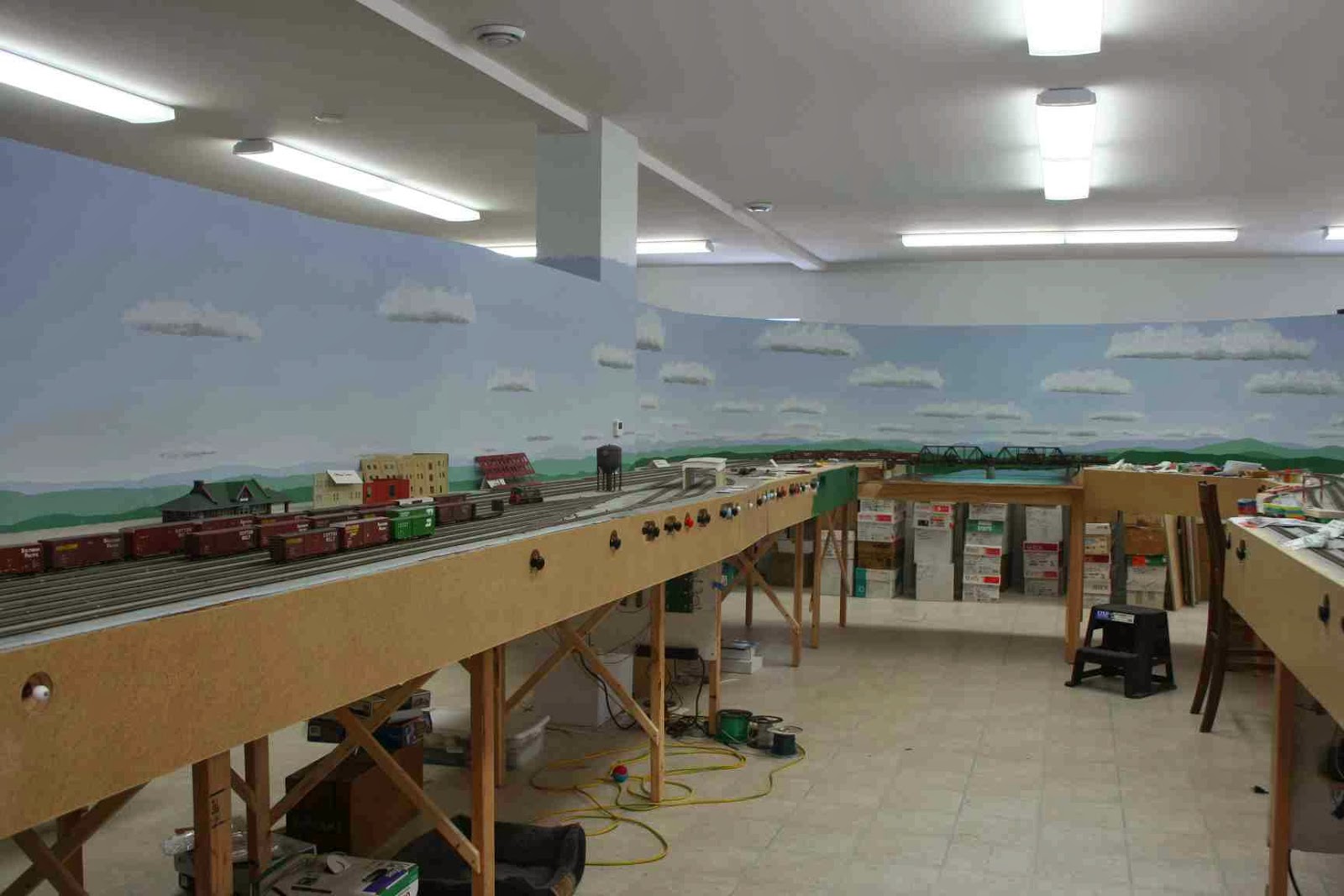 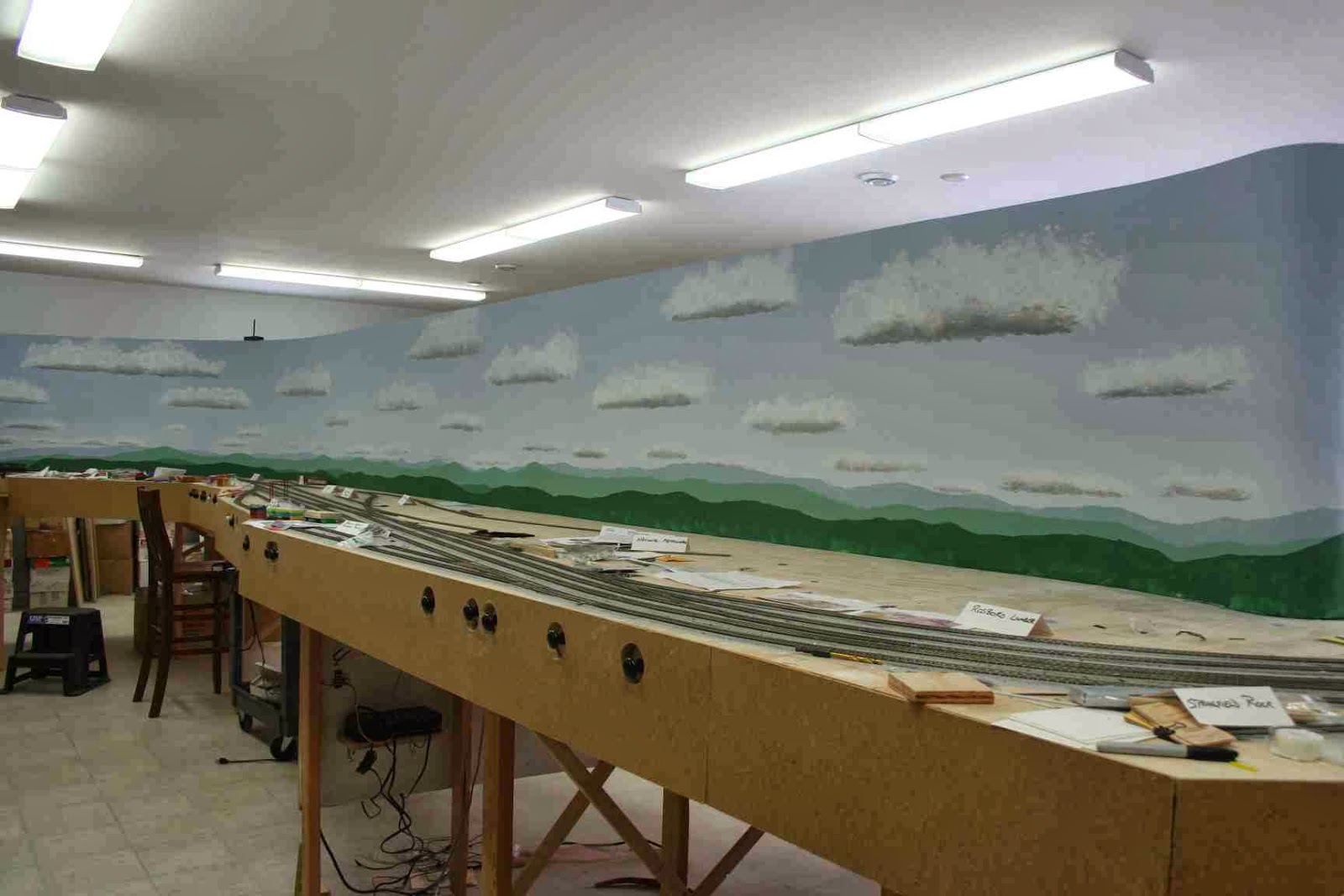 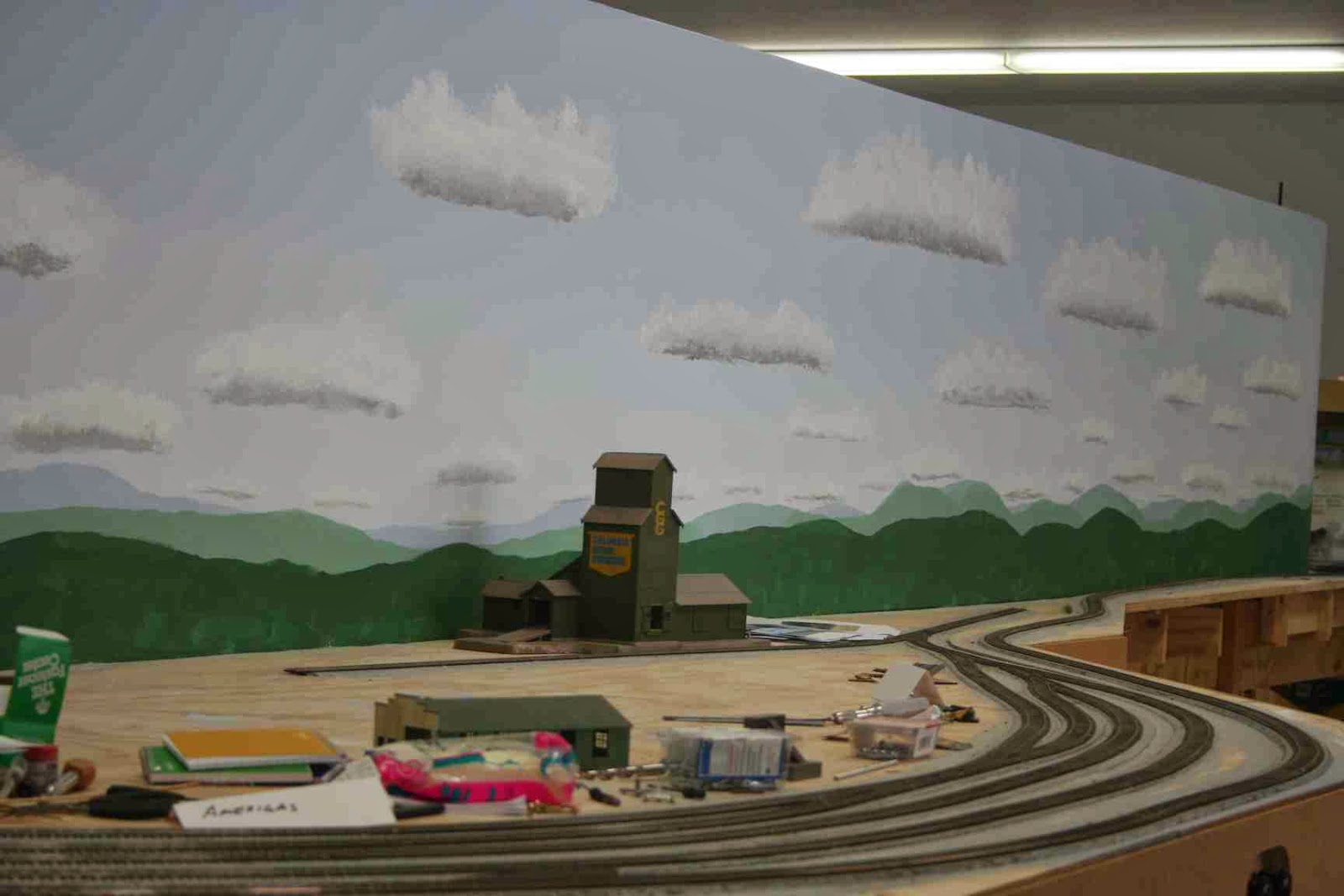 The backdrop very much is a work in process.  I will continue to refine or change as I develop my “artist” skills.  Fortunately, the most important skill has been honed over the years—observation.  I’ve taken a number of photos and will take more to guide my efforts.  I can’t do anything about talent, but I can develop skill.

Posted by EspeeCascades at 5:09 PM No comments: