Following the push to get the railroad ready for its first operations, I took a breather on concentrated tasks.  Two issues highlighted by the first operating crew were worked on—switch point gauge and adding to the car fleet.  The switch point gauge issue has been easy to address.  It involves melting the solder for the curved stock rail at the two printed circuit board (pcb) ties closest to the point ends and moving the rail out slightly.  I adjust for widest tolerable gauge outside the points which results in minimum check gauge at the points with their extra width.  I also note the FastTracks ™ instructions call for filing the points to a sharper point than I have been doing.

As to the car fleet, a quick search through my moving boxes quickly found another ten chip gondolas and a half dozen tank cars.  I also located fifteen Athearn lumber box cars needing only modest work to get them into operation.  Couplers were changed on all of the “new” cars, as well as the ExactRail wood chip gons.

Turning back to construction projects, I decided to address the basic backdrop behind Oakridge.  My prior backdrop efforts provided for Eugene and Springfield.  Now I have basic backdrop paint behind all current track and the roadbed extension out of Oakridge. 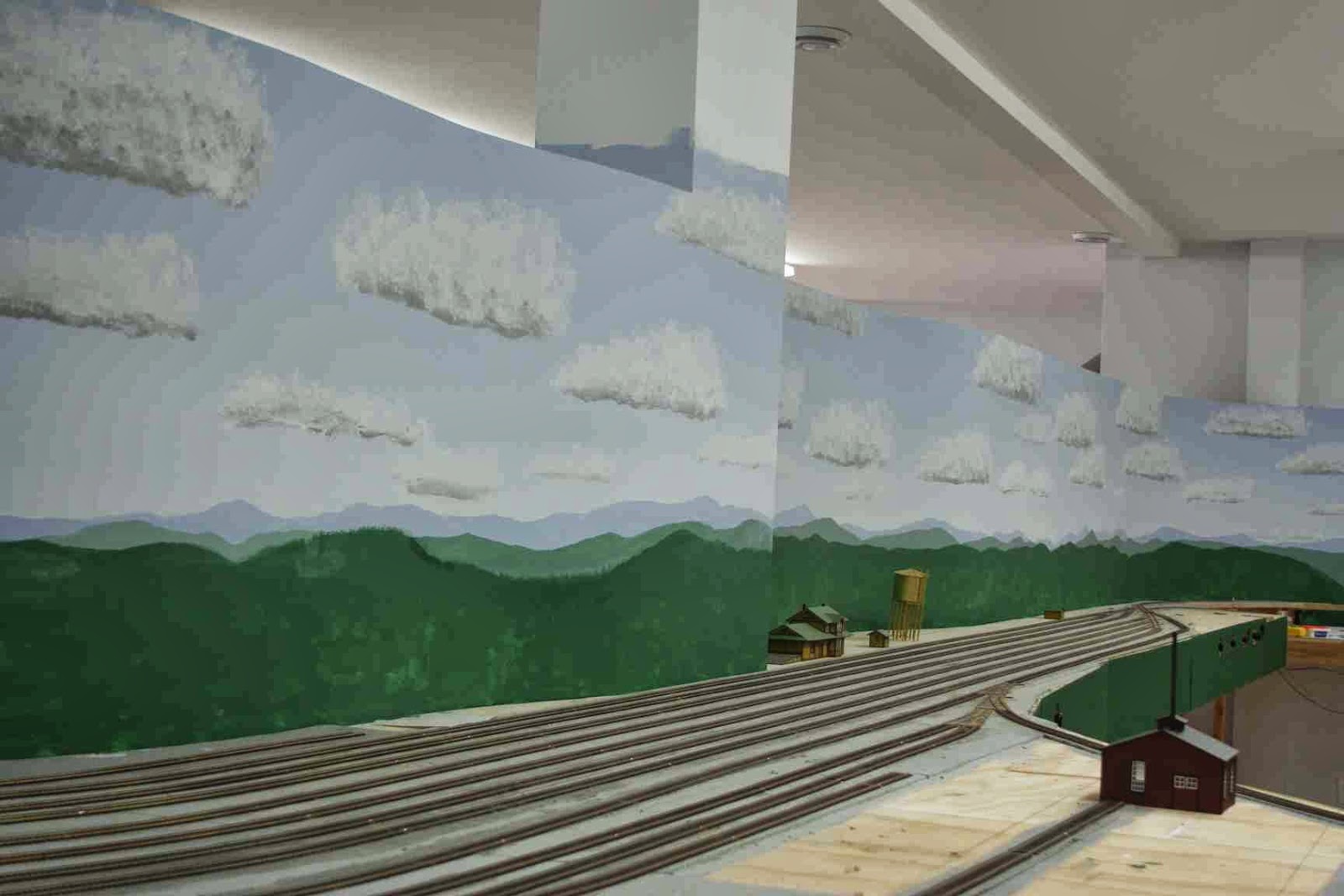 Completed Backdrop Base Behind Oakridge.

For the basic backdrop, I continued techniques employed previously.  This included reworking the basic sky fade from blue to horizon haze to account for a higher ridge line (horizon) behind Oakridge. http://espeecascades.blogspot.com/2012/11/backdrop-sky.html  Clouds similar to those behind Eugene and Springfield were painted using sea sponges, though the number of clouds increase as I move geographically East (up-mountain).  I used a similar three-color terrain effect, though I mixed paint colors for the middle tones to represent nearer ridges. http://espeecascades.blogspot.com/2014/02/defining-horizon.html  Finally, the immediate nearby ridge height was increased to represent the nearby ridge at Oakridge.  I will return to this ridge later to add trees— a mix of Douglas Fir and late winter Oaks (The Oak in Oakridge!). 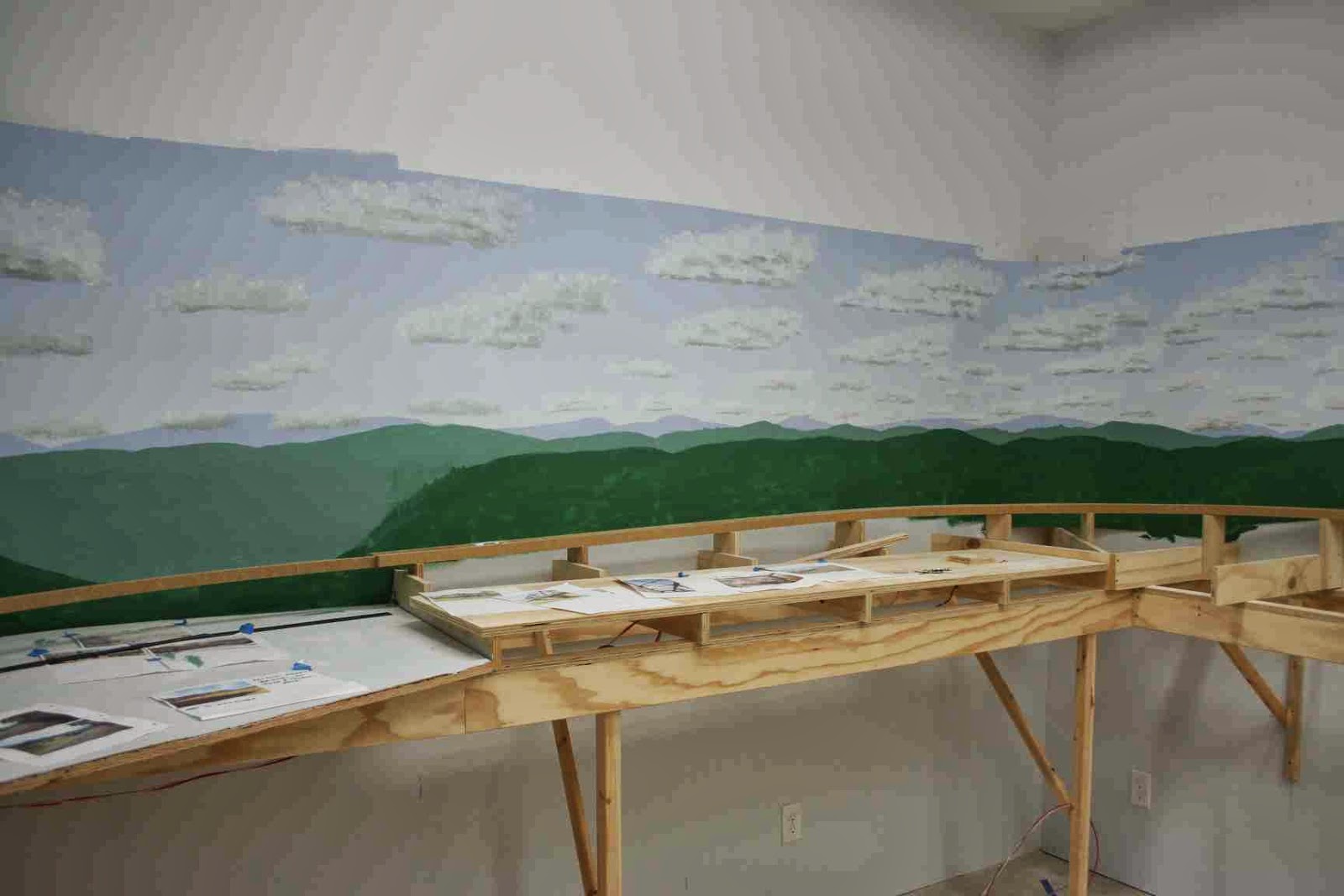 Salmon Creek and the platform for Pope and Talbot at the RR-West (geo-East) end of Oakridge. 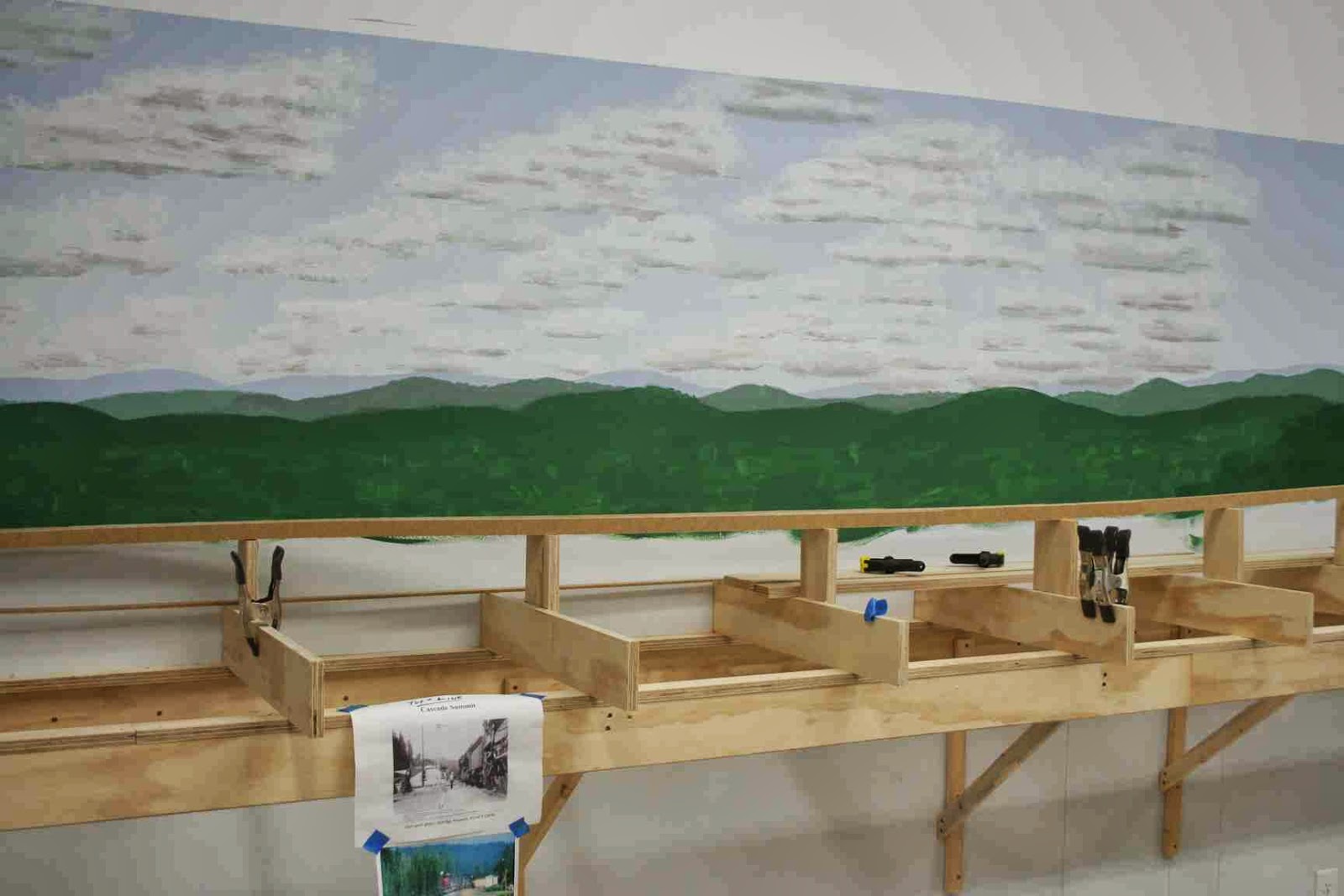 Backdrop in the “Pryor” area behind the climbing roadbed.

My initial efforts produced at least one anomaly that I chose to replace.  I created a high ridge behind Oakridge that stood too tall.  After sitting with it for a couple of days, I pulled out the sky paint to obscure the ridge, returning the focus to Oakridge.  This was a good reminder that most anything in model railroading can be redone for a better effect. This is the “art” of model railroading.  In this case it really was an art technique that was used! 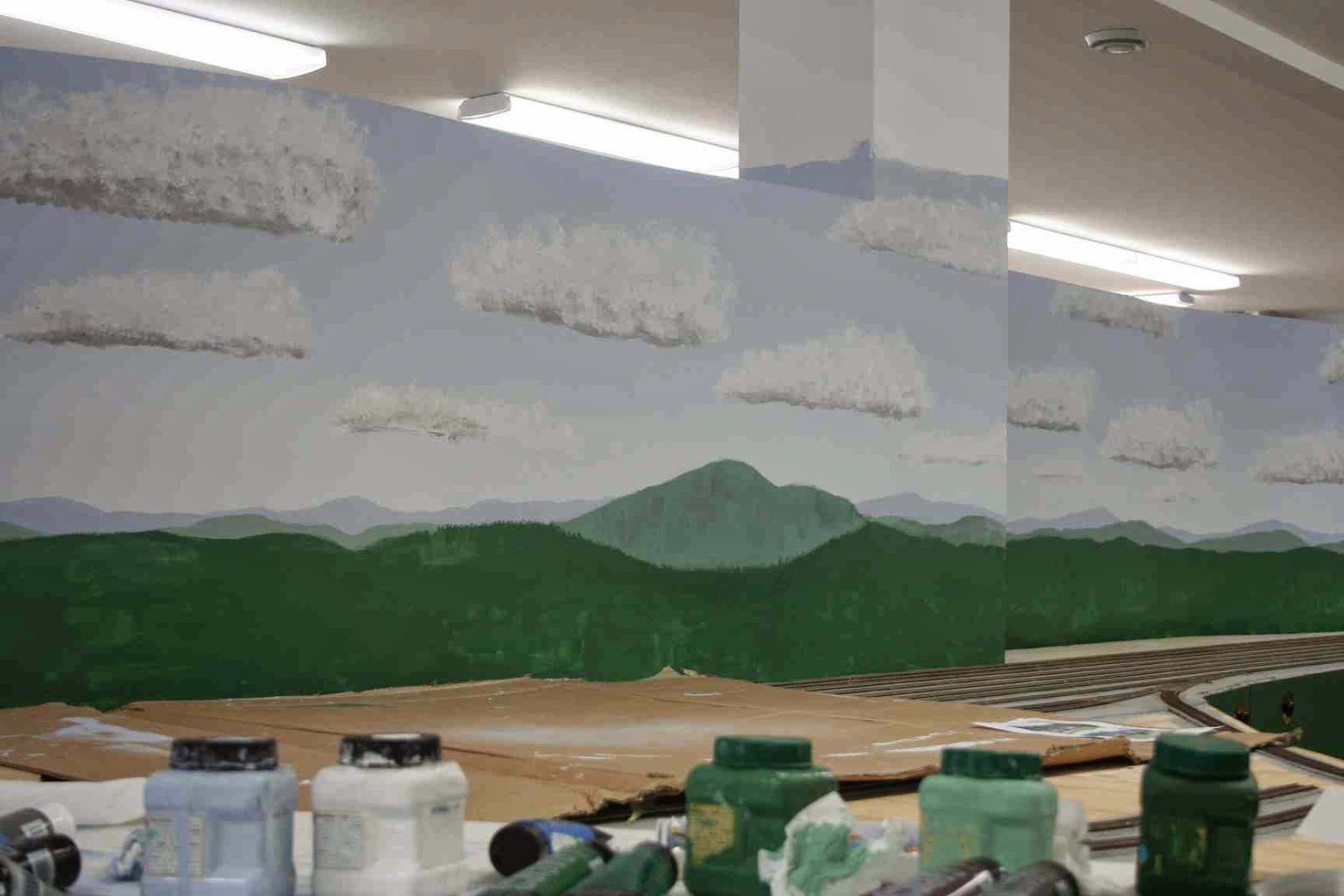 High ridge and hill behind Oakridge. 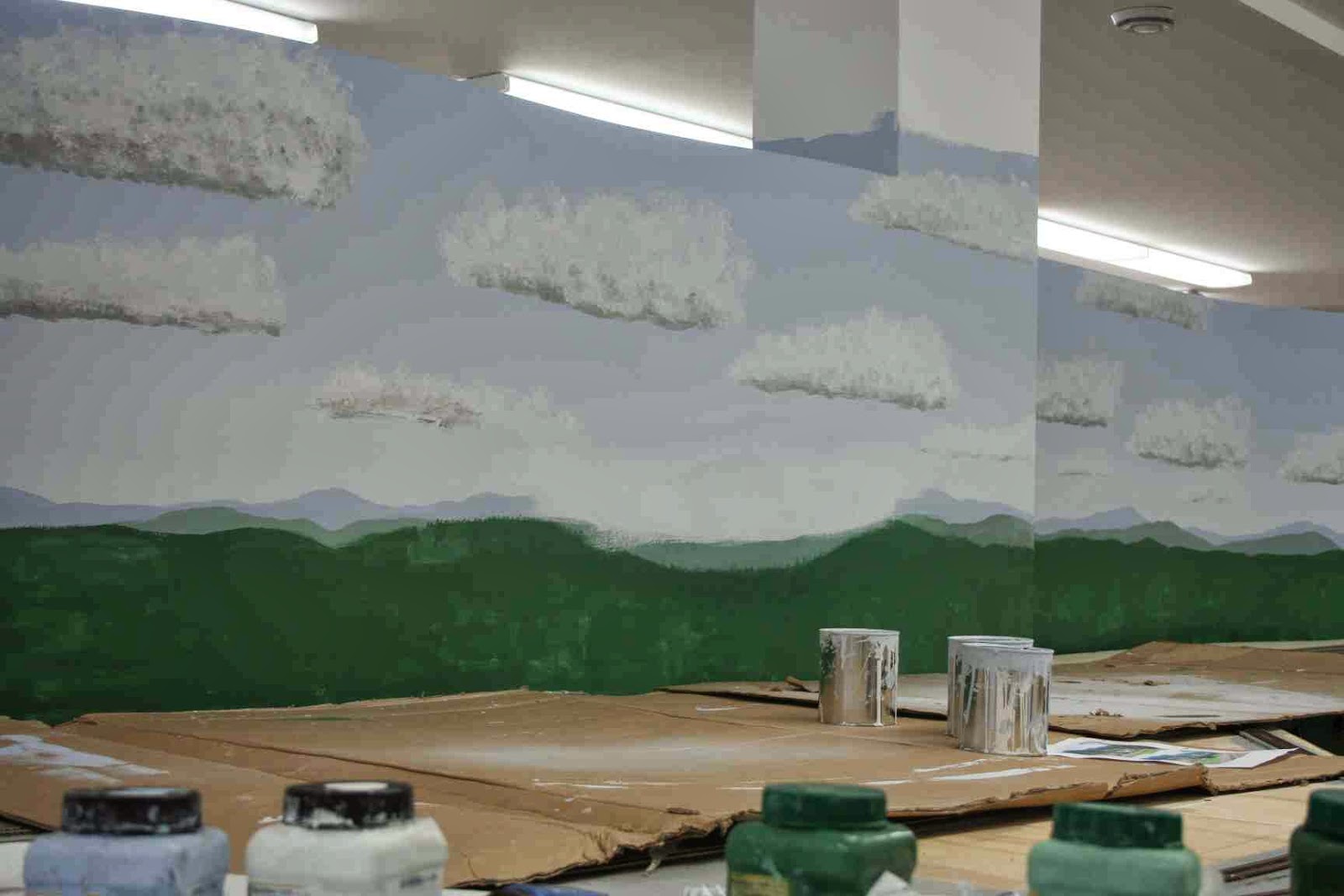 Ridge and hill wiped out by fresh sky paint. 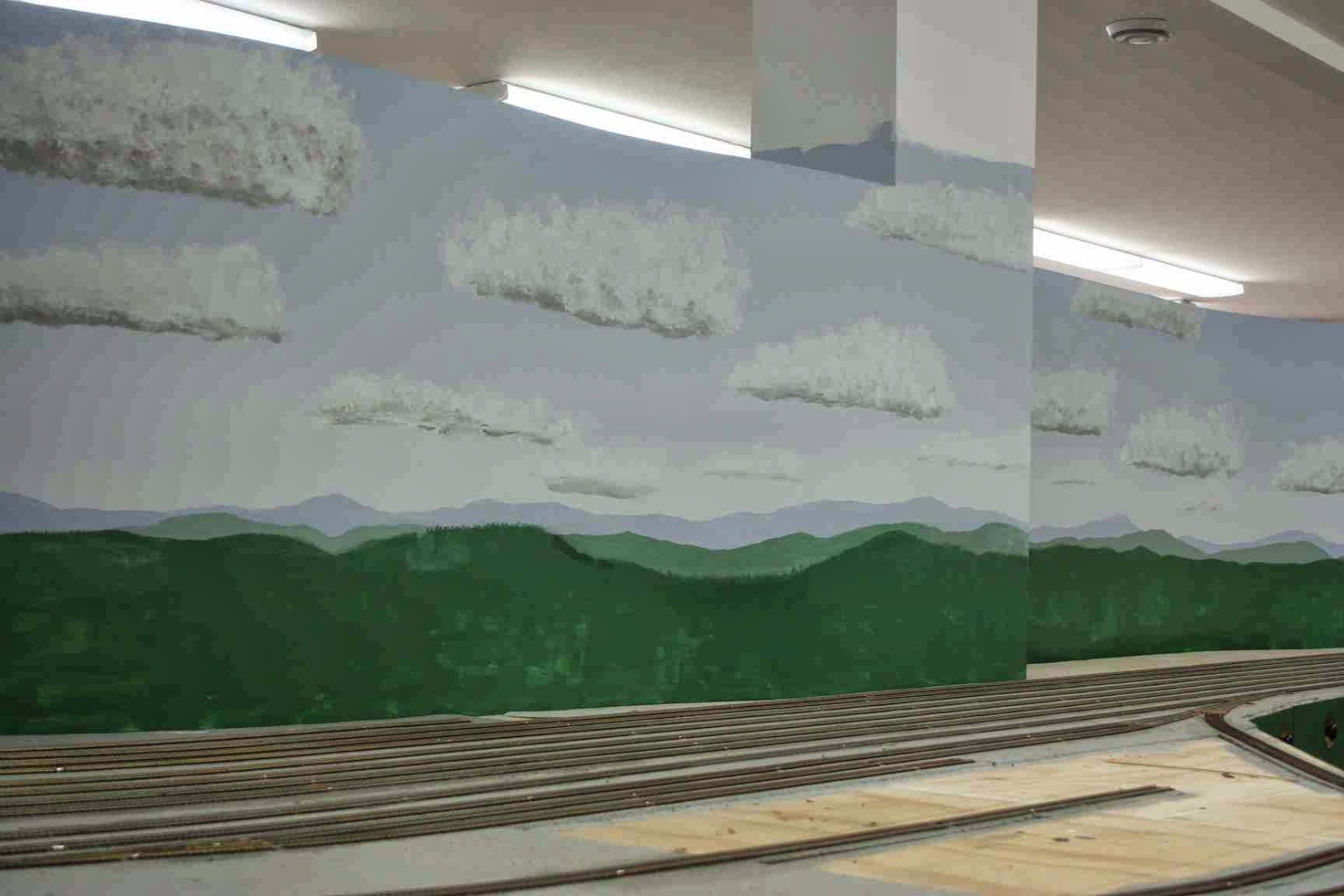 Replacement backdrop ridge.
Posted by EspeeCascades at 5:04 PM No comments:

My HO scale SP Cascade Line hosted its first operating session with operators other than myself.  In my working career, this would be a “first flight” event, a major milestone.  This was a critical step, as it subjected the layout systems to objective users who were unfamiliar with any details of its construction or equipment installation.  Preparing for this event meant working through many small tasks that had been set aside while pursuing some “larger” objective.  “First Ops” was the first time the railroad (layout) fully came alive. 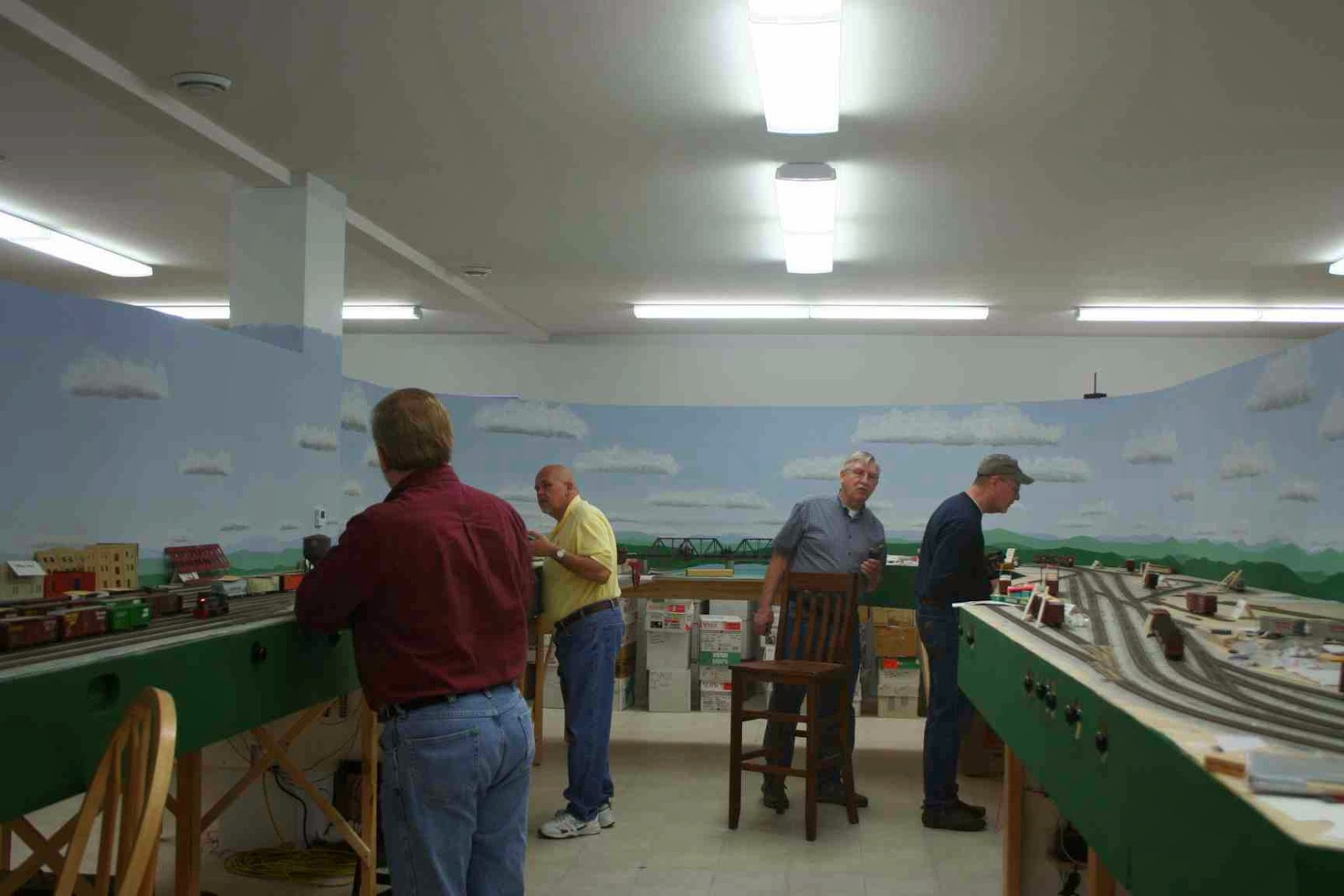 I am happy to report that although I have a list of action items to check out and correct, trains ran over the full railroad as it currently exists.  My group of four  testers ran through all turnouts, usually by pushing light cars through the switches—a tough test.

As I placed freight cars at industry spots typical of regular layout operations, I discovered just how large a railroad I am building.  This layout will consume many cars on its industry spurs.  The photo shows the situation at Springfield where one or two cars stand in for three or four.  I will be looking for specific cars and car types in my collection that were packed away long ago for moving and storage.  Some car types such as tank cars have been flagged as needing additional purchases.

My First Ops session did exactly what I hoped it would, revealing strengths and weaknesses of the operating core of the railroad.   It took nineteen months to reach this milestone.  Onward toward the “Golden Spike!” 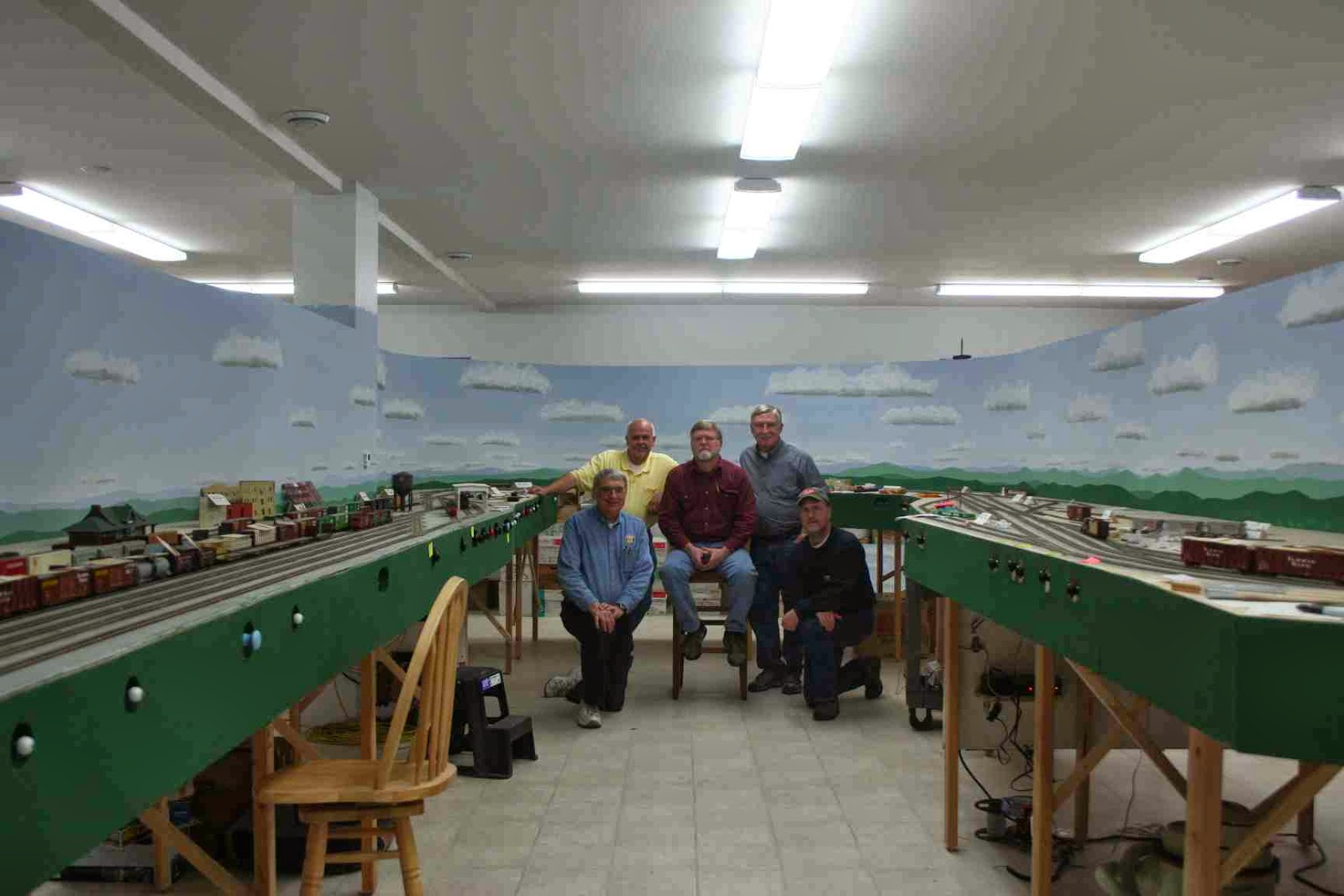