The battle to add a half dozen industrial spurs and a siding at RR-East Eugene has finally reached a functional stage.  The track has been installed and now wired. https://espeecascades.blogspot.com/2021/08/rr-east-eugene-development-1.html

Switch machines have been installed and now the control panels have been wired and deemed functional.  This last electrical push has been yet another “electrical war.” 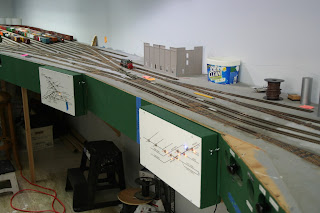 RR-East Industrial Siding and spurs completed and in service.  Note the headlight is on for the switcher!

“Simply” adding track, switch wiring, switch machines, and controls has been yet another frustrating “adventure.”  I have been painfully and frustratingly reminded that my original goal to have all of the primary construction completed on my railroad by the time I reached age 70 was a valid goal, mostly met, but now verified whenever a “modest” addition to the railroad is made.  Now a couple of years beyond that landmark age, I find it more difficult to crawl under the layout—and get back up—while vision has become more of an issue.

On the vision point, I had cataract surgery a couple of years ago.  This imposed the full brunt of presbyopia upon me.  Previously, my extreme near-sightedness actually worked in my favor, as I could remove my glasses and find all within my arm’s reach in focus.  Post cataract surgery, I now must use some vision enhancement, usually readers.  An issue for under layout work is selecting the correct reader correction for the task at hand.  I am now VERY conscious of focal distance!  I note the issues of body flexibility and vision as a warning to others as they embark upon layout construction.  Tailor your plans to your abilities.  I am doing ok, but frustrations show up now.

Once the track was laid for the new industrial zone, I needed to wire it.  I dutifully dropped feeders and attached them to the track power bus for this section of track.  Only after I had dropped all the feeders—but fortunately before I soldered them to the bus wires—did I finally attach my short circuit detector to the track or bus wires.  Argh!  I had a short circuit!  Best practice is to have that short circuit detector (it has a buzzer) clipped to the isolated bus wires as one starts connecting feeders.  That way one immediately identifies a short and can sort it out for correction immediately.  Instead, I was faced with after the fact trouble-shooting.

I was able to split the siding into two halves.  This greatly aided isolating the short.  I also pulled all of the feeders off the bus wire connections and started over.  I found the first of two shorts when I started hooking up one of the spurs.  Visual inspection did not locate the fault.  I then cut the pc-board ties used in this section in half, figuring I might not have gotten the proper gap cut into those ties.  That still did not remove the short.  I finally isolated the problem to a pair of feeders.  Closer inspection revealed I had used the reverse color code (red is supposed to be the rail to the rear in this area).  Instead of my usual practice of the past that connected feeders to the rails just beyond the frog of a turnout, I had moved further out on those now extended rails—to spacing that was very close to normal track spacing between a pair of feeders.  That is why I did not spot this fault when inspecting underneath the layout—it looked like all the rest of the normal track feeders. 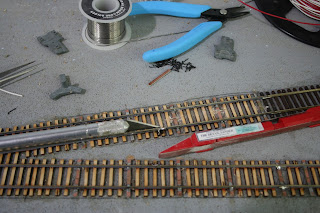 I continued to reconnect feeders to the track bus wires.  In the second half of the siding, I found yet another short at a switch.  This time the solution was identified fairly quickly.  I had not gapped one of the pc-board ties around the frog assembly as completely as necessary.  This was evident from a close inspection from above and quickly remedied with a cutoff disk in my motor tool.

Next up was installing switch machines.  I wire my Tortoise ™ switch machines with a tail leading to a terminal block.  I do this work at the workbench and then move to the layout.  In spite of needing to crawl under the layout and then check from above, I have found a system for installation that works for me.  It involves temporary installation of the machine using mounting screws loosely positioned and a double-sided tape pad on the machine.  Top side inspection reveals whether I must make any adjustments to the mounting or the throw rod.  Once satisfied, I tighten the mounting screws and move on.

One of the switch machines required an offset mount.  Circuitron’s fulcrum plate for the Tortoise ™ has a center hole and offset holes.  My previous attempt to use the offset holes was not successful, so I developed an alternative mounting of that machine.  This time, I did not relish the thought of needing to rout out a longer slot for the throw rod—all from underneath in a tight location.  I decided I would give the alternate fulcrum hole another chance.  This time I was successful.  One change I made was to bend the throw rod back to a vertical orientation above the fulcrum plate. 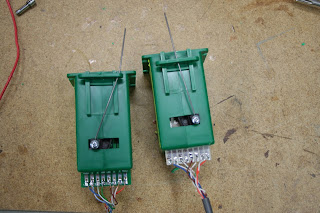 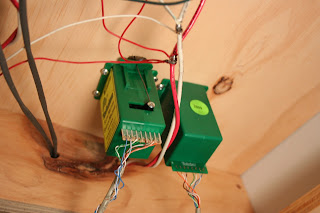 Motivation for the offset switch machine mounting.  The left machine is part of the yard throat for the Eugene Arrival-Departure Yard—critical trackage.  This machine was NOT to be moved!  The machine on the right is the new machine, using an offset throw rod.

With the track wiring done and the mechanical work installed, I turned to the controls.  Yet again, I encountered a roadblock.  I installed toggle switches for track switch control.  I had to split them between two panels, as each panel corresponds to controls in a specific geographic area on the layout.  One panel’s switches proved straight-forward.  The other panel showed a short (not again!).  After trying several trouble-shooting approaches and consuming a couple of weeks thinking about this, I finally admitted defeat.  I removed the new toggle switches and their wiring and started over.  This time, I started wiring from the toggle closest to the connection to the twelve-volt supply for switch machines.  This approach worked.  No more shorts, but one machine would not throw.  After attempting to locate the fault, I finally just dropped the switch machine and replaced it. 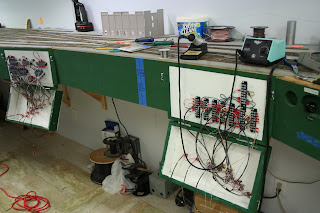 As seen in the first photo of this tale, the electrical gremlins have been beaten back.  I feel a bit battered and bruised and certainly frustrated, but it is finished!

Posted by EspeeCascades at 6:04 PM No comments: