Several weeks’ effort under the layout led to today’s milestone:  Trains are rolling on the HO scale SP Cascade Line!   All track currently laid in Springfield and extending to Westfir  has switch machines in place, frogs wired, and the track wired.  Nine electrical blocks connect at the Springfield electrical distribution panel to two power districts, now connected to my command station/booster.  Other layout builders will understand the significance of that first train rolling via the designed wiring plan.  A banner day! 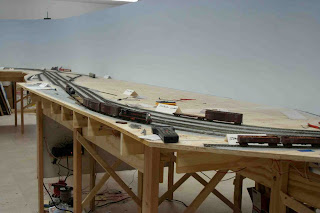 It has been a long journey to this point.  That journey included retirement, selling a house, building the new house, moving interstate, settling into the new house, and beginning layout construction.  This blog is now a year old, though construction only began in August.  Today was the first time in years I have been able to run a train on MY railroad.

There is much to happen both on top of and below Springfield, but the ability to run a train will move many of those tasks along at an accelerating pace.  The immediate next tasks involve bringing switch controls out to a fascia panel.  Ten of the current 37 turnouts have switch motors on them, which will bring about the first of the computer interface boards (albeit in a stand-alone mode).

For now, I am savoring the moment of train operation on the first major section of the layout.   Success and progress!
Posted by EspeeCascades at 6:36 PM 1 comment:

After my turnout trials over the past month, I completed final installation of the Springfield track, followed by installation of switch machines.  I find myself returning to basics with both turnouts and wiring.

My decision to use Fast Tracks tools for all future turnouts has relieved my stress level and made me much happier with the result.  This is supposed to be a “hobby,” though a layout the size of my SP Cascade Line takes on an appearance of a full time job.

In mid-February, I placed a rush order with Fast Tracks for #6 assembly jigs and the point and frog tool.  This quickly provided the means to manufacture #6 turnouts, albeit delayed in delivery by the US Presidents’ Day holiday.  In short order, I assembled ten turnouts.  I am now pushing closer to twenty #6 and another half dozen #8 turnouts since making the commitment to Fast Tracks methodology.

I am VERY pleased with the result of my “back to basics” (hand/jig made) turnouts.  Fast Tracks has been very responsive to my orders in spite of their February shift to their new “Copperhead” printed circuit (pc) board ties.  As with my efforts, Fast Tracks has gone “back to basics” by bringing more in-house control over their pc board tie manufacturing.  The new ties handle about the same as the former sheared ties, albeit without the little ridges that would sometimes appear. 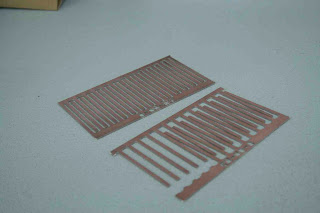 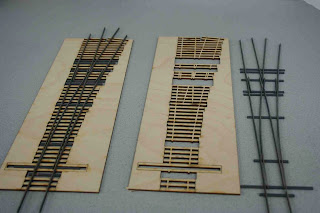 Number 6 turnouts manufactured with Fast Tracks tools and supplies.  Blank wood beyond ties will be broken off before use on layout.

With the turnout “crisis” resolved the time to wire part of the layout arrived.  Although this will be a DCC (North Coast Engineering) layout, I still must wire much of it as blocks for detection purposes.  My first pair of blocks, the long track segments for the mainline and siding at Springfield, included several switch motors.  I am using Circuitron Tortoise ™ switch machines for the powered switches.  I am using Blue Point switch machines for manual throw switches (industry spurs off unsignalled tracks).

The Tortoise machines threw a curve at me as I wired and began checking the layout.  I took a brief glance at Circuitron’s instructions and blasted ahead with what I thought I saw in the wiring diagram.  I have been looking at a lot of wiring diagrams as I educate myself about the circuits I will use to install Centralized Traffic Control and signaling.  That was my downfall.

I interpreted the Circuitron diagram as having a more conventional double pole double throw switch in addition to the movement control.  The familiar toggle switch convention (also used on the Blue Point devices) places the poles in the middle contact position with the throws straddling their pole.  This would imply the contact sets for Circuitron “ought” to be 2-3-4 and 5-6-7 with the poles as contacts 3 and 6.  I started by wiring my machines that way.

I had “strange” continuity readings when I put a VOM tester on the contacts, but I didn’t think much of that and went ahead wiring.  On layout, those “strange” readings manifested themselves as dead shorts.  OOOPS!  It took me a frustrating week to finally get back to the Circuitron diagram and now see what it really indicated.  The pole contacts are the inner pair: contacts 4 and 5.  That led to rewiring—on site--of ten switch machines already installed in the layout.  Grrr! 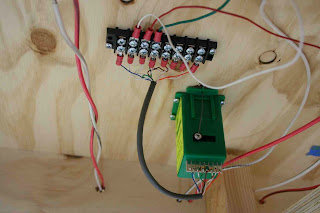 Yes, my assumption made an a** out of me.  Back to basics: read the directions!  I now also followed Allan Gartner’s (http://www.wiringfordcc.com/index.htm) FIRST wiring suggestion: build a continuity checker (his uses a buzzer) and use it throughout any wiring job on the layout.

Sound fundamentals such as solid turnout construction methods and rigorous wiring—following the directions—are the only way this large layout will become operational and remain so.  Off we go!
Posted by EspeeCascades at 10:56 AM No comments: