I continue to work on the new industrial area at RR-East Eugene—just beyond the Eugene Depot area.  In my previous post, (https://espeecascades.blogspot.com/2021/08/rr-east-eugene-development-1.html) I described the primary track layout, fabrication and installation of switches and the track that completes the industrial siding.  The current effort might be described as, “Adventures in Track Laying.”

While the track and switches for the industrial siding were laid, more track work was needed to complete the track in this area.  Three tasks remained: filling in the blank spots in the tie blocks with pc-board ties, firmly fixing curves and transitions with spikes, and completing the industrial spurs. 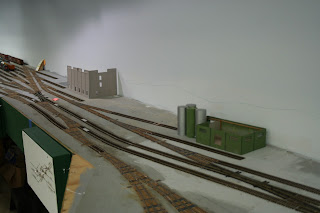 As noted in the previous post, I chose to extend the stock rails of the turnouts I fabricated, allowing me to complete all of the track needed for the industrial siding.  This replaced any need to fit flex track pieces between turnouts.  The rails for the turnouts needed to be trimmed to fit the space.  I used Fast Tracks QuickSticks ties to extend the track beyond the switch tie blocks.  These ties feature blocks of five ties separated by gaps intended for pc-board ties.  I needed to install those pc-board ties.

Before I installed the turnouts and their extended tie blocks, I removed the webbing between those blocks of five ties.  Unfortunately, I missed doing this for one of the turnouts—one with quite extended tie blocks.  That left me with needing to remove those webs after the turnouts and ties were glued (adhesive caulk) to the roadbed.  Ugh!  Fortunately, I remembered a Dremel cutter that could assist me.  Dremel High Speed Cutter 199 has a cutting teeth rim on a disk that is just under 3/8-inch in diameter and 1/8-inch thick.  These dimensions proved perfect for this job.  The cutter fit neatly between ties on either side of the gap and the thickness was just right for getting underneath the rail and above the roadbed.  Running my Dremel tool at modest speed, the cutter made quick work of the undercuts I needed.  Whew! 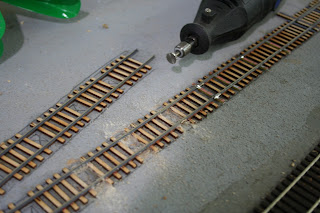 Dremel tool with #199 cutter used for removing the gap webbing between tie blocks after the turnout and ties were mounted to the roadbed.

Also done before I started mounting the pc-board ties was spiking of rails through the one curve and a transition section that connected to the double slip switch on the second mainline track coming out of the depot area.  The roadbed for my town and yard areas is composed of ¼-inch cork sheet glued to ¾-inch plywood.  I have found I need to pre-drill mounting holes for the Micro Engineering small spikes I use, as they need to penetrate the first resin-bond between layers of the plywood.  Once again, my Dremel tool with a #76 drill in its collet was used with the tool set to low speed.

As to spiking, in the past I have used needle nose pliers to hold the spike.  That often became a bit frustrating as spikes slipped and flew off to oblivion or bent in place.  This past year, I finally broke down and purchased spiking pliers from MicroMark.  The MicroMark Spike Insertion Pliers # 82839 feature T-grooves milled into the ends of the plier jaws that neatly fit and grasp a spike.  What a great tool!  I am able to place the spike in the plier jaw and firmly hold and guide it into position and then drive it into the roadbed, finishing by driving the head with the end of the plier jaws, just as would be done with needle-nose pliers.  The difference is that the spike cannot move around during the initial placement and drive into the roadbed.  This was a huge improvement for me!

With the rails held in place in the couple of critical spots and gaps opened up between tie blocks, I could proceed to mounting the pc-board ties.  Those ties are thinner than the tie blocks, so they needed to be held up against the rail bottom as I soldered them to the rail.  I also needed to ensure they had a dab or more of caulk adhesive on the underside to help bridge the gap to the roadbed and help hold everything in place.

I have a handy pair of tools for holding pc-board ties up in this situation.  I had a cheap needle-nose tweezer set that de-bonded, forming two steel pieces with pints.  These two tweezer halves have proven to be very useful tools. 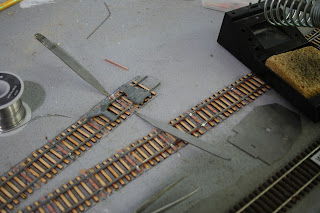 Printed Circuit Board tie held in place for soldering.  Note the track gauges on either side of the tie being worked on.

As I cleaned up the solder joints between tie and rail to ensure the flange-ways were clear of solder, I used a track gauge.  Early on in this process, I noted the track was becoming tight gauge in a couple of spots.  That was quickly dealt with by holding the rail on either side of the pc-board tie with a track gauge and then applying soldering iron heat to one of the tie joints.  I quickly realized I needed to employ the track gauges in this fashion for all of the tie mounting.

The final track laying task for this area was to extend the industrial spurs using flex track.  This was the easiest of the track tasks.  I used my standard technique of cutting and fitting the flex track and then mounting it to the roadbed using adhesive caulk.  With that, the track laying was done in this area.  Track wiring, switch machines and controls remain before this area becomes operational.