As I close out 2015, I reflect back upon a very successful year for my HO scale SP Cascade Line.  All of the hard work in the first two thirds of the year paid off—just in time—with a successful operation and layout tours for the PDX2015 NMRA National Convention.  After a break from the intense work to meet that goal, I continue to flesh out the railroad, notably with tracks associated with the Eugene Arrival/Departure Yard, which serves as lower level staging.  Monthly operating sessions have become the driver for much of the work.

During November, I completed laying the remaining staging loop tracks plus the five tracks associated with the diesel servicing facility for Eugene.  I did not get those tracks wired for the early December operating session.  That necessary, but “invisible” task has consumed my railroad efforts during December.  For me, wiring often is a thankless task—not much visible progress.  Still, it is absolutely necessary to make the locomotives go and the track switches work.

The core work is now complete, allowing me to activate all of the Eugene staging tracks and use the diesel servicing facility.  Three switches at the “back” of that facility still need to be controlled, but the switches at the “front” of the facility will support the necessary functions.  With that, I can move all of the unassigned motive power down to the new service facility and ready tracks. 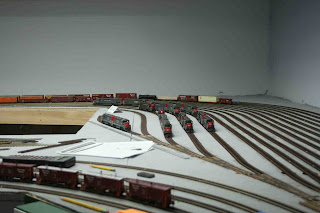 Moving the ready for assignment motive power down to the ready tracks has been a long term goal.  Ever since initial test operations were started a year and a half ago, my crews have been using the car repair tracks as a defacto engine facility.  Along with this, they sent out full trains from the Eugene classification yard.  That ends with the new service and ready tracks.

In between wiring efforts, I took “daylight breaks” to pull more locomotives and freight cars out of packing materials.  Couplers and decoders have been added, as appropriate.  I am pushing toward adding four trains’ worth of equipment to the railroad for the next operating session.   I have yet to create a waybill system for the cars that I desire.  Work I did for the California Central Club fifteen years ago defies recreation.  Sigh.  Nonetheless, I am making progress! 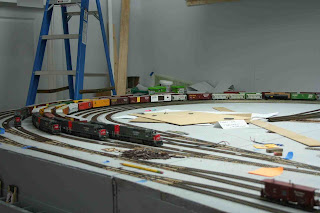 Trains lined up in Eugene staging, getting ready for the next operating session.

Here is to a great new year!  May 2016 be as successful as the past couple of years have been for my SP Cascade Line.
Posted by EspeeCascades at 7:39 PM No comments:

Operations on my SP Cascade Line are settling into a monthly pattern.  This is a VERY good thing!  The BIG push to get the layout ready for the NMRA National Convention in August now pays dividends in the form of an operable railroad and a fairly sizeable crew of folk willing to show up for operating sessions.

I had thought of taking a “bye month” in December as many have other obligations during the holiday period.  My regulars convinced me otherwise, so we held a “casual” session on December 5.  This coincided with an annual swap meet a half hour down the road, so we settled on a later start and a short session.  A dozen folk showed up, mostly my “regulars.” A good time was had by all.

My track laying of the past month was just that—track.  I did not complete getting electrons to those same tracks, so the railroad physical plant remained the same as the previous operating session other than a couple of repairs.    My restaging effort was modest for this session as it was to be “casual.”  I moved the Marcola Turn out of the Eugene Yard where it was left at the end of the last session and staged it in Springfield, ready to do its work.  Similarly, the Oakridge Turn was ready after a couple of key cars were added, so it, too, was moved out and over to Oakridge to start the new session.  Both of these actions cleared critical spaces in the Eugene classification yard, which helped a great deal.

Another bit of staging action was to move full trains to their appropriate staging yards.  This is necessary because the train composition of RR-West trains--lumber drags and mixed manifest freights--is quite different from the RR-East trains, still with mixed manifests, but the lumber empties are now solid blocks of lumber box cars and empty flats.

The first such train I needed to move from Eugene to Crescent Lake ran into a problem in the Eugene Arrival/Departure Yard reverse loop as I moved to turn it around.  About a third of the way into the loop track it started derailing.  Inspection found about ten inches of the outer rail had popped out of the Micro Engineering flex track to create wide track gauge.  I spent fifteen minutes spiking that rail into the correct position.  After that, the re-staging went very well.  What a joy to run trains on my own railroad! 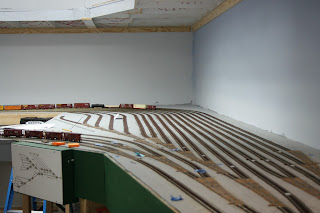 Eugene Arrival/Departure Yard.  Note there are now twelve loop tracks (on the right) and five widely-spaced tracks for the new diesel service facilities.   The new tracks have blue flags on them (blue painters tape) showing they are out of service yet.  Just beyond the caboose in the distance is the track where the outer rail popped out of its flex track spikes which required manual spiking by me to force it back into gauge.

With a modest crew size (not the “full” crew of twenty), operating jobs were parceled out amicably.  One “newbie” (welcome Rodger C!) was paired with an experienced operator (for my layout) for his initial runs, but otherwise we used single man crews.  Dave H. dispatched, releasing Rick K. to run one of the locals.  I should have insisted at least one other person help David B. in the Eugene Yard, but neither he nor the operating scheme suffered (much). 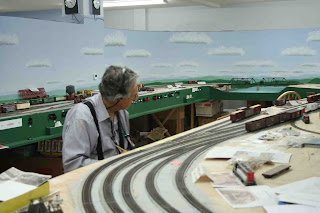 Rick K. works the First Springfield Switch Job, which services the depot side of the Springfield mainline. 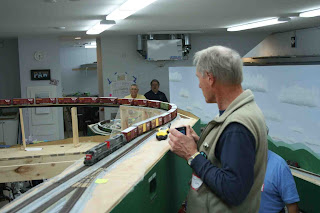 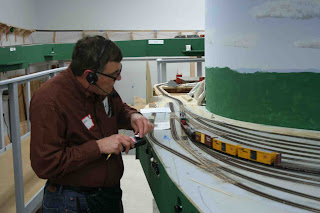 Norm A. finishes up work with the Oakridge Turn as he prepares to return to Eugene by way of Westfir and the other half of his work. 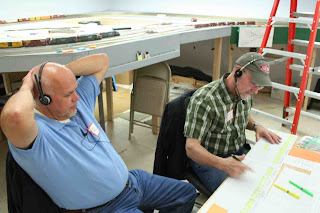 Dave H. serves as Dispatcher as Rick A. looks on.  Rick A. actually was studying the workflow and had a very useful suggestion at the end of the session.  I hope to see that play out within a couple of months. 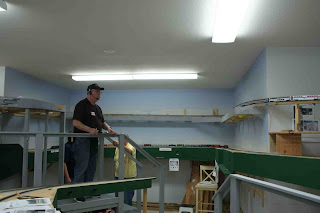 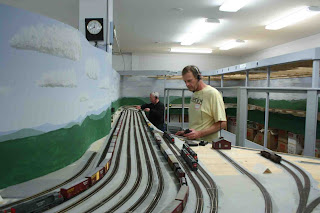 John B. (near) takes a break from his Crew Caller duties to serve as a helper engineer for the freight Mike B. (rear) has just brought into Oakridge. 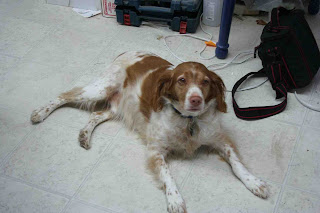 My faithful companion Phreddie takes it all in and wonders when the next treat will come his way!

Now that my railroad is settling into a monthly operating pattern, I need to develop a balance among construction projects, repairs, tweaks and tuning for operating glitches, staging and other organizational duties for operating sessions.  This “casual” session with a smaller crew composed mostly of my regulars helped bring much of that into focus.  I had sufficient time to brainstorm several ideas for operations organization with my regulars.