A BRICK WALL AT YEAR’s END

As we close out 2014, I can look back at a great deal accomplished on my HO-scale SP Cascade Line.  I got the middle core of the railroad into operation.  As expected, those operations pointed to a few track and rolling stock issues, but otherwise confirmed a sound foundation for the railroad.  Important as well was the development of the local freight operating scheme, in particular adding a second Springfield switcher.

With the operating core of the railroad settling into functionality, I began expanding beyond that core.  Roadbed and track was extended up from Oakridge to the first mountain siding (station) at McCredie Springs.  I also began the upper level over this area with Cascade Summit.  October and November saw a major milestone: construction and elevation of the roadbed panels for Crescent Lake.  The twelve-track staging yard in a reverse loop has been laid at Crescent Lake.  Construction literally is downhill from here.

I wish I could report great accomplishments for December.  Such is not the case.  Occasionally in the life of a project one hits a proverbial “brick wall.”  Such has been my case for the past month.  Between breaks for the holidays and family activities, I have made little visible progress.  Some of this has been “think time,” but much has been taking a break.

I did begin moving the mountain of moving and storage boxes from the basement east wall.  This will clear the way for roadbed for the mountain grade connecting McCredie Springs to Cascade Summit.  My lifetime accumulation of rolling stock does get in the way at times!  Slowing the box moving process is that I have been opening each box to confirm contents listed on the box ends.  Several interesting surprises greeted me with equipment I had lost track of. 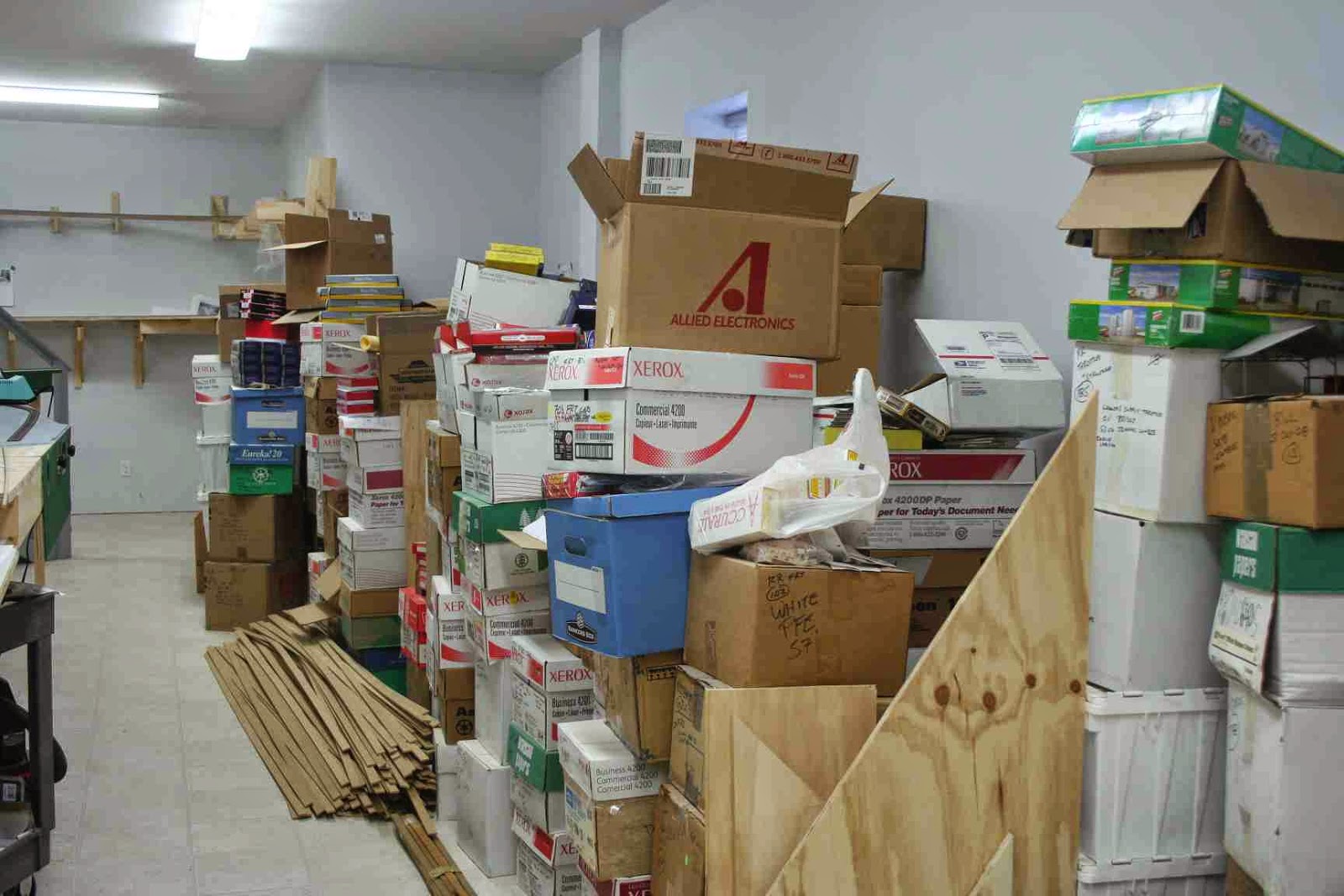 Boxing Day (December 26) along the basement east wall.  This is the area of the remaining mountain grade.

As we recover from various injuries and general exhaustion from the holidays, we wish all a Happy New Year!

August 2015 and the NMRA National Convention in Portland are approaching rapidly!
Posted by EspeeCascades at 4:34 PM 3 comments:

With track laid at Crescent Lake, I’ve taken a break from intense new layout construction.  Part of this was to focus on the Thanksgiving holiday and house guests.  Further, it was past time to address a track repair need and a long-delayed track improvement.

A long-delayed project was the addition of a spur track off the Oakridge wye to service the future sand house.  The test operating sessions used the primary sand track to provide service, but eventually this track will need to be kept open for helper locomotives being serviced.  Test fitting a #6 turnout showed I could add such a switch for a sand spur and still access the wye with at least a 36 inch minimum radius leg. 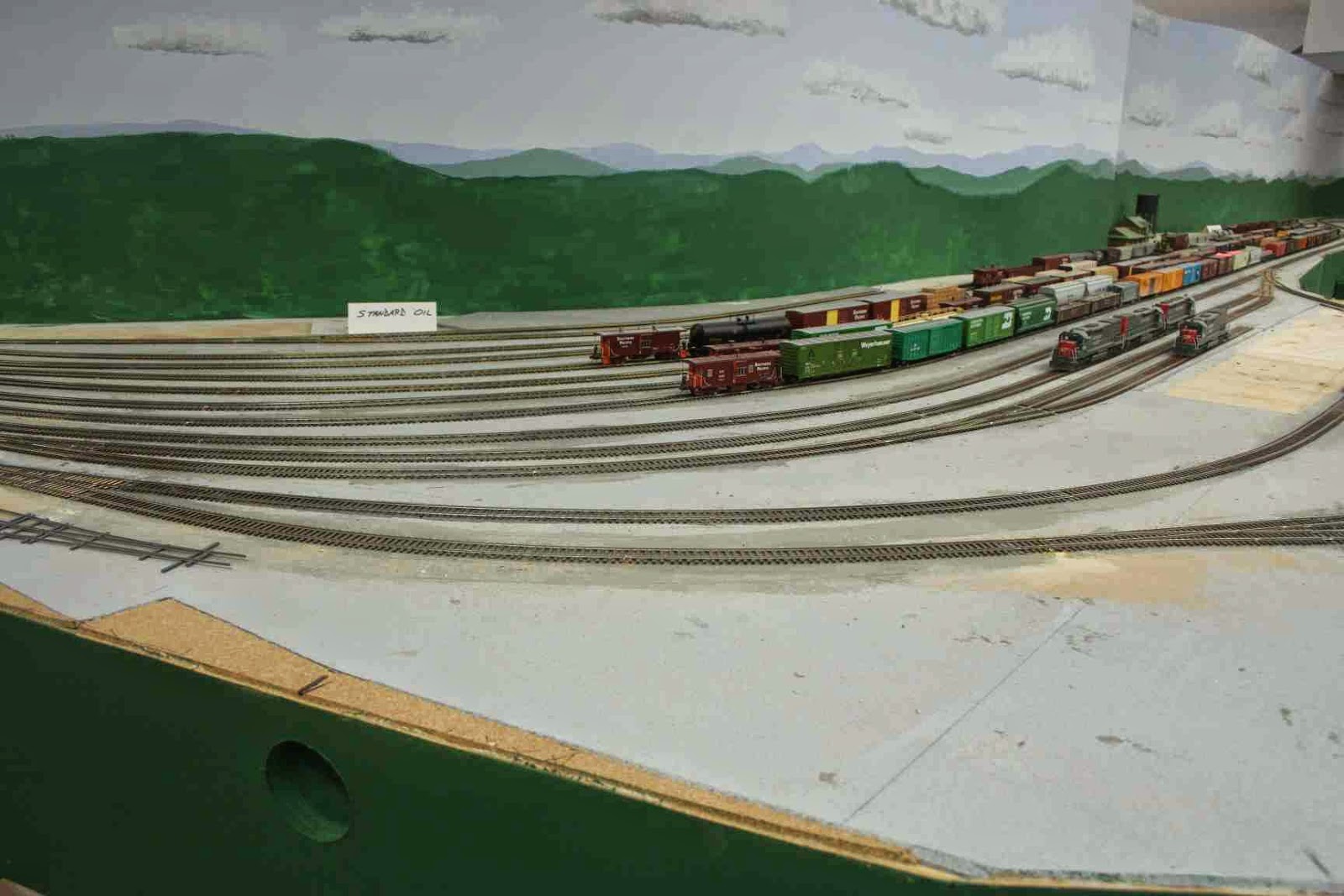 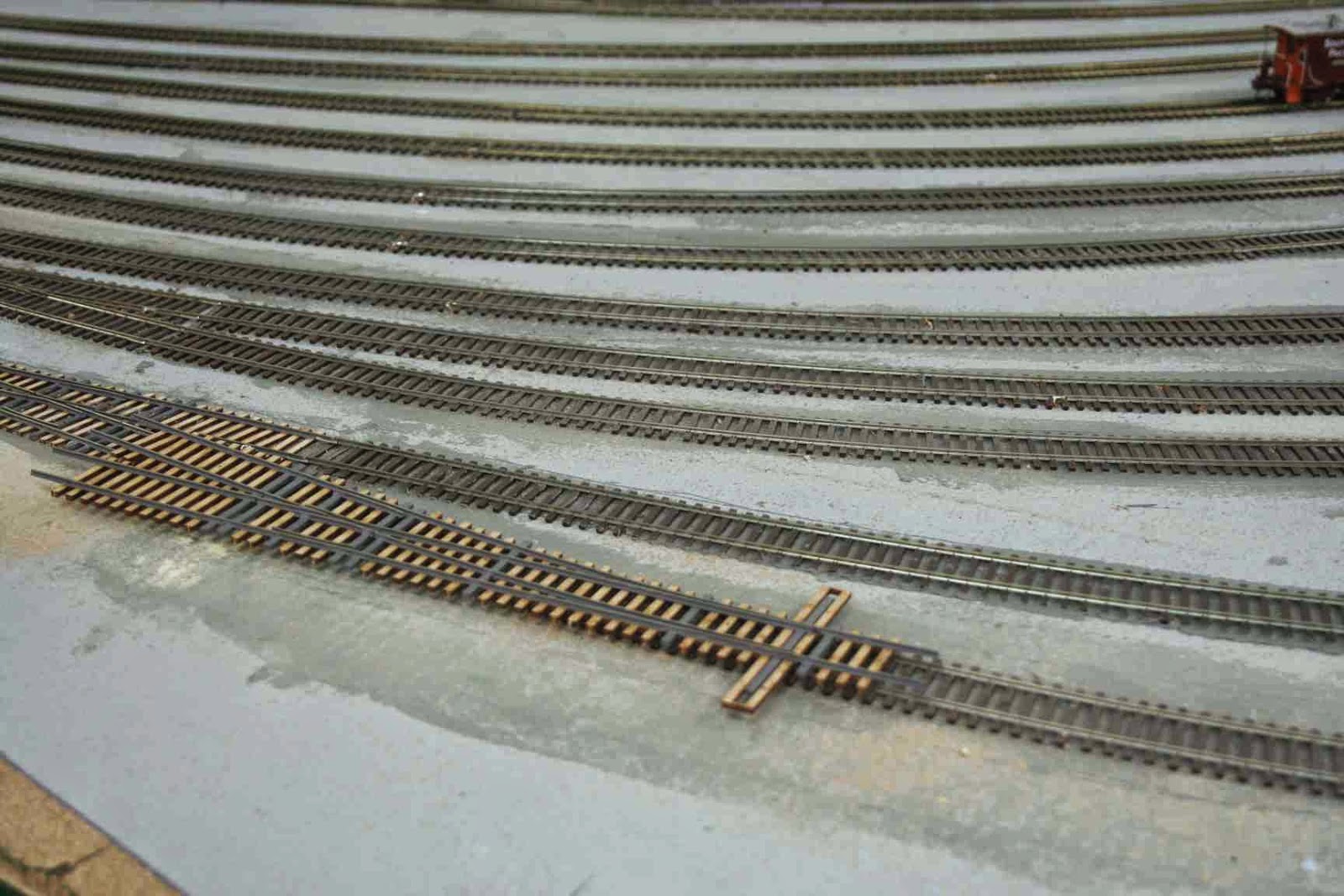 The former East Oakridge wye track was removed using a technique suggested by Jerry B. for the adhesive caulk.  Jerry discovered that an alcohol soaking softened the adhesive caulk making easy work of track removal and potential salvage.  My previous effort in the same area used just a putty knife.  This is the second time I have revised track in this area. Adding alcohol to the process made the task easier and made clean-up very much easier.  I was able to scrape the roadbed to remove the previous caulk.  This contrasted to the sanding operation used before. 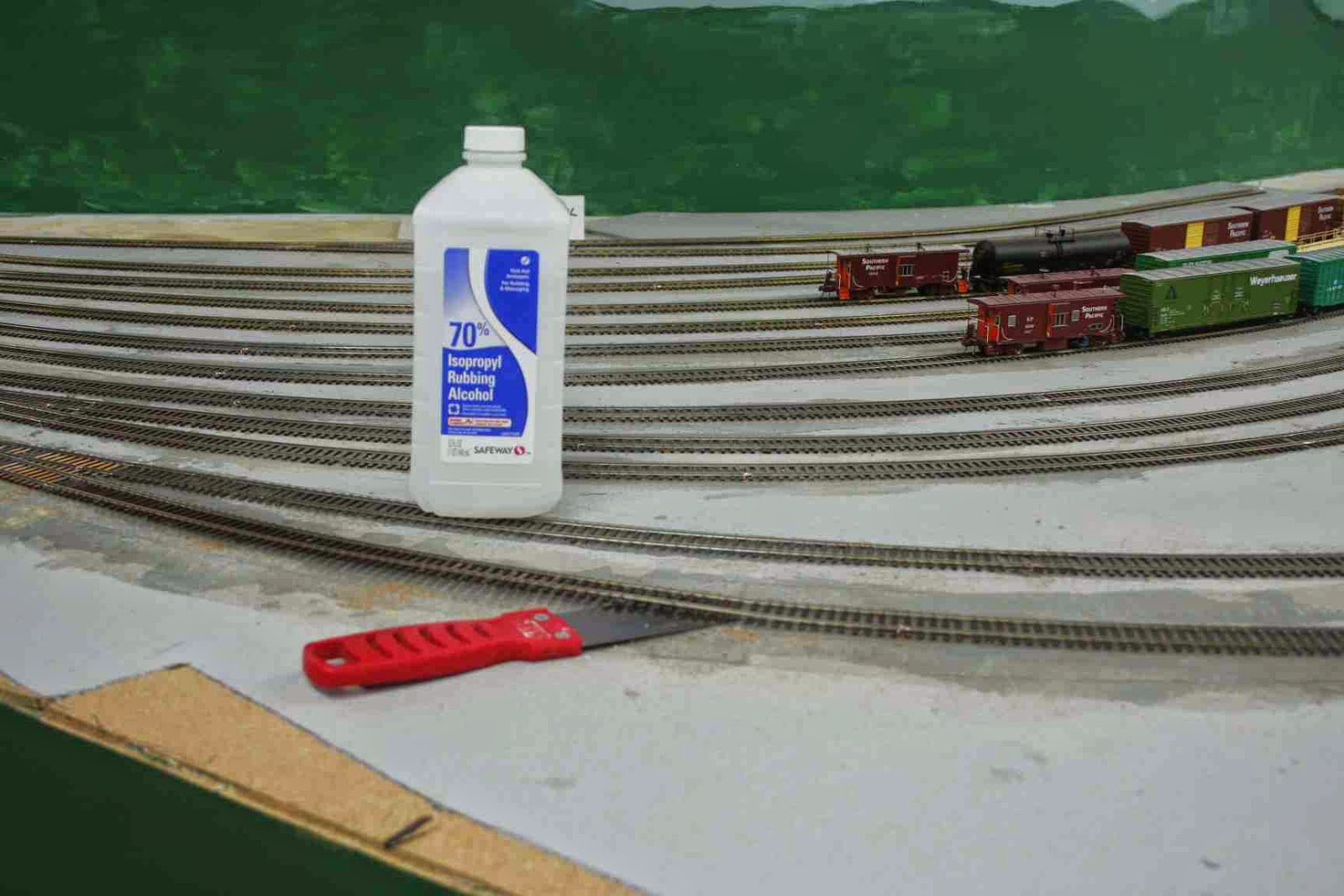 Removing the old track with a putty knife after soaking the area with alcohol. 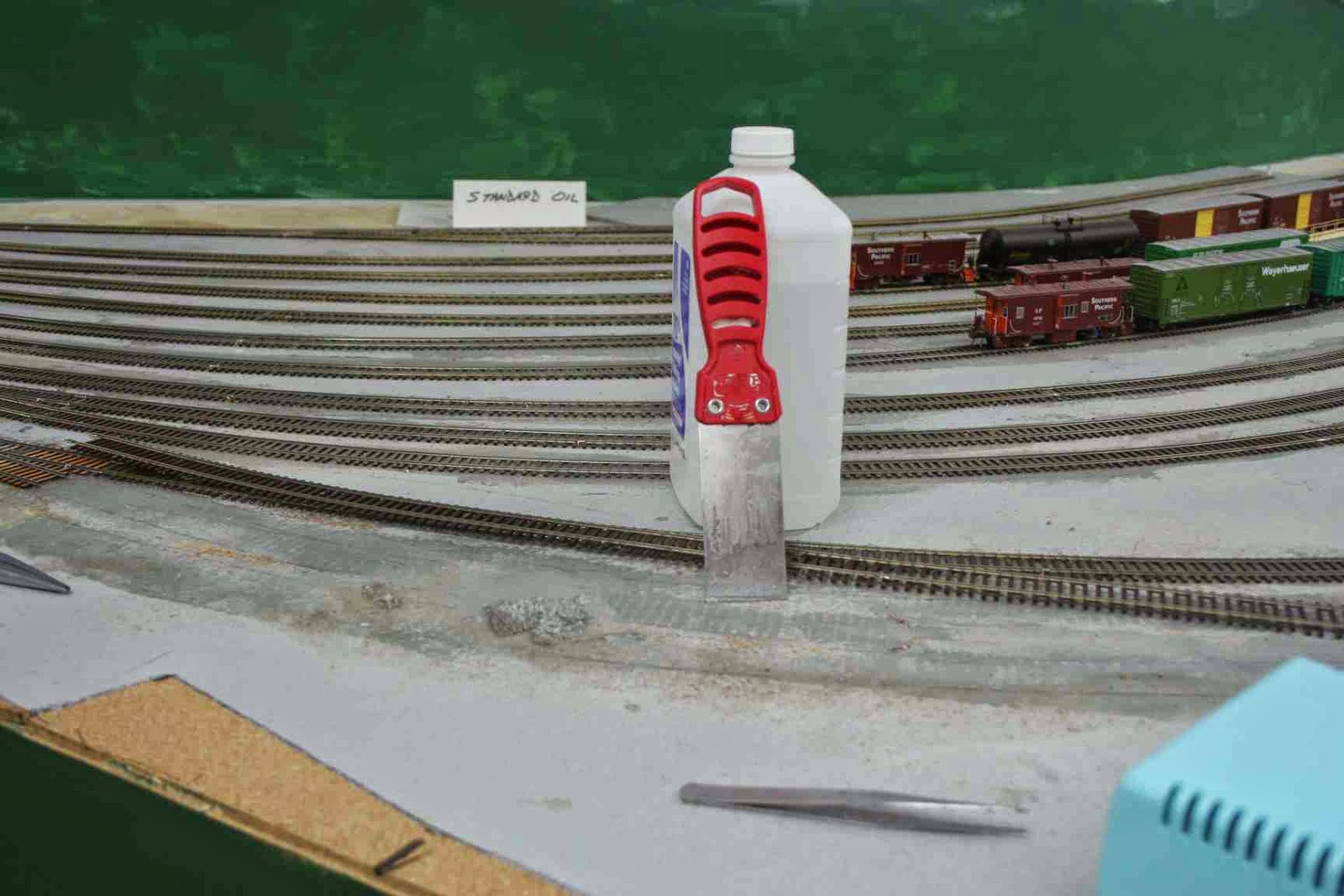 Track and caulk removed from RR-East leg of the Oakridge wye.  A small pile of scraped-up caulk is to the left of the putty knife.

The new #6 turnout was installed.  Once the caulk set for the turnout, the remainder of the wye track was formed and fit into place as well as the new spur.  Both of these were then permanently laid with the adhesive caulk. 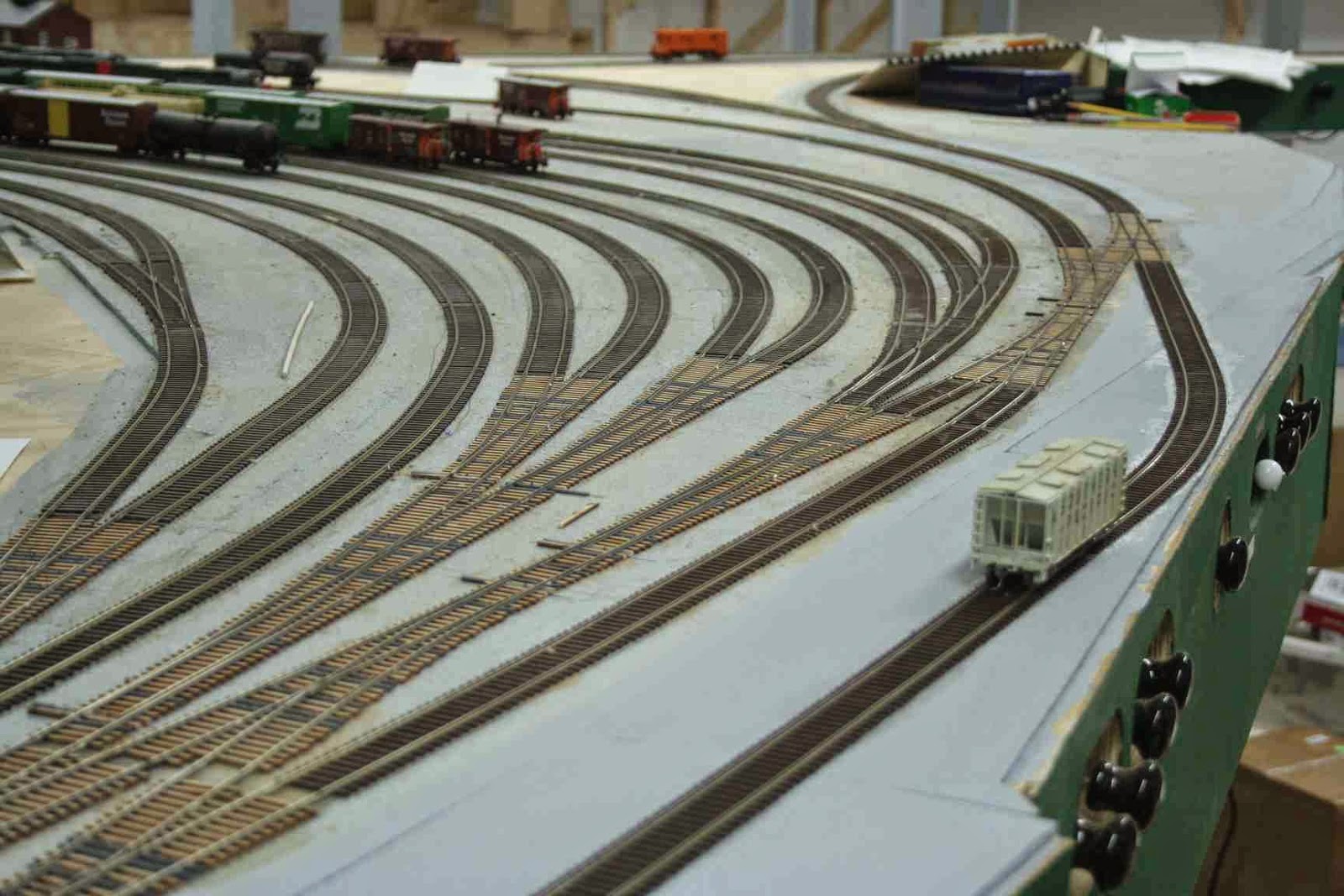 As I worked on the connecting roadbed and track between Cascade Summit and Crescent Lake, I ended up destroying a switch at the RR-East end of the Eugene Depot area immediately below.  I simply failed to cover with a hardboard or plywood overlay all of the track down below.  The result was a bent up switch leading to the depot main track. 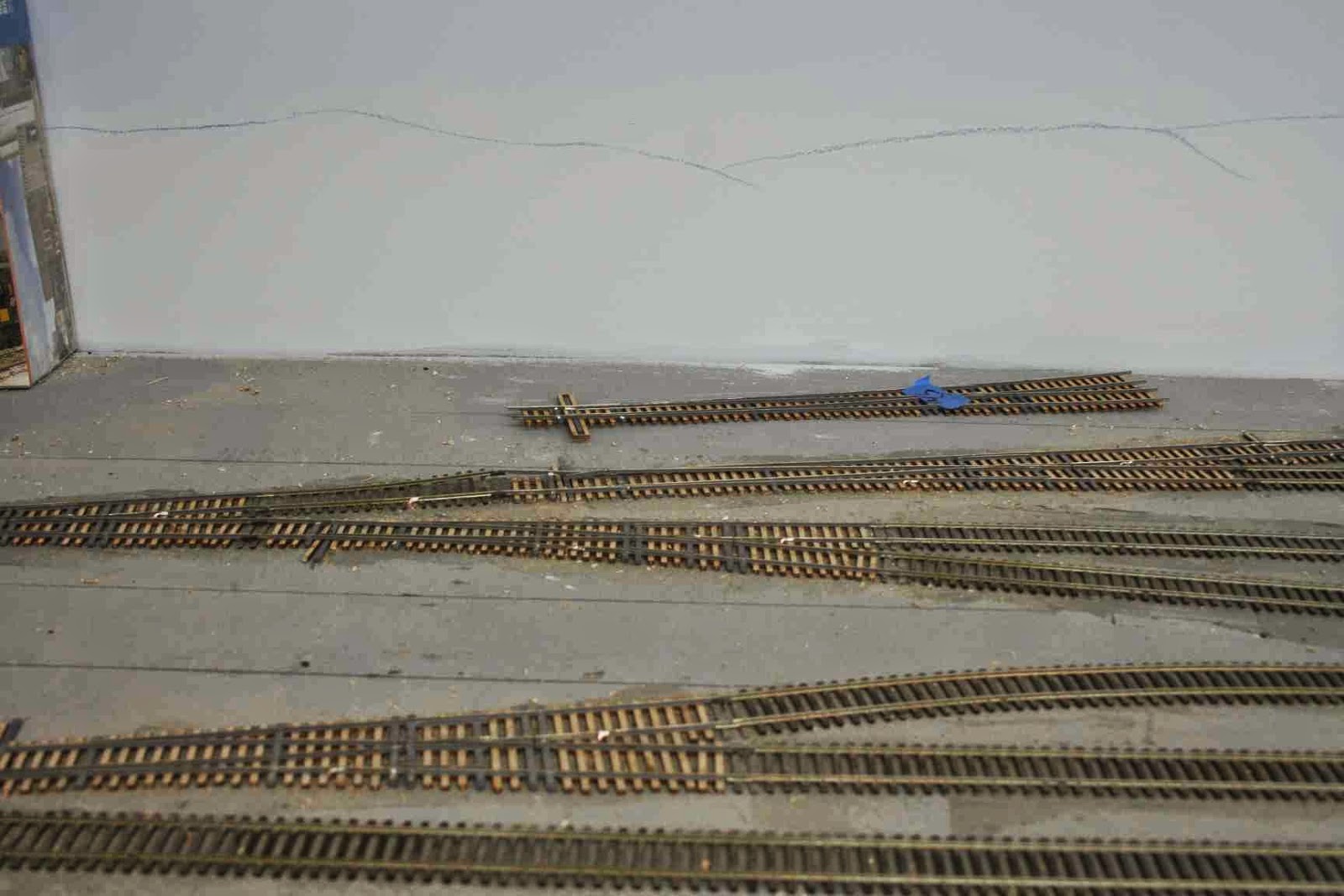 Replacing the bent switch employed the same process used to revise the RR-East Oakridge wye to provide the sand spur.  An alcohol soak was followed by lifting the old switch out with a putty knife.  The area was cleaned up and a new switch installed. 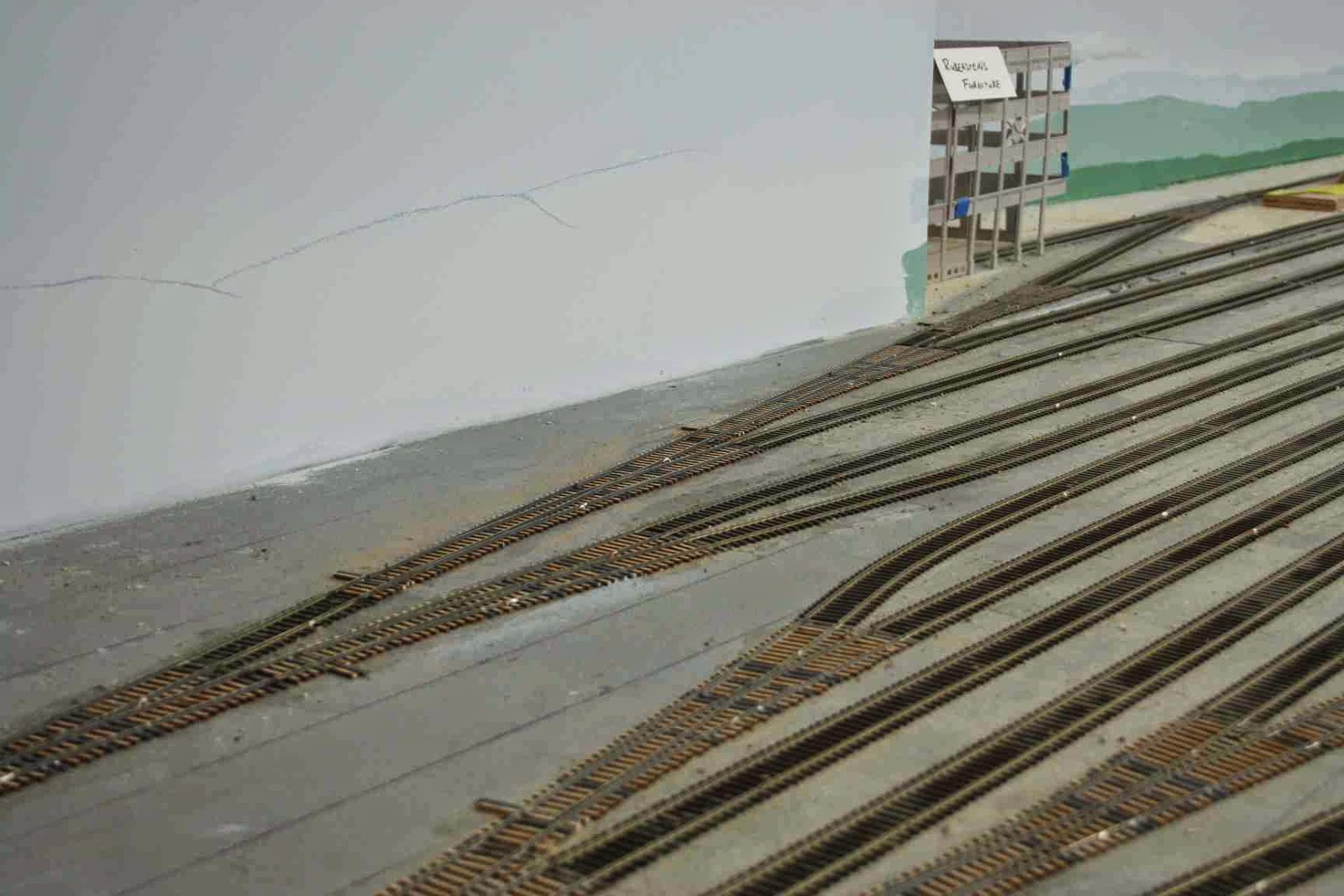 New switch installed in the switch ladder at the RR-East end of the Eugene Depot.
Posted by EspeeCascades at 12:35 PM 2 comments: