Winterail long has been THE premiere railroad photography and railroadiana show on the West Coast.  Indeed, it spawned a number of similar events around the country.  It features beautifully produced rail photography shows set to music and often with narration—very similar to what Ken Burns made popular on PBS with his Civil War series and later topics.

Winterail has long been held on the second Saturday of March in Stockton, CA.  Producer Vic Neves retired and left California this past year and located in the middle of the Willamette Valley.  Since no other Californians wanted to take on the production role and keep it in California, Winterail moved up here to Oregon with Vic.

This weekend, Winterail officially opened up in its new home at Corvallis High School, now on the third weekend of March to take advantage of Corvallis schools’ Spring Break.

I was delighted to return to regular attendance at Winterail as had been my practice while living in California.  I have known Vic Neves for decades and now operate with him on several local layouts—including my own SP Cascade Line.  It was great to renew friendships with the Winterail “Roadies,” as many of the regulars made the trek up from California to help Vic put on the event.

I also was delighted to see what had become of Corvallis High School, rebuilt, ca, 2005.  I am a CHS Spartan and alum from many decades ago.  I am proud to say the taxpayers of Corvallis have produced a beautiful facility to replace the hodge-podge of construction era (Great Depression WPA to 1960s) facilities I knew well.  Comments heard from my Oregon and California friends indicate they were impressed similarly.  The CHS facilities are a far cry from the aging facilities in Stockton.  My photos in this blog post suffer from hand-held in low light, but I think they still convey the event and venue. 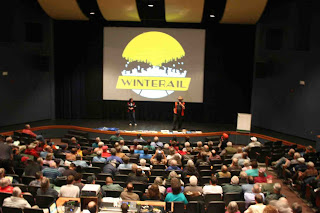 Vic and Annie Neves welcoming the crowd to Winterail in the Corvallis High School auditorium.  The facility seats 650 in roomy, comfortable seats. 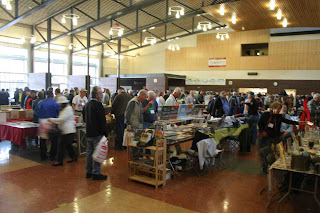 The photography shows are preceded (and in parallel) with a railroadina sale.  Aisles were ample so the crowd could linger with individual vendors without being jostled continuously. 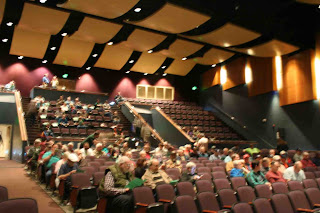 Another view of the auditorium, as the crowd began gathering for the first show.  No bad seats in the house!

Ticket sales were above 350 (preregistration).  I suspect those sales will grow much higher next year!

Posted by EspeeCascades at 3:49 PM No comments:

I continued to play “artist” by painting the basic backdrop for the mountain grade.  This totaled around 120 feet of wall length as I addressed both the long pair of walls for the grade plus the upper and lower lines in the McCredie Springs nook.  This is just basic backdrop with minimal detail, but it shows where I am headed on this area.

I began by “sketching in” the landform outline with gray paint.  This is the profile for the landform as it reaches the wall.  Next, I added the distant ridgeline to several locations.  Finally, I painted a deep green swath representing the nearby forest.   A feature of this color band is that its upper profile has a representation of Douglas Fir tree tops. 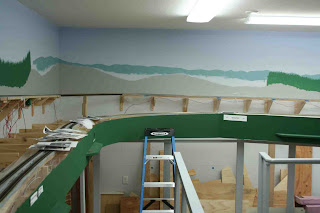 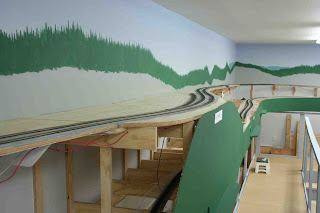 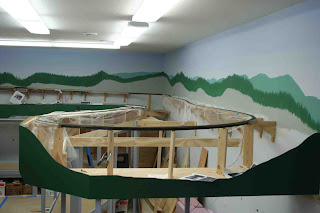 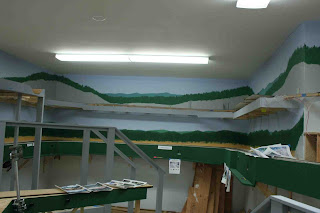 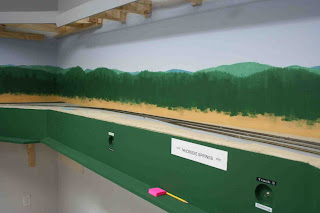 McCredie Springs backdrop.  I will add detail here, as most of this scene is fully against the backdrop. 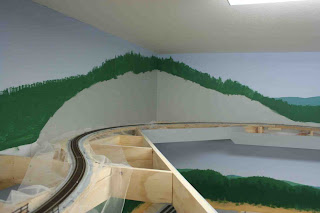 Though I am tempted to add artistic detail to the gray landform profile area, I will resist for now.  Once the landform is built (still deciding on technique), I may want the neutral gray on the wall under the scenery.  For now, I have transformed the space from bare walls and plywood to something representing the area through which the track climbs.  This is the Cascades!
Posted by EspeeCascades at 12:52 PM No comments: