Completing the manual switch links for the current railroad, I moved on to Oakridge.  As shown for Eugene (http://espeecascades.blogspot.com/2013/09/eugene-manual-switch-linkages-installed_29.html), fascia was installed, knob holes bored, backer plates installed and threaded rod installed for the switch links. 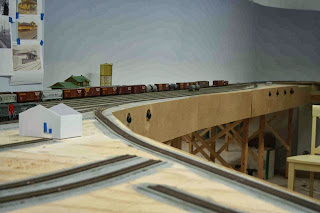 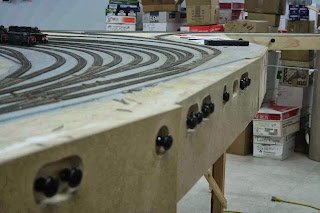 Manual switch link knobs in fascia at RR-East Oakridge.  Note knobs for switches at the wye tail are mounted directly to the layout structure—no fascia.

The pair of switches at the tail of the Oakridge wye required a bit different linkage.  The roadbed support for the wye tail is quite narrow.  This presented the opportunity and need for a linkage that works from both sides.  This was accomplished by passing the threaded rod used for the linkages through both sides of the layout support, passing through a bracket mounted to the Blue Point switch machine. 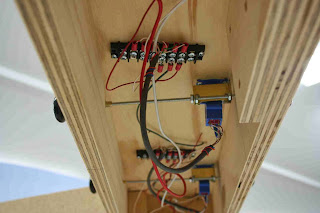 While I was installing knobs for the Oakridge switch links, I took the opportunity to change several of the knobs at Eugene to provide color coding.  The basic knobs are black, but the switches along the back of the Eugene depot area (most of them off the “WP Siding" in front of the depot) now have blue knobs.  Similarly, the RIP track and scale track switches now have red knobs.   The color coding helps differentiate these switches from the bulk of the yard switches. 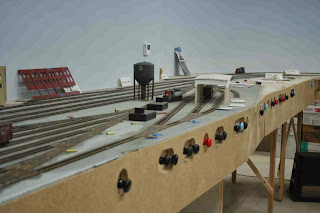 A Note on Blogging

Finally, a theme I find in common lately on several blogs I follow concerns the need for focus during layout construction, particularly for larger projects.  A blog can be a great way to force that focus to accomplish something tangible within a given period.

A blog can serve as a public project progress report—something I was quite familiar with in my NASA career.  I so appreciated other model railroaders’ blogs, that I resolved I would begin my own blog when I began construction of the dream layout.  I originally anticipated posting monthly, but found I could achieve a bi-weekly post, a pace I have maintained since construction began in August, 2012.

“Feeding” this blog has forced me to focus on several occasions, just to have something tangible to report.  As one fellow blogger notes, it is easy to get diverted into a variety of different tasks on a large project (layout), with none of them directly showing progress in a given period.  Those tasks are all necessary to the larger picture, but it remains important to keep making tangible progress, as well.

There will be occasions when one blog post looks a lot like some previous post.  Such might be the case with this current post on Oakridge switch linkages and the one a month ago on Eugene switch linkages.  Both report progress.  Each shows a slightly different aspect of the same overall task.  Repetition is in the nature of the task –it is needed for each station along the railroad.  Still, it does show how long it takes to work through the major building blocks of this project.  It was that sort of information I found so useful while planning this railroad to determine what was feasible.  I appreciated others posting on their efforts.  I hope I am returning the favor to other model railroaders contemplating layout construction.
Posted by EspeeCascades at 7:47 PM No comments:

The Southern Pacific Historical and Technical Society (SPH&TS: http://sphts.org/) held its annual convention in Fresno, CA, this year.  This has been a major annual event for my railroad hobby for over two decades now.  I sat on the fence about attending this one (What’s in Fresno? –grin), but ultimately decided it was the people connections at this event that now draw me to it.  I am glad I chose to attend!  Convention Chair Chuck Harmon and his crew put on a fine event with informative clinic presentations, an interesting railroad trek in the area (more below), and “the usual” convention activities.

The convention began with a trip out to the Hillcrest & Wahtoke 15” gauge railroad in Reedly, CA.  (http://hillcrestreedley.com/)  Over a mile of 15” gauge track winding through the remnants of a Christmas tree farm serves as the venue for this steam railroad.  Owners Sean and Melissa Bautista have built upon their railroad interest to provide a great local attraction and the shop to support it.  That shop now provides support to other large “ride-on/in” railroads, including a major entertainment and theme park empire.  Melissa was ever the gracious and informative hostess, making this a happy surprise for the convention. 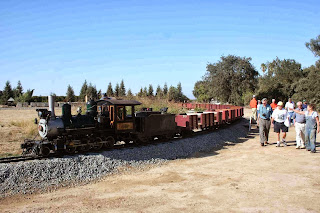 A fine set of clinics were presented on Thursday, Friday and Saturday.  Highlights for me included Mike Bording describing his initial duties as an Assistant Trainmaster at SP’s Fresno Yard, Joe Dale Morris providing a trip description up the Friant (Clovis) Branch, Tony Thompson on PFE Operations, and Dick Harley on modeling PFE steel ice reefers.  Dick has inspired me with PFE modeling tips through the years and was one of the first to provide me a technique for analyzing a car fleet for the most significant car classes—the ones that “need” to be modeled first.  Rob Leachman presented a double-length clinic on the UP/SP/PFE Salad Bowl Express/Fresh From the West service of the 1970’s.  Rob was part of the UP team that analyzed the traffic and proposed a service solution to resist the shift of the valuable produce trade from train to truck.  Though my SP Cascade Line is focused on the forest products industry, I remain mindful of the significance of Pacific Fruit Express operations to the SP’s bottom line.

I “stole” time Friday evening to take in a couple of local model railroad layouts.  The first was the Fresno O Scale Group, located in a light industry warehouse.  Hosted by John Ford, Dave Meyers and Jay Criswell, the group has created a great O-scale empire which they populated with mostly Southern Pacific equipment for our convention. 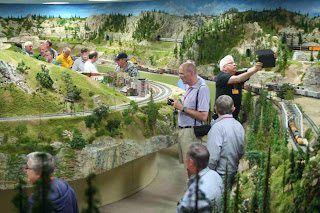 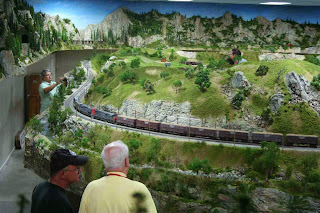 A pleasant surprise on this layout was a model of the Tilbury Cement reload that used to stand behind the Springfield, OR, depot.  I’ve been staring at the plans and modeling articles on this facility written by Harry Bonham in 1996 issues of “Railroad Model Craftsman.”  Ever since taking photos of the real facility in 1975, I’ve had an interest in modeling it.  It will appear in its rightful space in Springfield on my layout. 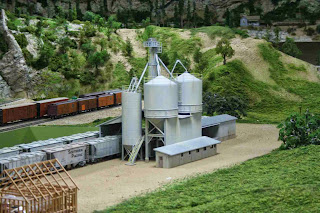 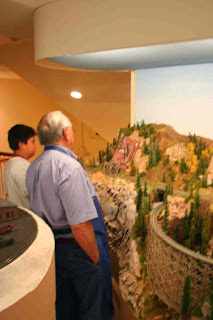 Boyd Cline and layout.  <Sorry for the picture movement in low light.>

During the SPH&TS convention, I renewed friendships, made new friends, and made important contacts for future efforts on my SP Cascade Line.  I’m glad I made the trek to Fresno!  Next year’s convention returns to San Luis Obispo, CA.  We’re eager to attend!
Posted by EspeeCascades at 12:06 PM No comments: