My re-work of the track at East Eugene finally has reached a workable state.  This project has drawn out far too long with many frustrations and challenges.  At every turn it seems this project found new ways to frustrate me--all the way up to the current state of a working control panel with most of its route indicators illuminated.

To recap, this track project added a second main track connecting between the WP Siding in front of the Eugene Depot to the departure side of the Arrival-Departure (A/D) Yard in the "back room."  Five double slip switches were needed to accomplish the desired routing options in a modest distance.  Previous posts in this series are:

This final post deals with the new control panel to control the switches at the RR-East end of the Eugene Depot trackage.

I built a new control panel for the new switch controls.  The current panel is deemed the "interim" panel as it uses toggle switches to control the switch machines and set the routes through this trackage.  The long-term, permanent panel will use push-buttons to control routes in and out of this area (N-X control), but the electronics to support that are a future project.  For now, a tower operator will need to select the routes with the toggle switches which are augmented with LED route indicators. 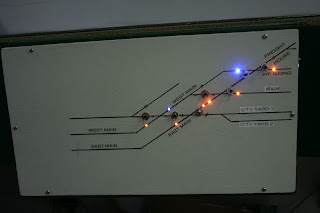 Two of the routes represent cross-overs between the two main tracks.  I was able to economize on switches by controlling the switch machines on either end of the cross-over with the same toggle switch, located in the middle of the track diagram segments.  Other toggles control routes away from one of the two main tracks and are located in the open space between the two panel lines for the routes controlled.

Double slip switches are known as "puzzle switches" for good reason.  One can easily get confused as to which route is selected.  The switch points on one side of the switch control the route on the other side.  Even knowing that, it was easy to get confused as to which switch machine controlled what.  Suffice it to say I am glad this is an "interim panel," as I had to redo one cross-over toggle switch arrangement--with attendant multiple holes for toggle switches drilled and then plugged again.

I added LED route indicators to help operators set up a route through the "plant."  I wired up pairs of LEDs with a single resistor to control the electrical current through them.  Helping me with the wiring was a "third hand" fixture which held two wire ends together as I soldered them.  The clips also served as heat sinks, allowing me to protect the heat shrink tubing I eventually slid over the joints while I soldered the connection.  Electronics folk are permitted to laugh at my late tumbling to the utility of this device. 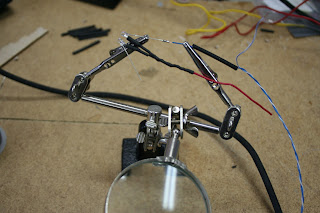 Soldering LED connections with the aid of a "third hand" fixture.

After making the switch machine control connections to the toggle switches, I turned to the LED indicators.  Yet one more frustrating challenge emerged as I discovered two of my switch machines were not controlling their electrical switching function on one set of secondary contacts.  The first set controls the turnout frog power. The second set is used for the LED indicators.  The secondary set on two machines did not function.  That led to yet another excursion underneath the layout to replace those machines.  I then worked through each of the LED controls and eventually found the right switch machine contact set for each LED pair.  I left a couple of the LED pairs unconnected for now.  In one case the turnout has not been built or installed yet.  In another case I need to add an additional set of connecting wires for the LEDs.  With an operating session coming soon (at last!) I deferred this to a latter day. 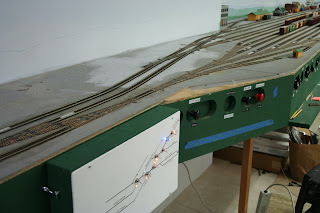 I declare this battle won!  The proof will be when operators other than me wrestle with route selection.

Posted by EspeeCascades at 7:03 PM