As we moved into the Fall and Winter, I faced a period of shut-down on my railroad.  Poor weather precludes using our back patio as a safe gathering place and relief valve where masks can be removed while maintaining distance.  With a long period without operating sessions, I can tackle larger projects that would otherwise disrupt the railroad.  Such is the case with the long-planned rework of the track arrangement at the RR-East end of the Eugene Depot aimed at extending a second track from the depot into the arrival-departure yard.

The Eugene Depot track rework was suggested to me by two of my retired SP railroaders at the first full operating session back in June 2015.  In a flash, their comments revealed to me the importance of two tracks running the full length of the Eugene yard complex, something I had missed in well over a decade of staring at the yard track diagram drawn by Ed Austin in his and Tom Dill's The Southern Pacific in Oregon, Pacific Fast Mail, Edmonds, Washington, 1987.  Two tracks with suitable cross-overs kept the terminal fluid from the RR-West switch at the depot north to Irving at the RR-East end of the Eugene Yard.  I planned and built my railroad to neck back down to a single main track at the RR-East end of the depot before arriving at the throat switch for my reverse loop staging which serves as the arrival-departure yard.

While I recognized the need to "extend the WP Siding" as Tom Dill so simply put it, the solution required complex track-work.  Whatever I did needed to fit within tight geometry created by the original track plan and construction.  I very quickly settled on a plan involving double slip switches.  I already had a short section of two tracks around the reverse loop throat switch, but I needed to deal with track and switches that were part of the Eugene Depot complex.

My initial plan would use FastTracks turnout construction fixtures just as most of the simple turnouts on my railroad have.  I eventually discovered that my intended use of Number 8 double slips to replace existing simple Number 8s that were in the mainline tracks in this area would not work.  That size double slip is a lot more complex than simply multiple sets of points and frogs.  When I understood that, I began looking at commercial double slip switches.  I finally settled on Peco SL-U8363 #6 Double Slip switches.  As I worked with these sharper crossing-angle (#6 vs #8 frogs), I found my original track-laying was sufficiently imprecise to adapt to the Number 6 frog angle.  My "prototype" (first use) installation was with a single double slip switch installed into the departure end of the arrival-departure yard.  That was documented this summer in my post: https://espeecascades.blogspot.com/2020/07/eugene-arrival-departure-yard-track.html

That installation established access to all twelve A-D Yard tracks instead of the original design which accessed only the outer five tracks.

The three small group gatherings and operating sessions I held this summer tested that initial double slip switch installation.  That was a critical milestone.  I long ago learned that one cannot proof read one's own writing nor properly test a new creation such as track-work.  With that test successfully passed, it was time to schedule the actual track installation.

The actual track re-work proceeded fairly quickly in October following my third and last small group session.  I removed the old track and switch machines and cleaned up the roadbed, including filling throw-bar slots.  Five switches came out, including one that access a future industrial area.  The new track went in fairly smoothly although I had undercounted the number of double slip switches I needed.  They were out of stock at the usual suppliers, but a quick internet search yielded one from Yankee Dabbler: https://yankeedabbler.com/  Their service was excellent.  I also found I was running out of Code 83 track and was able to obtain a bundle of the required Micro Engineering flex track from a favorite Portland hobby shop, Hobby Smith:

https://www.hobbysmith.com/.  In both cases, I paid for express shipping as I already removed the old track.  My railroad was un-runnable! 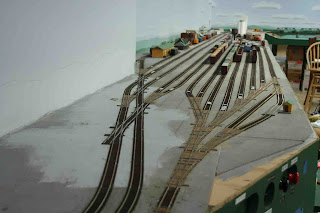 Revised track for the RR-East end of the Eugene Depot.  The track on the left in the foreground was added, extending the WP Siding which is the track closest to the depot, seen in the distance.  Common to SP practice, the official mainline track is at least one track over from the depot.  I need to add the passenger platform and walk-overs at the depot.  Also seen is the now straight-through track path from the pair of "City Yard" tracks (to the right of the WP Siding and Main) that accesses the to-be-developed industrial area in the lower left.

With the track arranged and throw-bar slots cut, I moved on to installing Tortoise (by Circuitron) switch machines.  "Murphy's Law" was in full force as I discovered two of the throw-bar slots were alongside bench-work stringers.  I had very little margin to work with as the switch positions were fixed by the tracks they connected to.  Fortunately, I was able to cut the throw-bar slots just beyond the underlying stringers by careful selection of which throw-bar hole I would use.  I bent an additional jog in the throw rods for those two switch machines, providing a little more room for the machines away from the bench-work stringers.

At this point I should note why this project has taken so long.  After all, I rapidly installed many more switches and switch machines in short time during my original layout construction.  First, I am five or six years older than I was then.  It is remarkable what the impact has been on my flexibility in that time.  This was compounded by needing to work in very tight quarters.  That photo above of the track-work should give a hint.  The backdrop is the basement wall.  Another factor that took a while to recognize its impact was the cataract eye surgery I had a year ago.  When I did the major layout construction, my nearly life-long near-sightedness led to my removing glasses for under-layout wiring and finding everything within arm-reach was in focus.  Now I need reading glasses or other vision aids in that range.  It took a while to find the right focal correction for this work underneath. 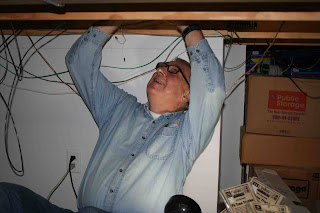 Sitting on the floor, working on layout wiring for the new track.  I am wearing the 2.0 diopter correction glasses I eventually found were required for this work.

This project has drawn out for a very long time, totally consuming my focus and whatever energy I could muster throughout the Fall.  The next major step involves running cables back from the nine switch machines in the current installation to a new control panel that muct be designed and built.  Eventually, the panel will be converted to route-control push-buttons, but the toggle switches plus LED route indicators I pioneered on the first double slip switch installation will have to suffice for a while.

Posted by EspeeCascades at 6:53 PM