Beginning in June 2015, I have hosted nearly monthly formal operating sessions and have now reached sixty sessions.  The operating scheme has developed through the years with input from crew members, especially several retired railroaders who worked on the line that I model.  Regardless of source, those crew inputs have nudged me along to a system that fits both me and the regular crew.

Most of the ops sessions have been for my regular local area crew, but a number of them, starting with Session Four for the PDX2015 NMRA National Convention in Portland, have featured “Boomer” crews—operators from far afield.  We are gearing up for another biannual regional operating event in June, so the next several operating sessions will be used to prompt and test enhancements.

Formal Operating Session Sixty featured a large crew of nineteen.  Three of those operators were either new to the layout or had been part of the crew only once before with a significant time lapse in between.  With a large crew, it was easy to pair each of the (relative) “newbies” with a regular crew member to mentor them into the particulars of my operation.  The large crew number also returns my operating sessions to pre-pandemic levels.  I am now bumping up against a desired crew size cap—a welcome “problem” to have!

Follow along in photos as the crew moved traffic in the (model) Cascades of Oregon. 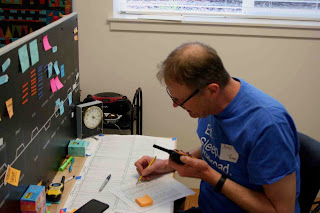 Dispatcher John B. returned to “the big chair” to serve as ringleader for this event. 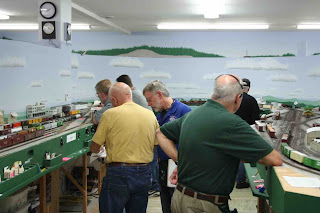 As usual, the Eugene-Springfield area was a hub of activity.  Eugene Yardmaster Rick A. (yellow shirt) confers with Jeroen G. about a road freight movement within the Eugene terminal area while switch crews work in both Eugene (left) and Springfield (right). 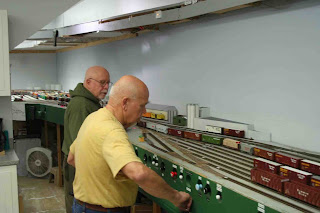 Yardmaster Rick A. and East Switcher Mark K. work the RR-East end of the Eugene depot area and classification yard in the foreground. 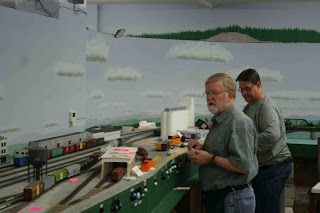 West Switcher Joe B. and Eugene City Switcher Mike L. work at the other end of the depot and classification yard. 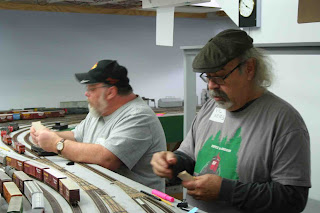 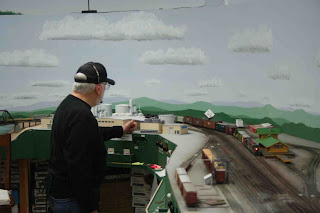 Craig P. pulls his local freight into Springfield, ready to work tracks on the depot side of the mainline.  This is the first of three locals serving Springfield area industry. 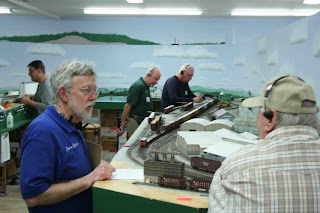 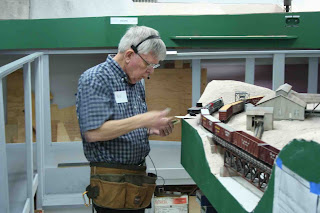 Bill M. drew the returning (to Eugene) Oakridge Turn, seen arriving from Oakridge at Westfir.  Bill will switch the sawmill here before returning to Eugene.  The Dispatcher must find or create a “hole” in the normal flow of mainline traffic for the Oakridge Turn to work Westfir.  The single-track mainline becomes blocked by the Turn’s work here. 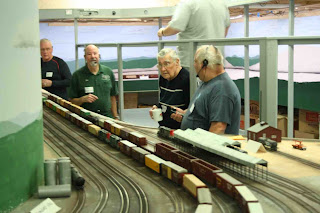 Earlier, at the start of the operating session, the Oakridge Turn sits on Track-4 while a RR-West train has its helper inserted and prepares to climb the Cascade grade from Track-2.  The road crew composed of Joe S. and Jim L. are at the RR-West end of Oakridge while helper engineers Dave C. and Mike R. are closer to the camera and the engine service facilities. 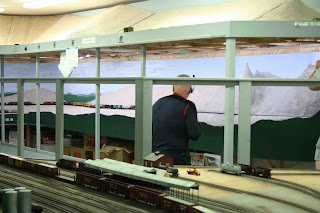 The RR-West freight has started its Cascade climb and is approaching Montieth Rock (aka “Rooster Rock”), the rock spires under the overhang in the right-distance. 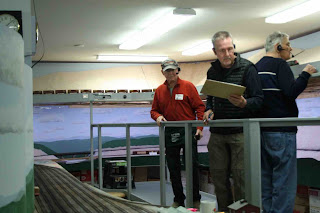 Road Crew John K. and Dave H. have gotten their RR-West train up to Cascade Summit and are moving around the layout space to Crescent Lake to tie up in that upper staging yard.  Helper engineer Dave C. is preparing to return with his light helpers (locos only) to Oakridge. 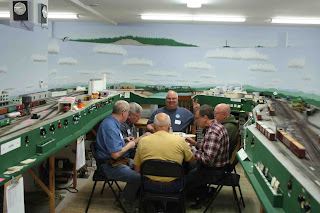 A regular feature of my formal operating sessions is a mid-session lunch break.  Winter weather chases us indoors, finding places in the layout space to squeeze in a table and chairs for lunch.  Conducting the lunch break on site maintains the social activity and focus with minimum disruption to the overall operation.

A formal operating session runs about twelve “fast-hours” using a 3:1 fast clock ratio.  This session began before “midnight and ran unto about “noon” of the next day.  Early in the session three successive “T” trains (nominally trains with priority trailer-on-flatcar traffic) ran RR-Westbound out of Eugene on one-hour headways.  After that fleet passed over the railroad, the traffic settled down with more relaxed operations.  The crew had a good time and this session generated only a few “fix-its”—a success!

Posted by EspeeCascades at 7:17 PM