THE RAILROAD AT YEAR TEN—A DECADE!

THE RAILROAD AT YEAR TEN—A DECADE!

August 1 marks the anniversary of the start of construction for my SP Cascade Line.  It is now ten years since I began this construction and operations adventure.  I do an annual photo survey of the railroad at the beginning of August each year to document my progress.  Last year’s photo survey may be found at:  https://espeecascades.blogspot.com/2021/08/the-railroad-at-year-nine.html  From there, one can work back through the years to the beginning in 2012.

This past year’s effort was that of consolidation following the installation of the long-awaited second main line between the Eugene Arrival-Departure Yard and the Eugene Depot area.  Structures were the theme.  That new main line track fixed the space available alongside it for industry.  I succeeded in filling the six new industrial spurs with structures before activating service to those spurs--no folded index card signs this time around!  I also completed construction of the Springfield depot using a recent laser-cut kit produced for the Southern Pacific Historical and Technical Society.

This year we will follow an RVEUY (Roseville to Eugene manifest freight) as it treks over the railroad from Crescent Lake to Eugene.  This is a RR-Eastbound move as it is away from corporate headquarters in San Francsico. 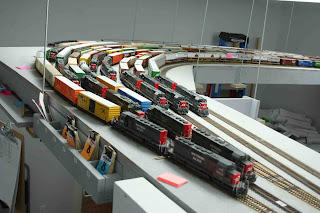 SP 7308 East begins its journey over the Cascade Subdivision of the Oregon Division as it leaves Crescent Lake.  This twelve-track reverse-loop staging yard represents the RR-West (geographic south) end of my railroad.  The yard is laid on panels suspended from the ceiling. 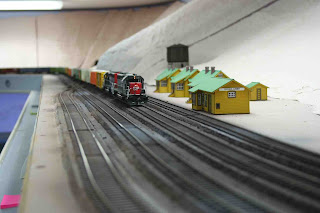 SP 7308 E rolls through Cascade Summit.  No need to stop here, as our locomotive units are in good shape, especially their dynamic brakes. 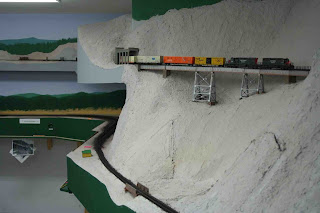 Winding our way down-hill through tunnels and rock sheds, we cross the first of three large steel viaducts at Shady Creek.  This scene also shows McCredie Springs on the lower deck, separated by about 2.5 feet of elevation.  Total railhead climb on my model railroad is a bit over three feet. 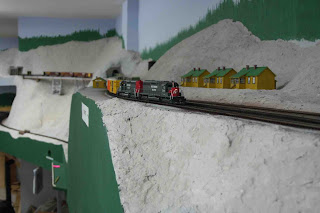 After the Shady Creek trestle, we roll through Cruzatte.  In days of steam power, this was a mandatory wheel cooling stop as light brake-shoe pressure was set at the summit.  With dynamic brakes we do not need to set those brake-shoe retainers so we keep moving. 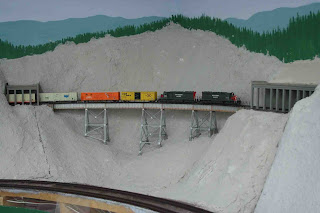 Perched between two tunnels and rock sheds, Noisy Creek is the second of the large steel viaducts on the line. 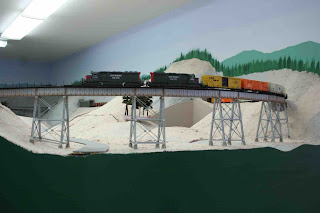 Salt Creek Trestle is the third, longest and final of the large steel viaducts we cross on our way downhill.  This trestle crosses both Salt Creek and Oregon Highway 58—the Willamette Pass Highway, 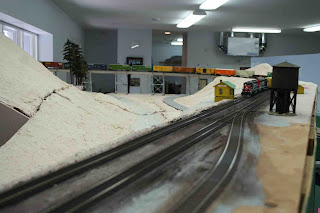 After crossing Salt Creek Trestle, my railroad rolls through Wicopee.  I had to compromise during layout design to put the trestle on the opposite side of this important siding.  Wicopee is the mid-point in the climb up from Oakridge to the summit.  It was a habitual water stop with steam locomotives.  It still has an active water tower to support forest fire fighting. 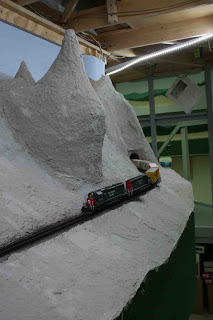 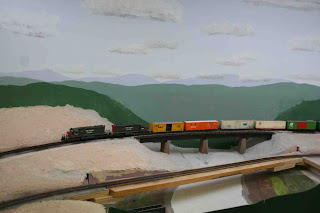 Salmon Creek is just outside Oakridge.  The track on a temporary “bridge” in the foreground leads to the Pope and Talbot mill on the geographic east side of Oakridge. 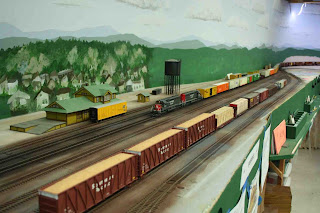 SP 7308 E continues to roll through Oakridge.  Oakridge was the historic steam helper station at the base of the climb up over the Cascades.  While the SP closed it down when steam was replaced by diesels, I retain it as my helper station.  The rear of the Oakridge Turn local freight train is in the foreground.  This tends to be a big train as it serves the two big sawmills that bracket Oakridge:  Pope and Talbot and the former Western Lumber at Westfir.  We see the Pope and Talbot loads at the rear of the train. 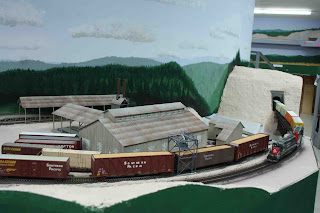 Our train crosses the North Fork of the Willamette River as it exits Tunnel 22 from Oakridge and enters Westfir.  The former Western Lumber Company mill was owned by the Edward Hines Company in its final years of operation. 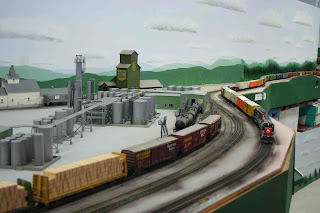 SP 7308 E swings around industry on a branch on the geographic east side of Springfield.  The old agricultural business is being replaced by forest products industries such as Neste Resins (now Arclin). 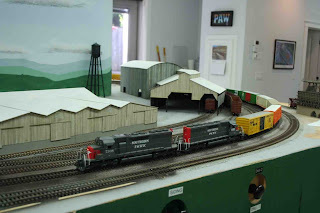 Continuing into Springfield, we pass the large Rosboro Lumber mill, still very much active.  I had to selectively compress my models of prominent structures of the mill complex. 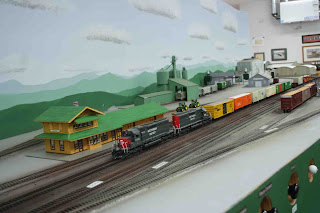 SP 7308 E continues to roll through Springfield past the Springfield Depot.  The delightful Queen Anne style depot has been moved and preserved to serve the Springfield Chamber of Commerce.  I was delighted when the SPH&TS produced a kit for this depot plan—the second most common depot plan on the SP. 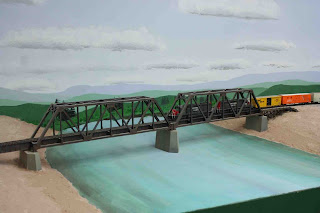 We cross the Willamette River on our way from Springfield into Eugene. 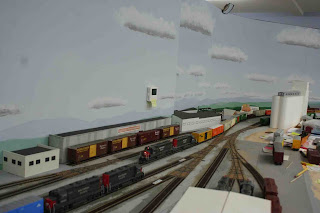 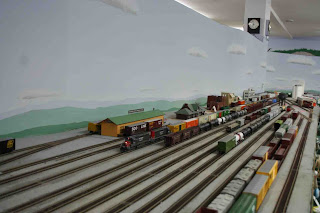 SP 7308 E passes the Eugene depot and freight depot.  The passenger depot remains in service for Amtrak.  My layout planning led to placing my classification yard in front of the depot scene.  This yard serves the industry physically modeled on my railroad.  It is very similar in function and size to the Bailey Street yard which was the original yard at Eugene, before the large hump yard was built along the mainline with construction of the Natron Cutoff (toady’s Cascade Line) in 1926. 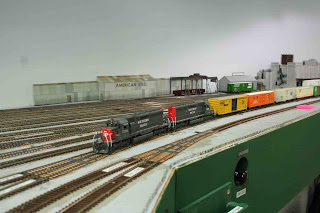 SP 7308 E completes its trek over the Cascade Subdivision as it rolls into the Eugene Arrival-Departure Yard.  Seen in the background are some of the new industry structures completed as part of the track project in this area over the past couple of years.

I hosted nine formal operating sessions and two small group sessions this past year, returning the railroad to its intended purpose.  The crews have been smaller than those of years past as everyone is more cautious and selective about activities.  Still, we have managed to enjoy the hobby!

Posted by EspeeCascades at 2:24 PM