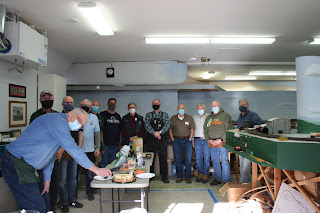 Cutting the celebratory cake for my fiftieth full operating session.

Recounting how far I and my operating crew have come, the first test operations with more than myself took place on March 1, 2014.  Three of the four operators (other than myself) for that session were here for this fiftieth session.  That test operations ran from the Eugene Depot and classification yard through Springfield to Oakridge.  That was the extent of the mainline at that point.

During that first test session, the Springfield Turn returned to Eugene with 28 cars.  That was way more than I expected for a local and was beyond the nominal design train length of a bit over 25 fifty-foot car plus power and caboose.  That immediately led splitting Springfield local services into two separate local turns.  A third Springfield area local was created for the Marcola Branch.  This pattern continues to today.  The fiftieth full session featured the “Springfield-B Turn” as the local serving that area.

were occupied by adding more tracks in the Eugene Arrival-Departure Yard and tidying up other details.  Once again, my original four test crew members were present as well as eight more.  Significantly added to the June 6 crew were three former Southern Pacific railroaders, from whom I learned a great deal.  Two of them came to me during that session noting I needed to “extend the WP Siding” into the Arrival-Departure Yard at Eugene.  That task finally was accomplished this past year as I dealt with the complex track-work (five double-slip switches!) and wiring.

The fourth full operating session on my railroad was conducted on August 25, 2015 as part of the Operations Special Interest Group activities for the PDX2015 NMRA national convention in Portland.  Although my anxiety was high in advance of that session, the raw railroad performed well enough.  Helping that feeling was an experienced boomer crew of visitors from afar, half of whom were my former weekly lunch-mates from my working life near San Jose, CA.  I just made that deadline!

Since then, I have conducted nearly monthly operating sessions.  Our greater Portland area operating crew agreement has me taking the First Saturday slot.  That automatically eliminates July and September due to holidays.  This year I had to deal with the start of the new year, but I was able to slip a week to today’s session.

The lock-downs of the past two years seriously delayed my reaching the fifty-session milestone, but we have figured out how to live with restrictions and health advice while still gathering to operate.  Viable vaccines proved a critical component, with all present being vaccine-effective.  A key adaptation has been reducing the crew size to as small as we can while still performing the normal required tasks.  The fiftieth session drew a crew of only ten, with several others dropping out in the preceding week with cold symptoms or other activities sprouting up with priority.  We had just enough crew to get the job done.  Thanks to the current health crisis, I have now tested the lower bounds of design crew size and found those design criteria were valid.

I look forward to many more operating sessions!

Posted by EspeeCascades at 7:59 PM