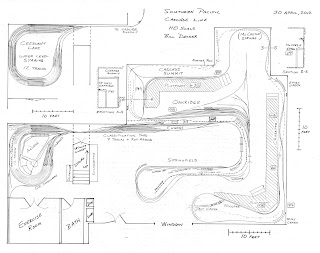 The track plan for the HO scale SP Cascade Line reflects the priorities established for it and the space available.  The highest priority for the layout was to represent the climb over the Cascades from Oakridge to Cascade Summit, supporting manned helper operations.  This immediately presented two design challenges: providing for a long (by model RR standards) mountain climb and locating the pair of locomotive turning wyes (at Oakridge and the Summit).

The years of concept definition and notional layout design efforts paid off when the final basement configuration was identified with the house plan.  The notional design efforts often featured a fold-back of the mountain grade along one wall.   The actual Cascade Line provides just such a feature as the line makes a large “S” configuration of about five miles length near the middle of the climb.  Fortunately, this track feature also has an important scenic feature—the Salt Creek Trestle, shown as the inspiration view for this blog as well as its background.  The turn-back curve with the trestle becomes a major scenic feature of the layout design.  Further, the prototype track arrangement provides ample justification of “stacked tracks”— two levels of the mainline simultaneously in view.

Locating the wyes logically fell to the top nook corner and the next one (central top) over.  Though an early layout design swapped the positions of the two wyes (Oakridge’s being more central in the plan), the final arrangement provided a longer mainline climb and a better passageway around the wye tail.

The length of mountain climb (about 245 feet) provided 40 inches of climb at the prototype 1.8% from the base level.  The base level for Oakridge and the rest of the valley cities was established at 48 inches based on operating experience with a number of layouts, most notably the Cal Central Club layout where I was a member for over three decades.  This base height then established the summit height around  88-89 inches, providing an opportunity for easy passage underneath the summit trackage.   As seen in the image below, Cascade Summit will be built out over the track coming up out of Oakridge, forming an operator “tunnel” for the lower level.  Even my 6’ 4” frame should not be challenged by the modest height under Cascade Summit.  The Summit scene maintains adequate clearance from the room ceiling which is at 9’ 6”. 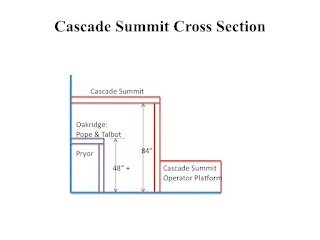 As the layout design process proceeded, it became clear that Oakridge represented a key operating and scenic feature.  The layout plan provides for all tracks present at Oakridge in 1954.  Compromises were necessary, notably in the relative positions of the depot and engine facilities, but the result should operate much as the original during the era of steam helpers.  Flanking Oakridge are the pair of large lumber mills: Pope and Talbot to the geographic east and Western Lumber at Westfir to the geographic west.  Both will be modestly represented, but they should provide lots of work for the Oakridge Turn.

Fleshing out the remainder of the railroad are Springfield and Eugene.  Springfield is contained within a large turn-back loop—a compromise made necessary by the approximately square central layout space.  The design for Springfield attempts to capture major industry located along the mainline.  Also provided is a modest set of tracks representing the Marcola Branch and interchange with the Weyerhauser operation.  The Springfield switcher should be kept very busy!

The design for the layout’s base yard at Eugene provided the greatest design challenge.  The final design represents many compromises, great simplification, and recognition of the top priorities for the rest of the layout.  Modeling Eugene at any time after the Natron Cutoff (Cascade Line) was built could consume more space than the entire basement.  The current design for Eugene features the Eugene depot, an Arrival/Departure (A/D) yard that also serves as open staging, a classification yard (7 tracks plus run-around) sized to serve the modeled railroad (rest of the layout), “City” industry, and engine facilities.  The engine facilities are located inside the reverse loop staging formed by the A/D yard.  They will be accessed via a roll-under chair—one of the toughest design compromises for the entire layout.

Returning to the top end of the layout, reverse loop staging will be provided at Crescent Lake.  This loop will be suspended from the ceiling.  As described for Cascade Summit, the resulting layout structure should provide at least seven feet of clearance underneath.  Crescent Lake staging will have optical position detection and probably closed circuit TV to assist operators.  A stool, ladder or stand will be provided so operators can make a direct observation of their train prior to beginning a descent down the mountain toward Oakridge.

The plan for the HO scale SP Cascade Line should provide for interesting mainline operation and lots of opportunity for individual car movement serving industries both large and small.
Posted by EspeeCascades at 12:32 PM