My railroad and crew are picking up from the disruptions of the past two years, gradually building back to regular operations.  Crew size has been in flux with ups and downs as their availability competes with other events now returning to society.

My fifty-fifth full operating session had a crew of thirteen—enough to man all needed positions, but below my desired full crew goal of fifteen or more.  As has been common this year, several crew members had to bow out in the week preceding the session.  This time it was health concerns as the instructions were made clear to all that if they felt a cold coming on, they should stay home—that often has been a sign of WuFlu developing.

I absorbed the reduced crew numbers with lower staffing of the Eugene Yard complex.  My staging efforts had greatly reduced the need for yard crew action, so the three that staffed the yard complex were able to keep up with the needed work. 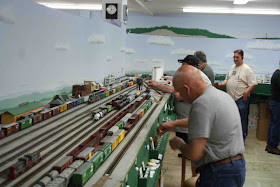 Rick A. (front) served as a “Footboard Yardmaster” at Eugene.  He both managed the yard and worked a throttle for the principal switch engine working the Eugene Classification Yard.  Tucked behind Rick is Dave L. who served as the “Swing Switcher,” working in both the Classification Yard and the Arrival-Departure Yard.  Next in line going back is Mike W. who rejoined the crew after the past two years of greatly reduced operations.  He has the RR-West train on the WP Siding next to the depot, headed out of Eugene.  Finally, Mike L. is bringing in a RR-East train on the Eugene Main. 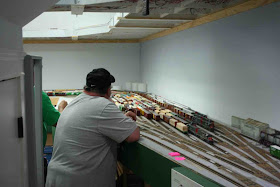 David L. looks on to the Arrival-Departure Yard early in the session.  Several trains are lined up for RR-West departure on the first few tracks on the right while the rest of the yard has car blocks building toward full train length. 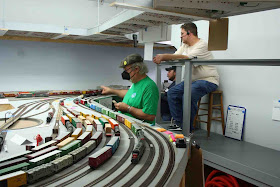 Vic N. served as the “Santa Clara Tower Operator”—my name for the Yardmaster job that manages the Arrival-Departure Yard.  In this photo he is directing Sean VJ who is bringing in a RR-East train to the yard.  Seated above is Mike L. who is awaiting Dispatcher clearance from Crescent Lake—the RR-West end of this layout--overhead. 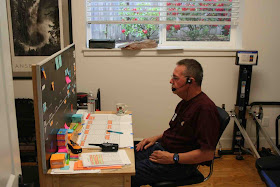 Managing the traffic on the railroad was the ever-steady Dave H.  Dave has regularly filled this role over the past several years.  I really need to make sure others refresh in this position or train up for it.  The small crew-counts of the past two years have forced me to suspend most of the training program which uses mentors. 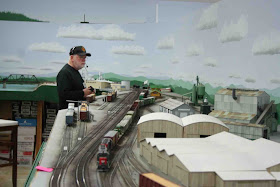 Craig P. ran the Springfield-A job which switches industry at Springfield on the depot side of the mainline in Springfield.  This was one of two local Turns that ran during this session. 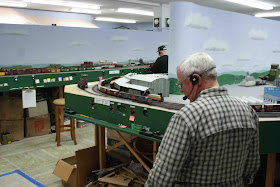 Mike B. guides his RR-West train around the curve at the RR-West end of Springfield. 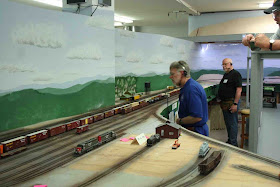 Jeroen G. works the Oakridge Turn, the other local freight for this session.  He is organizing his train for efficient switching.  In the background, Mark K. watches the RR-West train he is helping for the mountain climb. 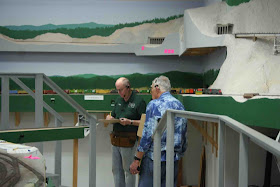 Rodger C. records his block clearance as his train climbs out of McCredie Springs.  Helper engineer Dave. C.  looks on. 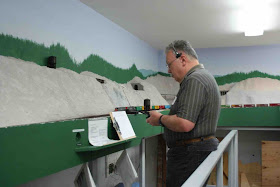 Mike W. organizes to start his train RR-East, downhill, at the start of the session.  I usually have trains left out on the RR at the end of a session.  This provides immediate work for the crew at the start of a new operating session. 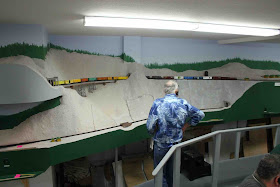 Helper engineer Dave C. watches his train as it climbs out of Cruzatte and over Shady Creek trestle (viaduct). 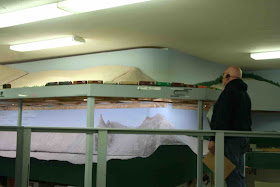 Helper engineer Mark K. watches as the train he is helping pulls into Cascade Summit.  He will cut his helpers out of the train here and then likely return light (just the helper locos) to Oakridge to await another uphill train. 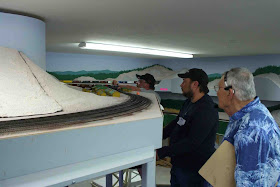 Helper engineer Dave C. and road engineer Sean VJ watch their train as it arrives at Cascade Summit.  The rear of their train stretches in the background.  David L. is railfanning using his phone-camera. 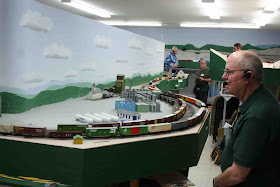 Late in the afternoon, I sensed excitement involving a train leaving Eugene and through Springfield.  As it pulled around the curve at the end of the Springfield peninsula, I realized something unusual was happening.  This was a much longer train than normal.  Indeed, it appeared to have mid-train locomotives—not a normal practice on my RR for this location.  As the train continued to wind its way on toward Westfir, I realized the Santa Clara Tower Operator Vic N. decided to send out a doubled-up, non-clearing train, conspiring with train crews and the Dispatcher.

Long trains such as this were features of SP operations of the 1980s.  With the concurrence of my former SP Dispatcher mentor, my basic operating plan held off on this feature, at least until the crews were familiar enough with the railroad and its operation.  Evidently, my crew decided on their own they were ready!  <Big Grin> 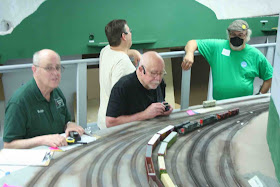 The monster train still required help for the mountain climb.  We chose to add the helpers to the rear end of the combined train, just ahead of the two cabooses.  By now, several of the overall crew were hanging around watching this monster, “abandoning” their posts. 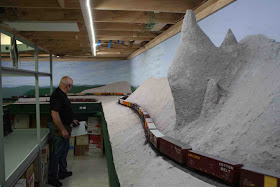 The monster train stretches back past Montieth Rock all the way back into Oakridge, while the head end is in McCredie Springs. 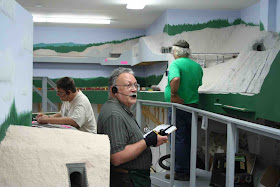 Mike W. controls the head-end locos on the monster train as it climbs out of McCredie Springs.  Vic N. (green shirt) is railfanning the train he created.  Mike L. (left) attends to his duty with a RR-East train getting set to leave Oakridge. 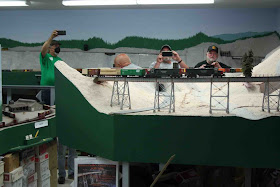 The monster train climbed ever higher, here crossing Salt Creek Trestle.  This brought out the railfans!

The monster train eventually developed motive power issues at Cruzatte—a not uncommon problem for the full-sized monster trains back in the day.  I eventually had to end the fun by breaking apart the two trains to have them proceed independently to Cascade Summit and on into Crescent Lake.  While technical issues with the layout power system defeated the attempt at a full transit of my RR with this train, it did show that both the crew and railroad have matured.